We may earn money from our partners when you click a link. Learn More +
Advertising Disclosure

We believe everyone deserves to make thoughtful, informed purchase decisions. As a result, we provide our top roundup guides and local guides free for consumers.

We may receive compensation from our partners. However, SlashGear independently researches companies, and the compensation we receive does not affect the analysis of our staff.

SlashGear will not include companies on our guides that do not meet our quality standards. The compensation we receive from our partners may impact how and where companies appear on our site, including the order in which they appear.

Whether you lose track of speed easily or just have a lead foot, a radar detector can help save you from flashing sirens and a ticket. The devices are legal in passenger vehicles in all U.S. states except Virginia. We looked at features of different radars on the market and put together a list of our top choices.

Read our radar detector buying methodology to see how we rated each company. 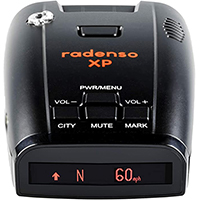 The Radenso XP radar detector features long-range and false-alert filtering. It is sensitive enough to alert you of radar up to several miles away while at the same time filtering out other signals that create false alerts with blind-spot monitoring.

The Radenso XP also uses GPS lockout technology to remember where you received false alerts on routes that you regularly drive. Once you determine the alert is false, you just press a button to add the lockout location. You can also set a minimum speed to mute alerts.

Additional features include a speed camera database, TSR filter for traffic sensors, Ka-band segmentation, multiple-threat display for up to three signals, three modes and VG2 undetectable stealth. It’s not the cheapest on our list — keep reading for models under $200. 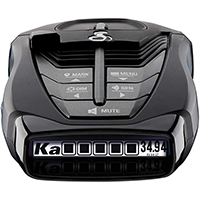 The Cobra RAD 480i features twice the detection range of the previous model. It also features IVT filtering for unwanted alerts, speed and red-light camera notifications and real-time shared alerts from the Cobra community.

The enhanced digital signal processing allows for rapid warnings, and Bluetooth connects you to the Cobra community. You also get millions of user-base traffic avoidance exchanges.

Additional features include front and rear detection, the iRadar app, early warnings and the mounts you need for the windshield or dash. As of publishing, it costs around $150. 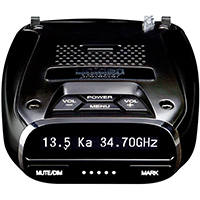 The Uniden DFR7 laser and radar detector has long-range sensitivity that detects all radar and laser guns. It features advanced false-alert filtering and uses GPS to remember common false alerts, such as the automatic doors you see at retail establishments.

The DFR7 also alerts you to red-light and speed cameras via a pre-loaded location database. Firmware updates ensure that the Uniden DFR7 is never out of date. The OLED display is easy to read and features radar band frequency, maximum speed warning and numeric signal strength. It’s a little more than $200 as of publishing. 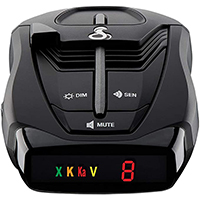 The Cobra RAD 380 laser and radar detector features front and rear detection so you can see what’s behind you. It also features an updatable IVT filter and advanced anti-falsing circuitry that reduces false alerts from vehicle avoidance systems.

Additional features include early warnings via the digital signal processing system, updatable software, a 12-volt power adapter and two ways to mount – windshield or dash. As of publishing, it’s priced under $100. 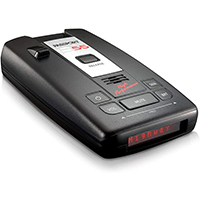 The Escort Passport S55 radar detector analyzes incoming signals and automatically adjusts sensitivity based on whether you are in the city or on the highway. A community of drivers shares alerts for speed cameras, red-light cameras, police radar and speed limits.

Additional features include audible alerts, Ka-band, K-band, X-band and POP warnings and a USB power cord. It’s one of the most expensive models on our list, priced around $360 last we checked.

This model might detect the bumper sensors on Honda and Acura car models, which could trigger a false alarm. If you have a car from one of these manufacturers, consider one of our other top picks. 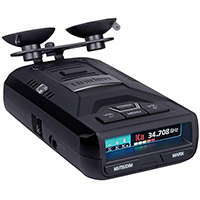 The Uniden R3 is a long-range radar and laser detector featuring built-in GPS technology. It has false-alert filtering and remembers common false alerts caused by other radar products, such as automatic doors at retail stores and blind-spot monitoring systems and collision avoidance systems in vehicles.

This model also features pre-loaded red-light and speed camera locations. The database and firmware update so the alerts won’t be out of date. It also features a multicolored display that makes it easier to read with a glance so you can keep your eyes on the road. As of publishing, it’s priced at $304. 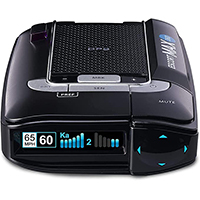 Additional features include five levels of filtering, three driving modes, speed-based sensitivity, Bluetooth connection, cruise alert, directional arrows displaying the location of a threat and real-time speed limit data. Priced around $450, the Escort MAX 360 is the most expensive radar detector on our list.

How We Found the Best Radar Detector Brands

We looked at the features of several detectors, including whether they filtered out K-band, Ka-band and other "noise." We also looked at the range of the radar detectors and whether the manufacturer made improvements from an older model.

*On Amazon, as of publishing date

Bottom Line: What to Look For When Buying a Radar Detector Online

Before you buy a radar detector, research the various products on the market to find the best one for you. Here are a few tips to help you choose the right model.

A radar detector detects these radar waves. It works like a radio receiver. The radar detector looks for a radar signal and warns you when it locates one.

+
Some radar detectors can detect speed cameras, but most rely on a system of a linked GPS and database to warn you of a speed camera in the area.
+
The radar detector needs to be able to clearly scan, so the best place for it is on the windshield or on top of the dashboard.
+
Sometimes. Radar detectors are legal in passenger vehicles in 49 of 50 states, however. Virginia is the one state where the devices are illegal.