It’s a massive day for posts, where even SlashPhone has a fresh blast of news on this pre-holiday day. Lots of sales, lots of products being introduced. And then there was Black Friday. So much Black Friday you’re going to explode! Luckily, we’ve got a column for you by the fabulous Don Reisinger titled Black Friday Is Never Good For MY Tech Addiction. Of course, if you just can’t get enough of the Black Friday goodness, we’ve got a littering of links to sales below plus one list-tastic post by the name of The SlashGear Black Friday Deal Guide of Complete Excellence, an ever-growing post where you’ll not only find a batch of odd sales you almost certainly find listed anywhere else, but a split between offline and online so that you might choose to sit at home and chill or rough it out with the maniacs! Then we’ve got a lone review, one single review for the most amazing Samsung 256GB SSD 470 Series SSD. Stay tough, and be thankful for what you’ve got today (and tomorrow!) on The Daily Slash!

SlashINTERNATIONAL
“U.S. aircraft carrier heads for Korean waters” is not the first thing I wanted to read today when I went looking on an update for the situation unfolding between North and South Korea. If you’re the sort of person who keeps up with these sorts of events, or are at least a person who reads The Daily Slash on a daily basis, you’re aware that yesterday North Korea shelled a South Korean island, leveling a number of buildings and killing two civilians. Today, a U.S. aircraft carrier is on its way over there to… maybe sit around and have a glass of tea. Today the U.S. government expressed its belief that the North Korean aggression was an isolated incident that had to do with leadership change in Pyongyang (N.Korea’s capital), and that it hoped China would use its influence to stop additional “provocative behavior.” Further, Rueters reports:

North Korea said the shelling was in self-defense after Seoul fired shells into its waters near the disputed maritime border. The North’s KCNA news agency said the South was driving the peninsula to the “brink of war” with “reckless military provocation” and by postponing humanitarian aid.

So now the USS George Washington, capable of carrying 75 warplanes and a crew of over 6,000 has left a naval base south of Tokyo Japan and will be joining exercises with South Korea from Sunday to the following Wednesday, so says U.S. officials in Seoul. Read the full story over at [Reuters] and remember when you’re chewing on your roasted bird tomorrow that you should be thankful we’re not in more war than we’re already in and hope, wish, or pray for a peaceful solution to this terrible situation. 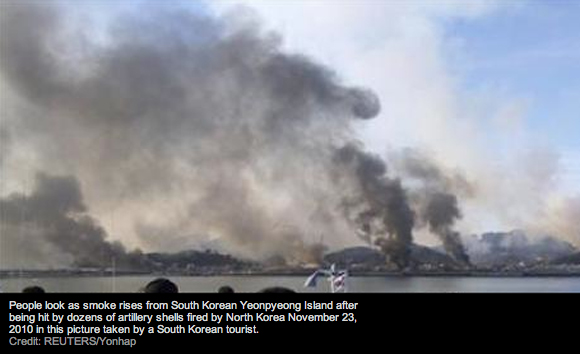