Oh you beast, Acer, you are such a beast. How dare you sillies release a slew of tablets right before a holiday when I’m going to get so much good food to eat? I can’t believe it! But we’ll still write about it. All of it, in a row. Then we’ve got a fancy review of the rough and ready Motorola Defy, a hands-on video of Marvell’s Android tablet, a questioning article pondering designer 3D glasses, and another review on the Droid Pro! Android beats out Symbian in Asia, Skyfire 3.0 launches with Facebook Connect, and our big huge “A Week With” NOOKcolor continues with what might be the most important part of the whole device: reading! All this and MORE on The Daily Slash!

Also World War III may have just started in North and South Korea. No biggie.

SlashAGGRESSION
News from Rueters at approximately 1:22am EST today (November 23, 2010) was that North Korean artillery had hit a South Korean island setting on fire buildings and bringing about return fire from South Korea. This information came to Rueters via Seoul’s YTN television. Reportedly there appeared to be 60 or 70 houses on fire, and the military (it’s unclear whose, probably S.Korea) confirmed the exchange of firing without further details. This story was reported by Seoul bureau for Rueters, Writing by Yoo Choonsik; Editing by Jeremy Laurence. I provide for you here all these people’s names incase this story proves to be massively important or a figment of someone’s imagination. This story comes from Rueters (link below), I’d like you also to take a peek at this screenshot from the Rueters website, paying special attention to the story title in the lower right hand corner. 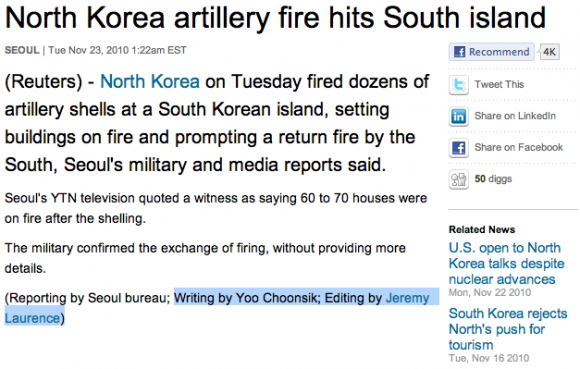