Now that we know what Apple is offering for this holiday season in the iPhone range, it’s time we compare the device (the iPhone 4S) to the most comparable Android devices. This means, of course, that we’ve got to hit up each of the greatest dual-core processor creators for the platform, and with them the latest and best devices running on them. What follows is an exploration of what the best from both of these major players in mobile computing can offer. Let the fight begin! 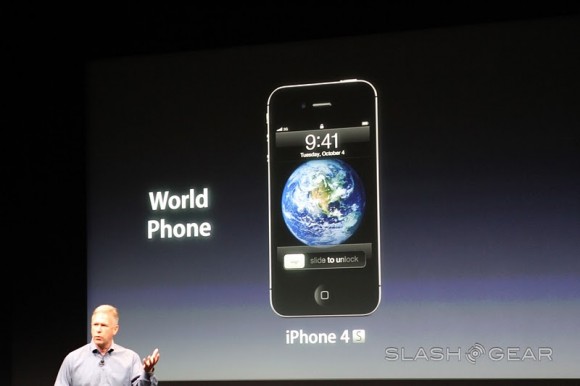 This is the newest device of the pack, it packing a lovely new A5 chip that, optimized to the max for this one single phone, will allow you to play such fantastic games as Infinity Blade II – see a preview of what’s to come in our review of the first in that series of games for iPad 2. This device will be released worldwide and on three of the four major US carriers this month in three models, the least expensive of these being $199 with 16GB storage inside. Some other nice neat new apps revealed at the iPhone event on October 4th were Cards physical greeting cards app and Find My Friends for GPS tracking of all your best buddies. There’s also some little additions to the iPhone line via iOS 5 like the camera shortcut on the lockscreen. Then there’s some real strange things like: Bluetooth 4.0, the lovely fingerprint-resistant oleophobic coating on both the front and the back, three-axis gyro, and again, a global release on 100 carriers worldwide.

Learn all about the iPhone 4S in our full reveal guide as well as our hands-on look. 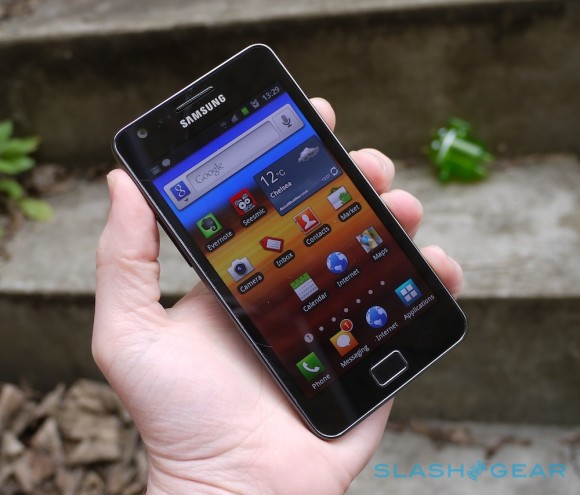 The Galaxy S II is one of the most popular Android devices in history. It’s sold over 10 MILLION units worldwide of its original version, and the new versions on AT&T and T-Mobile plus the EVO 4G Touch version are set to be massive sellers as well. This device runs the newest version of Android – as all the Android devices on this list do, but with a special user interface Samsung calls TouchWiz. This interface is the most updated version of what Samsung calls its most optimized interface for users using Android -and it’s quite nice, if I do say so myself, having one in my pocket right this second. Instead of working with the Apple Appstore, you’ll be using the Android Marketplace, one of the most popular app stores in the world after the Apple app store which, if I’m not mistaken, is still beating every other store by a longshot for legitimate checked-and-ready apps. The Samsung Galaxy S II comes in many shapes and sizes but, for the most part, always has the lovely Super AMOLED Plus display, Samsung’s sharpest and brightest in the world. This device comes with an 8 megapixel camera on the back, similar to the 8 megapixel camera the iPhone 4S is using, and another webcam-ready camera on the front, also similar to what the iPhone 4S is using.

This device, as is true of each of the other Android devices on this list, is a powerful choice, and will last you the 2 years you’ll have it on contract unless you’re the sort of person that always needs the most advanced handset around. For you I recommend not purchasing a smartphone at all, as sure enough, several months down the line, no matter what you’ve purchased, you’ll have been trumped by the newest technology. 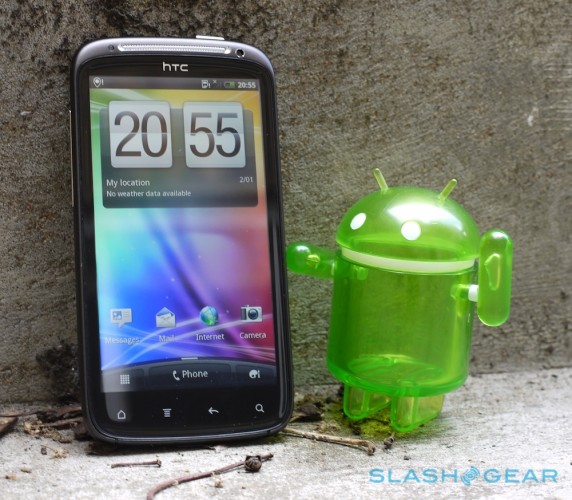 The device known as the HTC Sensation is the culmination of HTC’s efforts to create the perfect phone, similar to what Apple has done with the iPhone and Samsung has done with their Galaxy line, here is where HTC puts it all on the line. You get nearly the newest version of HTC’s custom user interface Sense (currently only beat by the feminine device HTC Rhyme at the moment) and the most comfortable shape for a handset that your humble narrator has ever felt hit his palm. It’s shaped to please, ladies and gentlemen, and like the last two devices, this smartphone has the 8 megapixel camera on the back and a webcam-ready camera on the front.

Unlike the previous two devices, this smartphone is only available on T-Mobile here in the USA and on a broader market internationally. HTC generally releases their devices across the sea first, bringing them then to the USA market on one carrier at a time. Prices for this device are, once again, comparable to the first two smartphones. 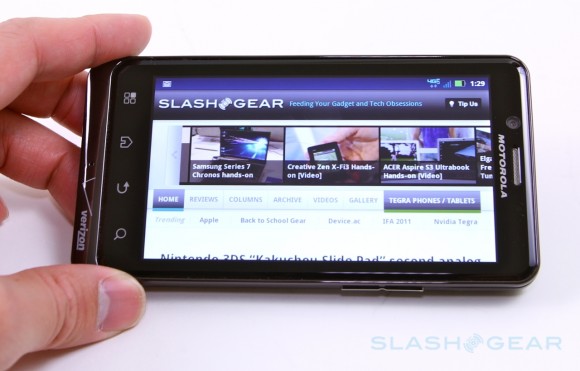 The BIONIC is another dual-core device (like all devices on this list), this time in a device that also works on Verizon’s 4G LTE network. This is the only device on this list that can say that it’s got those kinds of upload and download speeds, and it’s also one of the most widely anticipated Android devices to have been released this year. It’s running Motorola’s newest UI over Android and is pushed as a device that can accomplish many things with its several docks and desktop-mode for advanced computing beyond that of a normal smartphone. Apple made fun of the camera on this device because it is said to be significantly slower in taking photos than the competition, meanwhile it has a similar 8 megapixel camera on the back and video chat capable camera on the front.

The DROID BIONIC is only carried by Verizon, and only here in the USA. This makes the device by far the smallest in distribution numbers, but does offer an exclusive sort of feel, if you know what I mean. It’s also got a bit of a curve to the edges of the glass, this making it, the G2x, and the Sensation each part of the curved Gorilla Glass club – strength and a lovely feel. 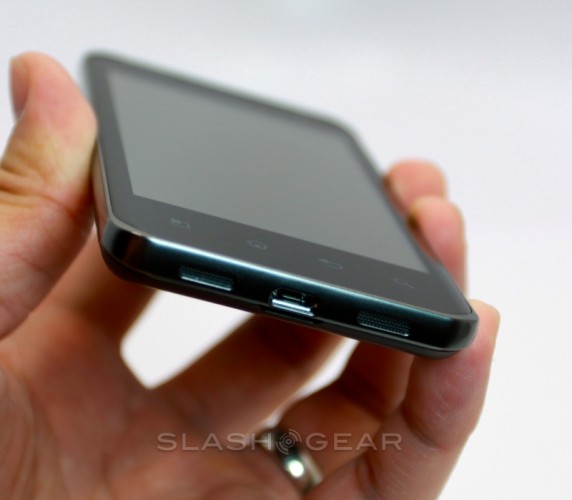 The LG G2x is, in its original form, the first smartphone in the world to hold a dual-core processor in it. It was called the Optimus 2X then, and it, like I mention above, has one of your humble narrator’s favorite display glasses in the world – a couple of large bends and this device is unique. Inside you’ll find the second most advanced Android operating system out of the box, but it’s instantly ungradable to the newest Gingerbread – as all the other Android devices are on this list. This device has the 8 megapixel camera on the back and the video chat capable camera on the front, and, like the DROID BIONIC and the Galaxy S II, has the ability to play videos via HDMI on your big screen HD TV. The iPhone 4S can do this in a similar way to the Galaxy S II, both of them requiring a special converter cord to do so.

Since the Apple processor and the rest of these Android-powering processors aren’t able to all really work on the same benchmark tests, we’ll just have to speak on what we’ve seen here. A dual-core processor on an Android device makes it capable of wiping the floor with all of their single-core counterparts, but unless you’re really ramming away on video and playing the highest-tech games, you’ll not notice a WHOLE LOT of difference in your daily activities. If you’re going to be using your device to play videos through your TV, it’d make a lot of sense to have a dual-core processor. If you’re going to be playing games like Riptide GP for Android, you’ll absolutely NEED a dual-core processor because it requires it.

That said, different processors are doing different things to pump themselves up for consumers – Qualcomm – whose chip sits in the HTC Sensation, recently announced their support for game developers in the Qualcomm Snapdragon Game Pack. Similarly, NVIDIA has a whole NVIDIA Tegra Zone of apps created with the developers to work specifically with their own Tegra 2 dual-core chip – these games are then only playable on NVIDIA-powered devices, including the G2x. Texas Instruments (on the DROID BIONIC) have been finding their way into several big-name devices of late including the Kindle Fire and is rumored to be part of the next Google hero phone Nexus Prime. Samsung sits in this pack with their own Exynos dual-core processor on the Galaxy S II – this processor has been known to beat out competing dual-core processors on benchmarks that are, admittedly, not that precise, but by a LOT in some cases. Finally there’s the A5 dual-core processor from Apple for their newest iPhone 4S, this is a processor that’s quite similar (if not basically identical) to the A5 processor sitting in the iPad 2, the most popular tablet-type mobile device in the world – and by the looks of it, it’ll be at least keeping up with the competition if not beating it due to the small library of devices it must be optimized for.

Anything else you’d like to know? You can see the full specs on the iPhone 4S by heading to our iPhone 4S Hands-on post, then for the rest you can see our http://device.ac/ device archive for the rest: Galaxy S II (AT&T and original), Galaxy S II Epic 4G Touch, LG G2x, DROID BIONIC, and the HTC Sensation. Let us know which one you’ll pick if you’re in the market!