Let us go forth and review an app made specifically for the Apple mobile platform iOS – this particular update coming hard and downloading fully optimized for iPad 2. This is a game that, in a way, takes everything we learned from games like Final Fantasy, Virtua Fighter, and even the non-video game Dungeons and Dragons, and breaks it down to a touchscreen-based, mobile operating system … masterpiece. It’s not the greatest game ever made, and I’ll give you a little preview in saying I don’t even think I’ll play it more than a few times, but is it worth the cash you could potentially lay down on it?

This game fires up to show several brand names that spell out “this is going to be amazing almost no matter what.” EPIC Games, UDK, ChAIR, and the mother of them all, UNREAL Technology. We’ve just reviewed a couple of games for the Motorola XOOM that had UNREAL involved, and oh my goodness let me tell you that we’ve essentially now GOT to crack our claws out for any new game that comes along associated with them. They’re good. 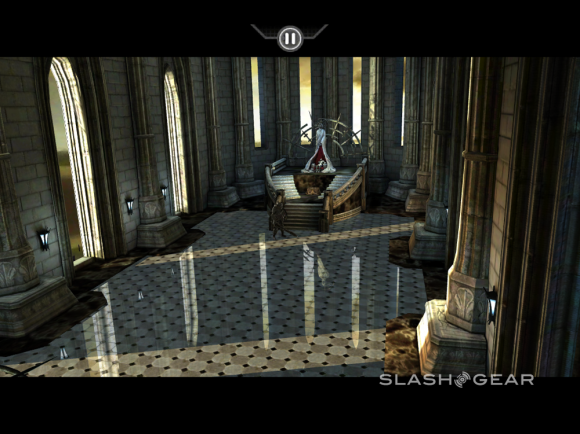 As this game fires up, it rolls past the start screen, hitting almost immediately the playing of the game via just a tiny bit of training. A mistake many games have been making in this transitional period with mobile gaming is to move a game that was on a console or otherwise larger system here to mobile without changing it a bit. You’ve got to make it work FASTER, because that’s what a mobile gamer not only expects, it’s what he or she needs. This game knows that, and it knows it hardcore.

The game launches instantly into a storyline and cinematic that are complicated enough to be engaging but simple enough that you don’t have to CARE what’s going on to play the game.

This game consists of walking a distance, seeing if there are any items about your feet for picking up, making sure your health and person are up to snuff, and fighting. Fighting in this game consists of tapping and swiping across the screen, not unlike what you’d be doing in Fruit Ninja, but here with a level of complexity that again achieves a perfect balance. The balance is between response time, intricacy, and entertainment value. This fighting system has enough moves and advancements in moves as you move through the game that you will not become bored. This fighting system has a response time that, while not 100% perfect, is the best you’re going to find on the iOS platform. This fighting system allows you to hit, cut, dodge, parry, block, use magic, use special moves, and more and more as you move along and gain experience. It’s entertaining every single time you fight. 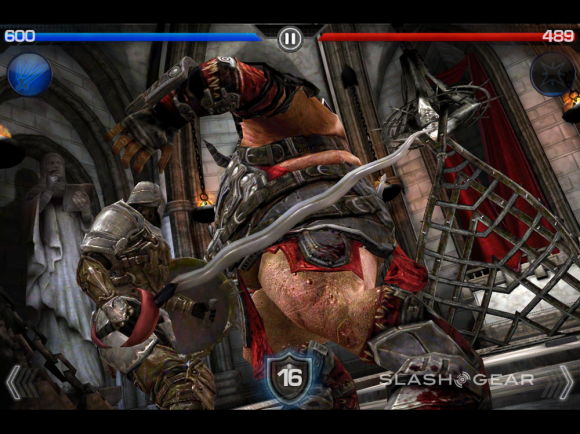 The story here is that you’re a warrior whose father has been killed by this evil warlord. You need to go into the castle where your father war murdered (20 years earlier,) and beat your way through a series of monsters until you reach the head villain whom you must also kill. The first time we went through the game, it took about 20 minutes to find the throne room, and we scored a single hit on the head bad guy. He murdered the crap out of us instantly afterward. Once you die, at least by his hand, your quest begins again, but not as you, as your son. We’ve only done this a couple times so we assume it’s always a son, and the story always goes that it’s 20 years later once again. Your son, since he’s in your bloodline, inherits not only the power and experience you had when you died at the head of the top boss, but your gear as well. This isn’t the first place in the story where you’ll be questioning logic, and it’s not the last, but if you accept this oddness, you’re going to have one whole heck of a lot of fun playing this oddity of a game. Plus, it’d totally be horrible if you lost your awesome sword after a single death! 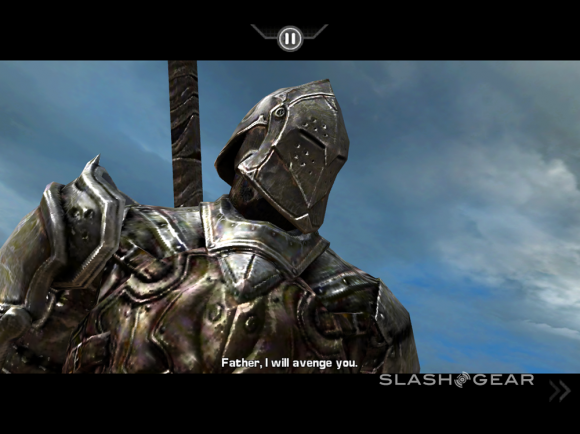 While I write this review, this game costs a total of $5.99 in the app store, and I personally have only tried it out on the iPad 2. It looks and acts like it’s the best game ever made for the mobile platform, and feels like a game whose format I and we have never before experienced. It’s a winner. It’s worth the $6 if only to experience this new format of game and learn what’s possible for the future. Plus there’s some unbelievably freaky monsters in here you’ve just GOT to witness.

Go buy the crap out of it [here]