We’re now a few days out from the first big impact of Android 4.0 Ice Cream Sandwich as it’s launched formally with the Samsung Galaxy Nexus in Hong Kong, China, and here we’ve got a complete wrap-up of the events and the waves that’ve come after. First we’ll get down to brass tacks on what it feels like to handle Ice Cream Sandwich and the phone Google has chosen as it’s hero device to run the system without any sort of modification from the manufacturer on top of it. Then there’s a few comparisons that need to be made – both to the top device at Apple, the iPhone 4S, and the alternate hero device from Samsung, the Galaxy S II. Devour it all here!

First before we get into looking at the new mobile OS and the device that’ll carry it first, check out the info on where you’ll be able to get both here in the USA first: Galaxy Nexus confirmed for Verizon 4G LTE, plus some UK and Japan (and perhaps more carriers a bit later) – guaranteed for some miraculously high sales, just like the last Google hero device, the Nexus S running Android 2.3 Gingerbread. There’s the Motorola XOOM running Android 3.0 Honeycomb in this equation too, but since the tablet-based Android hasn’t quite sold at the same level as handsets (not nearly as well, when it comes down to it,) your humble narrator would certainly make a sort of divergent timeline for that. What we’ve got with Ice Cream Sandwich, that is Android 4.0, which combines the great bits of both Gingerbread and Honeycomb, creating a “sandwich” of a system for the greater advancement of Android.

Above you’ll see our first real look at Android 4.0 as it exists on the Galaxy Nexus. This hands-on will show an assortment of features in the system, but more than that, it shows how speedy and efficient the system is on the hardware Google intended it to look best on. This operating system is meant to be able to work on any sized display, regardless of if it’s a tablet, a smartphone, or anything above or below. For the full rundown of everything Ice Cream Sandwich offers, head to the Android 4.0 Ice Cream Sandwich complete guide as written by yours truly. Then there’s the device we’re looking at this with — the Galaxy Nexus.

Above you’ll get a look at the Galaxy Nexus, a Samsung device, as it existed on the 19th of October, 2011, in Hong Kong. The final build for this device (and Android 4.0) will certainly be almost identical to what we’re seeing here, but it’s always important to point out that these aren’t final just incase any bugs are found. Thus far no bugs have been found, none in the least. In fact, both Ice Cream Sandwich and this Galaxy Nexus device appear very much to be a fairly ideal combination of smartphone and Android operating system.

The first place one might look in any operating system for a mobile device these days, especially on a device like the Galaxy Nexus that’s supposed to be the ideal formation of device and system, is at the camera. In Ice Cream Sandwich there is a massive update to both Gallery and Camera, and that this is meant to work well on the Galaxy Nexus, and since we also know the recently announced Apple iPhone 4S (sporting the new iOS 5 mobile OS) to have an updated camera as well, Vince filmed a quick test of how quick the cameras appear to be able to take photos in comparison to one another. Have a peek at that test here:

Then there’s the bigger comparison of the two, the hero for Apple and the hero for Google (and Samsung) in the iPhone 4S and the Galaxy Nexus. While the update in Apple keeps the majority of the hardware of its last hero, the iPhone 4, one must note that the much larger update comes between the Nexus S and the Galaxy Nexus. First of all the display is both physically larger and contains many more pixels, then behold a wholly new chassis, where before there was a curved hard-plastic backing, now there’s soft-touch plastics and metal. This is easily one of the nicest full builds on an Android device to date. Have a look below at a video of the iPhone 4S and the Galaxy Nexus being compared in hand, again in Hong Kong on the 18th of October, 2011.

Samsung presents this device as the next step in the evolution of the ideal smartphone, but continues still to lead their pack of Android devices with the Galaxy S II. The original Samsung Galaxy S II appears both in the image below this paragraph and in the gallery below photographed next to the Galaxy Nexus in a variety of ways. The Galaxy S II still runs Android 2.3 Gingerbread, but certainly won’t be far from an update once Ice Cream Sandwich is released into the wild in late 2011/early 2012. As for the innards, both devices run a dual-core 1.2GHz processor, the GSII running an Exynos (Samsung) processor while the Galaxy Nexus runs an OMAP4 (Texas Instrument) processor. The display size on the Galaxy Nexus is 4.65-inches at 1280 x 720 pixels and is what Samsung calls a Super AMOLED HD, while the Galaxy S II has a 4.27-inch display at 400 x 800 pixels and is a Super AMOLED PLUS. You’ll have to decide for yourself which seems the most well suiting. 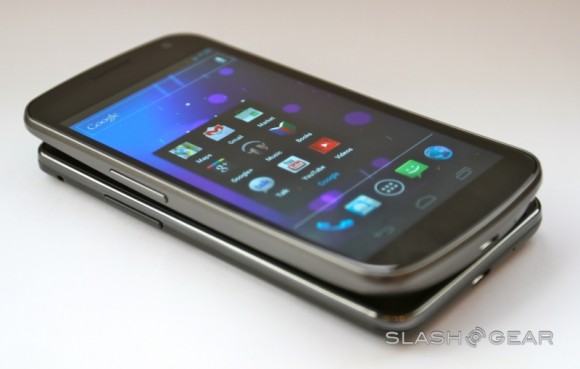 You should also note that these numbers are only counting the original international version of the Galaxy S II as reviewed by Chris Davies and doesn’t take into account the several different iterations of this device in the USA and the expanding portfolio around the earth – GSII from AT&T, Epic 4G Touch, and GSII from T-Mobile each have their own unique set of specifications. That said, they’re all relatively similar to the original. That said, the original and the Galaxy Nexus compare in size as well, though the curve in the Galaxy Nexus makes a big difference. The Galaxy Nexus is 5.33 x 2.67 x .35 inches and weighs in at 135 grams. The Galaxy S II original is 4.93 x 2.6 x .33 inches and weighs in at 116 grams. 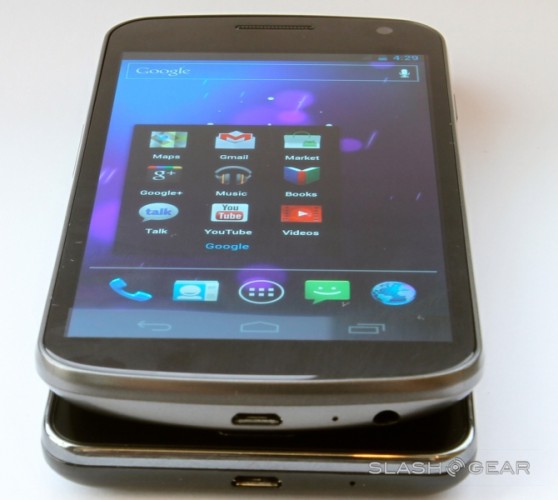 After that it’s all details, details, and more details from the Hong Kong event. The same day as the event we found out that the name Nexus Prime was made up by the team at CyanogenMod 7, and the Galaxy Nexus was revealed officially right at the starting bell. The same was true of the Android 4.0 Ice Cream Sandwich final build, and the launch date for the Google Nexus as well as a slew of details were shown in kind. We found out about the new Android 4.0 core apps, and the new Ice Cream Sandwich UI was revealed for the first time. We found that the Android 4.0 SDK was available immediately, and that the Galaxy Nexus homepage was alive and kicking. 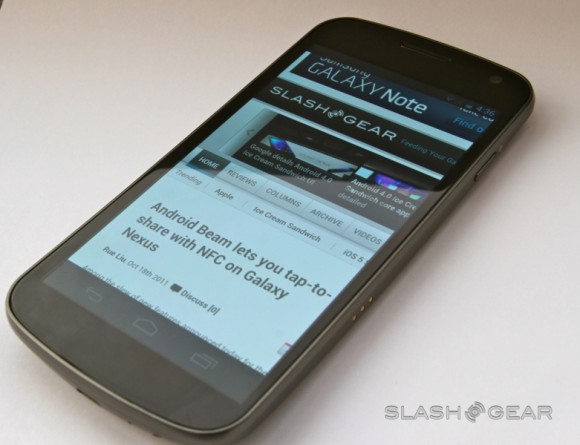 There was a rumor of the Galaxy Nexus being designed to avoid Apple that was almost immediately denied by Samsung’s Won-Pyo Hong. Then take note that there was another hero device announced this week – Motorola’s DROID RAZR – one that we got hands-on time with and one that’s been all but guaranteed to get Android 4.0 Ice Cream Sandwich in early 2012. But what about tablets? The ASUS Eee Pad Transformer 2 is likely to be the first tablet with Ice Cream Sandwich.

Stick with us here on SlashGear for everything Android 4.0 Ice Cream Sandwich and Samsung Galaxy Nexus as we cover them both in-depth throughout their entire life-span – 2011, 2012, and beyond.