Facebook may refuse to deliver what the rumor-mill wants – an own-brand smartphone to take on the iPhone – but that’s not to say it isn’t following a cuckoo-style mobile strategy, progressively infesting handsets from other vendors. The company’s new free voice calling service, quietly revealed in the aftermath of the Facebook Graph Search announcement, is the latest in a growing suite of mobile products that, while lacking the eye-catching appeal of a glossy slab of hardware, nonetheless shows that the social network finally has a mobile strategy.

Before the free voice calls, there was voice messaging in the Facebook mobile app, and before that Poke, which sends time-limited text, photo, and video messages that auto-destruct and warn users if the recipient attempts to save them. Dubbed Facebook’s “sexting app” it had an early stumble after being found to secretly cache concent, though the social site did quickly move to patch the bug.

Then there was Nearby, a Foursquare-style location service, and just ahead of that Photo Sync, to make it even easier to suck photos from your phone to your Facebook gallery. That’s not to mention Facebook’s $1bn grab of Instagram, despite the fact that it had just pushed out its own Camera app which replicated most of the features of its expensive acquisition.

Facebook is seldom first to offer each mobile feature. Poke was the most obviously “inspired” product, closely following in the footsteps of earlier app Snapchat, but Google has been offering free voice calls in the US for some years now, through its Gmail voice system. (That Google deal has again been extended, now covering 2013.) Facebook Camera’s similarity to Instagram and Facebook Messenger’s overlap with the huge number of IM apps – whether iMessage, GChat, WhatsApp, or even good old fashioned SMS – hardly portray the social site as the most innovative of companies.

Then again, arguably it doesn’t need to be. Facebook isn’t some naive, cash-strapped startup desperate for attention and users; it’s a multi-billion dollar business with a vast user-base much of which, despite periodic outcry and calls for mass defection, shows high degrees of addiction.

Where its been struggling is in making the most of its mobile users. That’s not the same as acquiring mobile users – in fact, Facebook has plenty already, it just hasn’t been too hot at extracting some sort of financial return from them. CEO Mark Zuckerberg has fingered commerce as one potential option, but right now everything about Facebook’s mobile suite reeks of lock-in – making users keep using Facebook, and for an increasing proportion of their everyday mobile activities – rather than revolution.

Viewed in those terms, spreading itself across the common applications regularly demanded of a smartphone (calls, messaging, photo and video sharing) makes perfect sense for Facebook. A mobile commerce push would fit in with that nicely, though we can maybe excuse Facebook for not being there yet: few manufacturers, vendors, or carriers have got commerce quite right yet. 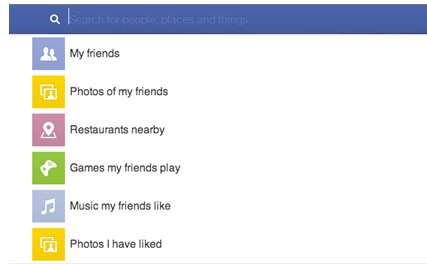 What Graph Search might do for Facebook’s mobile strategy, however, is give it an all-important injection of context. Your friends and family are arguably the best recommendation engine you know, and if they don’t know the answers themselves, they may very well have “Liked” the sites, reviews, and other sources that do. Context is another area no company has nailed so far, though Google Now is perhaps one of the better approaches we’ve seen.

There’s plenty that’s been said about the importance of controlling the hardware and the software you offer, if you want to succeed in today’s mobile market. That, we’re told, is what gives Samsung sleepless nights over Android, gives Apple its edge with the tight integration of iOS and iPhone, and what Nokia has sacrificed in throwing in with Microsoft and Windows Phone. Is it not more important, though, to own the users themselves? To have a platform considered so essential, so integral to their everyday lives, that users shape their device and service shopping lists on the basis of who supports it?

Facebook could still screw up: the mobile industry moves fast, and while that makes for interesting times both as a consumer and a company, there’s little space for second-chances if you get it wrong. For all spreading itself across dozens of apps, numerous services, and a handful of platforms might not satisfy in the gut like a Facebook phone might, though, like the cuckoo chick stealing warmth, food, and ultimately attention in a foreign nest, a strategy based on mobile inclusion is just what Facebook needs.