All the silk has all been officially slipped, the cars are under New York’s bright lights, and automakers from around the globe have turned out to take a last opportunity — at least for a few months — to showcase their most recent efforts on a grand stage. While New York springs to life with the thawing temperatures, inside Manhattan’s Javits Center has been a hive of activity, as well. Our team was on the ground and we’ve got all of the highlights of what went down during the press days, and if you can’t make it to New York, our extensive galleries, coverage, and videos are the next best thing, maybe even better.

The list of Godzilla lovers is long, and the Nissan GT-R has made quite the impression on the performance and enthusiast world the last eight years. So when we heard Nissan would debut a new GT-R, our interest was piqued. 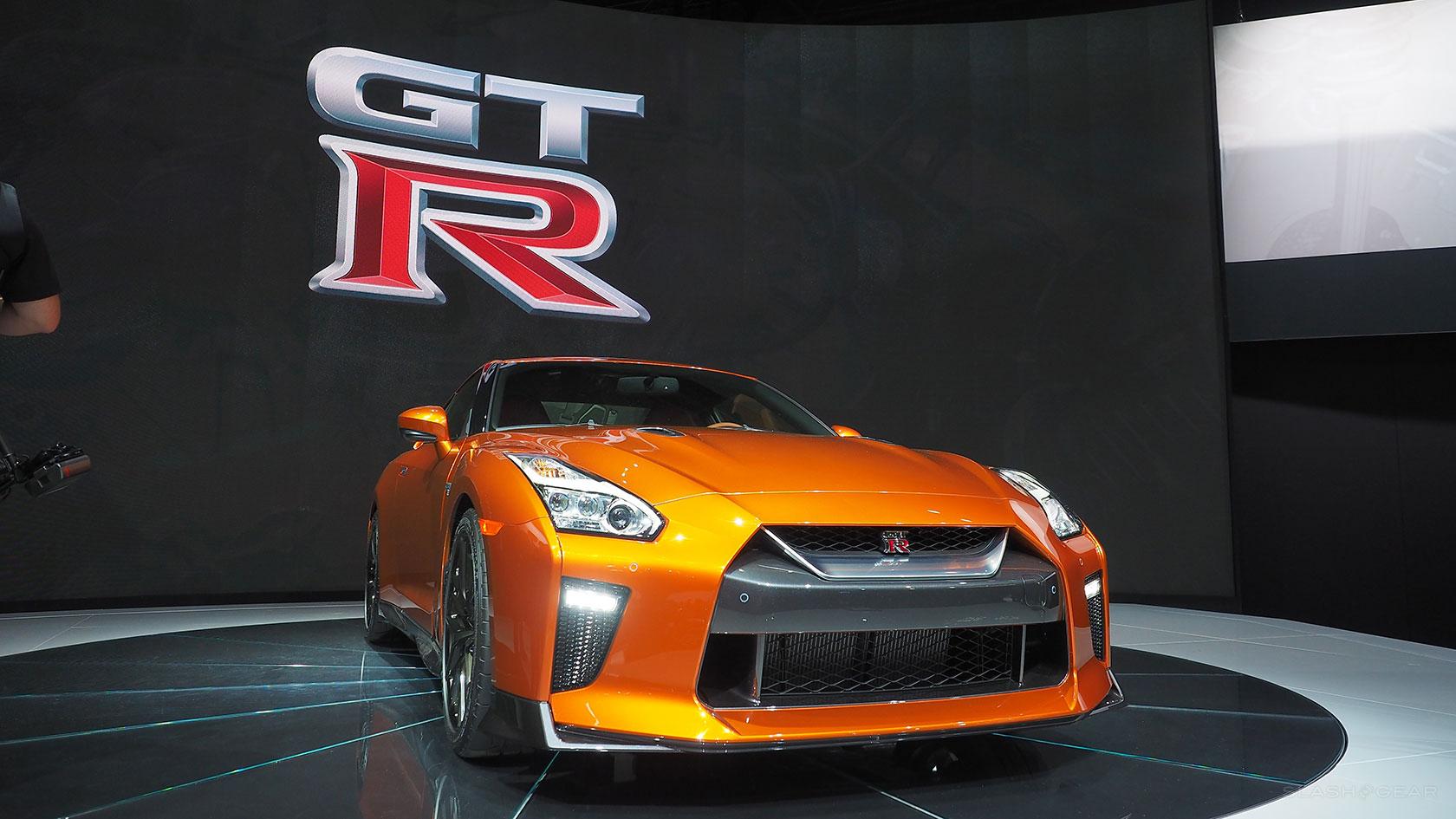 While not quite the dramatic new car we were expecting, the updated 2017 GT-R at least moves the needle in the right direction, and at this point, any change is welcomed, and should keep GT-R enthusiasts engaged. More power is a good start, the GT-R’s 3.8-liter twin-turbo V6 is now good for 565 hp—an increase of 20 hp—and 4 lb.-ft. more, with that torque figure up slightly to 467 lb.-ft.

The ranks of the 200 mph supercars are few, but Jag’s first Special Vehicle Operations car arrives in a big way. Making its North American debut in NY, the Ian Callum-designed, 575 horsepower, 516 lb.-ft. F-Type SVR counts on increased downforce, reduced drag, and that supercharged V8 to enter the territory of the elite. 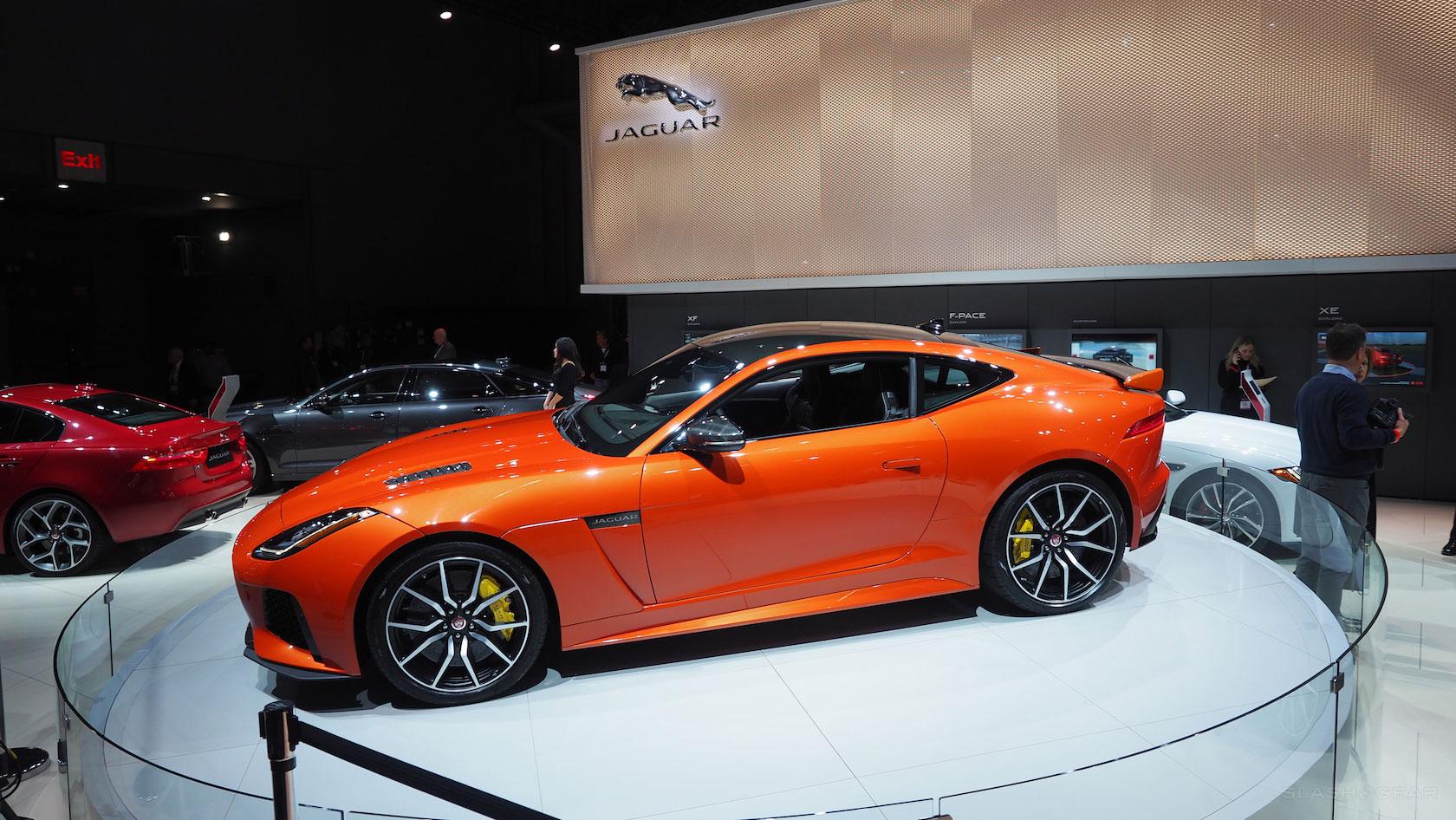 Unique features such an an active carbon fiber wing that extends when the car hits between 60-70 mph, and clever weight savings in areas such as the wheels all make this the most desirable Jaguar in decades.

It was the last car shown off, but if the ‘last but not least’ expression were ever true, it was with the Genesis New York Concept. In fact, Hyundai’s upmarket brand was the only true concept that really explored daring design at the show, aside from Lincoln’s playful gimmicks on the Navigator Concept.

Manfred Fitzgerald, head of Genesis, said the concept embodies the “athletic elegance” that truly characterizes the brand. The interior features a 21-inch, 4K floating and curved LG screen. Genesis tell us the New York Concept hints at some of the design we can expect to see on the upcoming G70, and in our opinion, the more the better.

Benjamin Hunting: “The Genesis New York Concept proves that you can’t risk being caught flat-footed in the luxury segment. Hyundai is serious about targeting the usual premium suspects, and this striking concept should shake things up once it’s styling ideas reach production.”

Toyota kicked the show off with the first press conference, and among its debuts was the Prius Prime, which definitely sounds like the name of a transformer. Prime adds several upscale connectivity features and a sleek new Tesla-like screen. Innovative, or not fully-executed, we can’t quite tell.

But the Prius is big business for Toyota, and America’s preferred fuel-sipping hybrid. While not exactly luxurious, the Prius Prime could represent an interesting expansion of the Prius family. Toyota’s eco credentials were also validated with the Toyota Mirai taking home the World Car of the Year trophy in the Green Car category.

The Lincoln Navigator was once a prized luxury SUV that rivaled the Cadillac Escalade, but while Cadillac continuously did just enough to keep the appeal flowing, the Navigator lost its way. While it’s just a concept — gullwing doors and a staircase indicate as much — the Lincoln Navigator shown at NYIAS shows serious thought is once again going into a nameplate that once was synonymous with super-sized luxury. We’re looking forward to see what the production Navigator ends up looking like. 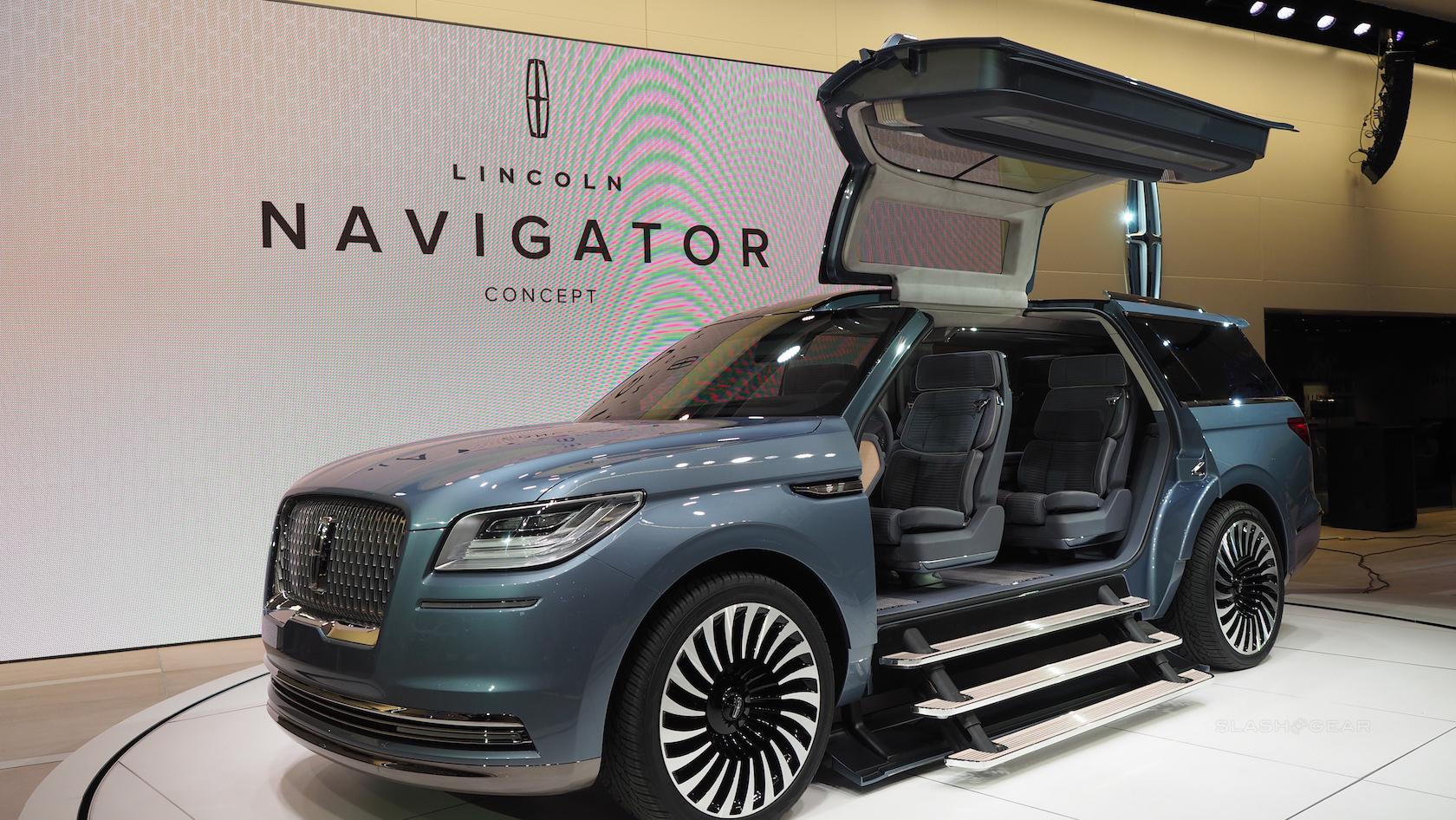 Chris Davies: “Seldom has a company tagline seemed so poorly suited to a car, but then again the Lincoln Navigator Concept is no ordinary vehicle. Still, describing a vast SUV with gullwing doors and an unfurling staircase as “Quiet Luxury” seems more than a little incongruous, but by the time the new Navigator reaches production those more ostentatious elements will have been discarded. Here’s hoping that at least some of the drama makes it through to showroom models, mind, as Lincoln needs a showstopper if it wants to compete with the Escalade.”

Mazda genuinely surprised media this week with the debut of a retractible roof Miata. The MX-5 Miata RF tweaks styling from the current car, adding fastback looks to one of the most beloved cars. 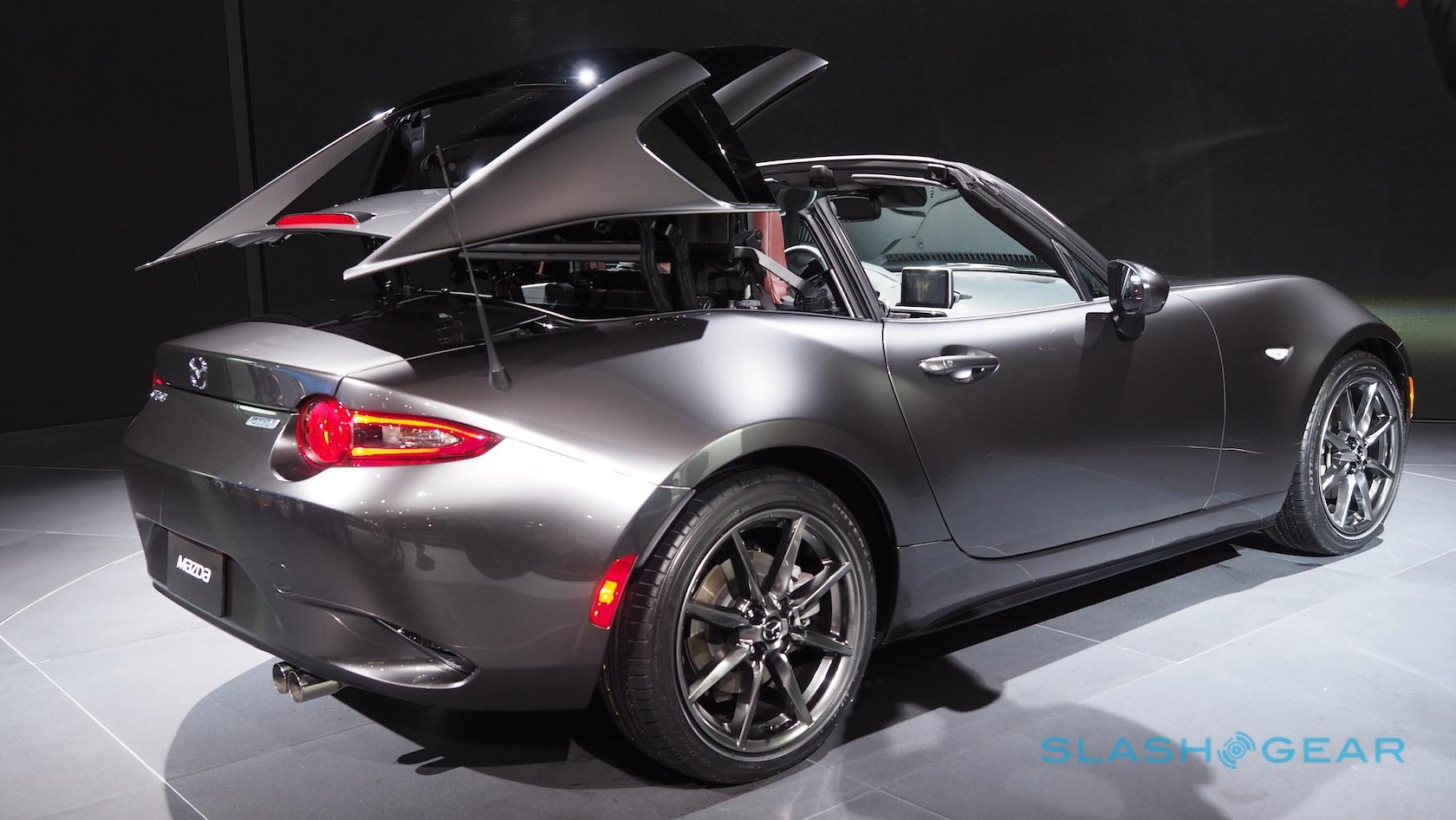 It was a big show for the Mazda Miata, as it was awarded two of the five World Car of the Year awards, including design—beating out a large original field of beautiful cars—and the overall top honors trophy, being named as the WCOTY. Needless to say, it was a big show for Japan’s most fun automaker.

Chris Davies: “When the sensible people at the World Car Awards name something World Car of the Year, you know it has to be good, but frankly it’s only what the MX-5 Miata deserves. Mazda’s plucky little roadster is a star, and now it has a hardtop sibling to share the limelight. With its mesmerizing fastback roof, the Miata RF is a Porsche Targa on a budget, even if we need to wait to see whether the extra gadgetry unduly adds to either performance or price.”

Benjamin Hunting: “The Mazda MX-5 Miata RF manages to satisfy 2 different customers at the same time, and is as close to Miata coupe as we are ever going to get.”

There seems to be no end to the variants and choice for consumers, and Mercedes proved that with four new cars and a facelift to the entry-level CLA. Two of the cars that represent the top of the vehicle line in their respective families (for now). The Mercedes-AMG C63 Cabriolet and C63 S offer AMG’s 4.0-liter V8 engine, tuned to 469 hp and 503 horses respectively, while also giving drivers the vitamin-D packed allure of a convertible. 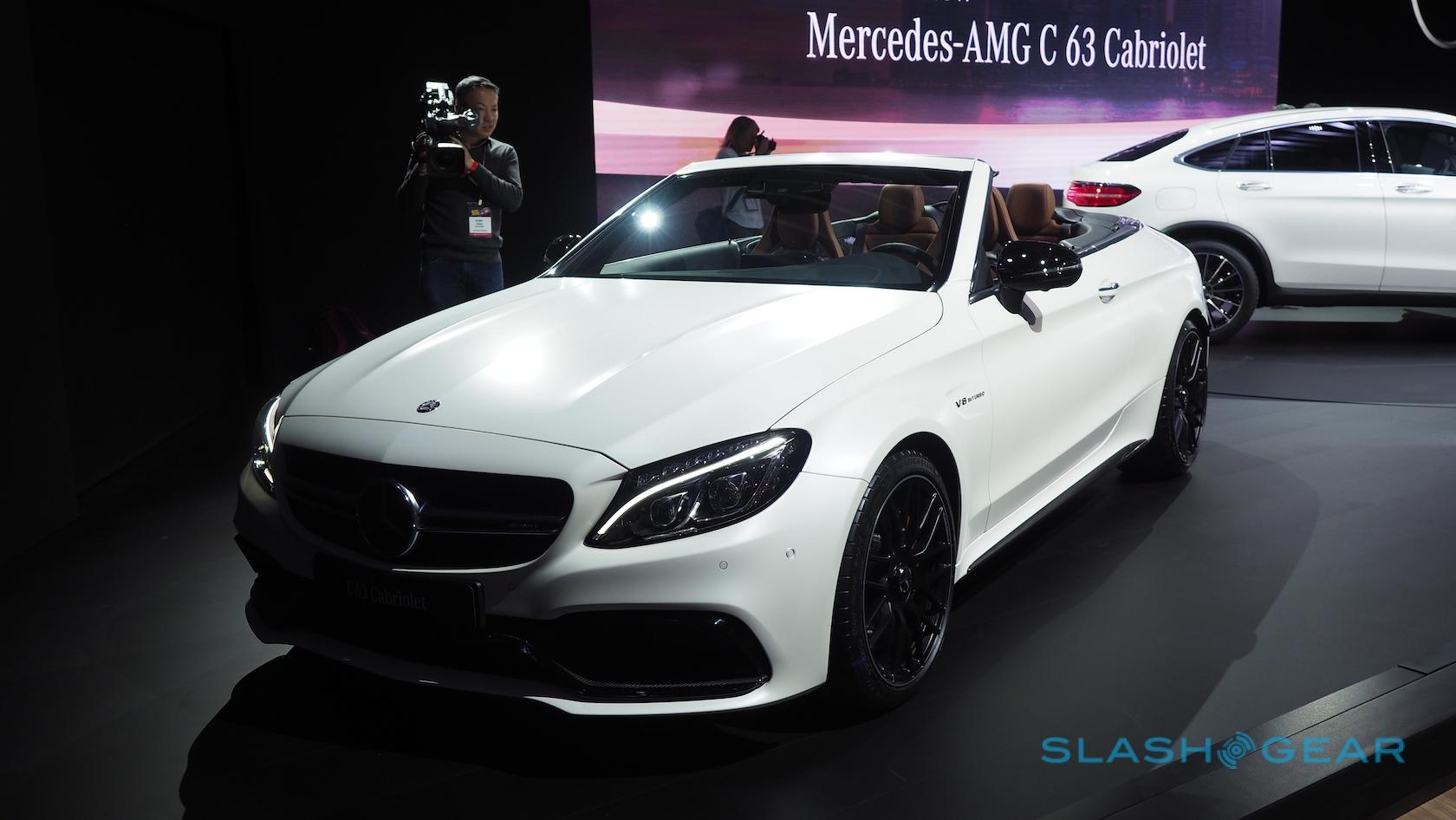 What better time to show of these cars than at the start of spring? Both will hit 60 mph in about 4.0 seconds—the S trim is a tenth quicker—and both feature a unique exhaust that utilitizes the latest in flap technology. Given what we’ve experienced on previous AMG cars, we’ll take their word that it’s going to sound good. 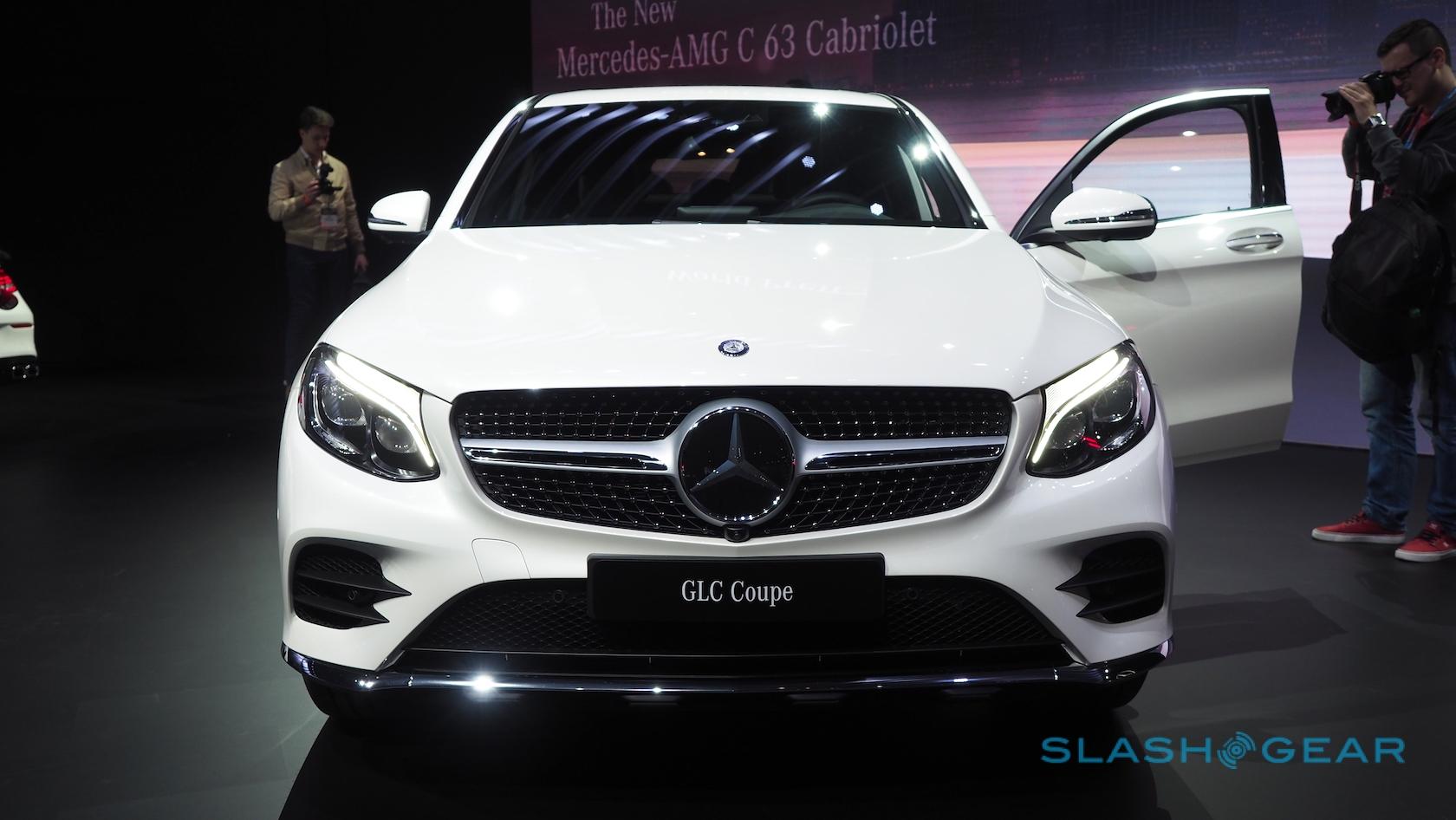 That’s not all. Germany has “coupe” SUV fever, and in Benz’s case the GLC is the latest to get the new silhouette. It works on the GLE Coupe, and it might even fit the smaller GLC more. The GLC300 4Matic Coupe comes with a bevy of standard equipment, including a standard sunroof, power liftgate, and that beautiful C-Class interior that we’re quite fond of. Both the 2.0-liter turbo-four and the Biturbo V6 in the GLC43 are mated to MB’s new nine-speed automatic transmission.

Some things, you just can’t plan. Months ago Audi decided the 2016 New York Auto Show would be the right time to show off the R8 Spyder we knew was coming, and at this same show, the Audi R8 takes home the Performance Car of the Year trophy at the WCOTY awards. 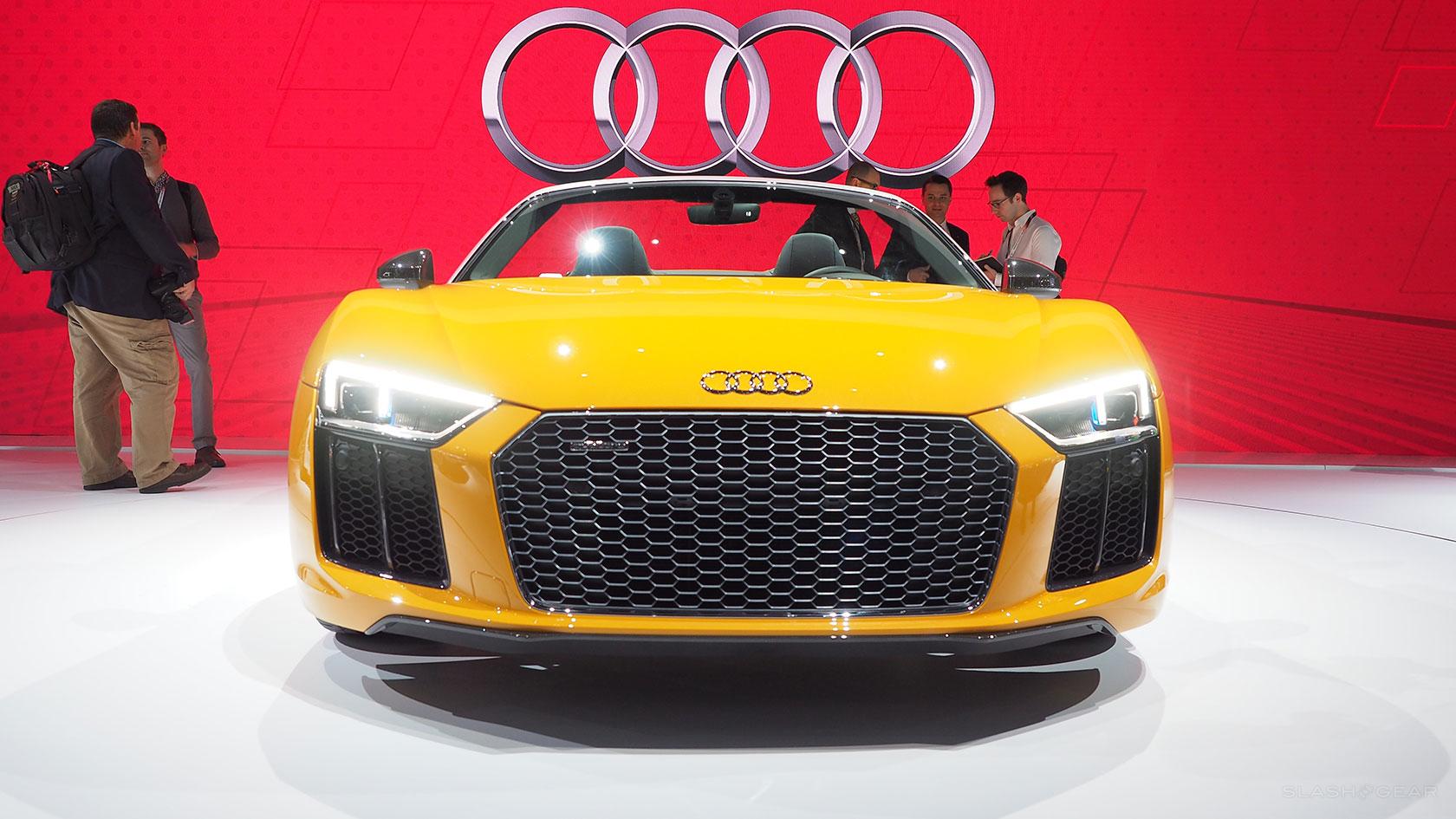 For now, the drop-top will be mechanically similar to the 540 hp V10, no word on when the 610 hp V10 Plus version might come, or if it will at all. As far as we’re concerned, the more R8s in the world, the better for us all.

Chris Davies: “Usually, when you lop the top off a sports car, you dilute performance in the process. Credit Audi with Germanic zeal, then, for making sure the R8 Spyder lacks none of the potency of its coupe brother. Stiffened for less twisting and more cornering skill, and still getting the unmistakable V10 soundtrack, you have to ask yourself whether losing the roof isn’t in fact just what the everyday supercar was intended for.”

BMW M760i xDrive and Alpina B7

In another confusing (in a good way) showing, BMW brought two examples of its plush 7 Series sedan to North America for the first time, with the M760i xDrive, and B7 Alpina. Both cars are rated at 600 ponies and count on turbos, but the M760i xDrive employs a 6.6-liter 12-cylinder, while the B7 Alpina opts for a smaller mill, the 4.4-liter V8. 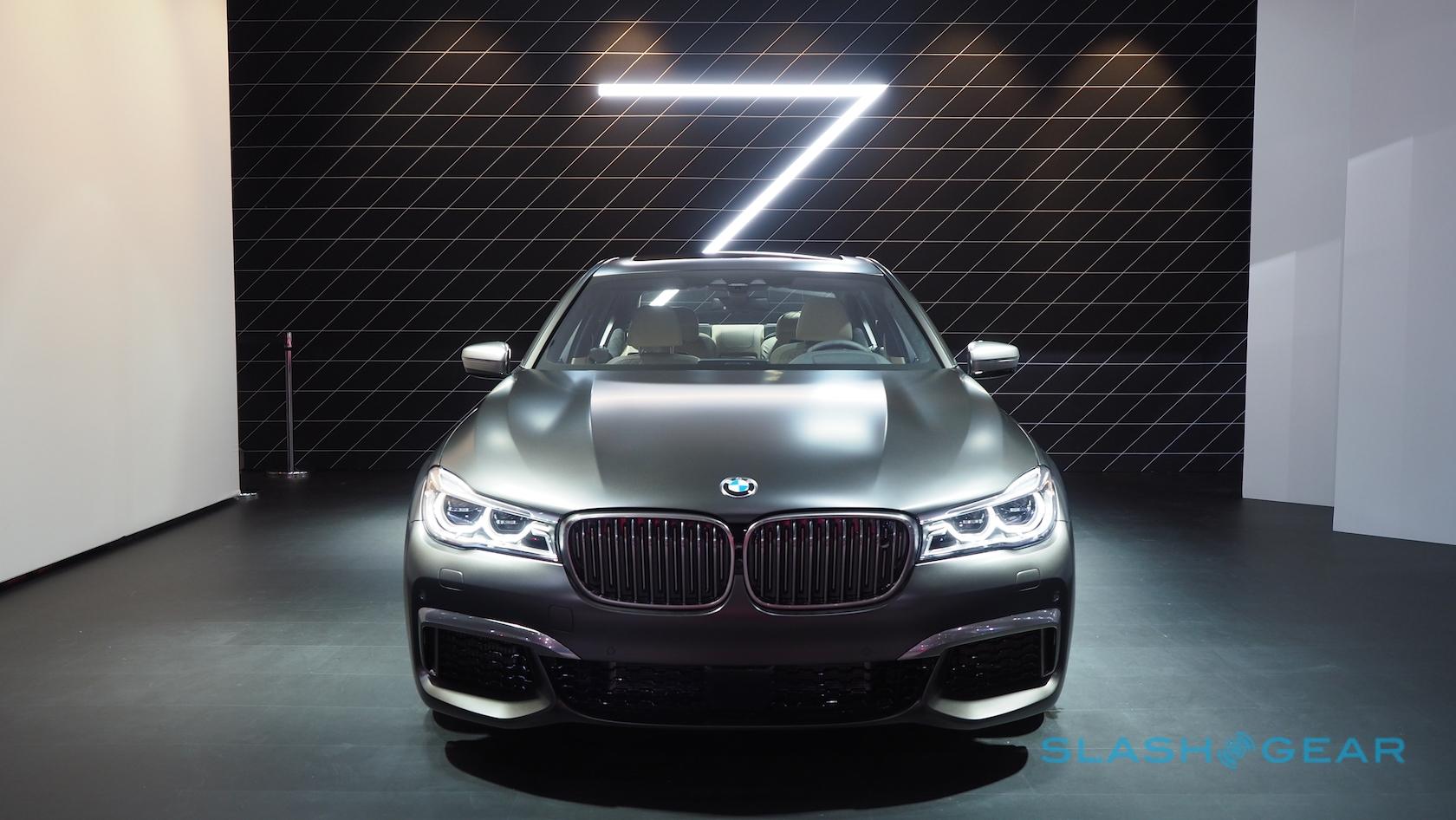 There are some performance differences however. The B7 can hit 60 mph in a scant 3.6 seconds—three tenths quicker than its sib—and boasts a top speed of 193 mph, 38 mph more than the electronically-limited M760i. The B7 is also little sportier, aesthetically, while the M760i xDrive is a little more classically-styled. Fittingly for BMW, its prize 7 Series luxury sedan also took home the WCOTY trophy in the Luxury Car category, beating out finalists in the Audi Q7 and Volvo XC90.

Chris Davies: “Honestly, you wait for one big, beefy German luxury sports sedan to arrive, and two show up – almost at the same time. BMW sensibly allowed its M Sport team free reign to create the M760i xDrive, a 600 HP monster that promises to cosset as it terrifies. Meanwhile, Alpina has been working on its own interpretation, eschewing the M760i’s vast V12 engine in favor of something smaller but wickedly turbocharged. Both have the same power, both look suitably intimidating; choosing between is going to be a problem I’d love to have.”

Hyundai debuted not one, but three Ioniq variants — originally shown in Geneva — that allow eco-minded buyers to choose their eco-flavor. 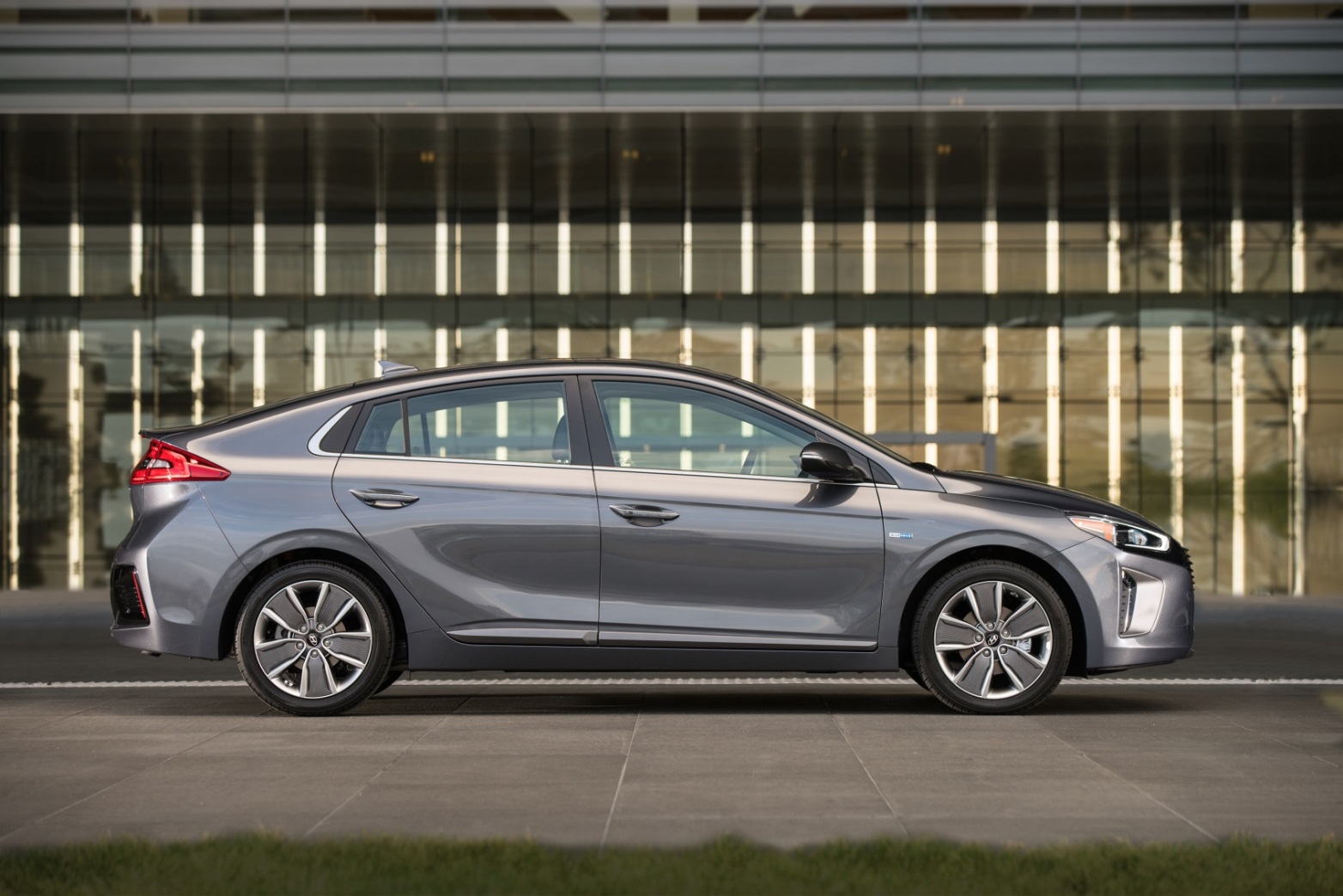 An all-electric Ioniq will go about 110 miles on a full charge. The Ioniq plug-in hybrid will go 25 miles on pure electric range.

Kia updated its Cadenza sedan, giving it a new transmission—the 3.3-liter V6 will now be mated to an eight-speed automatic—Kia’s semi-autonomous driving tech, and unique seats that can adjust to the contour of the driver’s legs. 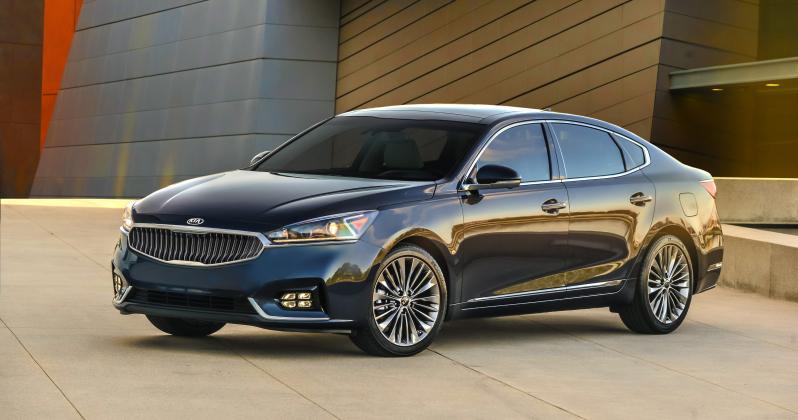 You can also read about the other cars from NYIAS at SlashGear.com/cars.