When you’re making the droptop version of your track-destroying supercar, do you tone things down for the open air crowd? To the relief of R8 fans everywhere, Audi opted to do no such thing with the 2017 Audi R8 Spyder, appearing for the first time at the New York International Auto Show ahead of its release later this year. I caught up with Filip Brabec, director of product management at Audi, as well as the chief engineers on the project to find out why this roofless R8 hasn’t lost its edge in the process.

Audi’s goal may still be to make a supercar that can also hold up as a daily driver, but the R8 Spyder packs the same 5.2-liter V10 engine and seven-speed S-tronic dual-clutch transmission as its coupe sibling

The two look more alike than the last-gen R8 and its convertible version, predominantly because of the switch to the split “blade” design on the sides. In the first-generation R8 Coupe, that swathe behind the doors was a single piece from roof to sill; it couldn’t be kept when the Spyder cut the roof off.

In contrast, Brabec points out, the second-gen R8 separates the blade into two sections, so the new Spyder can retain the lower part. Up top, there’s a cloth roof with twin fins that stretch back over the engine compartment; you lose the glass viewing window through which you can see the V10 in the Coupe, but Audi picks out the five cylinder banks on each side with concentric openings in the carbon fiber. 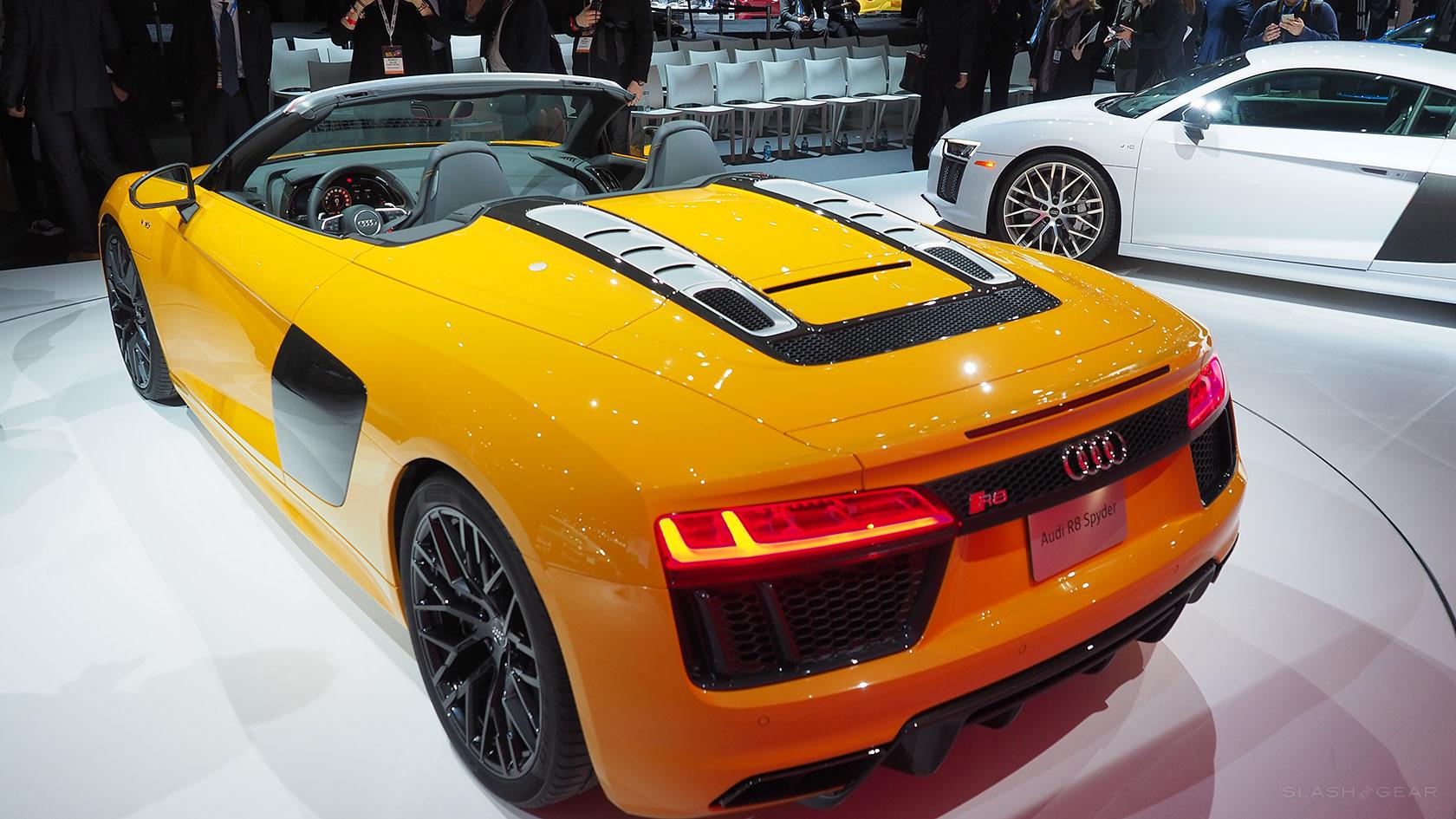 The roof itself is now a single assembly, rather than two pieces in the first Spyder, making it quieter and quicker; it’ll drop in 20 seconds at speeds up to 31 mph. And, while convertibles can suffer more flex when you chop the roof off of a coupe, Audi’s work to stiffen the body means torsional rigidity is up 50-percent over the outgoing car.

That’s down to more carbon fiber in the body and more aluminum reinforcement in the door sills and the tunnel, the Audi engineers tell me, emphasizing just how much of the road-going R8 is shared with the company’s upcoming R8 GT3 car. 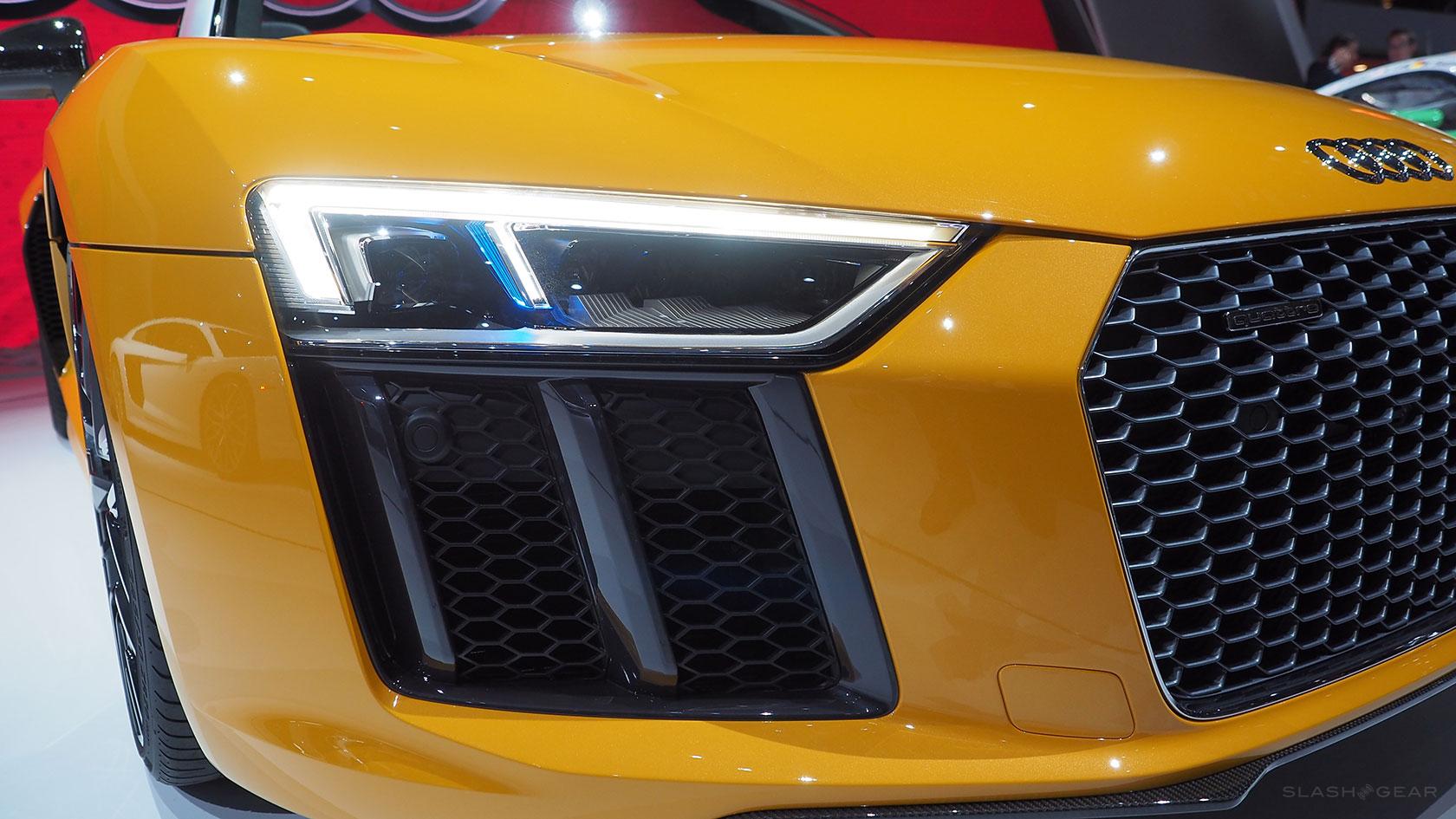 In fact, about half of the parts in the GT3 car are the same as in the regular R8. “You’re driving a car that’s worthy of being a race car,” Brabec says.

What the racers won’t get is the R8’s slick interior. Audi’s Virtual Cockpit is the primary point of interaction, the company doing away with a center display, though the HVAC controls in the minimalistic center stack do have status displays integrated. 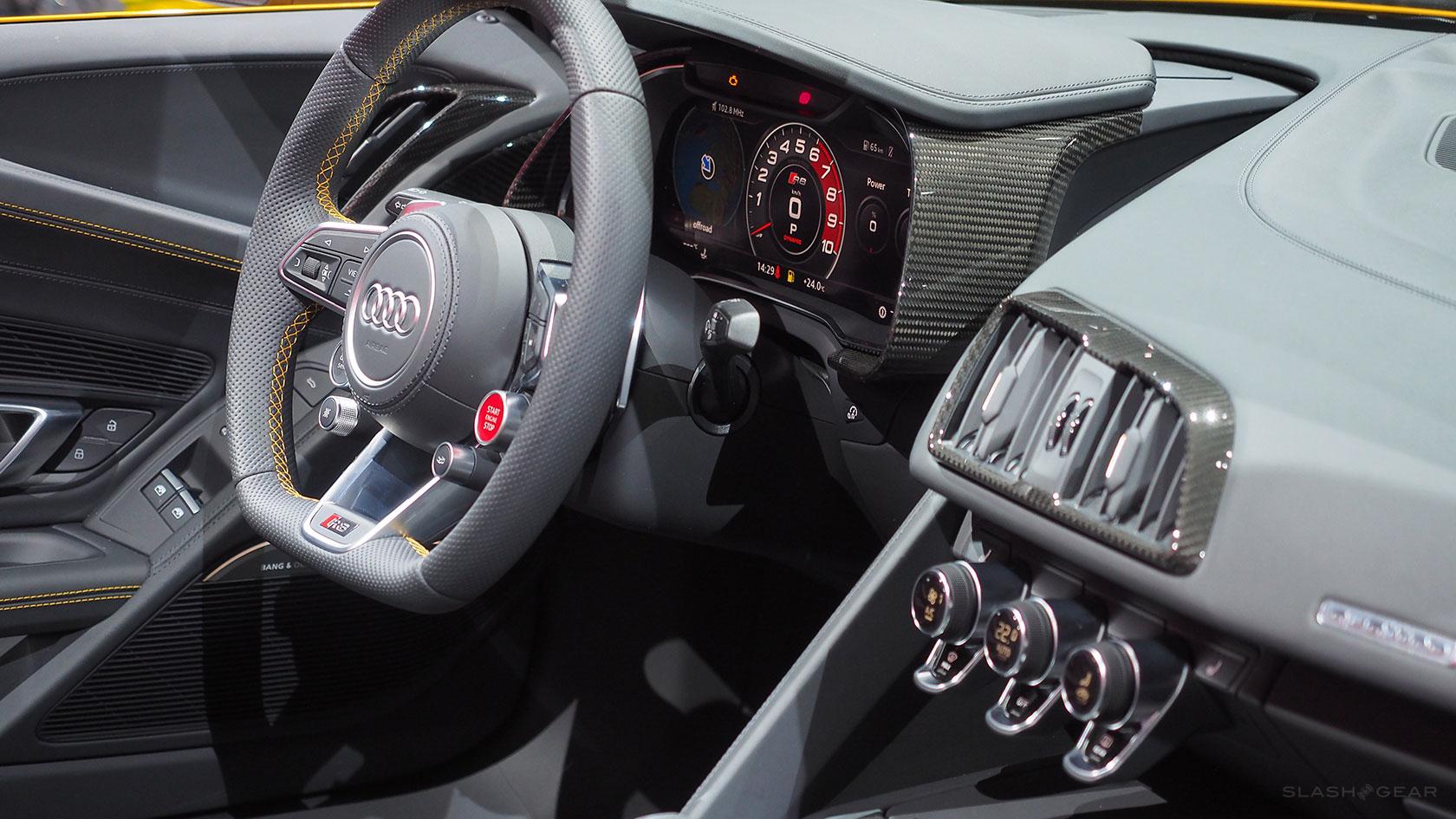 An optional Bang & Olufsen audio system will fill the cabin with thirteen speakers, several of which are in the seats. By integrating speakers in the headrests, Audi says both music and hands-free calls are still audible even at speed with the roof down; both your caller and the R8’s voice command system should be able to hear you, too, thanks to three microphones embedded in the seat belt. 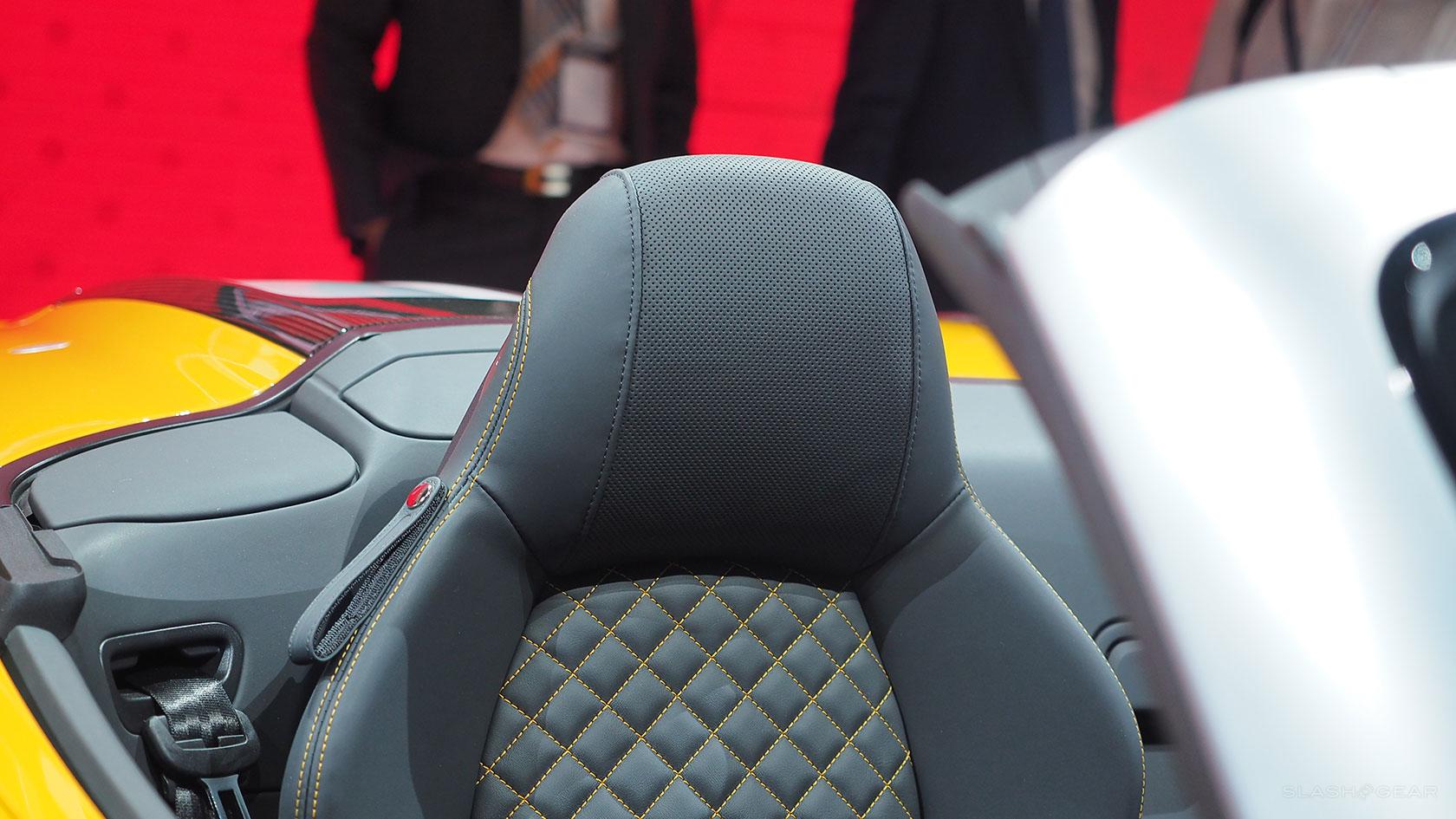 The B&O system even knows if the roof is up or down, adjusting the EQ settings accordingly. An embedded cellular connection is included, too, part of what Audi sees as an inevitable rise of car-to-cloud and car-to-city communication.

“There will be more connecting with infrastructure,” Brabec predicts, “and the cloud in general.” 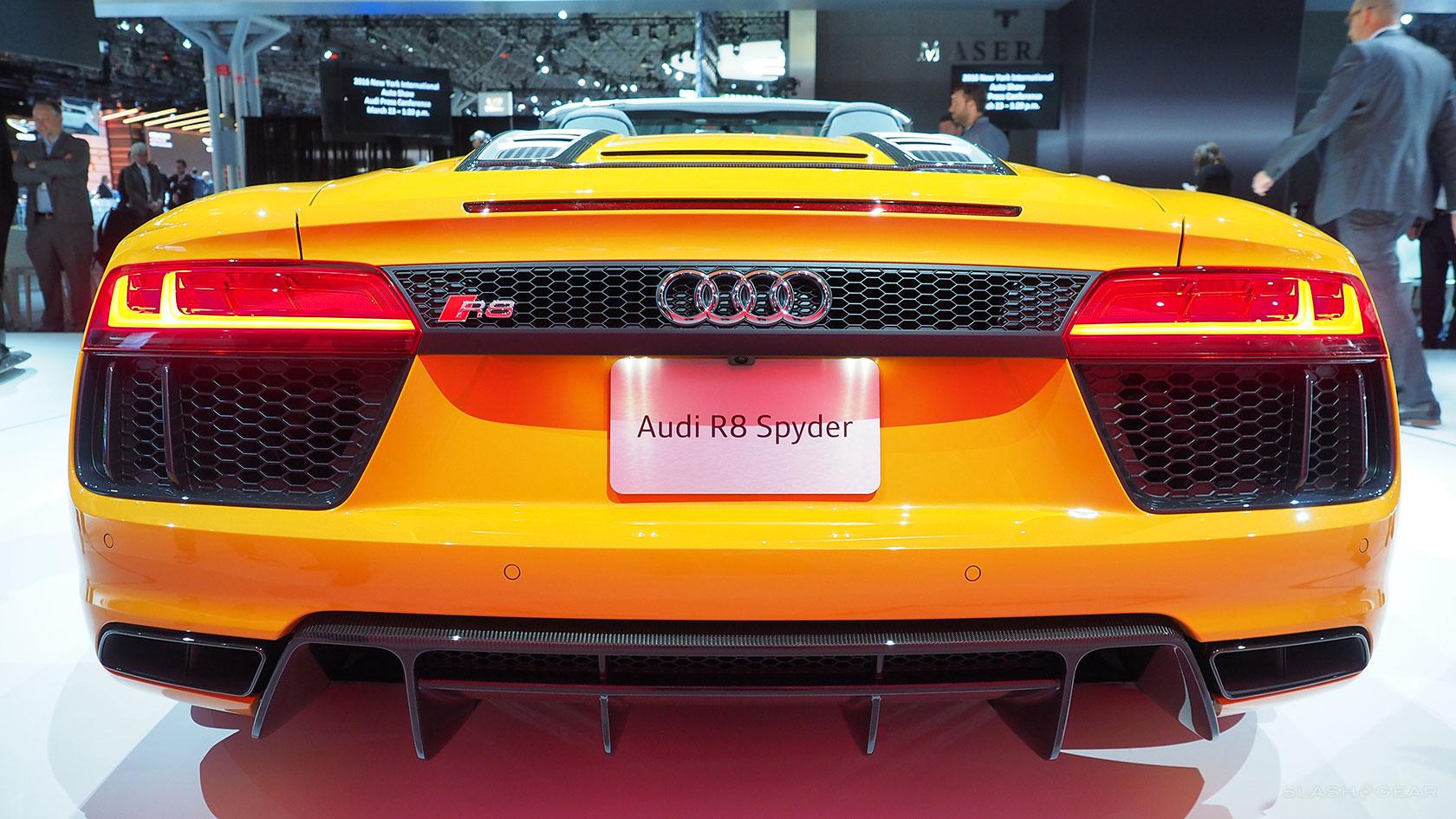 What we might have to wait a while to see is electrification in the R8. Though Audi has been pushing hybrid cars of late, and will have an all-electric SUV in the line-up within the next few years, “we don’t see the supercar segment as being the first” to benefit from such systems, Brabec tells me.

Convertible sales of the old model were around 35- to 40-percent, something Audi expects to continue with this new version. Pricing for the 2017 R8 Spyder is yet to be confirmed, though we’re expecting a premium over the R8 Coupe. 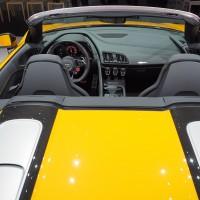 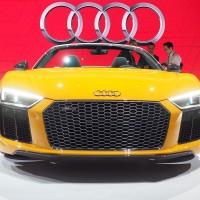 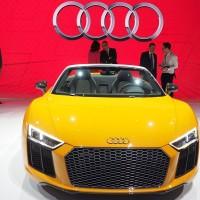 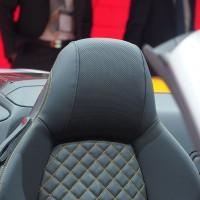 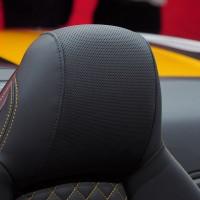 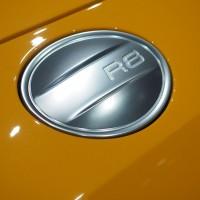 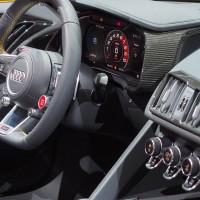 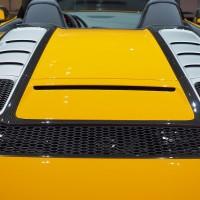 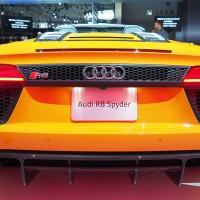 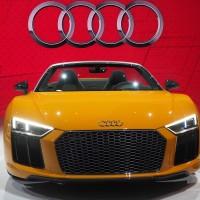 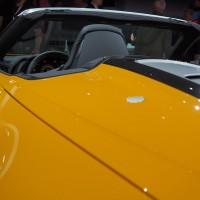 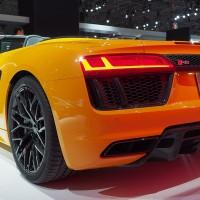 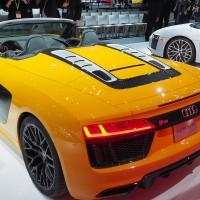 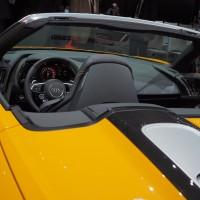 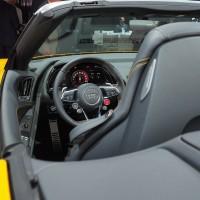 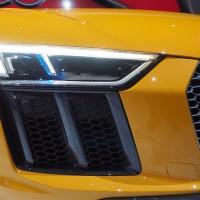