The Samsung Galaxy S20, S20+, and S20 Ultra were revealed at last! After months of rumors and leaks, we’ve finally seen the lot, all three devices made to lead the charge for Samsung into the smartphone-toting future. See our hands-on with the devices in the video below, and our full Samsung Galaxy S20 5G hands-on before release to see them all up close and personal.

If you’d like to get a greater handle on the cameras in the most extravagant of these devices, take a look at our feature: Galaxy S20 Ultra 5G camera: How Space Zoom, 8K and 108MP all work. Below you’ll also see a set of Samsung-made infographics for each of the three different devices. These graphics were released on February 11, 2020, after the event, but before product launch in stores. 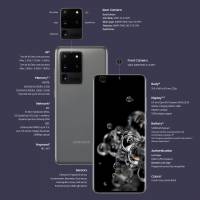 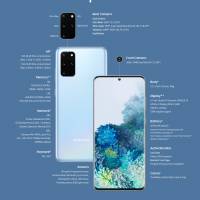 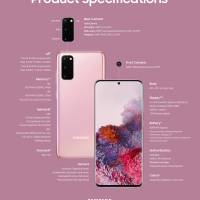 You’ll start to understand the madness that is the many different versions of 5G available in the Galaxy S20 family in our Samsung Galaxy S20 5G release dates, deals, and pricing run-down.

The S20, S20+, and S20 Ultra were all revealed to roll with 5G connectivity, but not all 5G is created equal. You’d better take a dive into S20 5G confusion and explore the differences between each individual model. Take a peek at the second version of the S20, too – that’s coming to Verizon in Q2, 2020.

Take a peek at our Samsung Galaxy Buds+ first look to see color iterations, features, and the differences between the first version of the earbuds and this new release. These earbuds basically have bigger batteries and the ability to connect to more devices than just one.

The Samsung Galaxy Z Flip was revealed just before the Galaxy S20, making sure Samsung presented the device without the suggestion that it was in any way more premium than the Galaxy S20 lineup. This device has the ability to fold – it has a foldable display – and another tiny touchscreen on its back. See our full Samsung Galaxy Z Flip hands-on before release for a closer look.

The Samsung Galaxy Z Flip will be released in stores on Valentine’s Day, 2020. That’s February 14 – this Friday, just days after the original announcement of the phone. This is also the release date for the earbuds – making both devices perfect gifts for consumers’ significant others – or for some reason that’s far less on-the-nose. Either way – here they come! Stay tuned for our reviews of all the products shown above!