This week a report has been struck by the folks at Counterpoint Research that suggests that it’s Samsung and Apple ahead in the sales of smartphones worldwide by a mile throughout the month of October. Their research shows models sold throughout the world, so to speak, surveying 33 countries throughout it, including China where they suggest a boom has occurred this late 2013. Oddly enough it would appear that both the Nokia 105 and the Nokia Asha 501 are up in the ranks as well, taking on the 8th and 10th spot in sales respectively.

This chart has Centerpoint suggesting that Apple dominates both the first and second spot in the sales chart in their 33 countries surveyed, with both the iPhone 5s and the iPhone 5 keeping charge. It’s odd that the iPhone 5 would be sold in such bulk, you may be thinking, since it’s no longer up for sale at Apple. But lo, and behold! The iPhone 5 is still certainly up for sale at 3rd party sales locations throughout the planet, at a discount in most retail spots almost without a doubt given its replacement by the colorful iPhone 5c. 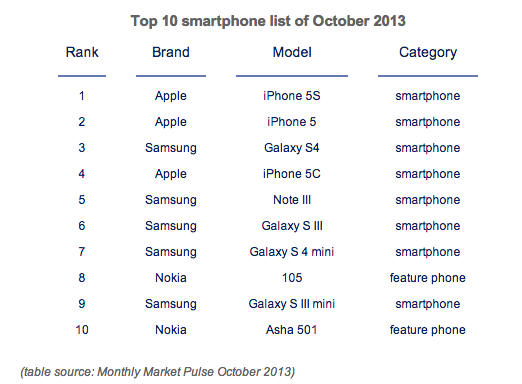 The iPhone 5c, meanwhile, takes up the 4th spot in the sales charts here for October, being beaten by Samsung’s highest entry with the Samsung Galaxy S4. You’ll find the Samsung Galaxy Note III, Galaxy S III, and Galaxy S4 Mini taking the next several spots, with the Galaxy S III Mini rolling in at a clean 9th. These entries are clearly being marketed continuously throughout the planet despite their replacing of one another in the market here in the United States.

Data from Centerpoint’s results here come from surveys of both distributors and several major retailers across 33 countries. If we were to make any majorly definitive calls on the meaning of these spots, we’d need a bit more information on how many devices were actually sold. That said, it’s certainly telling enough as it is to see nearly the entire chart swallowed by two brands. 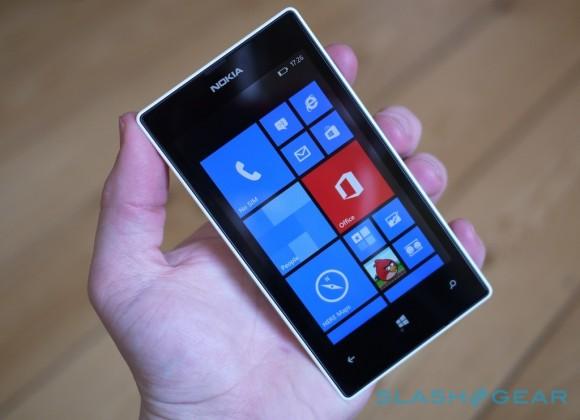 Then there’s Nokia’s low-cost phones, including a spot taken by the Nokia Lumia 520. This Nokia Lumia 520 Windows Phone 8 device has appeared several times over the past year as the best selling Windows Phone device worldwide, and it appears to continue riding this train as Centerpoint suggests that the device “drove the Windows Phone momentum across prepaid markets of Europe, US, and Asia during October.”