iPhone 5 discontinued: where did they all go?

Earlier this week Apple held an event in which they changed their model for releasing iPhones, replacing the until-recently standard hero device iPhone 5 instead of just bumping it down a notch in the pricing structure. In comes the iPhone 5s as the hero, and the iPhone 5c to take the second tier. But here’s the kicker: even though Apple has discontinued the iPhone 5, there’s certainly still a massive amount of unsold stock out there in the wild. So where did they all go?

Before you even head over to Apple’s online store and check: at the time this article is published, there’s literally no section for iPhones to be had in “refurbished” stock. You can find just about any other sort of Apple hardware in the Apple online store in like-new condition with a price reflecting its refurbished state, but at the moment: there’s no iPhone of any kind.

Apple is not selling the iPhone 5 online any time in the foreseeable future. If you head to Apple Store online support, you’ll find a standard answer as follows:

“The iPhone 5 is no longer available for sale by Apple.  If you would like a previous generation model, the iPhone 4s 8GB model is available.” – Apple Store Support (Apple Specialist)

We’ve received word from those that’ve made the attempt to ask about iPhone 5 stock online that, when pressed for information, Apple Store online support sends the following message out:

“Okay I understand your concern, but I don’t have any information about the rest of the iPhone 5. You can still check your local carriers of course.” – Apple Store Support (Apple Specialist)

We called in to our own local Apple Store (one of several in Minnesota, in this case) to ask if the iPhone 5 was still available. The responded that yes, they did indeed still have the iPhone 5, but stock was very limited. No unlocked models were available, and 16GB models for all carriers were running low on stock.

Meanwhile carriers are selling the iPhone 5 at similar discounted prices. You’ll be keen to note that this is the only place you’ll be able to purchase an iPhone with these specifications with 64GB of internal storage for the foreseeable future – the iPhone 5c will be available for $99 and $199 starting on the 20th in-store, but these will be 16GB and 32GB editions. 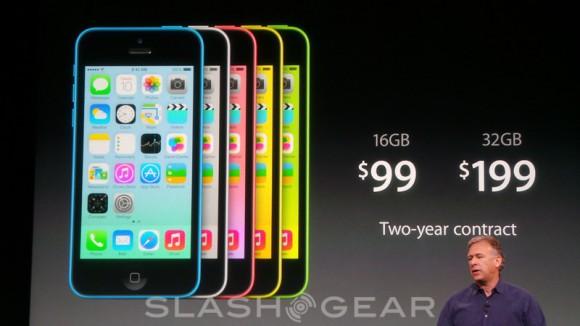 Meanwhile the iPhone 4S will be sold for $0 (“free”) with a 2-year contract on several carriers and $450 off-contract, and that’s with just 8GB of internal storage. Off-contract prices for the iPhone 5c are $549 for the 16GB and $649 for the 32GB. Which sounds like a winner to you?