They’re the new smartphones we’ve been waiting all year for, and Apple’s iPhone 5s and iPhone 5c didn’t disappoint. Replacing the discontinued iPhone 5 and taking the mid-range and flagship spots in Apple’s line-up, each runs iOS 7, itself a considerable departure from versions of the smartphone software before it. With sales set to begin imminently, head on past the cut as we pick out exactly what you need to know about the new iPhones.

The iPhone 5s co-headlines this week with a release of the iPhone 5c, both of these devices running an operating system available to the public as of yesterday in iOS 7. These iPhones will be released on a large scale, here hitting China the same day as the rest of the first wave for the first time in history (for the iPhone, that is). The iPhone 5s brings up the headliner smartphone iPhone 5 with a collection of feature boosts and a solidification of form while the iPhone 5c takes the iPhone 5 in a colorful direction, stripping away the metal of last year’s generation and replacing it with a set of hard plastic backs.

SlashGear’s iPhone 5c review suggests that this smartphone may be the “most misunderstood iPhone so far”. Due largely to suggestions from so-called “leaksters” that Apple was preparing a “budget” model for the iPhone line, the public expected such a model to be introduced here at the tail end of Summer 2013. Apple instead delivered a multi-colored iPhone that’s essentially the mid-tier evolution of the iPhone 5.

Instead of pushing the iPhone 5 to the middle of three iPhones available for sale, Apple decided to replace the iPhone 5 entirely. So where have all the iPhone 5 devices gone, you might ask? We’ve got a handle on that too – they’re still out there!

The iPhone 5c works with hardware that – aside from the plastic back – functions the same as an iPhone 5. Available in yellow, green, pink, blue, and white, the iPhone 5c works with the same 4-inch display, 8-megapixel camera on its back, and processor under the hood as its predecessor, the iPhone 5. This device is being delivered for a starting (on-contract) price of $99.99 USD, and you’ll find that picking it up may be a bit easier than finding an iPhone 5s on launch day.

“While the iPhone 5c may be, for the most part, last year’s flagship in this year’s fashion, there’s no denying that there’s an appetite for that. The iPhone 5 remained an excellent option up until its (perhaps premature) retirement, and the iPhone 5c takes the best of that and makes it more eye-catching and more affordable.”

Reports of a slightly lower-than-normal output per-store for the iPhone 5s have popped up from anonymous sources over the past week, while the iPhone 5c seems to be keeping up with demand in pre-orders online. The iPhone 5c will be offered with T-Mobile, Verizon, AT&T, and Sprint carrier support from the get-go, while it’s suggested that Apple stores will be the only place where both the iPhone 5c and the iPhone 5s will be fully stocked on day one – that’s Friday, the 20th of September, 2013.

You’re getting the iPhone 5c delivered with iOS 7, of course, meaning you’ve got the newest in new software as well. Quite a few devices – most of the Apple mobile smart devices from the past few years, in fact – can upgrade to iOS 7 for free this week too.

With iOS 7 Apple aims to create a new vision for the smartphone and tablet universe, one that’s just as newly emblazoned with color as the iPhone 5-turned-5c. In addition to issuing this update to the masses, Apple created a new way for users to access apps if they do not want to – or can’t – upgrade to the newest iOS. 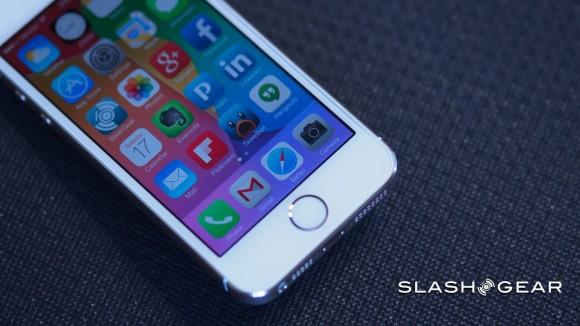 In other words, older devices get older versions of apps. Meanwhile the iPhone 5s moves on with 64-bit processing and iOS adapts within iOS 7.

If you’re looking for some in-depth judgement on how iOS 7 works in everyday life, you’ll want to head to SlashGear’s iOS 7 review. The SlashGear iOS 7 tag portal is up and running now as well, with as much coverage of the operating system as can please even the heartiest of next-generation software enthusiasts.

With SlashGear’s full iPhone 5s review you’ll find a device that, while we’ve come to expect an incremental update to the iPhone with each “S” update, “could be enough to buck that trend”. You’ll find that this machine’s upgraded camera setup, fingerprint sensing home button (Touch ID, that is), and processor setup – A7 chip with M7 motion coprocessor – make for a rather interesting change-over from the iPhone 5. The iPhone 5s works with iOS 7 as well, right out of the box.

The Touch ID fingerprint scanning home button on the iPhone 5s is also set to be a real selling point for consumers hoping for device-centric security. This sensor sits below the physical home button of the iPhone 5s and allows for scanning from any angle – and you can use your toe, too, if you feel so inclined.

“The iPhone 5s is the best iPhone so far, by a long shot. Apple is notorious for describing its products as “magical”. The magic of the iPhone 5s is in how usable its improvements are. The updated camera is both fast and capable, with the True Tone flash proving itself to be no gimmick, while the Touch ID system feels like the first biometrics system that actually stands a chance of succeeding in the mass market.”

For a straight-on comparison of the three current market-ready iPhone devices (including the iPhone 4S, which continues to be offered by Apple today), you’ll want to have a peek at SlashGear’s Battle for iOS 7 Supremacy. There you’ll find that it’s more about color or camera power that may stay your hand, and your pocketbook. 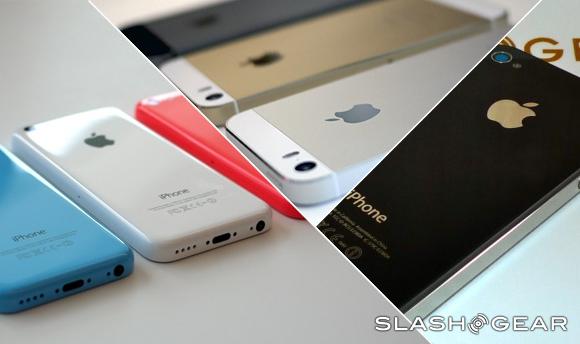 The iPhone 5s and iPhone 5c will quite likely be joined by new members of the iPad family in the not-too-distant future. The 5th generation iPad and the 2nd generation iPad mini are set to be delivered with what’s been rumored to be a very similar look for the smaller slate and a bit of hardware for the larger device that’s a lot more “mini” looking than ever before. We shall see, soon enough!