The Samsung Galaxy line of smartphone-sized devices has been an apparent success for the brand, bringing on a second round last year (two years ago the original Galaxy Note was introduced), along with two sizes of Galaxy Note tablets. As the Samsung Galaxy Note 8.0 appeared with styling not unlike that of the GALAXY S 4, Samsung all but guaranteed the release of another new Galaxy Note “phablet”. 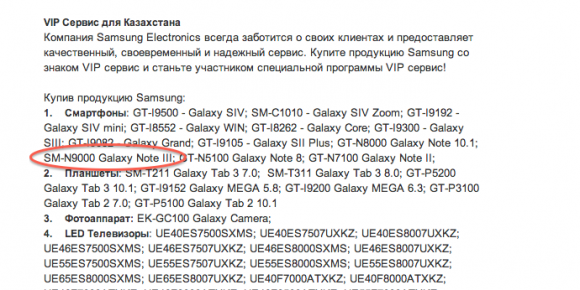 According to this leak, all we can really tell is that the device exists – or will exist soon. If history tells us anything, it suggests that this machine will be revealed at one of two places. The first and more sensible place would be at the June 20th event Samsung has planned for new Galaxy and ATIV devices. The second place the Galaxy Note III could be revealed is at IFA 2013 – the original Galaxy Note was born there, as was the second, so there’s always a chance that Samsung might stick to tradition.

Samsung has been turning toward a model in which they announce their hero devices at their own, separate events over the past year or so, so sticking with IFA and going it alone (in this already announced event) for the Galaxy Note III are just as likely possibilities as one another.

he Samsung Galaxy Note III has been strongly suggested by SamMobile to work with a 2.3GHz Qualcomm Snapdragon 800 processor, 5.99-inch display with 1080p resolution, and a 13-megapixel camera. Inside we’ll either find Android 4.2.2 or Android 4.3, depending on when the device is released – with Samsung’s TouchWiz over the top, of course. Then it goes without saying that the Note III will work with the newest in Samsung’s S-Pen technology.