Supposing you were more than excited about the announcement by Apple this past week that their next-generation Apple A7 chip and iOS 7 brought on 64-bit support for processing, it may come as a shock that Android already has such capabilities. In fact, because Android is based on Linux, it’s had the ability to work with 64-bit processing for a long, long time. Word straight Linux Foundation Executive Director Jim Zemlin suggests that there isn’t even any “special development process” that has to be done for Android to handle 64-bit processing power – it just works.

While we’re not going to get too deep into what it means to have an Android smartphone with 64-bit support, it should be made clear today that while the iPhone 5s will indeed be the first (and only, as Apple said) smartphone on the market with 64-bit support, it wont be for long. Apple’s iOS 7 supports 64-bit processing while Android has supported this technology at its base, and has for some time.

“[While Apple touted 64-bit support in the new iPhone,] that’s done in Linux, has been done for a long time. The Android ecosystem just picks that up by default, they don’t have to go through any special development process to do that.” – Linux Foundation Executive Director Jim Zemlin

The above quote comes from a report with Ars Technica where the newest Who Writes Linux report is also referenced. In that report its shown that Samsung and Google are now amongst the top 10 contributors to Linux, having made a total of 5% of the changes between the two of them. 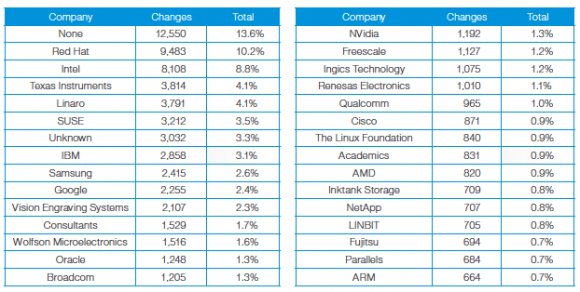 Right up near the top: Intel. According to a report from DailyTech collected at IDF 2013 last week, Intel also showed massive support (extra enthusiastically) during the same keynote speech where Google released information about their next generation of Chrome OS machines: Chromebooks and a Chromebox too.

It was perhaps because of that blast of information coming immediately after the flash on the screen you’re about to see that the point was all but lost. Who would think anything of this minor mention of “64-bit” just two days after Apple’s own 64-bit-laden iPhone 5s presentation? Why would this be newsworthy?

At the moment, this photograph is just one in a collection of bits and pieces of support for the idea that Android will be pushing toward 64-bit processing in the near future. Android as an operating system – down to the code – already supports this technology, now there just needs to be a bit of hardware to provide the backing. And some software to provide a need for 64-bit support – though that can (and will) come later.