With the Google-made Chromebook Pixel we’ve got several points that the company hopes will be made right from the start – the first being an erasure of the hardware from our experience. They say this in the “Chromebook Pixel: For What’s Next” presentation video provided today at the launch of the product – Andrew Bowers, Group Product Manager on the Chromebook project with Google literally says, “we basically wanted the hardware to disappear.” If that’s the case, does it really make sense to release the Pixel at all?

Google is once again attempting to release a product in the Chromebook Pixel that’s representative of their Nexus state of mind. With the Nexus line of Android products, Google works with a manufacturer to create a smartphone or tablet (or other devices, in some cases) that presents a Google-only iteration of their software. With the Chrome operating system, Google already offers this experience on every single Chromebook that’s been released – so the job is already done.

So why release the Chromebook Pixel?

Google has already been working on Chrome (the web browser) for a touchscreen-friendly universe – they’ve even gone so far as to suggest dominance on Windows 8. It’s in that touch environment that we’ve already seen Chrome working… generally ok.

The internet is not ready for touch. The web was built – and continues to be built – with work in mind. Work and play, but play through a work-friendly interface. Chrome is attempting to change the way the internet is used by creating a home screen with a collection of icons that are large enough to easily be tapped by a human finger. There are touch-friendly web apps out there, but there’s a step between easy and confusing that still exists between the user and a fully touch-friendly Chrome OS. 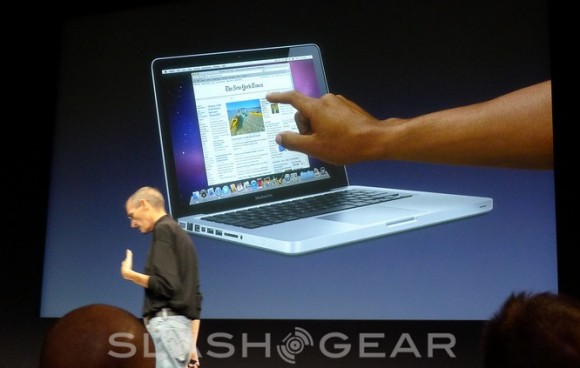 If you’ll look back to October 20th, 2010, also known as the reveal date for Apple’s OS X 10.7 Lion, you’ll find that “Mac Meets the iPad” was without a doubt a theme of the day. The photo you see here of a real-deal touchscreen MacBook was seen once – and never heard from again.

There’s a reason for that.

With the Chromebook Pixel, Google has stepped out ahead of itself. Chrome has not yet proven itself as an operating system that’s ready to take a foothold in the modern work-oriented world, yet a $1,299 container for it seemed reasonable somehow or another. Google must have a special order ready for these machines or they’ve got something to prove to someone about their manufacturing finesse, because this is a machine I’d definitely not mind using with Ubuntu.