When I reviewed BB-8 by Sphero, I didn’t expect the company would go back and create an R2-D2, too. They built their name on the original remotely controlled sphere – Sphero – and they’d not yet expanded to the world of Cars and Spider-Men. Since then they’ve become a much more diversified group of smart-device creators, and it’s become time to roll out with the most beloved Star Wars robot in the history of the world: R2-D2 (also now by Sphero).

When this article was first published, Sphero’s Star Wars lineup included BB-8, a Battle-Worn BB-8, BB-9E, and R2-D2. This review is for the first R2-D2 released by Sphero, as released on September 1st, 2017, AKA Force Friday II. Those coming here looking for the most awesome Star Wars toys in the history of Star Wars, look no further.

NOTE: The “also” part of the title refers to BB-8 by Sphero, the best Star Wars toy ever made. That’s our first Star Wars-related Sphero review – and not the last. 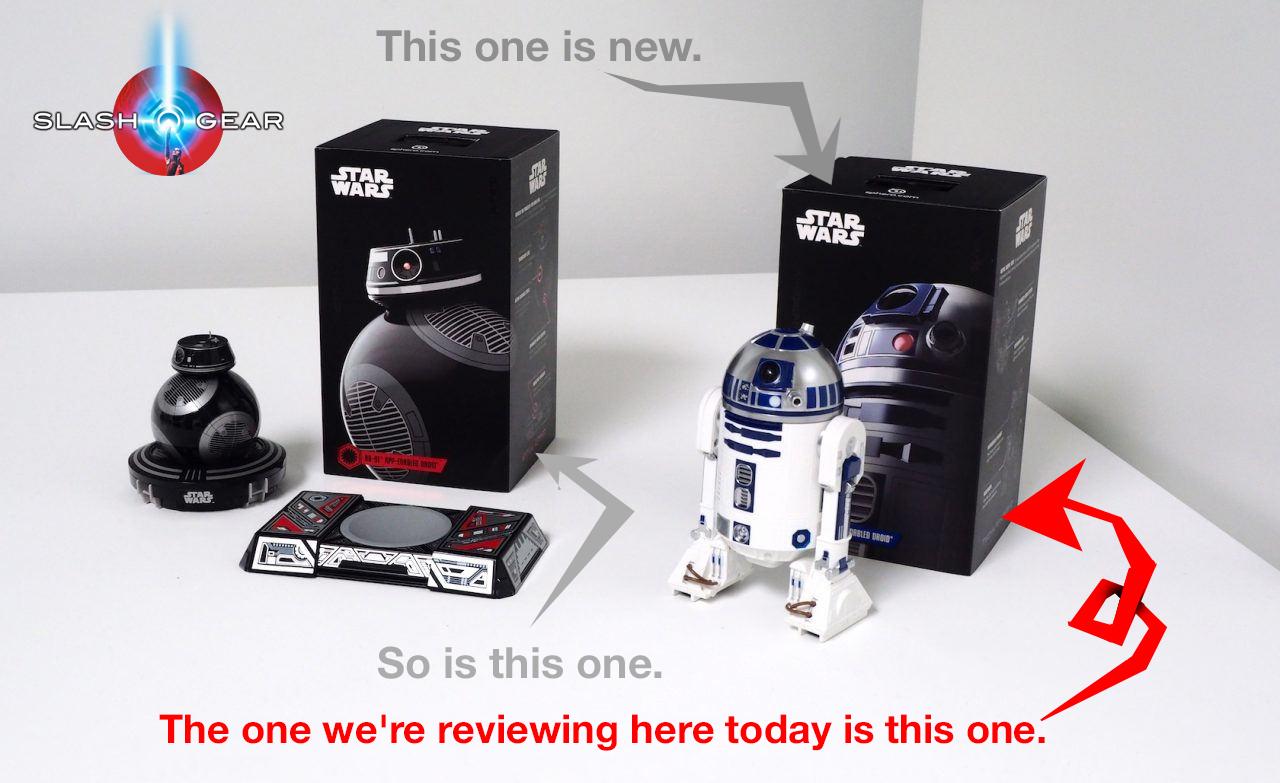 There are several pretenders to the throne (none of which are shown here). So-called “Smart” devices are so cheap to produce. One example is the Hasbro “Smart R2-D2” that costs anywhere between $39 and $99 – do not buy this one. The Hasbro model will connect to its app just fine, but given its status as a quick-sale-drop item this season, it won’t necessarily work for long. Hasbro will have no compelling to support the app beyond the sale time of the unit, and it does not come with any other sort of controller.

The R2-D2 by Sphero comes in a black box with no plastic “window” up front – as shown in the photo above. It says SPHERO in big letters, very clear on more than one side. The R2-D2 by Sphero is priced at $180 (or thereabouts) and wont likely cost much less (or more) than that any time soon. Beware fakers – they’re out there.

This Star Wars Droid is 6.7-inches tall and more detailed than it needs to be. That means he’s got treads on his two main lets, and a central foot that retracts automatically. Whilst standing upright, the third leg retracts, and when traveling about, the third leg extends. 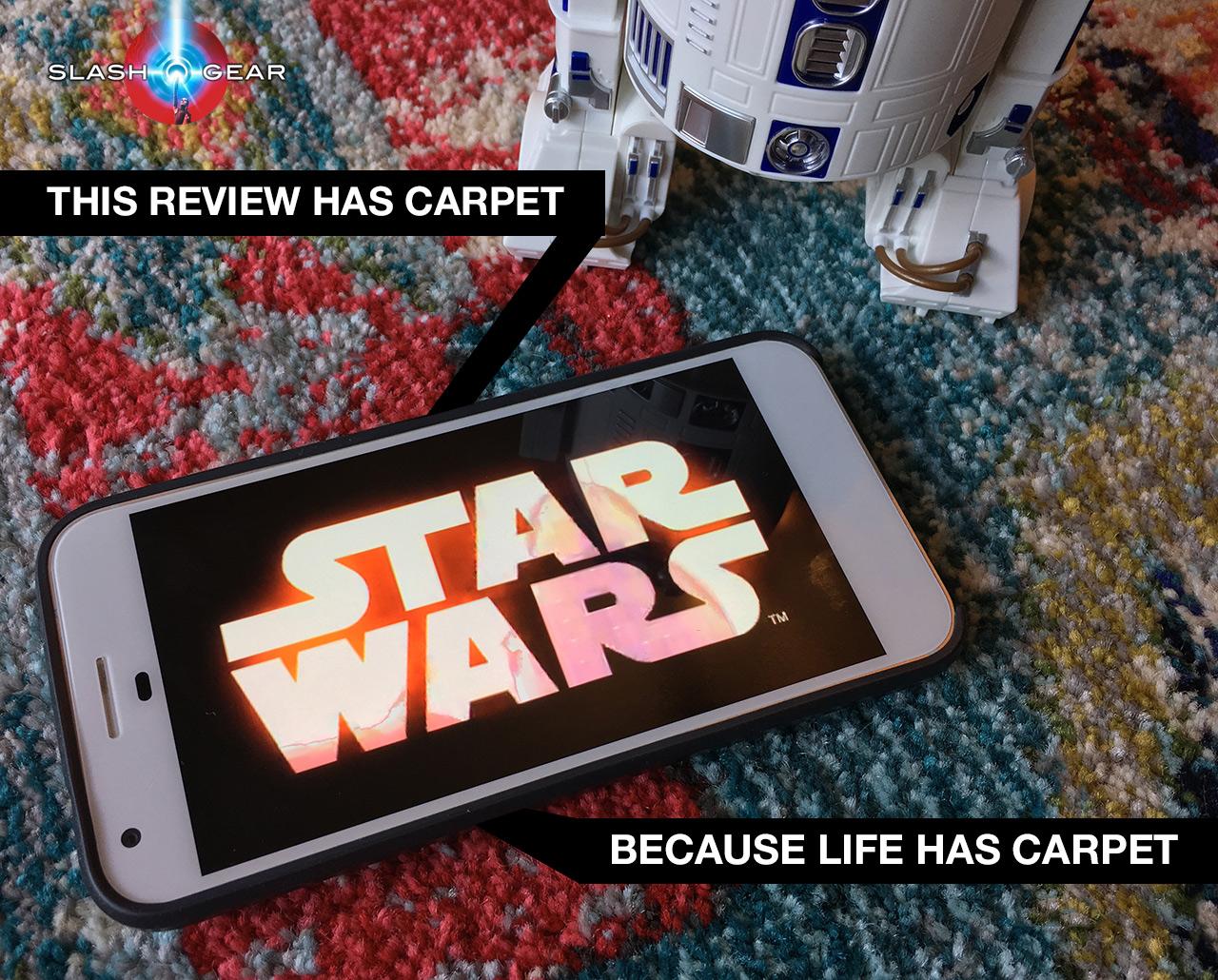 It’s not difficult to imagine Sphero finding the creation of R2-D2 to be a bit of a challenge, mostly because of elements out of their control. Carpet was likely one of their biggest challenges, what with the ever-present threat of getting stuck in place. BB-8’s worst enemy is sand – and for that there’s no head-inclusive solution, while R2-D2’s worst enemy is uneven terrain.

For R2-D2 toys of all sorts, the biggest challenge is in the wheels. How might a droid this size get through rough terrain with only the wheel size allowed by these tiny feet? The solution was in the actual real-deal R2-D2, who doesn’t use wheels at his back feet at all, but a pair of treads. 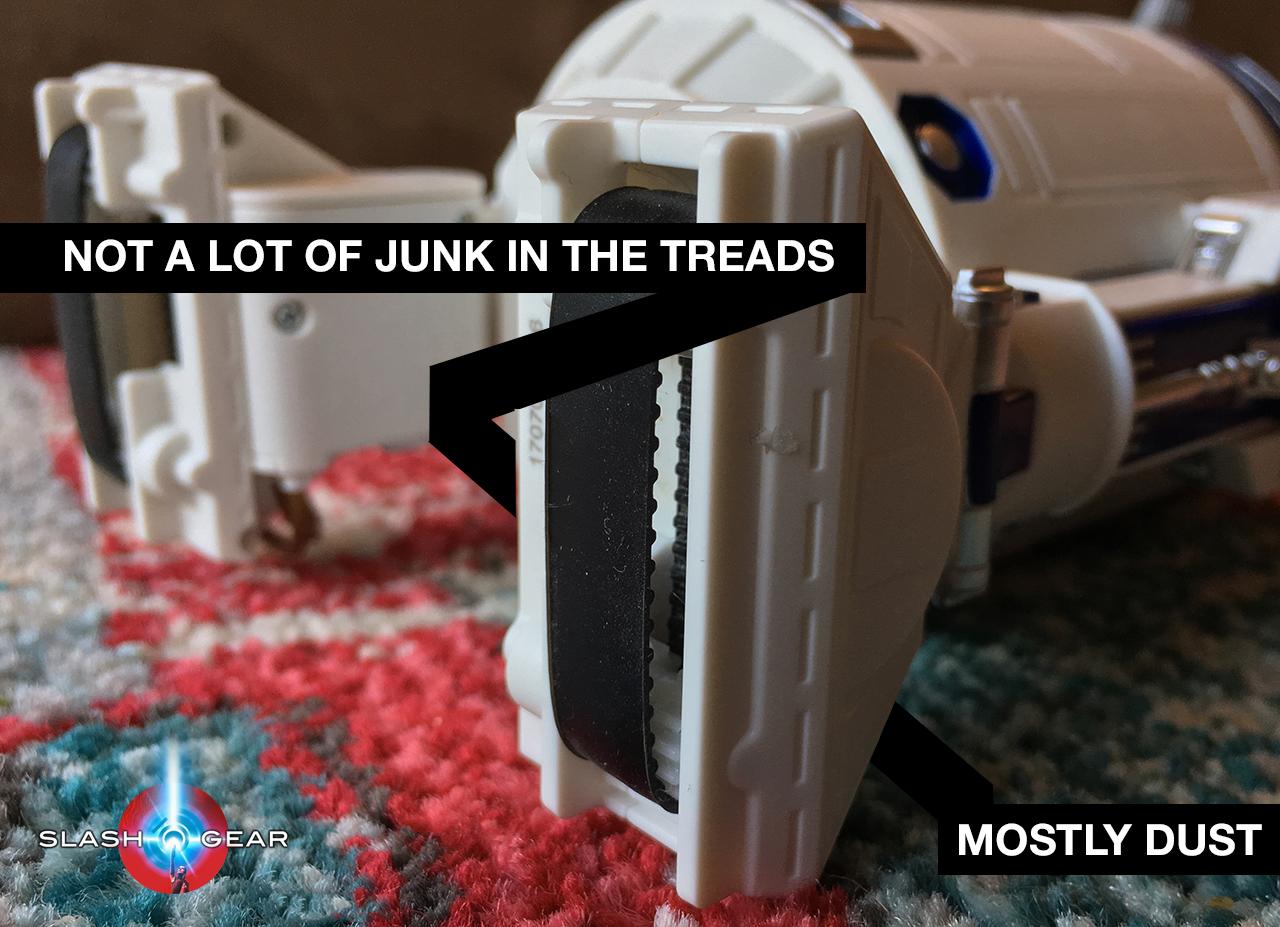 ABOVE: I’ve been rolling this R2 around on carpet for quite a few hours at the time this photo was taken. It seems that some dust sticks, but not nearly enough to impede the movement of the robot. I do wish there were an easier way to clean the treads – this is certainly a place I’ll be returning for our inevitable 6-month-later review part II.

This R2 unit has real treads, just like his original iteration. He gets around surprisingly effectively on standard medium-thick, medium-height carpeting, and extremely well on flat ground. I can’t imagine this unit would move through 1970’s-style shag carpet too well – but what droid would?

* As it is with the real R2-D2, this droid’s design is a bit top-heavy. That means less stability when resting on just two legs, and completely fine stability on all three. This only becomes a problem when attempting to do quick movements on extra-deep carpeting. For R2-D2 flat ground is no problem for all movements, even on two legs. 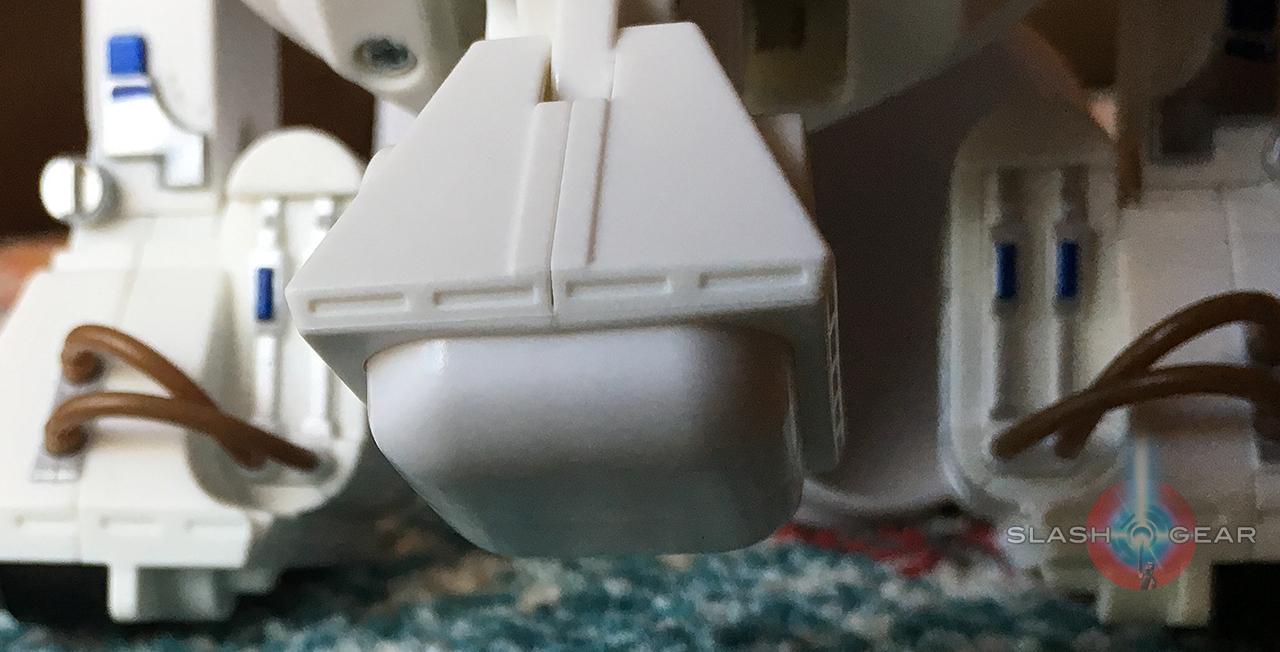 The third leg has a plastic bump with rounded edges that glides with ease across most surfaces. I worry a bit about the third leg getting beat up on harsh ground – especially with rocks – but it’s not as if I’m planning on putting this toy out to roll in a parking lot at any point. R2-D2 is really meant to function mostly indoors.

R2-D2 is alive – not that he has any sort of substantial artificial intelligence that’d make me consider him a person, but he’s no simple remote controlled robot. Much like BB-8, R2’s standby mode has him periodically chirp, beep, and trill. His head turns back and forth, his lights blink, and he makes comments from time to time, much like the real R2. He’s not the sort of droid to sit idly by.

Sadly this version of R2-D2 does not have any prehensile robot arms, nor a real holographic projector. Not without the app, that is. The projected holograms present in the BB-8 by Sphero app have been replaced by augmented reality here in R2-D2. The same is true of BB-9E and BB-8, each of whom have their own unique ship to explore in AR.

The app opens up the Millennium Falcon for R2-D2, allowing the user to roll through the majority of the ship while the real R2-D2 stays mostly stationary. The mapping of the Millennium Falcon in and of itself is incredible – the detail here is a real treat. Inside the ship are a set of factoids about the Star Wars universe activated by virtual proximity. 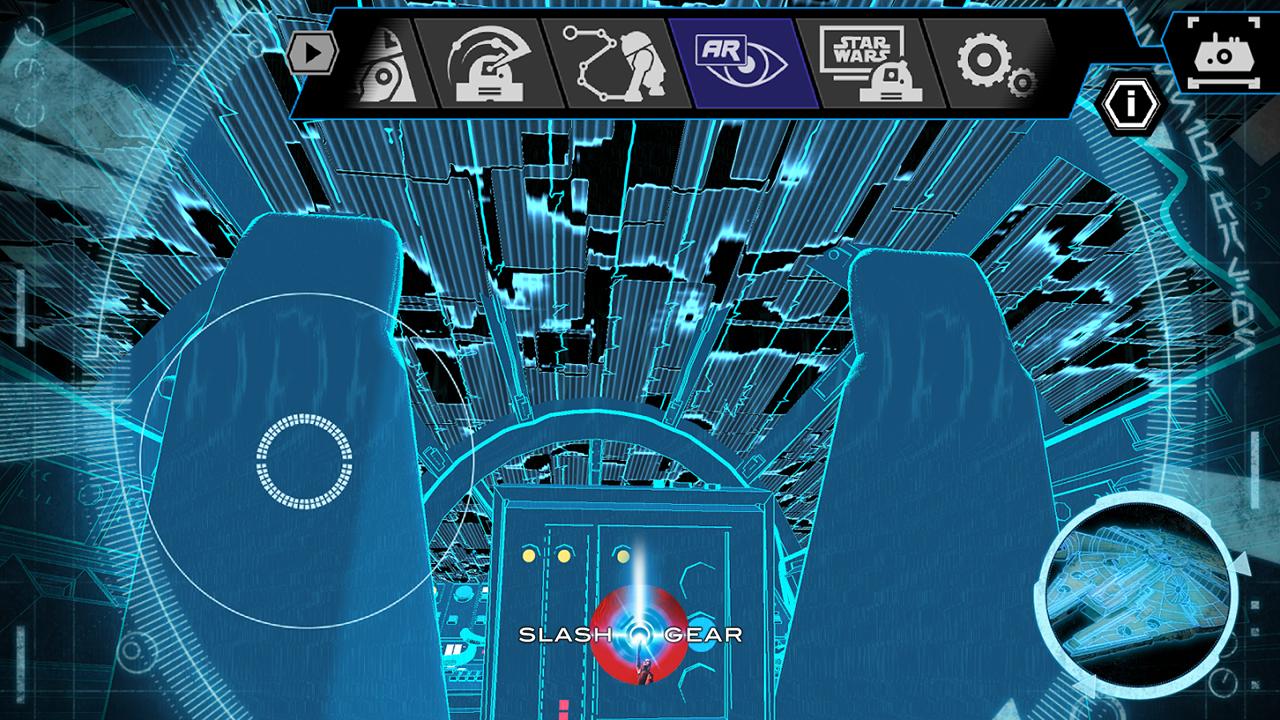 The Millennium Falcon AR experience here allows the user to look around in real-time at the ship in all directions. 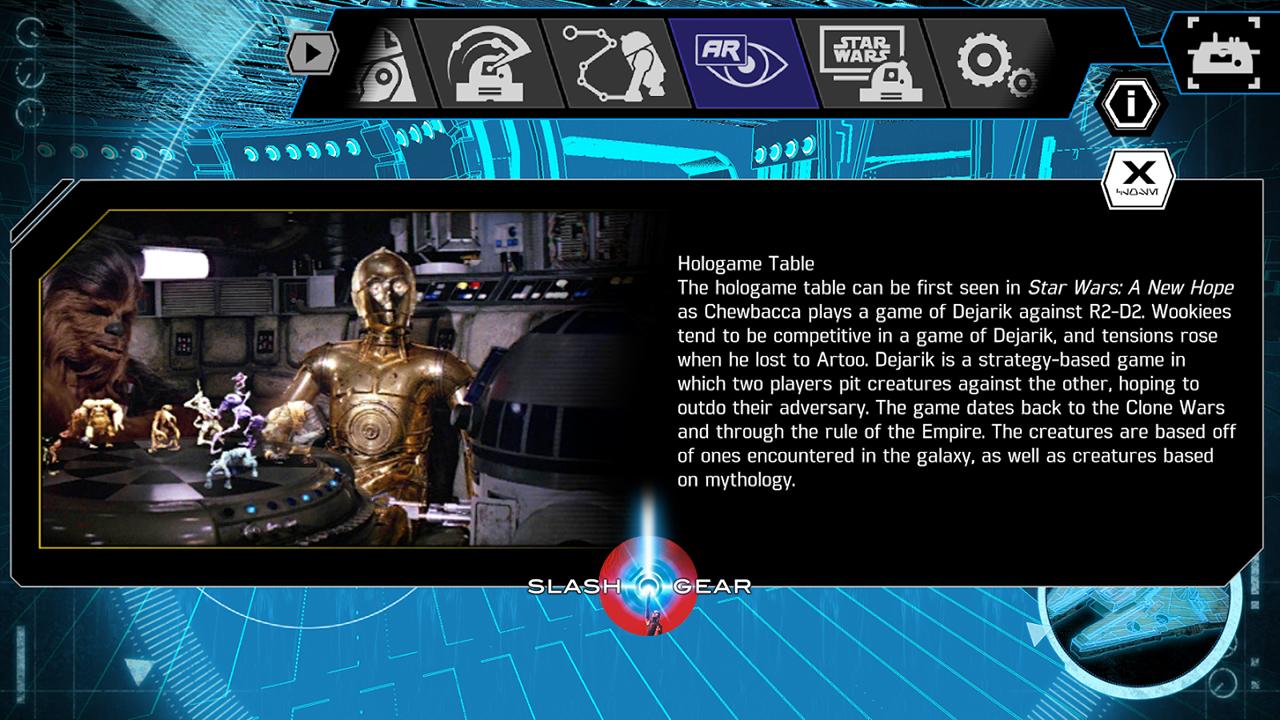 The falcon isn’t super detailed, but the experience is more than just a simple bonus feature. Super-fans of the film Star Wars: The Last Jedi will want to unlock all three ships to go exploring for new details. To unlock all three, all three droids must be purchased and activated.

R2-D2 also got the same ability to patrol your general area that BB-8 does, bumping in to objects and maneuvering around your living room. This is one of a variety of ways to have R2 move about – another is a more classic version of the Sphero joystick. There’s also a “draw a path” feature that R2 will follow. 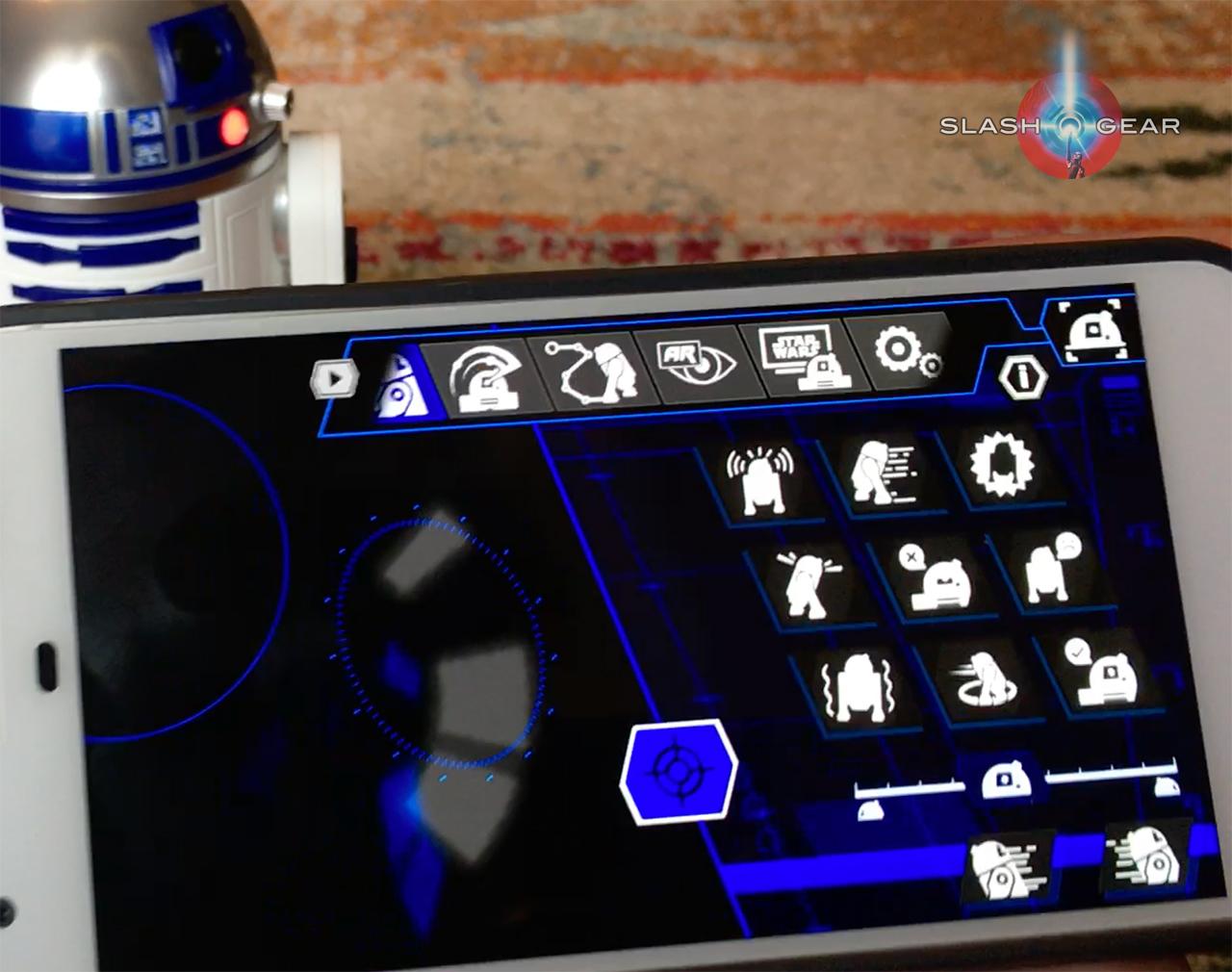 Above: Joystick with head motion control, rotate, and sound/motion buttons. Below: Draw A Path for R2-D2 to follow. 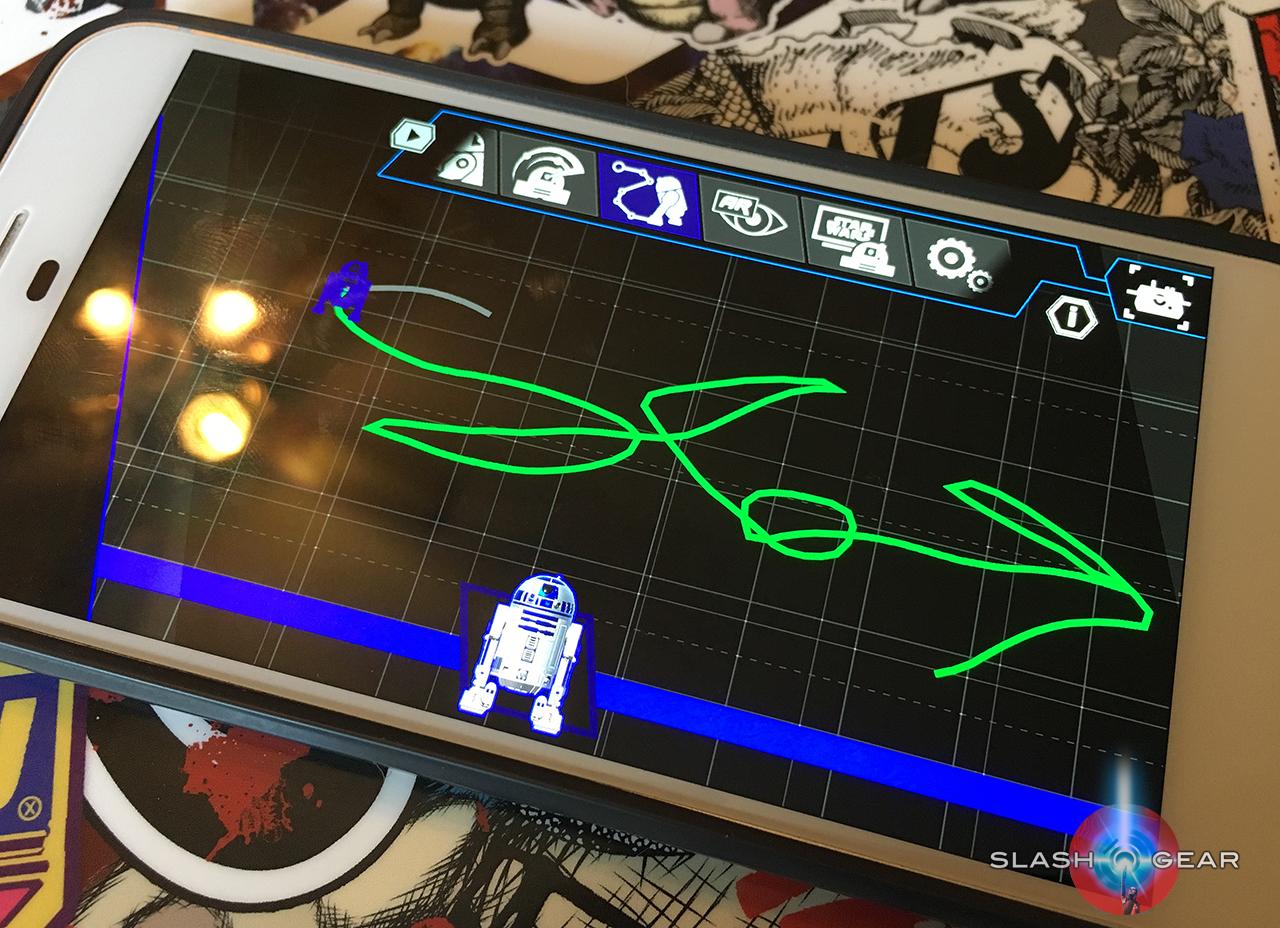 The Star Wars Force Band from Sphero also works to control R2-D2 much in the same way it works with BB-8. See our full Force Band by Sphero Review to learn all about this radical piece of hardware. 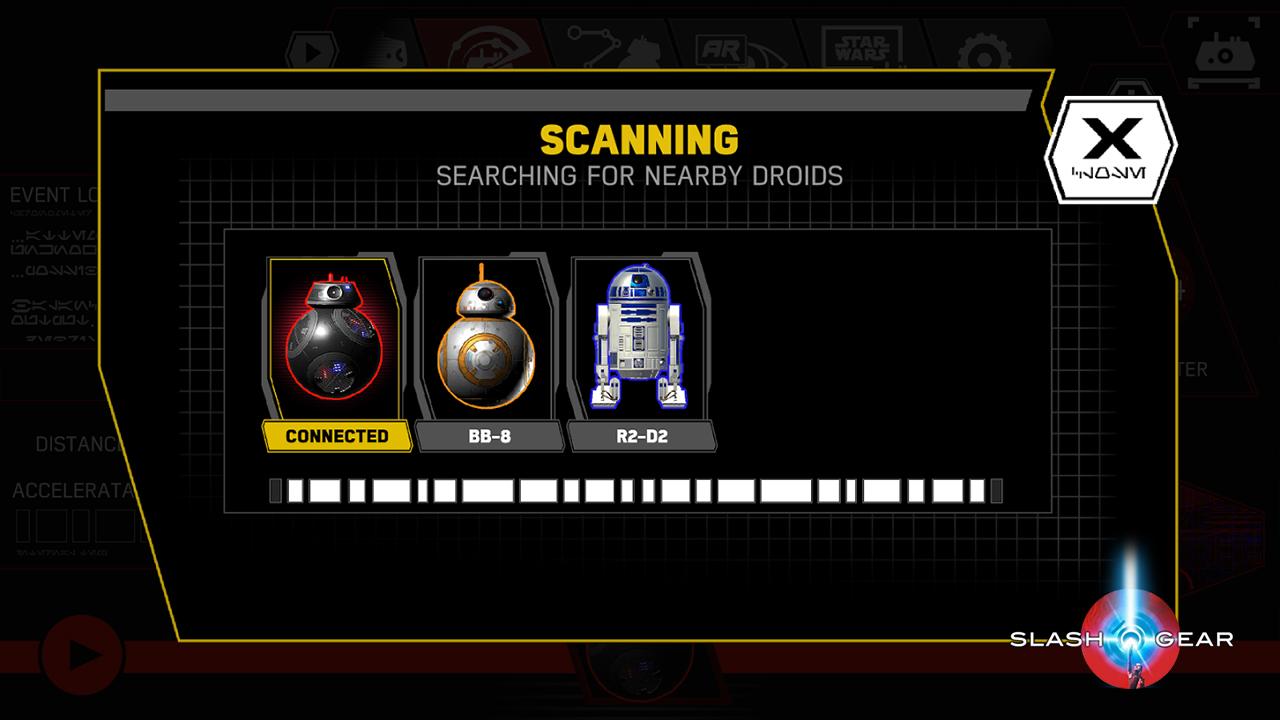 The new Star Wars app by Sphero allows users to connect to all three Sphero Star Wars droids at one time. This includes BB-8, R2-D2, and the other rolling ball droid BB-9E. Three droids can do several activities all at once, while some controls are relegated to one droid at a time. 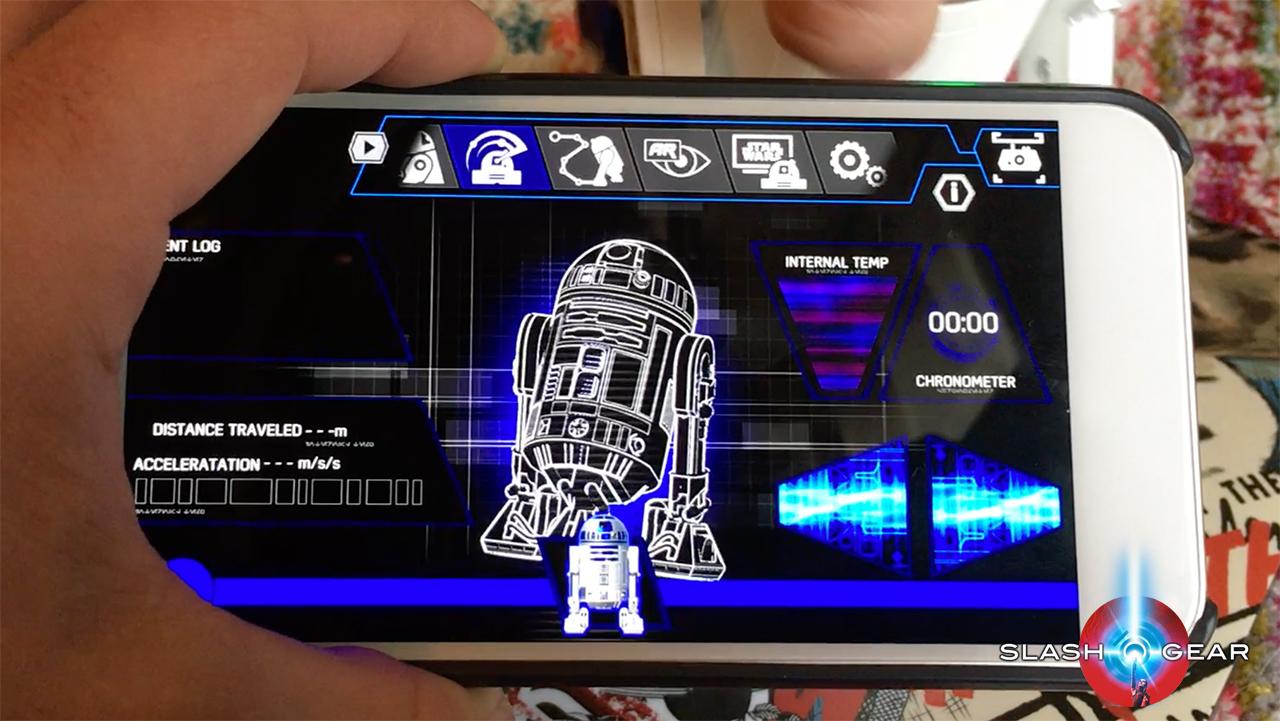 All three droids can be sent out to patrol at the same time – and each will forge their own path as such. Drawing a path and using the joystick to control a droid only works for a single droid at one time. All three droids can watch a Star Wars movie all at once, and all three will react to different moments in the film with different movements and sounds.

R2-D2 reacts to the Star Wars movies as they’re played within his hearing range. That means your smartphone needs to be on and listening within your television’s speaker range, and R2 must be within range of your phone. Once that’s accomplished, the magic begins.

At the moment, R2-D2 reacts only to The Force Awakens. Sphero’s plan is to add the original trilogy of films in the near future. If you’ve got an R2-D2, BB-8, and the other new droid BB-9E, you can set the whole lot up at once to watch Star Wars films. Films available to watch and react to at launch include The Force Awakens, Rogue One, and Star Wars: A New Hope.

Dev Software and Ease of Use

For the software-savvy, R2-D2 works with the Sphero SDK that can extend his abilities well beyond the basic app. Every movement, light, and sound available in or on R2-D2 is available to the user. Set R2-D2 up to whistle whenever you get a message on your phone – make his light flicker between red and blue whenever you get a notification. 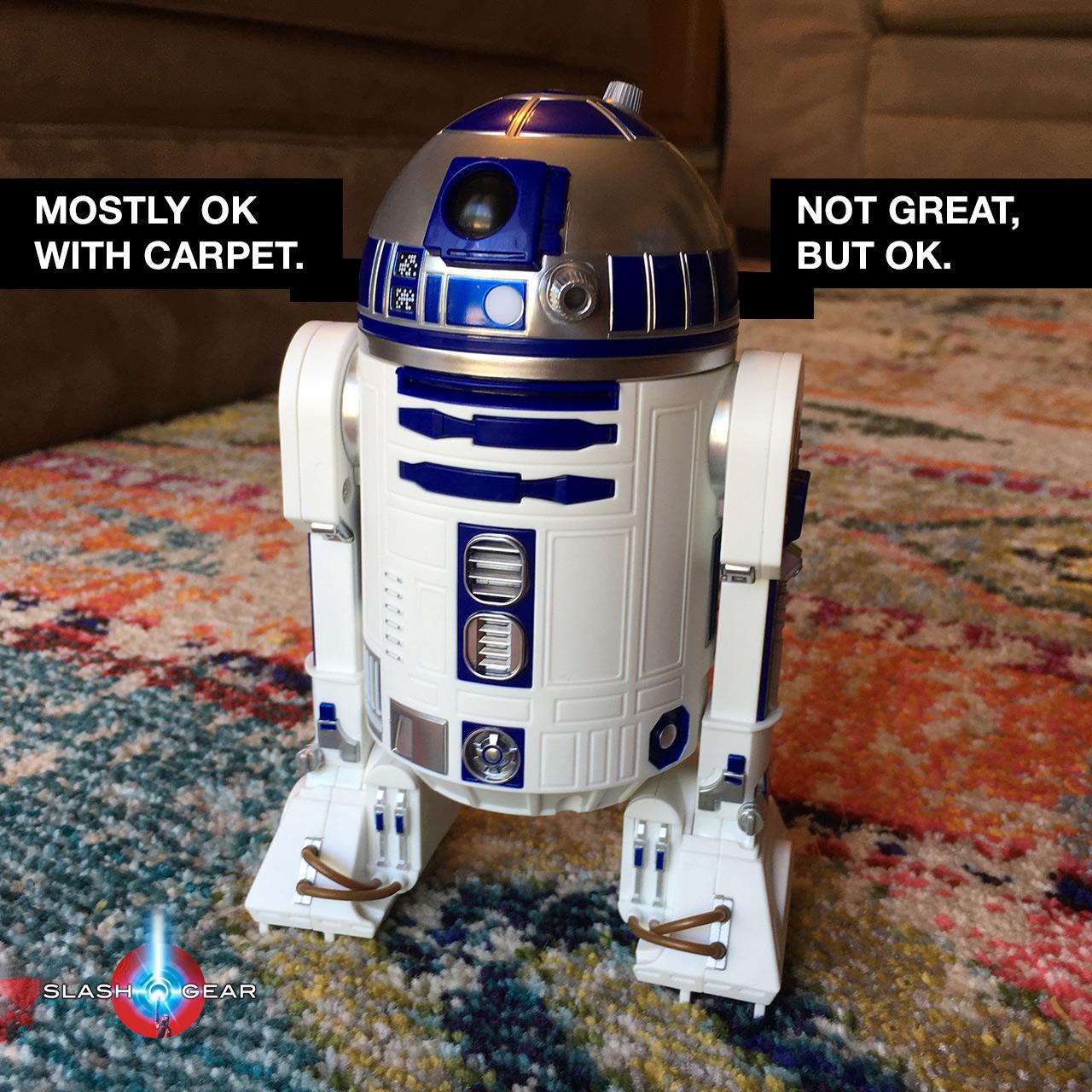 The average user will find the Sphero’s R2-D2 quite easy to control and enjoy. The app is comprised mostly of symbols, allowing anyone to get a handle on R2-D2’s movements and abilities with a few taps. Probably the most difficult part of this whole robot is making sure he’s connected to your phone or tablet before setting him out to patrol – and that’s pretty easy, too. Once connected, R2’s a breeze for users of all ages.

BB-8 by Sphero was a dream come true for fans of The Force Awakens. Sphero’s R2-D2 is pure wish fulfillment for every fan of the original trilogy (and beyond).

This is the closest we’ve gotten to owning a real R2 unit – without all the fuss of having to find a place to store a life-sized droid. If you have a Star Wars fan in your family or extended friends group, any sort of Star Wars fan at all, this R2-D2 by Sphero is the ultimate gift.

R2-D2 by Sphero is set to be available from a variety of stores immediately if not soon. Sphero’s online store, Apple Stores, Amazon, Best Buy, Target, and Disney Stores are all onboard with this magical piece of hardware. R2-D2 is just a bit pricier than his spherical brethren, coming in at approximately $180 at launch time.