The artist / designer known as Futura 2000 has executed a rather interesting set of collaborative projects in his lifetime, painting a portfolio of historically significant cross-overs that’s lead him straight to Samsung. The folks at Samsung took the opportunity very recently to team up with Futura for the first time to present a unique use-case for the Galaxy Note 10.1 (tablet with S-Pen stylus) and its major potential in the hands of this creative icon and legend. In our interview we found that though Samsung presents this man as a larger-than-life hero here in their second collaboration (here using the Galaxy Note II as a central device), he’s actually quite the down-to-earth conversationalist, and has shown his approach with the Galaxy Note device series to be made with the same intrigue as your everyday average gadget enthusiast.

The Galaxy Note II event in New York City introduced a project Futura and Samsung would present together immediately following the main keynote that headed off the night. The night ended with a Kanye West concert, but not before Futura’s crowd-sourced digital mural was crafted live as the Samsung press and special guests filtered in to the venue. Made of a vast collection of guest-created images collected from Galaxy Note II devices throughout the night, the artist made one wild amalgamation to shine on its many contributors. 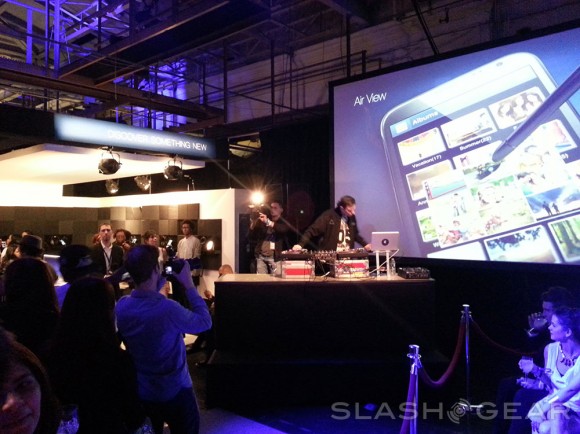 In the hands-on period between the keynote and the concert, Futura sat at attention yet very obviously relaxed in the center of what was essentially a mad rush for touches on the newly available devices. A darkened club atmosphere, bright lights and colorful devices, and the artist in the center of it all, wearing dark pants, sneakers, and a white t-shirt with a leopard print pocket. His demeanor was that of a wise worldly fellow mixed with the seemingly unending hunger for staying on-point with not just his own artwork, but the most interesting and fabulous tools with which to do it.

That’s where Samsung comes in. 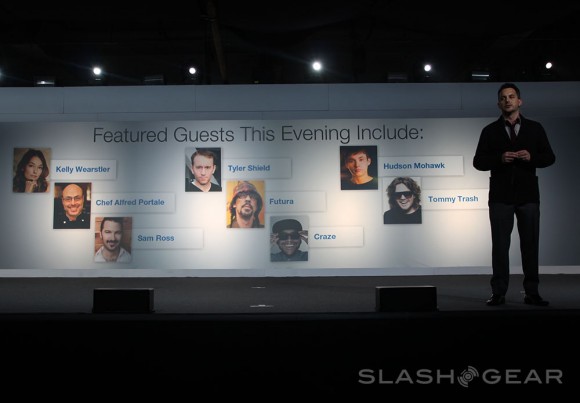 Above: Samsung’s Galaxy Note II keynote shows the collection of creative partners they’ve got ready to speak on the features of the Note series at the event.

Futura: They’ve asked me to speak on the creative possibilities on the tablet – specifically with the S-Note function and a lot of the different stuff you can do with the device. Kind of like a paint program, but it’s quite intense. I just got my device recently and within a few days of just messing with it, without even a formal walk-through, I felt like the device was intuitive enough to figure out, and I was able to do some really cool stuff.

Also the pen, itself, is amazing. I’ve worked with tablets before, whether its… you know, other names I don’t need to mention. Those always married up like a mouse. You do what you do with it… *clicking, mouse-movement gesture* within the tablet.

This is quite different.

The intensity, the sensitivity – I was messing around with something and it looked just like I spray painted it! 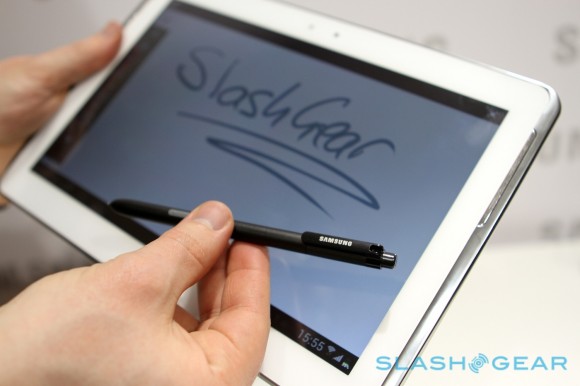 SlashGear: Have you gotten to use the Note II extensively yet?

F: Ah here, actually, I’ve got it in my back pocket. We’re gonna get plug in on it pretty soon and they’re gonna project my screen on to the monitor there and just go at it.

SG: I [Chris Burns] just got it too and reviewed it for SlashGear – it’s really nice, feels really good. [see our full review of the T-Mobile Galaxy Note II right now if you do so please] 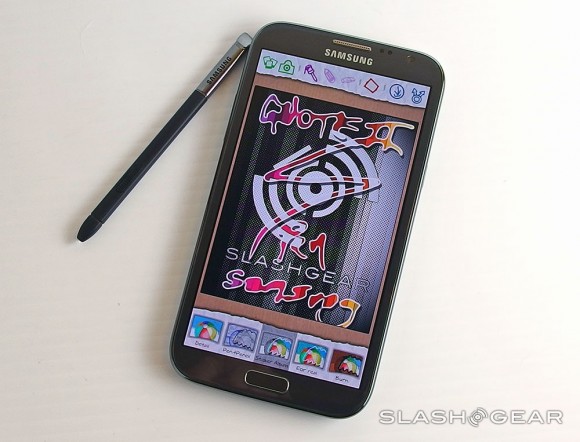 SG: Your career path has been many different places – it’s always been interesting to see you delving into working with brands. Lots of different brands – designing a bike here, or this or that there – do you see yourself continuing to do that now?

With Samsung specifically, how do you see that affecting your art career?

F: The one thing about Samsung I’m kind of excited about – obviously – is – yeah there’s a list of companies that I’ve collaborated with, put my name on their product, bla bla bla – but I’ve never been [with] a tech company. And one of the biggest tech nerds out there – ever since my advantage, I guess, of going to Asia, for the rest of the whole swarm, I was always into gadgets and stuff like that.

I spent tons of money on all the kinds of stuff. Probably had every phone, PDA, you know, that’s probably been out there – if it’s cool, I may have got my hands on it, you know, as a consumer. So finally, [I get] to work with a brand that’s got a product that I can really use. 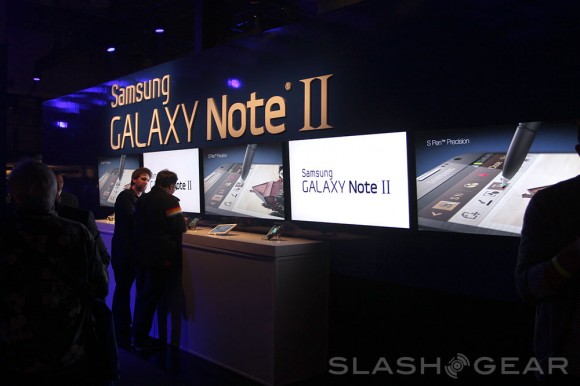 At this point Futura hails a server that’s been circling, asking quite politely if he can have two of the spring rolls she’s been serving to the crowd. In such a laid-back environment that this man creates, we can’t resist grabbing a roll as well.

F: There we go! Thank you so much, I’m going to dip this one, *dips from the sauce presented thusly*, thank you!

So all the collaborations. You know, the bike collabo, that makes sense, I guess, you know, Nike. CK1, that was like 6 years ago – maybe not so much. But you know, Samsung though, yeah, this is awesome.

And what I was saying is – you can do some stuff on this device that you can export out. I mean, you know, what, I got an idea for a painting, or a design sketch thing. It’s like other devices can’t just do that. This could be a very interesting addition. 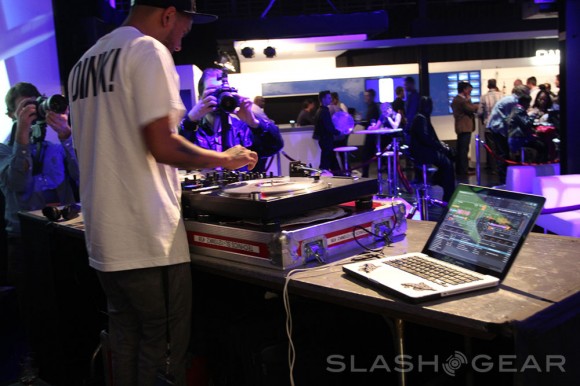 Above: DJ Craze – another of Samsung’s special guests – lays down a few fine musical constructs for party attendees.

F: Yes. I do. I have a – I mean I subsequently closed my shop in Japan. You know, I had a shop in Japan where I was making stuff and putting my name on it. And thus those products are from, you know, my brand. But now, no, I’m actually kind of no longer doing that. However –

Skye, grab these foodie people! *Futura once again hails a server via his partner* 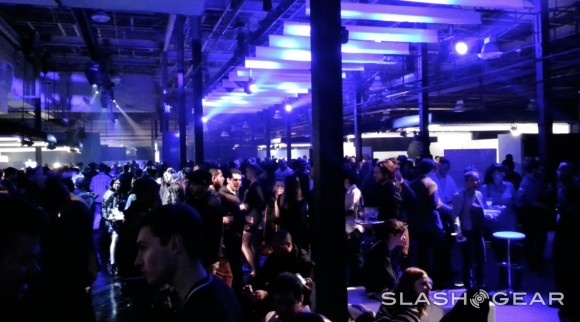 Above: The crowd gets thick at the event right before the Kanye session is about to begin.

F: But yes I understand that the Futura signature was once a graffiti tag on the walls of New York subways is now a brand. And I’m cool with that actually. I mean I’m not – I’m choosing these collaborations based on, obviously, what it is, not what the pay day is.

And to some degree, it’s not like – and as I say now, I had to close my store. It’s not like my motive is to manufacture things, put my name on them, you know – I want to pursue my art career. And I recently had a show in New York about a month ago.

I’m trying to get out of that lifestyle, get back into painting. 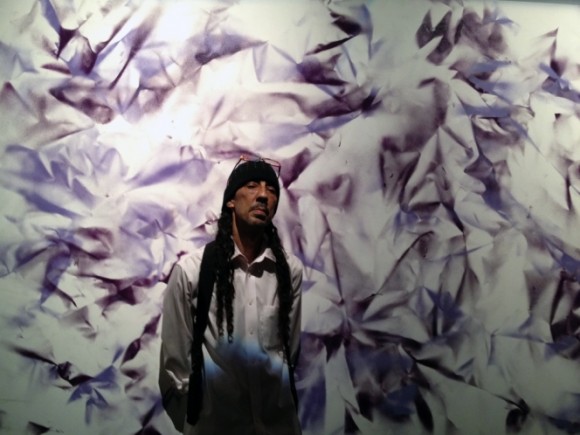 Above: Futura poses in front of one of his works of art at his recent show: Future-Shock at Valmorbida in New York. Image via 12ozProphet.

Stick around SlashGear for our continued interview series with the top minds in many industries and of many different disciplines, each of them making use of the technology that makes our modern world great. With an artist like Futura creating greatness with a device like the Galaxy Note II as a tool, the tool’s potential shines like a beacon for all to see – and want. Expect tech companies to continue with this trend in the near future – and keep an eye on Futura as he moves into tomorrow right on the cuff with creative intent.