Samsung is moments away from a true iPad alternative

The next game-changer in tablets could come from Samsung, not Apple, as a perfect storm of processor, screen and platform coalesces to make the Korean firm an innovator not a copycat. Samsung has already demonstrated its abilities in processors – even Apple would have to agree with that, having co-developed the A4 chipset powering the original iPad with its Korean rival – but the new Exynos 5 Dual raises the bar significantly; according to the rumors, meanwhile, that will find its way into the Samsung “P10”, a new uber-tablet packing a display that squarely challenges Apple’s Retina tech.

The P10, it’s believed, will arrive sometime in 2012, with an 11.8-inch WQXGA screen. If you’ve not been keeping up to speed with your acronyms, that means 2560 x 1600 resolution for a pixel density of 256ppi; in contrast, Apple’s new iPad has a 9.7-inch screen with a 264ppi pixel density. At those sort of levels, a handful of pixels either way probably isn’t going to swing it, meaning both tablets will likely be as easy on the eye when it comes to graphics.

The 2560 x 1600 number is interesting, because it’s the figure Samsung has been shouting about with relation to the Exynos 5 Dual, the latest SoC (system-on-chip) off the Korean firm’s semiconductor lines. Although only a dualcore, rather than the quadcores we’ve seen from NVIDIA and others, Samsung steps up to an altogether more advanced type of processor, the Cortex-A15, which means that – on paper at least – the Exynos 5 Dual will be more potent than any of the chipsets currently on the market. In fact, Samsung says one A15 core is between 1.5x and 2x faster than the A9 NVIDIA is currently using. 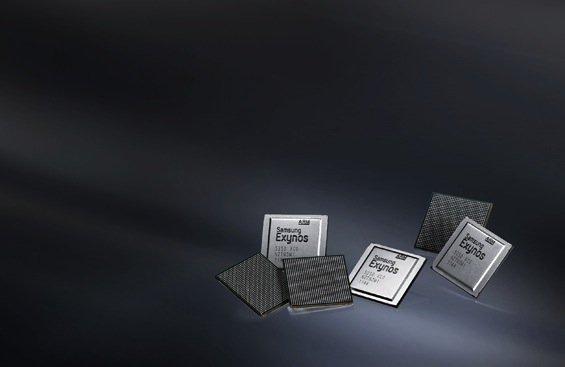 So, Samsung has a pixel-dense display – one we have high hopes for, too, given the company’s track record in panel technology – and the processor to drive it, but that’s not the extent of the new Exynos’ abilities. In fact, running such a screen is really just the baseline. The Exynos 5 Dual is able to overlay a live UI onto a 1080p HD video, while simultaneously processing a live camera preview feed, encoding video in the background, and driving a separate display via HDMI output. Most users will never require that exact mixture of tasks, but it does suggest that the new Exynos will be smooth as melted butter in everyday use.

Samsung has been taking a pasting in the courtrooms of late, Apple turning the company’s own design research against it as it sets up a case of design theft. Performance in the marketplace is also questionable, with Samsung’s healthy shipment figures potentially masking altogether more pedestrian sales of devices like its Galaxy tablets.

Yet it’s not all bad news: the new Galaxy Note 10.1 looks set to build on the perhaps surprising degree of interest around the original Galaxy Note, and Samsung’s promotional campaign for the pen-enabled tablet suggests that the company might finally have got the message that functionality in context is just as important, if not more so, than how well-packed your spec-sheet is.

Samsung’s big challenge, then, is not to get sidetracked by the pure specifications of its new slate behemoth. The company needs to tell us why we need tech that previously it might simply have hoped to hypnotize us with.

Much of that will depend on the platform the tablet runs. So far, the rumors haven’t pinned down OS, though there are two key possibilities: Windows 8 (or, more accurately, the ARM-specific breed, Windows RT) or Android. With Jelly Bean, building on the solid groundwork of Ice Cream Sandwich, Google’s platform is finally feeling up to speed for tablets; our experience with the Nexus 7, which runs Android 4.1, suggests that Android has – after the abortive mess of Honeycomb – eventually come of age on larger displays.

Samsung has woken up to context. It is either realizing or being forced to comprehend that delivering products that look like they’ve been borrowed from Apple’s alternate-ideas pile isn’t good for business: customers don’t want copycats, and if they want something that looks like an iPad (either in hardware or software, or both) then they’ll probably just buy an iPad. Yet the tablet market is still relatively immature and, like Microsoft’s emphasis on content creation with Surface, there’s more than one way to skin the proverbial cat.

With Jelly Bean, Android finally feels as smooth in operation as it needs to be. With the Exynos 5 Dual, Samsung has a chipset that can translate that smoothness to a tablet. With a 2560 x 1600 display, it can compete on shelf-appeal, rather than being the pixelated also-ran behind the new iPad. As long as it tells us why we really need it, Samsung could have the next big tablet hit on its hands.