As it’s been made abundantly clear by the invitations to the Berlin-based IFA 2013 event and today’s Times Square set-up in New York City, Samsung is holding a special event for the likes of the next Galaxy Note. This event has also been teased to contain the first official announcement of Samsung’s Galaxy Gear, a smartwatch device aimed at pairing with your smartphone, Galaxy Note, or whatever other Android-based device you’ve got in your pocket.

While the Berlin-based event will likely hold both hands-on time with the devices being revealed as well as an on-stage keynote presentation, the New York event is set to be something (almost) entirely different. While we’ll see a tent with products for hands-on time on the part of the public, we’ll likely also be seeing some musical performances before and after (or maybe just during) the event in Berlin. 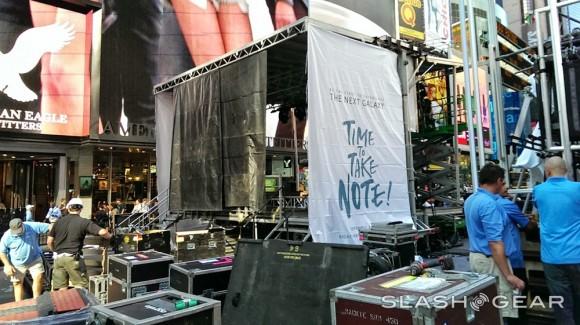 When the Samsung Galaxy S4 was launched (in New York City, no less), there was a similar Times Square event in which the main event was broadcast on several massive displays. After the Galaxy S4 keynote was complete, everyone and anyone off the street had an open invite to get all the hands-on time they wanted (within reason) with the new device.

This public showing is also – interestingly enough – set to take place near a massive Motorola Moto X video billboard. It seems that it’s no mistake that Google and/or Motorola decided to rent space from the billboard from American Eagle the same week Samsung was set to have an event directly below. The billboard currently shows American Eagle, The Ellen DeGeneres Show, and Moto X advertisements one after the other.

It should also be noted that HTC wandered the streets at the Samsung Galaxy S4 event promoting the HTC One. LG also came to play with the Galaxy S4 back in March by parodying Samsung’s billboard with one of their own, promoting the original LG Optimus G. 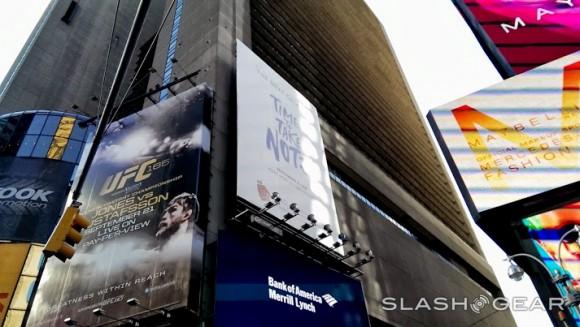 Meanwhile in Berlin, IFA 2013 is also going on this week. SlashGear will be bringing you the Samsung event from Germany as well as all the hands-on action you could desire (supposing you’re not in NYC tomorrow) and will be covering the rest of the global electronics show for days – stay tuned!