Nokia Windows Phone: Everything you need to know

Nokia’s news today that it would be adopting Microsoft‘s Windows Phone may have fit in with the rumors, but it still met with significant surprise among industry and users alike. On the surface it looks a lot like the Finnish company has sacrificed independence for short-term survival, though both Nokia and Microsoft argue that this is in fact the beginning of a far more symbiotic relationship. After the cut, everything you need to get up to speed on the new Nokia Windows Phone agreement.

In a move that will delight some and infuriate others, Nokia has basically given Symbian its marching orders. The company still expects to sell 150m Symbian devices over the next year, if not more, but Windows Phone – initially Windows Phone 7, and then future iterations of the OS – will take over as Nokia’s primary smartphone platform. Symbian will shift into a “franchisee platform”, with Nokia offering it to OEMs still enamoured by the software, but Nokia-branded Symbian devices will be phased out during what the company has described as a “transition period” in 2011 and 2012.

Similarly affected is MeeGo, which Nokia intends to push back into the labs. One MeeGo smartphone will see a release in 2011, as promised late last year, but after that the platform will be treated as an engineering project for research into “future disruption in the mobile ecosystem.” According to Nokia CEO Stephen Elop, MeeGo development simply wasn’t happening quickly enough to pick up the slack where Symbian’s market appeal was fading. 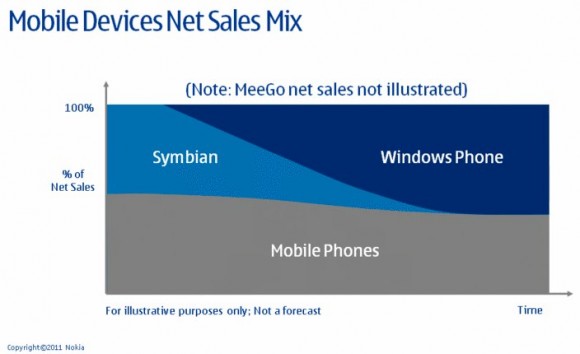 So, if Nokia is in the process of phasing out Symbian and marginalising MeeGo back to the labs, what is it left with? From what we know, the company has cut the best licensee deal with Microsoft to date, though that’s partly because this isn’t a regular OEM/software relationship. To get Nokia’s prodigious hardware strengths and global reach on-board, Microsoft has promised “significant” investments in engineering and marketing. Neither company is talking specific figures, but the talk is that it’s in the region of “hundreds of millions” in a pre-deal battle between Microsoft and Google to win Nokia’s hand. 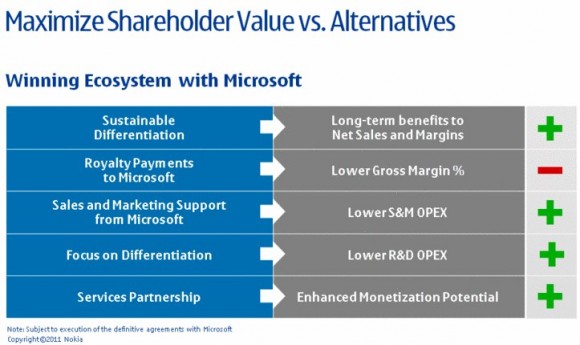 In return, Nokia will get hitherto unseen flexibility in designing Windows Phone devices. Microsoft has, with its initial tier of OEM licensees, set strict guidelines on minimum hardware requirements: that’s why every Windows Phone 7 device on sale now has the same 1GHz Qualcomm Snapdragon processor, the same WVGA screen resolution, and the same button layout. What Nokia is able to do, however, is customize pretty much the entire OS, along with make broader decisions about hardware.

That plays to Microsoft’s hand, however, and to the other OEMs involved. Part of Microsoft’s gain from the deal is the prospect of pushing Windows Phone down to cheaper entry points and developing markets, outside of the current narrow segment devices from HTC, Samsung and others cater for. If the platform is to take on Android, which has quickly become a firm favorite among low-cost device manufacturers, then that sort of diversity is essential.

Meanwhile, Nokia’s software engineers will be injecting some of the company’s services creativity into the OS, and feeding those developments back into other OEMs. Stephen Elop said that Nokia will be “actively encouraging” other vendors to follow suit, and being cautious over making changes for the sake of it so as to ensure as much platform consistency as possible. There’ll also be benefits from Nokia’s existing services, not least NAVTEQ and Ovi Maps, the technology of which will be fed back into Bing Maps, while Nokia devices will get access to Xbox Live and Microsoft Office. Engineers from both companies will work together on future services and OS changes.

The story for third-party developers is not quite so clear. Nokia’s Ovi Store – and its global billing systems – will be rolled into Windows Marketplace, which will certainly be of assistance to Windows Phone developers, but the outlook for Symbian developers is less bright. There’ll be no port of Qt to Windows Phone, which Elop suggested might take away from the perception of platform strength, and the Symbian market will inevitably dip now that Nokia is stepping back from it. Microsoft will be pushing its own tools for software developers, but the two companies will likely have a battle on their hands to retain long-time developer advocates.

The big question, then, is when we’ll see the first retail sign of this new partnership, and that’s a question Elop wasn’t ready to address. Initial devices will, he revealed, be the Frankenmonster combination of hardware and chipset designs originally cooked up by Nokia’s MeeGo team, with smartphones intended to follow the single 2011 MeeGo release being “repurposed” for Windows Phone. Meanwhile, the company has put out its industry feelers for the latest in chipsets and radios, though Elop says we’ll have to wait through the coming “weeks and months” before there’s any specific announcements. 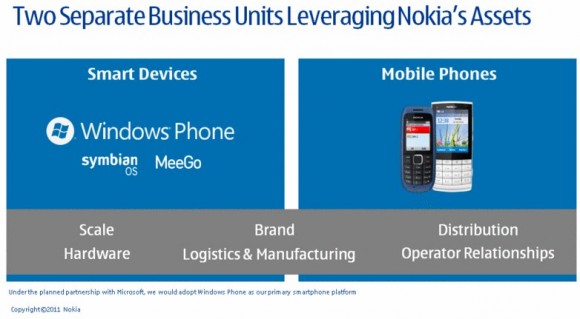 When they do arrive, though, we should expect more than just a trickle. Nokia has always played big when it comes to device ranges, and Windows Phone promises to be little different. While the transition in 2011 may mean a relatively small amount of handsets, Elop promises “a large number of Windows Phone devices over a variety of price points” in 2012, which is when the flood should begin in earnest. The company is also looking at the possibility of MeeGo, Windows or other platforms for tablets.

S40 and S30, meanwhile, will continue to be used by Nokia’s Mobile Phone division, for the low-end market. In fact, Nokia plans greater R&D investment into this segment, in an attempt to wrench back some market share from cut-price far east rivals. That means new, cheaper chipsets and more competitive radios. 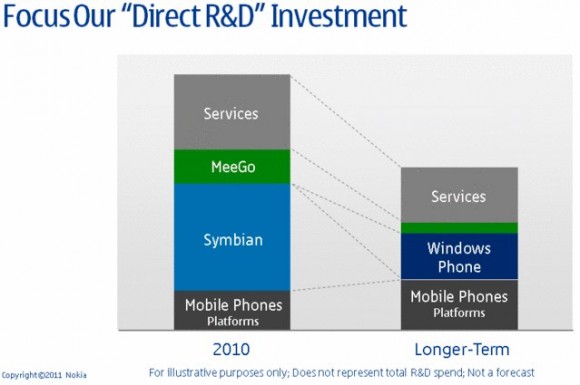 While the outlook for both Nokia and Microsoft will continue to be debated, there’s certainly an opportunity for the two companies to produce some stand-out hardware and software. Nokia’s problem has never been physical design, construction or specifications with its smartphones; its struggles in the North American market have been down to software and carrier reluctance. Meanwhile, Windows Phone has arguably failed to make the splash Microsoft expected because the strict regulations has resulted in a line-up of me-too devices. If together they can inject some stand-out interest in hardware and fast-track the software sparkle – Windows Phone 7 has only been on the market since October 2010, after all – then they could stand a good job of establishing the “third ecosystem” Stephen Elop described.