Nest Audio vs Sonos One vs IKEA Symfonisk – Speaker Wars

There’s no denying that the Nest Audio fills a sweet-spot in Google’s smart speaker range. Long-anticipated replacement to the original Google Home, the new speaker delivers markedly better sound quality than the Nest Mini, but a much more affordable price point – not to mention smaller footprint – than the Google Home Max. No product lives in isolation, though, and the most common question I’ve been getting is “what about Sonos?”

Once upon a time, Sonos was absolutely the premium option in any multi-room home audio argument. More recent years, however, have seen the cost of entry brought down considerably, particularly when the partnership with IKEA brought Symfonisk to market. 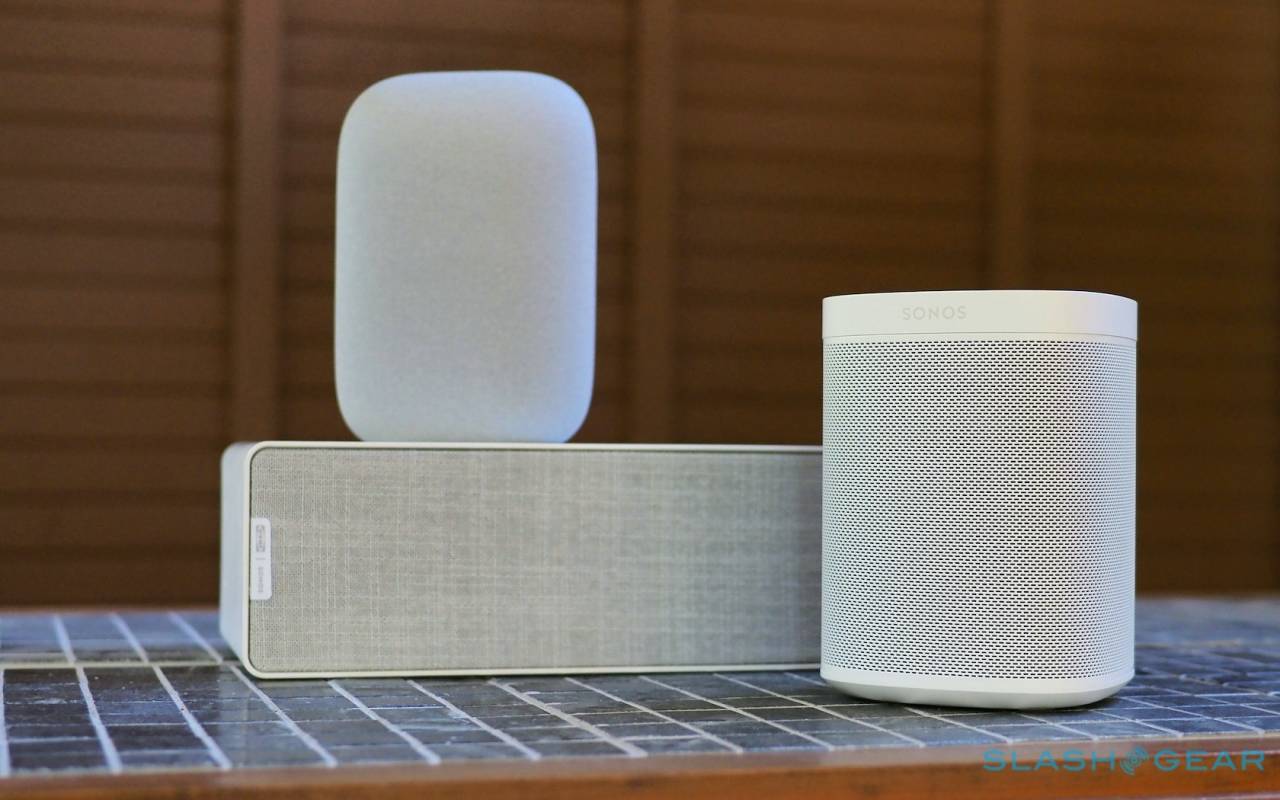 Sonos has a smart speaker with Google Assistant support, the Sonos One. It’s $199, compared to the $99.99 of the Nest Audio, but has – among other things – the advantage of being switchable between the Assistant and Amazon’s Alexa. The IKEA Symfonisk bookshelf speaker, meanwhile, is $99, making it the cheapest of the three, but since it uses Sonos’ platform it’ll integrate just like any speaker from the company, and can be controlled using the Sonos app.

Having had all three side-by-side, though, it’s become clear that this is a decision based on more than just price. There’s no one, perfect speaker here. Instead, you have a decision to make.

The reason Nest Audio sounds so much better than the old Google Home is down to drivers: namely, two of them in the new speaker, versus just one in the old. Google Home had to rely on a single driver for the full frequency range, and passive radiators to try to boost the low end. Nest Audio, in contrast, has a separate woofer and tweeter, and the result is more bass, better high-end clarity, and a more precise sound profile overall. 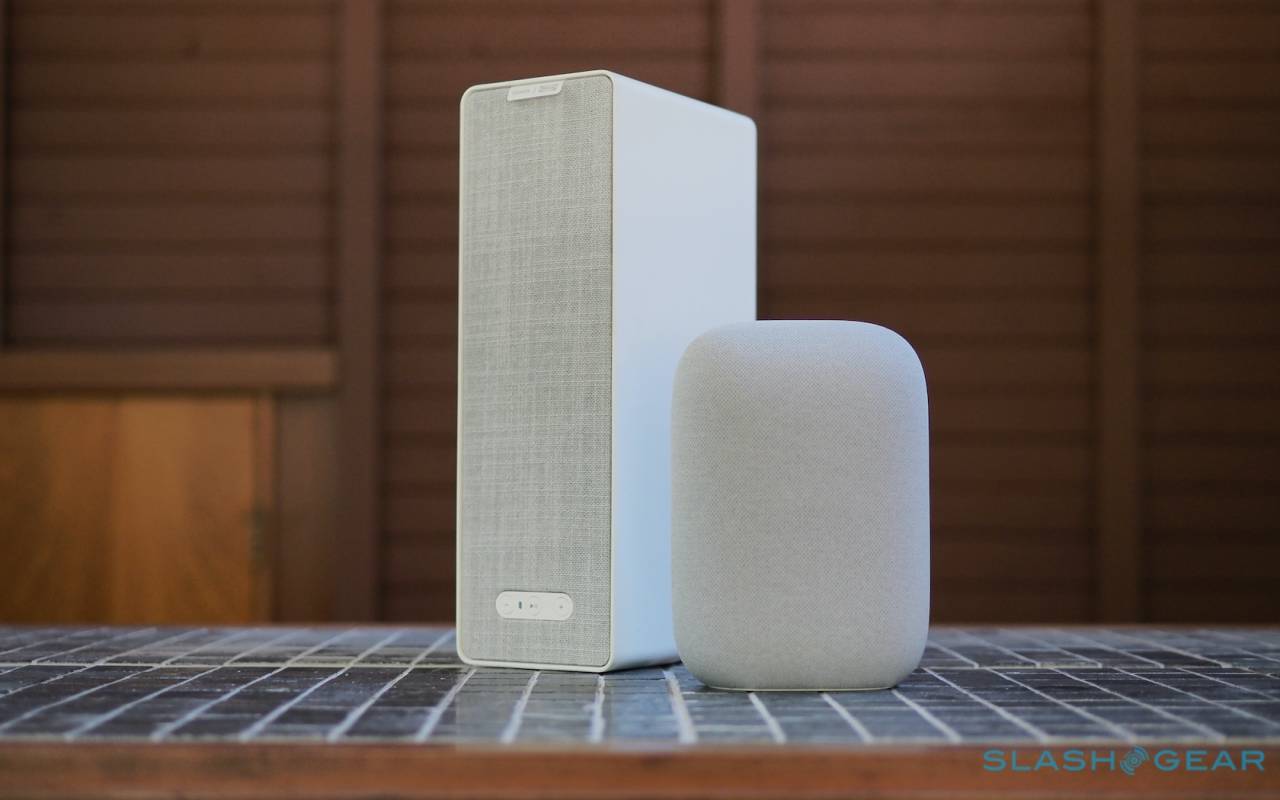 While it’s better, there’s still physics to consider. Although you get more bass, you don’t get lots of it, as tracks with hefty low-end make clear. The Nest Audio are more balanced than their predecessors, but side by side with Symfonisk – whether individually or set up as a stereo pair as both permit – I found the IKEA speakers had a little more low-end.

The Nest Audio, in contrast, has a broader soundstage, which is possibly due to the design of its tweeter housing. You lose less of the clarity and crispness of vocals as you move off-center from the speaker. 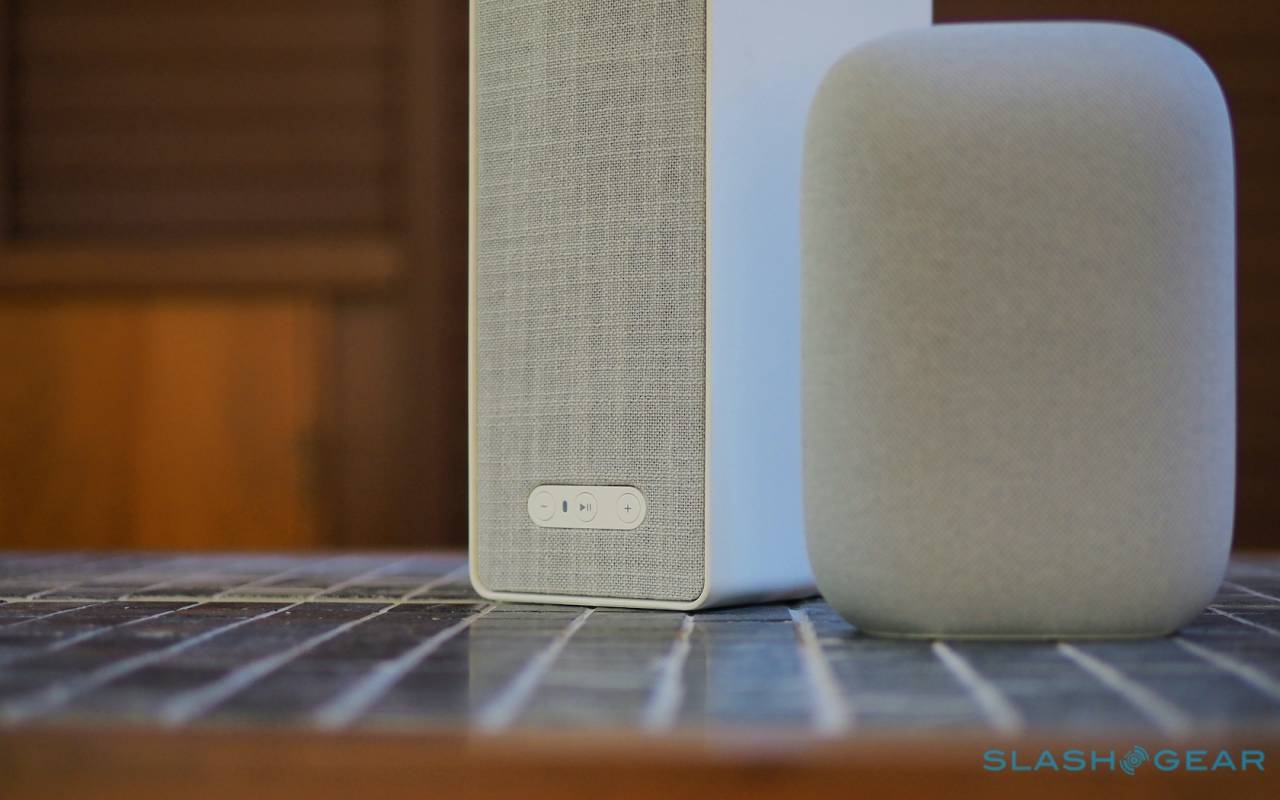 The biggest contrast, though, is the Google Assistant. Or, more accurately, its absence in the IKEA Symfonisk. Though that can be controlled, like all recent Sonos speakers, via speech commands through the Assistant, it doesn’t have standalone support baked in, or indeed microphones of its own.

All that means is that the question you should be asking yourself is whether you prefer a little more bass, or the ability to hold a conversation with your speaker. If you’ve already got a smart speaker in the room, or you don’t mind just reaching for the app, then a Symfonisk might be better. If you’re making a stereo pair, though, Google’s current deal that trims $20 off every two Nest Audio you buy – bringing that down to $179.98 – is hard to argue with.

Nest Audio vs Sonos One – the price of bass

If you want a Sonos smart speaker, your cheapest port of call is the Sonos One. Initially launched with Alexa support, you can now choose whether you want Amazon or Google to be listening out for your commands. The downside is that you can get two Nest Audio for less than what a single Sonos One will set you back. 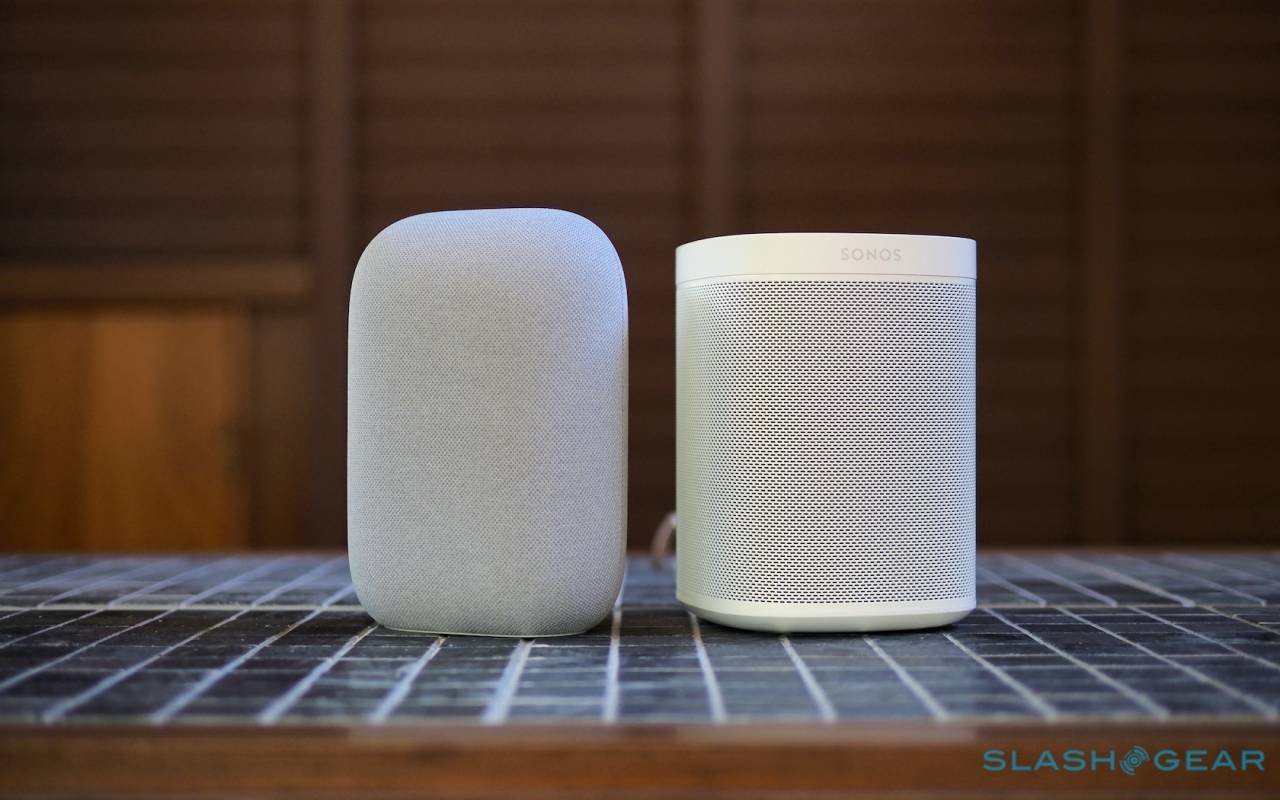 That’s a lot to consider, given the different sound profiles. Side by side, I found a single Sonos One clearly out-performed a single Nest Audio. It can go louder, there’s more bass, and after running through Sonos’ Trueplay tuning system it sounded more natural than the Nest Audio did.

Things got a little closer with a Nest Audio stereo pair, however. Compared to the single Sonos One that configuration is in price alignment with, suddenly you get a much broader soundstage, and more volume. There’s no extra bass, but that fact was a little easier to live with thanks to the overall volume increase.

Now, if you throw in a second Sonos One then all that’s for naught: Sonos’ system just plain sounds better. However it’ll also cost you almost $400, at which point you could’ve bought four Nest Audio and still have almost enough money left over for a Nest Mini, too.

Nest Audio is a compelling compromise 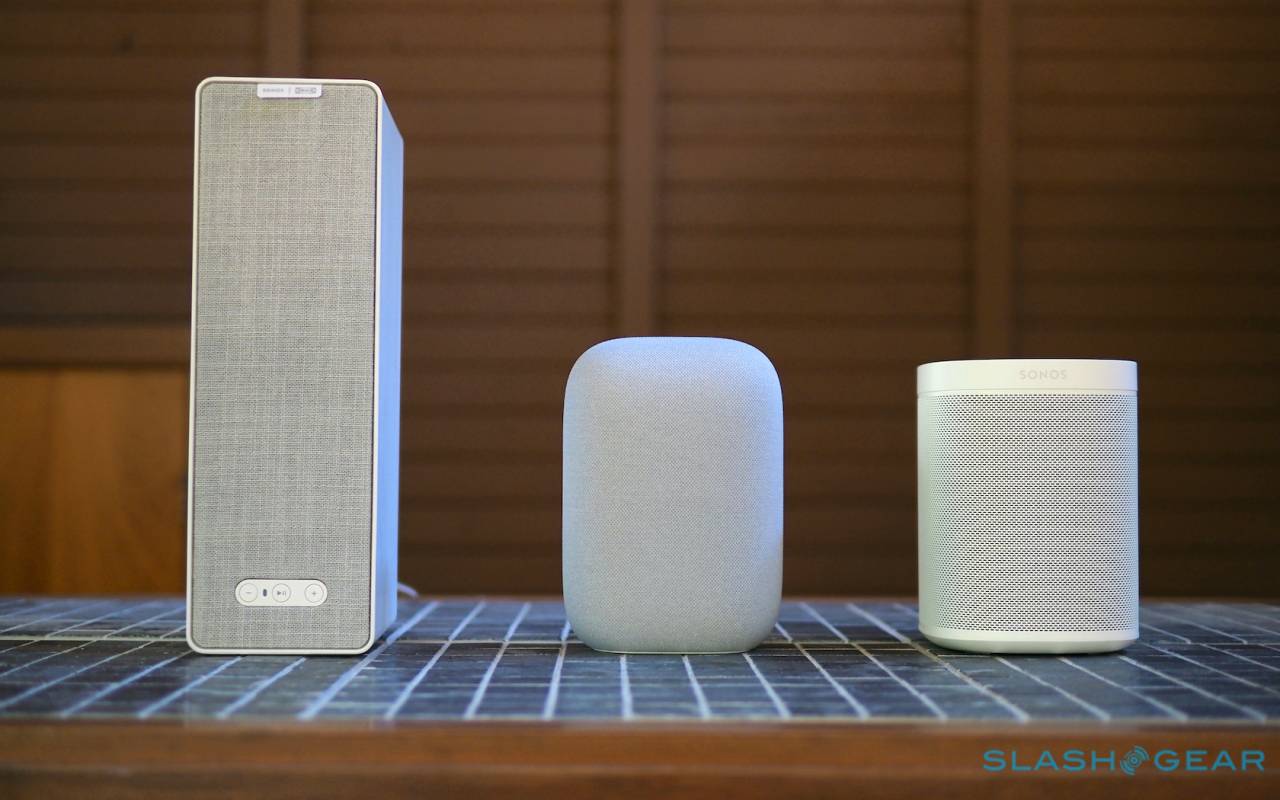 When it comes to the middle ground, it’s hard to argue with the Nest Audio. Making a decision will probably depend on what you’ve already got installed in your smart home. If you’re new to smart speakers, then spending $99.99 on a single Nest Audio is a sweet-sounding way to get in on the Assistant action.

If you’ve already got some way of interacting with Google’s AI, however, then it pays to consider your options more broadly. Part of that should include taking into account the sort of music you enjoy, too. If you’re into bass-heavy pop, RnB, rap, or other such genres, the Nest Audio’s low-end may not be enough. Jazz, classical, and vocal-heavy tracks, however, performed much better to my ears.