If you head to a Verizon Wireless store today looking to purchase an Android smartphone, you’re very likely going to be inundated by offers to purchase Verizon’s own unique DROID line. I’m here to tell you that the current top choices for these Motorola-made smartphones aren’t necessarily your best choice for Android or 4G-laden devices – in fact they’re not even really your best choice for Motorola-made devices on Verizon. Instead, have a quick glance at some comparisons to some lesser-advertised devices sitting right next to these hero phones to gain a better understanding of what Verizon really has to offer.

Instead of giving you a specifications run-down, what I’m going to do here is give you my “total package” view of what each device has to offer to you, the everyday user. I’ll speak about the displays, the buttons, the keyboards, and the version of Android they hold, sure, but it’s that one phone you’ll be purchasing, so it’s that one phone on its own that we’ll have a chat about. 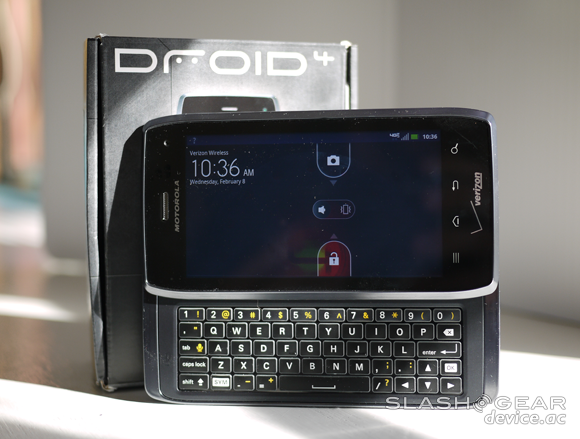 This is the fourth self-titled DROID that Motorola has put out, and it offers you essentially the same thing as you’ve gotten with each past DROID device – a push-out keyboard with real physical buttons, a lovely display, and almost the most recent version of the Android software. The keyboard on this device, if you’re in need of a full physical QWERTY that is, is the nicest one you’re going to find on the Verizon network. Aside from that, and especially if you have no need for a physical keyboard, there are much better choices for you, most of them costing you a whole lot less.

Check out our full review of the Motorola DROID 4 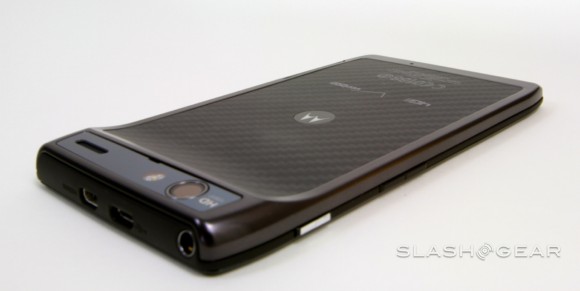 What you’ve got here is the fat version of the DROID RAZR, a device that was otherwise known as one of the thinnest smartphones on the planet. This thickness adds so much battery life that you’ll only have to charge up every two days instead of every night – and it costs at least $50 more than the DROID RAZR, and in one case $100 more – that depending on if you get a memory card inside the device. If you want the biggest battery on the market, go for the MAXX. If you want a purple smartphone, get the original DROID RAZR – and note that bot the DROID 4 and the DROID RAZR are a bit wider than most people’s hand palms, so be sure to hold it in the store to see if you’re comfortable with that.

Check out our full review of the Motorola DROID RAZR 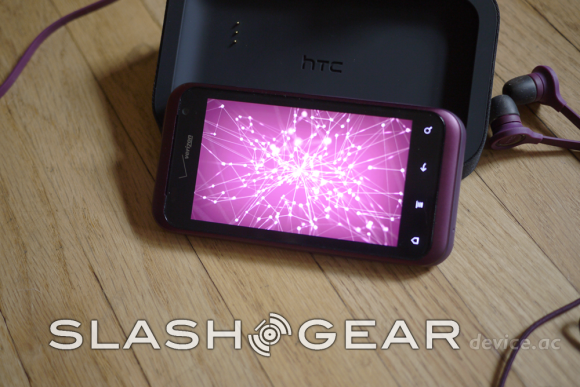 Actually there’s another purple smartphone here at Verizon, that being the HTC Rhyme. This little mouse of a phone has all the power and capabilities you might like from a larger top-tier smartphone with its only drawbacks being its unique aesthetics. This phone was made for the feminine crowd, having cuteness and fashionability to the core – and it’s free at the moment, too.

Check out our full review of the HTC Rhyme 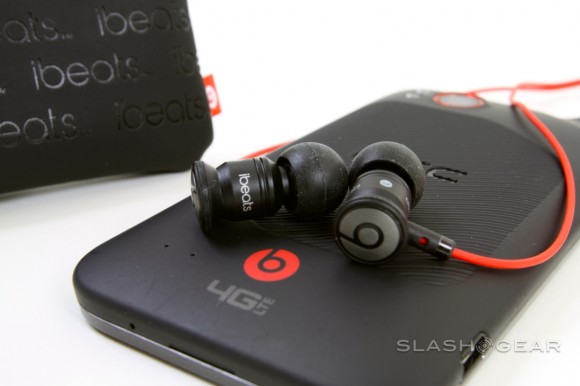 Though these two devices may appear to be similar, and indeed they are much more similar to one another than they are to the rest of the device on the network, the devil is in the details: if you want the uniqueness of the HTC experience and you’d like to avoid the fashion forward experience of the Rhyme, you’ll want one of these two – and I’d suggest the Rezound. The HTC ThunderBolt was a fantastic phone for me for quite a few months after it was released – indeed it is a classic HTC device – but the Rezound has as high definition a display as you could ever want, has excellent speakers and Beats-brand earbuds in the box, and isn’t reaching its “end of life” as the ThunderBolt is. Its kind of like when they stop selling a car at a dealership: they’ll still support you, but they’ll keep updating your Rezound for a whole lot longer. 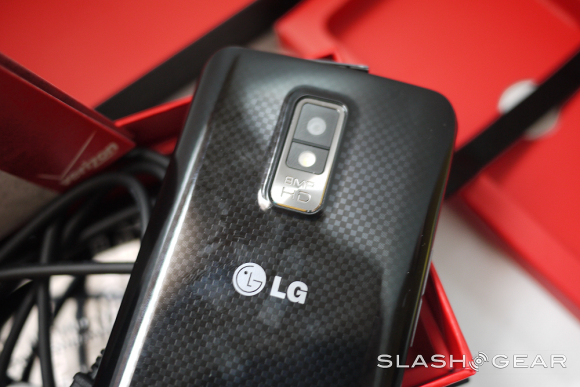 This device is the only LG device you should be considering. There’s also the Revolution by LG you can purchase used, but don’t bother with it – the Spectrum is going to be much more reliable for you in the short and long run. It also has a really great camera and an ultra-bright and ultra-sharp display on it as well. The only drawback here is, again, that it’s a pretty gigantic device, and might be uncomfortable for you to hold in one hand.

Check out our full review of the LG Spectrum 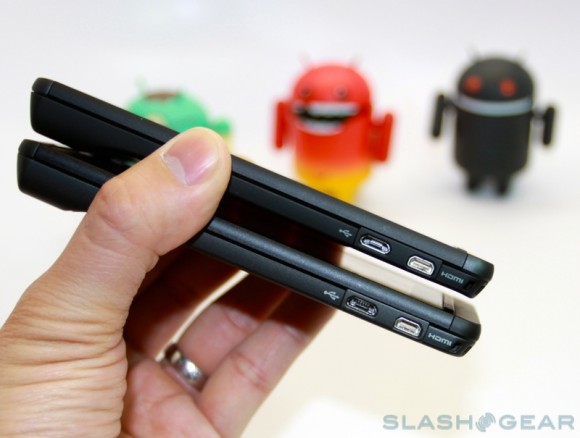 Check out our full review of the Motorola DROID X2 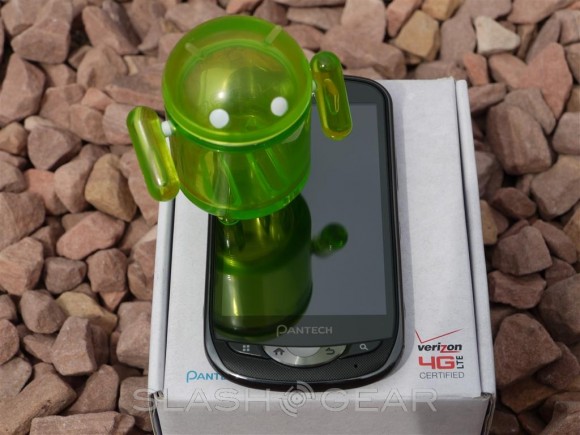 This device doesn’t get a whole lot of press because Pantech is really still only a small gunner of a manufacturer of Android devices here in the United States, but check it out: this device is certainly not the worst device on the carrier. It’s one of the last of its breed having a single-core processor inside, and the camera is only a 5-megapixel shooter on the back, but they’re both decent, and you can certainly play Angry Birds if that’s your winning combination.

Check out our full review of the Pantech Breakout

Soon you’ll no longer see the name “Ericsson” on Sony-branded smartphones, this one being one of their most famous combinations before Sony bought out Ericsson’s half of the business. This is the fabled PlayStation Phone, and with it you’ll be able to access a set of games only available to this device specifically. This device was also one of the two choices Google made for Gingerbread hero phone — in short, this means it works very, very well with the software its got running. This device is made for gamers, make no mistake about it, and it’s certainly fun to own.

Check out our full review of the Sony Ericsson Xperia PLAY 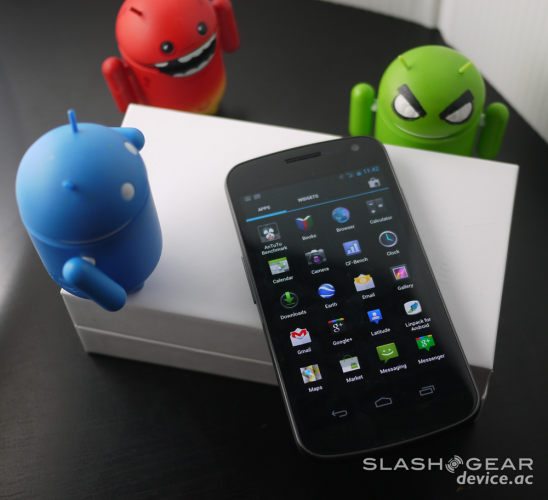 If you’re looking for the most advanced Android software, look no further than the Galaxy Nexus: Google’s hero phone for their newest mobile operating system Android 4.0 Ice Cream Sandwich. This device has many futuristic characteristics such as a massively high definition display, a button-less front face, and a sleek exterior, and it’s running a vanilla version of Android. This means that there’s no user interface changes made by the manufacturer or the carrier – though it does have a couple of helpful Verizon-added apps. This device is both Google and Samsung’s current hero smartphone.

Check out our full review of the Samsung Galaxy Nexus

If I had to choose just one device, I’d probably end up going with the Galaxy Nexus as I do love to mess with the software – and all Nexus devices are made to make that process easy. Other than that, I’d either choose the LG Spectrum for its camera or the HTC Rezound because its user interface and headphone branding makes it a nice full package. If I wanted a Motorola device, I’d pick the original DROID RAZR because its so incredibly thin and I’m constantly charging my devices anyway – look at that stack of coins in the lead image of this post – sharp!