The Motorola Moto X is out on the market across the United States, and only weeks after launch we’re being set up for a lower-cost option with the device known as Moto G. This device has appeared in the United States Trademark registration archive with word only of the possibility of it being a smartphone. Rumor has it that this is one of two Motorola smartphones being revealed in the span of the next several months, with a new flagship smartphone appearing for sale in early 2014. UPDATE: The Moto G is now officially out and detailed.

Word from overseas suggests that the Moto G is none other than the DVX, a Motorola device we’ve been tracking for several weeks. This machine also goes by codename Motorola XT1032 / XT1033, which, if you have a peek at the Brazilian Agency of Telecommunications, of all places, you’ll find connection to both the DVX and the Moto G. Thanks to a quick find by the folks at PenguinsF, we see the approval of such devices suggesting the following:

This Moto G machine will work with lower-end specifications and a price not unlike the least expensive Nexus smartphones from Google. This “DVX” appeared in the FCC earlier this year while several images of a slightly different back panel for the device have shown up several times over the past few weeks. 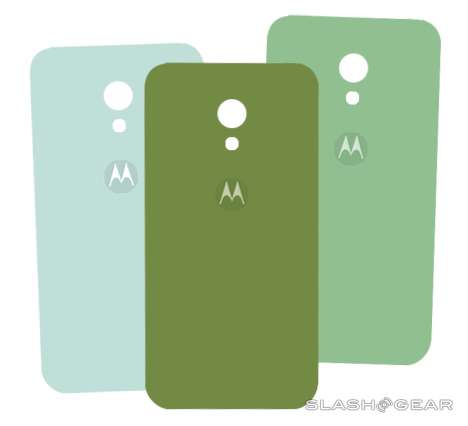 Meanwhile there’s also word that Motorola will push out a flagship iteration of what’s presented in the Moto X in the first quarter of 2014. This release would come in the form of a device not all that unlike the DROID Ultra (reviewed by SlashGear), though it’s suggested that this iteration could move forward with a higher-powered Qualcomm processor integrated in with the Motorola X8 compute system.

On the other hand, its known that the Qualcomm Snapdragon 800 SoC does have built-in (albeit unused in any phone up to this point) abilities to work with always-on voice activation. Whether Motorola would choose to use this system or continue rolling with the technology they’ve got now is yet unknown.

The first sighting of the Moto G trademark – as spotted by Phandroid – did not have any connection to any previously known code-names for devices. It did have connection, on the other hand, to a tip sent out to Droid Life that a “Moto G” would be coming to Verizon sooner than later. 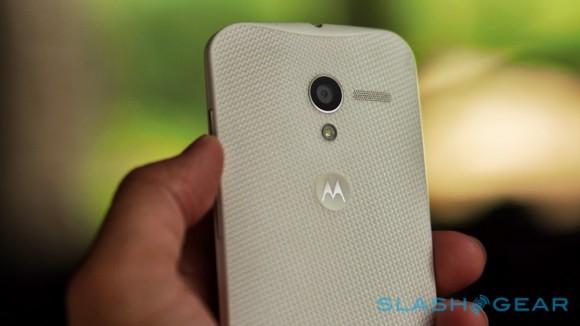 A third suggestion has to do with the lowering of prices on the entire 2013 line of Motorola DROID devices. Each of these machines work with the same abilities as the Moto X, voice activation and all, making it quite likely that any adjustment in price could be a precursor for a similar move for the multi-carrier smartphone.

If the Moto X is given a price-cut here in 2013, it’d make room for a several-tiered system in which the Moto G is the surprisingly-inexpensive tier, the Moto X is the mid-tier, and the top-tier is the yet-unnamed headliner Motorola smartphone. Sound reasonable to you?