Electric car startup Lucid Motors is claiming the range crown for its Lucid Air, boasting third-party validation for the upcoming Tesla rival. Ahead of production kicking off, the Air will be capable of 517 miles of driving on a single charge, Lucid says, making it “the longest range electric vehicle to date.”

It’s certainly a considerable increase over what the rest of the EV market is doing right now. Indeed, in some cases it’s more than double what competitive automakers are promising from their own electric cars and SUVs. Porsche’s Taycan, for example, is rated for at most 203 miles of EPA range, though the automaker contests the validity of the figures.

Lucid’s key rival, of course, is the Tesla Model S. Elon Musk’s sedan may be getting on in age at this point, for a car at least, but it still offers up to 402 miles of EPA range on a charge. That kept it in the upper echelons of the EV segment, but the Air has blasted past it with more than 100 miles extra.

It’s worth noting that the EPA’s testing isn’t necessarily a guarantee of how much driving you’ll actually be able to do. In the name of standardization it settles on a handful of different cycles, designed to reflect how a car might perform in highway cruising, for example, or in urban environments where stop-start traffic and lower speeds are more common. The result is a figure that, in theory at least, makes vehicle to vehicle comparisons possible, even if they’re not what every driver can expect on public roads. 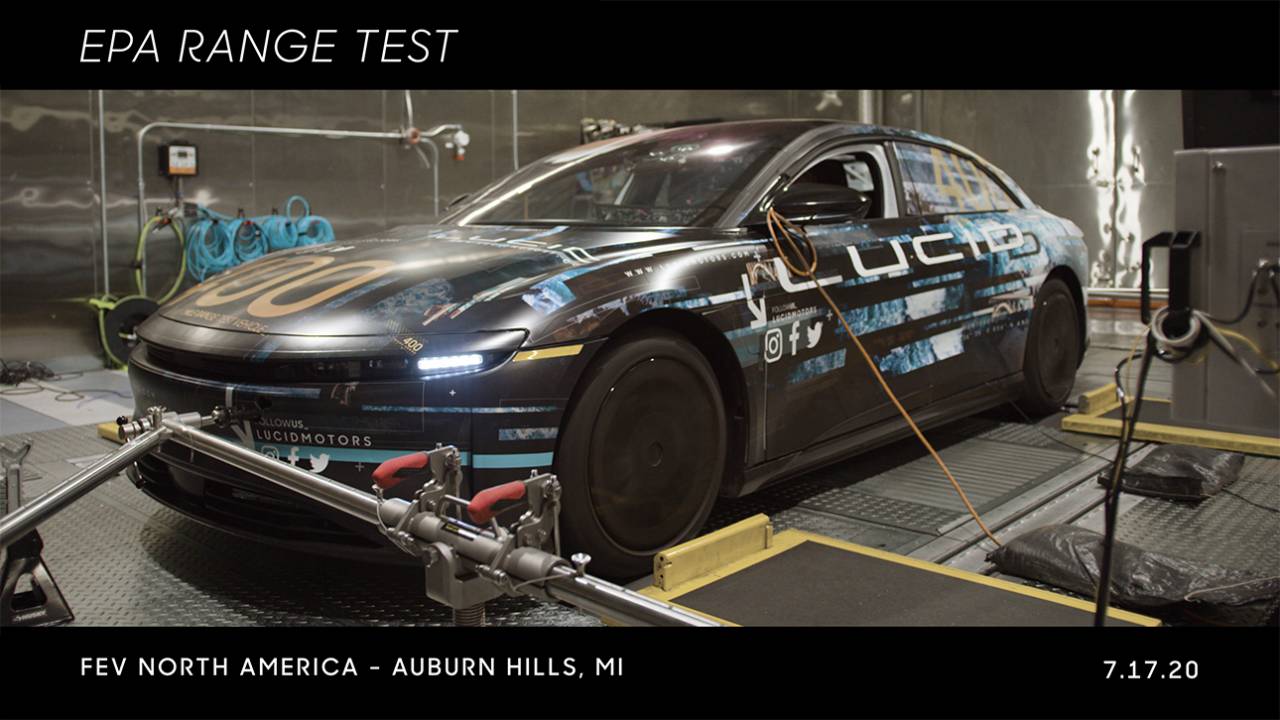 Lucid sent its prototype to FEV North America, which runs independent tests on vehicles according to EPA cycle guidelines. It came back with figures that far exceeded the initial 400 mile range target that Lucid first discussed when it announced the Air back in 2016.

It’s not just a big battery, of course. The automaker credits its 900 volt architecture, along with in-house designs for smaller electric motors and power electronics, for the efficiencies. Then there are factors like the integrated transmission, the chassis and thermal systems, and the aerodynamics of the car. The battery technology is shared with Formula E racing, courtesy of Lucid’s Atieva tech division.

There’s more to EV ownership than pure range, mind, and it’s likely that Lucid will offer different variants of the Air with levels of driving range to suit different needs and price points. We’ll likely hear more about that come September 9, when the production version of the Air is officially unveiled. Charging, too, is equally important: though Lucid won’t have a Supercharger-style network of its own to offer Air owners, it inked a deal with Electrify America in 2018 to get access to its growing array of DC fast chargers in the US.

Where this leaves the rest of the luxury EV crowd remains to be seen. Mercedes-Benz had been hoping to oust the Model S from the top spot with the upcoming EQS, which it says is targeting around 435 miles of range courtesy of new CATL battery technology. That could well beat the Lucid Air to market, however.