As we inch nearer to Google Stadia’s full launch, it’s becoming clear what this possible new age in computing means. Before now, cloud computing was mostly relegated to tasks that could be sent, computed remotely, then returned without gouging your bandwidth’s eyes out. Now, when there’s graphics involved, things are a little different.

It’s relatively simple to figure out how much data Google Stadia’s game-playing cloud computing service will require when it goes live. Stadia “supports a range of resolutions and internet speeds”, so technically you COULD get away with gaming at the lowest possible settings and not worry too much about your data allotment per-month. But let’s do some math. 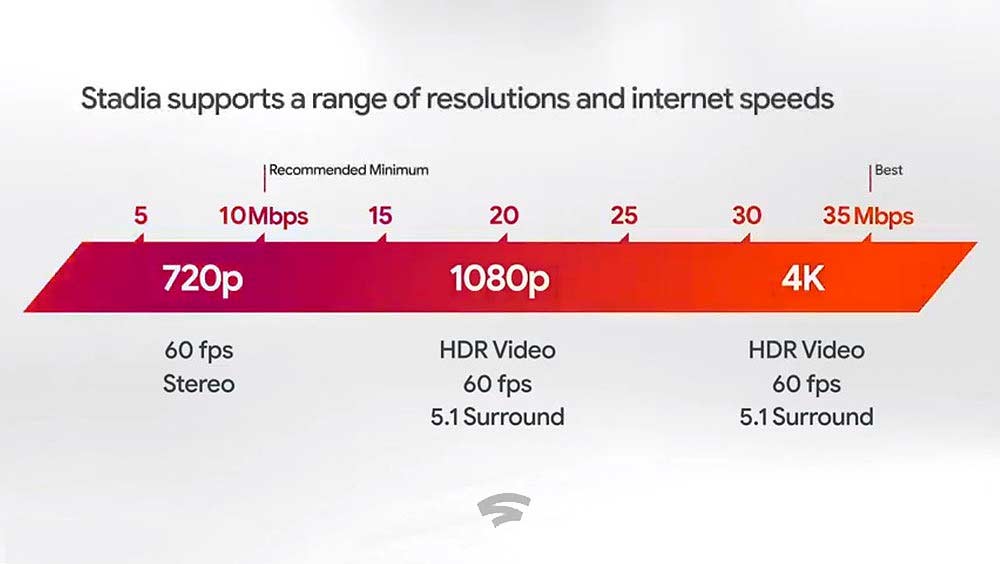 Above you’ll see the standard Stadia range of resolutions and internet speeds it expects you’ll be working with. On the very smallest side, we’ve got an apparent 720p resolution and 60fps (frames per second) refresh rate. That least-possible scenario is 5Mbps, which turns into 2.25 GB per hour.

You can easily see how this might add up, especially if you consider your already-sizable data use with a service like Netflix. The following amounts of data are used per-hour with standard settings on Netflix.

I have Netflix set to “auto” all the time, which given my fairly standard home internet speed means I’m getting the “High” setting equivalent most of the time. Let’s assume my household uses Netflix approximately 2-hours a day every day of the month. I’ll be conservative and assume we’re using around 2.5 GB per hour, so that’s around 150 GB bandwidth per month.

Butting up against the cap

You might already have “unlimited data” with your home internet plan. If you do, you might also have a point at which your internet speed is throttled. That’s entirely legal, of course – we have no Net Neutrality laws here in modern America*, so these internet providers we use can throttle whatever they want, in the most basic of terms. *Unless you live in California.

Remember that individual services are throttled, too, and thanks to the “Restoring Internet Freedom Order”, internet providers are largely free to do what they wish with your internet access.

Assuming you have a 1TB data cap, you might be hard pressed to stay under the line, provided you make use of your Stadia account and utilize a service like Netflix and use your internet for basically anything else – there’s a lot of bandwidth out there, and it’s pretty easy to use rather quickly. Cross your fingers the advent of 5G comes with new assurances that “unlimited data” isn’t going to be a lost concept.