SpaceX faces a “genuine risk of bankruptcy” if Starship can’t fly once every two weeks in 2022, Elon Musk has warned employees, blaming rocket engine production challenges and management crisis for the surprise ultimatum. Starship is set not only to take NASA’s Artemis mission to the Moon later this decade and, beyond that, missions to Mars, in addition to being a key part of SpaceX’s own products like the Starlink satellite internet service.

It’s also considerably larger than anything SpaceX has launched to-date. Standing roughly 400 feet high and 30 feet in diameter, it’s bigger than NASA’s Saturn V and rated to eventually carry more than 220,000 pounds of cargo into space.

As you might expect, then, that sort of spacecraft requires some serious propulsion. For that SpaceX is using its Raptor engines, powered by a fuel known as “methalox” – a blend of cryogenic liquid methane and liquid oxygen – for in excess of twice the thrust of the Merlin 1D engines that SpaceX currently uses for Falcon 9 and Falcon Heavy. One Starship could require as many as 39 Raptor engines for each orbital launch. 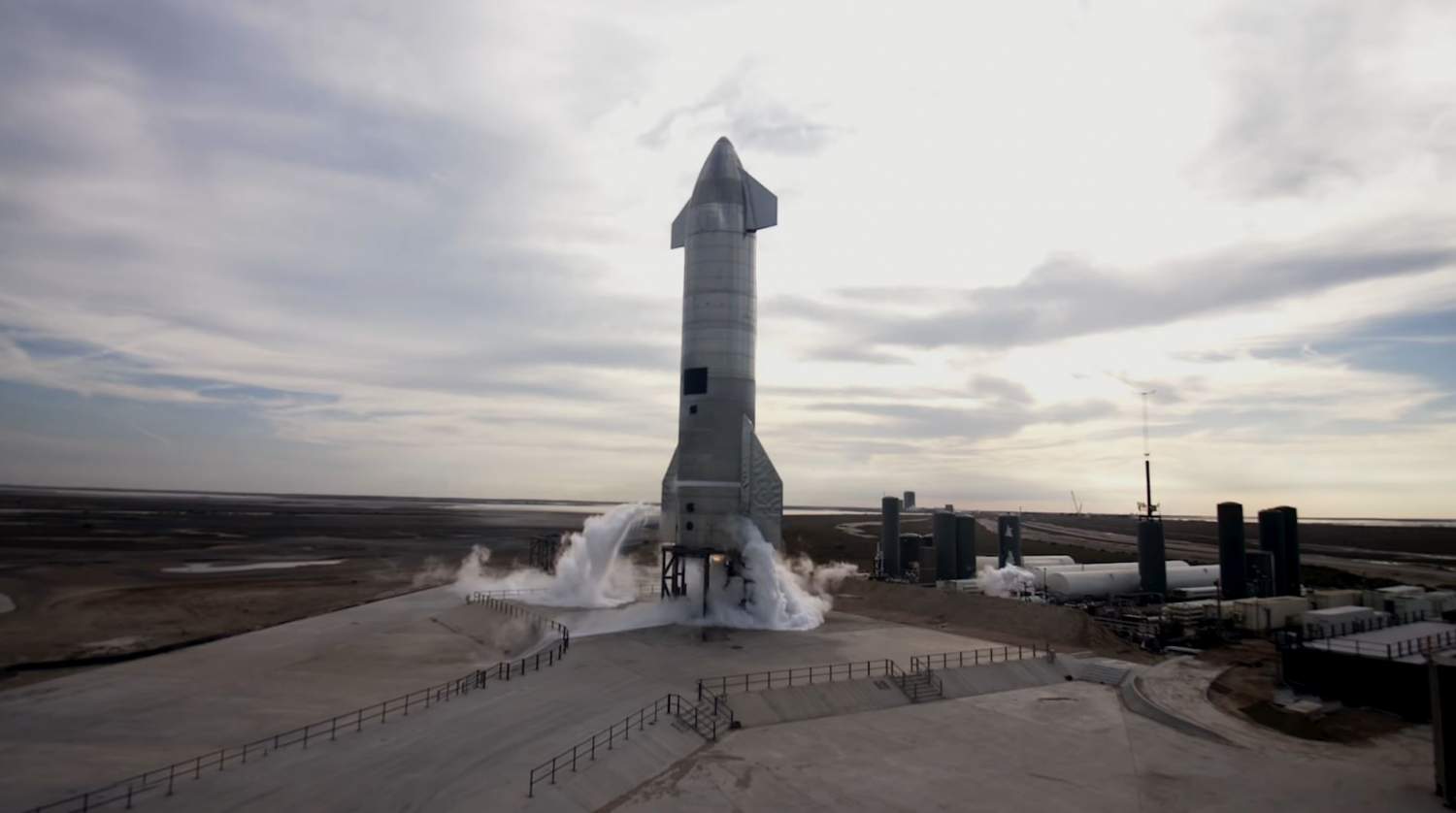 Currently, Starship has undertaken far more constrained test flights than that, but the goal is for a full, orbital launch soon. Actually building sufficient Raptor units for that is part of Musk’s apparent concern.

In an email sent to SpaceX employees on Friday last week, the day after the US Thanksgiving holiday, Musk set out his issues in no uncertain terms. “Unfortunately, the Raptor production crisis is much worse than it had seemed a few weeks ago,” the email – seen by Space Explored and CNBC – reads. “As we have dug into the issues following the exiting of prior senior management, they have unfortunately turned out to be far more severe than was reported. There is no way to sugarcoat this.”

While Musk does not refer to the “prior senior management” by name, it’s believed to be a reference to Will Heltsley among others. Formerly senior vice president of propulsion at SpaceX, Heltsley left the company recently, CNBC reported, as did Lee Rosen, vice president of mission and launch operations. Rick Lim, who had been senior director of mission and launch operations, also left.

Musk has seldom shied away from warning his team at Tesla that disaster is a real possibility, and his approach is the same with SpaceX. “We face genuine risk of bankruptcy if we cannot achieve a Starship flight rate of at least once every two weeks next year,” he added, claiming that rather than taking the weekend off, he would be spending it on the Raptor line instead. 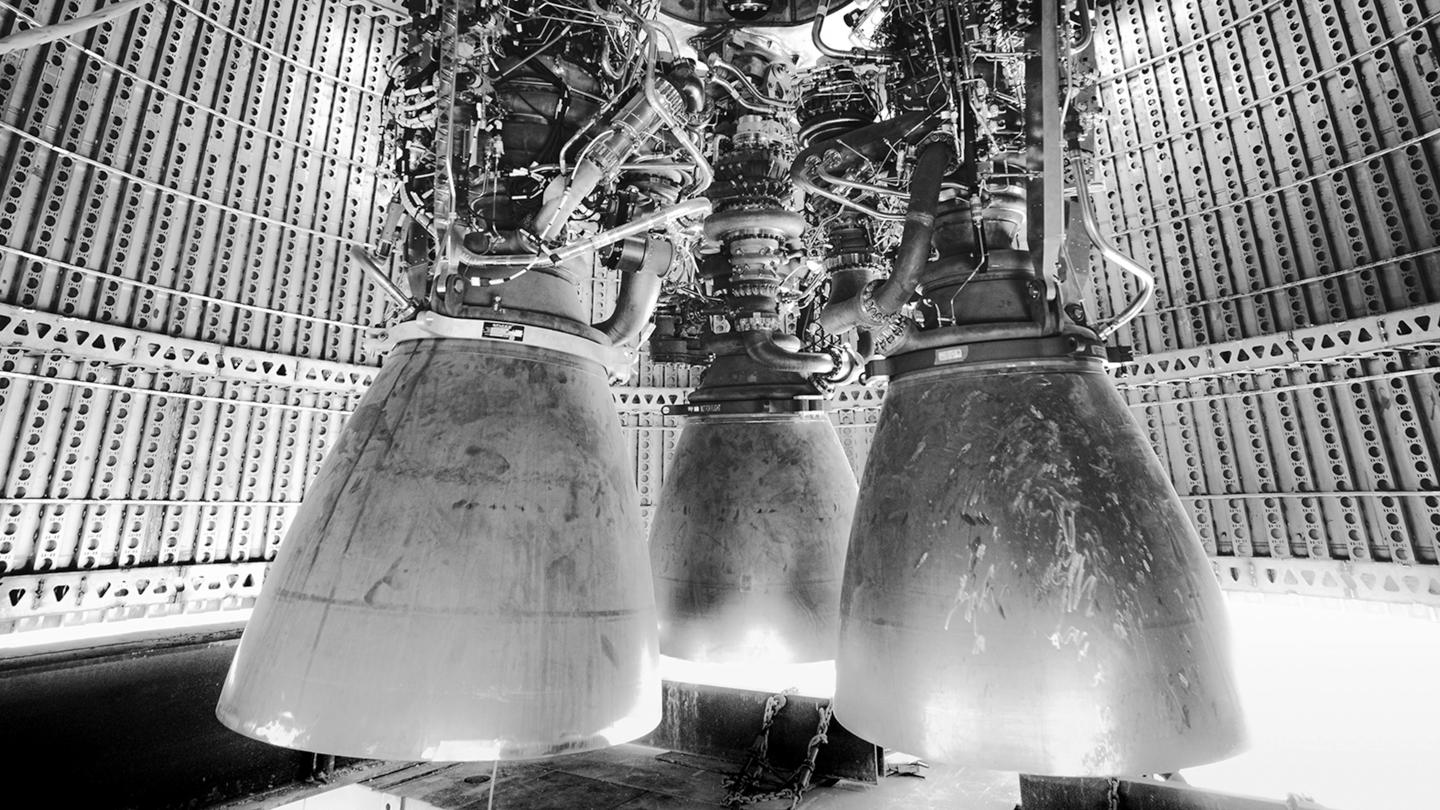 “Unless you have critical family matters or cannot physically return to Hawthorne, we will need all hands on deck to recover from what is, quite frankly, a disaster,” Musk insisted.

Starship is a key part of SpaceX’s roadmap, being the launch centerpiece for a number of different projects. On the one hand, it’s a central element of the company’s big pitch to NASA, helping it win the Artemis landing contract which will see astronauts return to the Moon. Beyond that, SpaceX has ambitions to win NASA Mars contracts with iterations of the same hardware.

For SpaceX’s own projects, however, Starship is also vital. Starlink, the company’s satellite internet service, currently uses Falcon 9 for deployment, but is limited to around 60 satellites on each launch. Starship could not only increase that number exponentially, vastly accelerating deployment and thus service area coverage on the ground, but is also instrumental in the switch to Starlink Satellite V2.

That second-generation design is, itself, key to Starlink’s financial success. Musk has been upfront in the past that the initial hardware for the internet service fell short of being profitable; in fact, SpaceX lost money on each ground terminal it sold. A new design is already in production, and SpaceX expects to build several million units each year, but for that to be feasible the company needs the Starlink Satellite V2 to be in place.

While blunt, Musk also has a tendency toward hyperbole. Still, with Starship so central to so many aspects of SpaceX’s business, even if he’s exaggerating the peril of the Raptor project there’s undoubtedly some degree of truth to it all. Building momentum ahead of the new year and an increasing focus on Starship’s feasibility certainly makes sense, then, and we’ve seen Musk’s “the sky is falling” approach pay dividends when it comes to coaxing a final surge of productivity out of Tesla employees to close out tight quarters.

Update: Responding the leaked email on Twitter, Musk confirmed that – in certain circumstances – bankruptcy is indeed a possibility. “If a severe global recession were to dry up capital availability / liquidity while SpaceX was losing billions on Starlink & Starship, then bankruptcy, while still unlikely, is not impossible” Musk tweeted. “The magnitude of the Starship program is not widely appreciated,” the SpaceX CEO added. “It is designed to extend life to Mars (and the moon), which requires ~1000 times more payload to orbit than all current Earth rockets combined.” 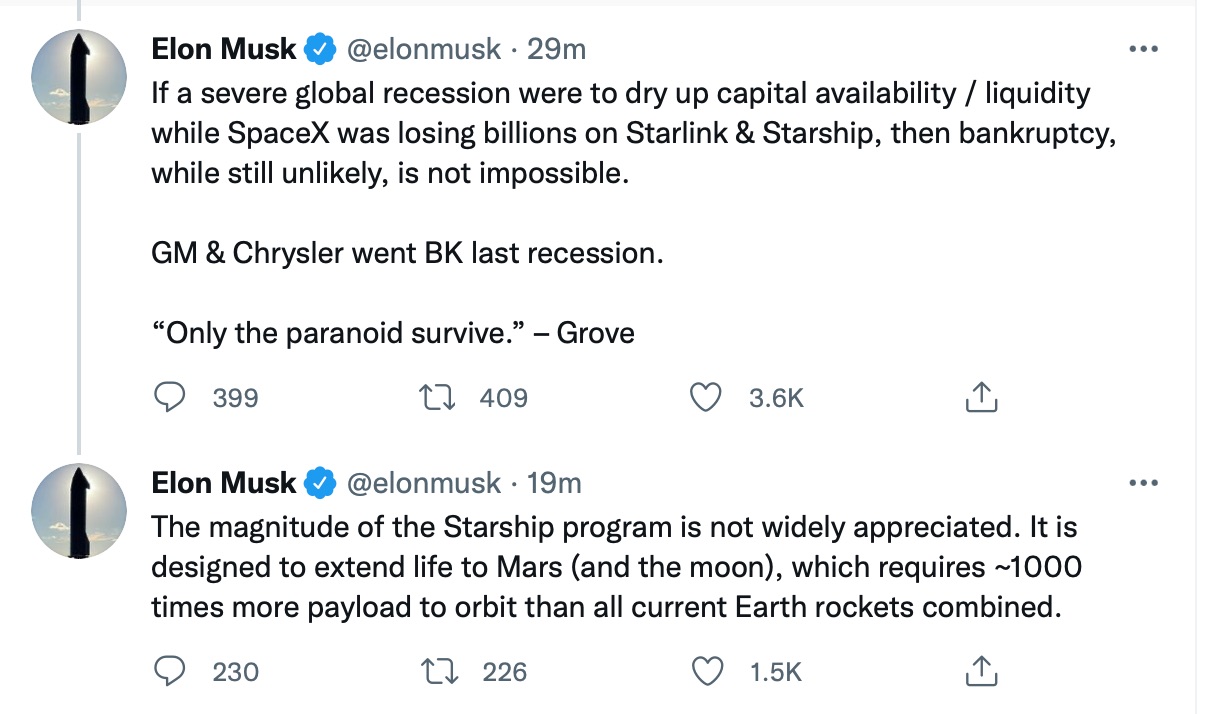