Android Auto has been around in the US for a long time now so it is easy to forget that the automotive OS isn’t available all around the world just yet. Google has announced that Android Auto is now available in 18 more countries around the world. That means that drivers in these countries can get control over compatible apps on their phone from the car infotainment system.

The 18 new countries that now support Android Auto include Argentina, Austria, Bolivia, Brazil, Chile, Colombia, Costa Rica, the Dominican Republic, Ecuador, Guatemala, India, Panama, Paraguay, Peru, Puerto Rico, Russia, Switzerland, Uruguay, and Venezuela. The addition of these 18 new locations marks the largest international rollout of Android Auto since it launched. It’s worth noting that just because Android Auto is available in these countries doesn’t mean all cars will support it. 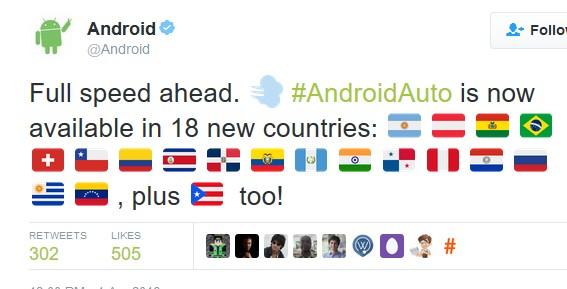