Windows 8 is here, and it’s all eyes on Microsoft’s tablet strategy as the industry gages whether it’s game-on or game-over against Apple’s iPad might. You’d be forgiven for your skepticism, mind: Microsoft’s previous idea of finger-friendliness was to ratchet up the font size and hope for the best. Yet with this latest demonstration, Windows 8 has shown itself to be not just shaping up as a solid OS, but as a truly interesting alternative to the current tablet template.

Back in June, shortly after Microsoft revealed its first real Windows 8 tablet demo showreel, I wrote that to dismiss the platform as a potential iPad alternative was premature. Still, much of the general consensus fell short of positive. Critics decried what they suggested was a poorly balanced juxtaposition of the Metro UI and the underlying Windows desktop, pointing to Apple’s single-minded approach with iOS that rejects OS X style compatibility in the name of simplicity.

At the time, my argument was that just because the iPad dominated in current tablet market-share, that didn’t mean that there was only room for one approach to touch-centric computing. Just because no existing Windows slates had got the mixture of work and play quite right yet, it didn’t necessarily indicate that such a segment didn’t exist. Unusual hybrids like the Android-powered ASUS Eee Pad Transformer have demonstrated that there are those who would ask both content consumption and content creation from their tablet even, again, if they too are yet to settle upon the ideal balance.

From what we’ve seen with the BUILD device this week, Microsoft has delivered and then some. The Start interface of Metro-style Live Tiles could have been a flimsy facade, a glorified launcher that only went skin deep. Instead, Microsoft has apparently created a finger-friendly environment which, vitally, has sufficient breadth to allow those wanting to simply browse the web, play some games and check their email – all common tablet tasks – to remain within the stylized confines of the new UI.

Where other attempts at Windows reskins were in effect oversized shortcuts, Windows 8 now has a legitimately compelling – and distinctive – tablet front. The multitasking system, which blends Windows Phone’s app-switcher with a split pane dual-view, is something few rivals have attempted; the closest is probably webOS, with its cards view, though Windows 8 allows you to interact with both on-screen apps while preserving the double-vision. Intuitive gestures and a much-needed willingness to offer just a few, important controls rather than overloading the display with every option possible keeps things straightforward.

Meanwhile, behind all that the traditional desktop is available: not so much a backdrop, hidden Wizard of Oz style behind the Metro theme, but another viewpoint to choose between. Those attached to their Windows apps – Office, Photoshop, all the usual suspects that are so readily decried by the new generation of tableteers, but which are nonetheless some of the first that users regularly look for – can switch from them, fully usable, to the new breed of slate apps and back again. Use them with a USB or Bluetooth keyboard and mouse, if you prefer, or take advantage of the selection of on-screen keyboards and much-underrated handwriting recognition with either touch or accurate stylus. 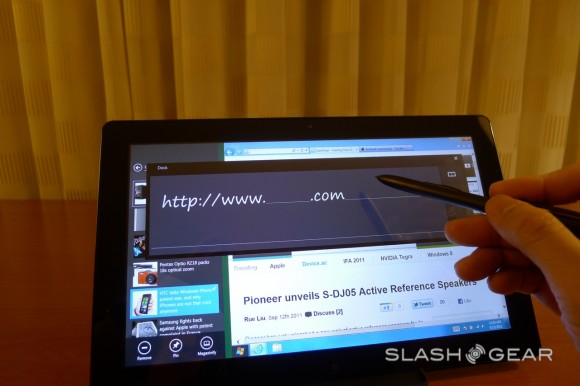 Make no mistake, Microsoft still has a couple of hurdles to deal with. Delivering on the Windows 8 on ARM project will be integral to pushing the new platform through to users: without those frugal chipsets, battery life is unlikely to be as competitive and price will probably lurk around the top end of the market. Beyond that, Microsoft needs to leverage its developer relations to encourage coders to produce best-of-breed titles that make Windows 8 attractive to consumers.

The initial signs look good on that. Microsoft has handed 5,000 Windows 8 developer units out at BUILD today, and its promotional work with Windows Phone shows it at least recognizes the vital important of a solid app basis. Those without the free hardware will at least get access to the Windows 8 Developer Preview, which also goes live today.

I’ve made much of my history with Windows-based tablets, my initial love of the Windows XP based HP tc1100 and the growing frustration with subsequent iterations as Microsoft was left behind by its rivals. It’s still early days yet for Windows 8, but it’s not too great a stretch to suggest that the new OS is shaping up to be the best work the company has done on its mainstream platform in years. Commentators need to lose their obsession with iPad “killers”: Windows 8 demonstrates that there’s more than one way to shape a slate.