Waymo has begun real-world testing of its newest autonomous fleet, with the first Jaguar I-PACE electric self-driving cars hitting the road in Mountain View, California. The Alphabet-owned Google spin-off inked a deal with Jaguar Land Rover back in March 2018, agreeing to put an astonishing 20,000 of the then-new I-PACE EVs into the driverless fleet over the next two years.

It was a step to augment, rather than replace, the existing vehicles in Waymo’s range. The company has been using Chrysler Pacifica Hybrid minivans for its current real-world trials, but the addition of Jaguar EVs would offer not only a different drivetrain but a more luxurious option for the eventual ride-hailing business that Waymo has in mind.

What wasn’t clear at the time the deal was announced, however, was when Waymo would take delivery of the first I-PACE cars, and when trials would begin. Sales of the EV began later in 2018, and met with generally positive reviews. Though its range isn’t the greatest in the luxury electric segment, the I-PACE is typically praised for its enthusiastic driving dynamics and utility.

Now, Waymo has got its collective hands on the car and put it to work driving itself. At least one autonomous I-PACE was spotted in Mountain View, the area around Waymo’s headquarters which is a common stomping-ground for its trials. The company confirmed autonomous testing had begun to TechCrunch; the first I-PACE were actually received in July 2018, though were operated by human drivers. 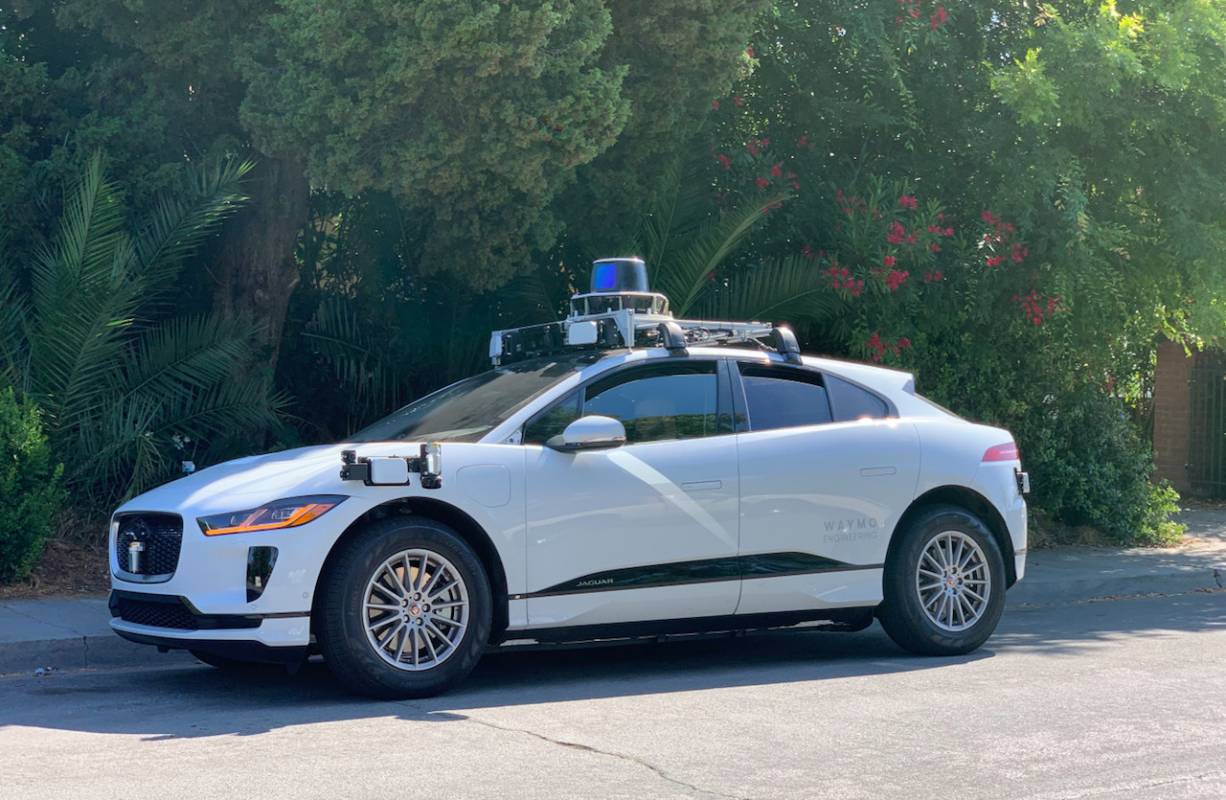 There’s still a human behind the wheel of the modified Jaguar cars, but they’re only there as a backup for safety purposes. The car itself, judging from TechCrunch’s image, has an early version of the Waymo hardware installation. Unlike the prototype shown back at the deal’s announcement, in which the sensors on the wings and roof of the EV were cleanly enclosed and faired-in, this road-going version has a more ad-hoc arrangement.

On the front wings, the rear wings, and the grille there are various cameras, LIDAR range-finders, and other sensors. A more significant array is mounted on a roof-rack, with a LIDAR turret, radar, camera, and other equipment. The car is more discreetly badged than Waymo’s minivans, with only a subtle gray “Waymo Engineering” logo on the rear doors.

That’s all likely to change as Waymo gets to grips with the vehicles, which will have brighter badging and sleeker sensor hardware. If all goes to plan, the company says it hopes to add I-PACE options to the ride-hailing Waymo One service currently in limited operation in Phoenix, AZ sometime in 2020. Meanwhile Jaguar itself is exploring its own self-driving plans, as part of its push to increase electrification, connected, and autonomous technologies.