Yes, the VW Taos Basecamp is a concept for now. But we have a strong feeling it won’t remain a concept for long. Seemingly inspired by the positive response from its Atlas Basecamp concept in 2019, the Volkswagen design team in Oxnard, California, conceived the Taos Basecamp Concept as a more outdoorsy and rugged version of a standard VW Taos crossover.

“Many are venturing into the great outdoors and require vehicles with the innovations to accommodate their active lifestyles,” said Robert Gal, Senior Manager of Performance and Accessories at Volkswagen of America. 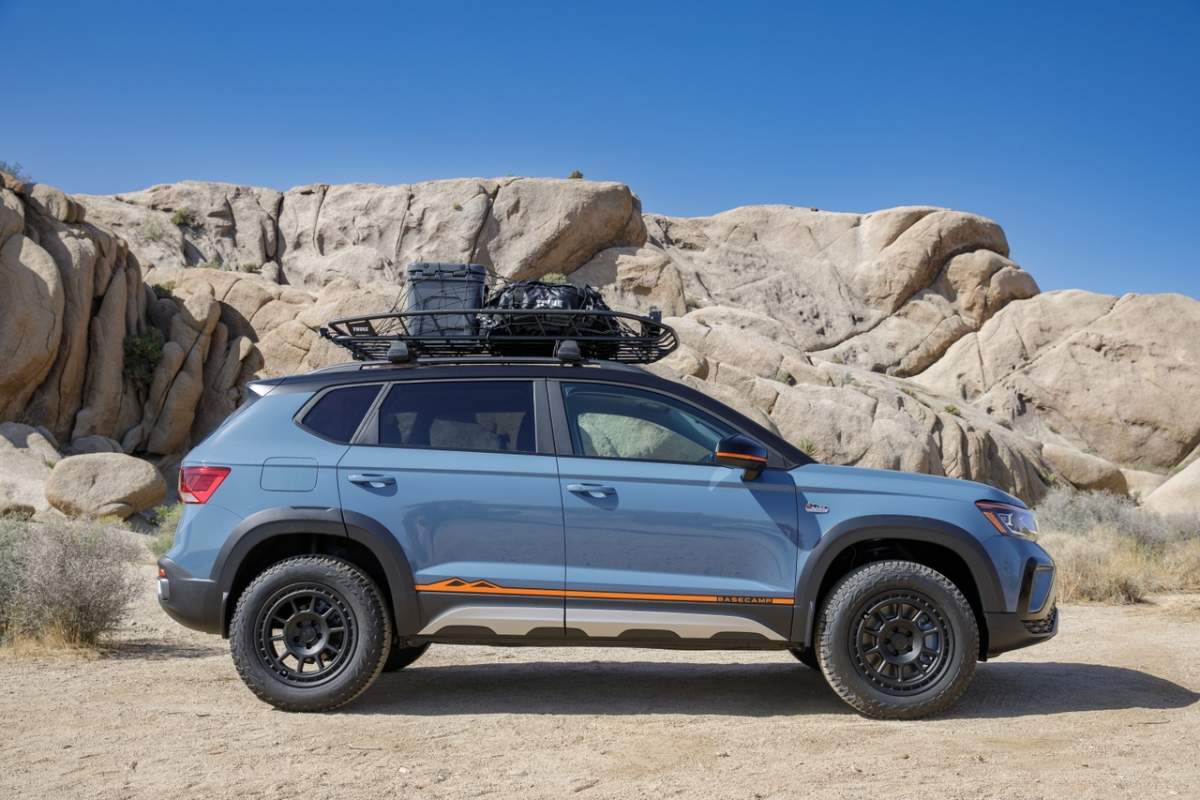 VW’s Atlas Basecamp Concept debuted at the 2019 New York International Auto Show and made its way to the 2019 SEMA show. In less than a year, Volkswagen debuted an exclusive range of Basecamp off-road accessories for Atlas SUV. Are you noticing a pattern here? 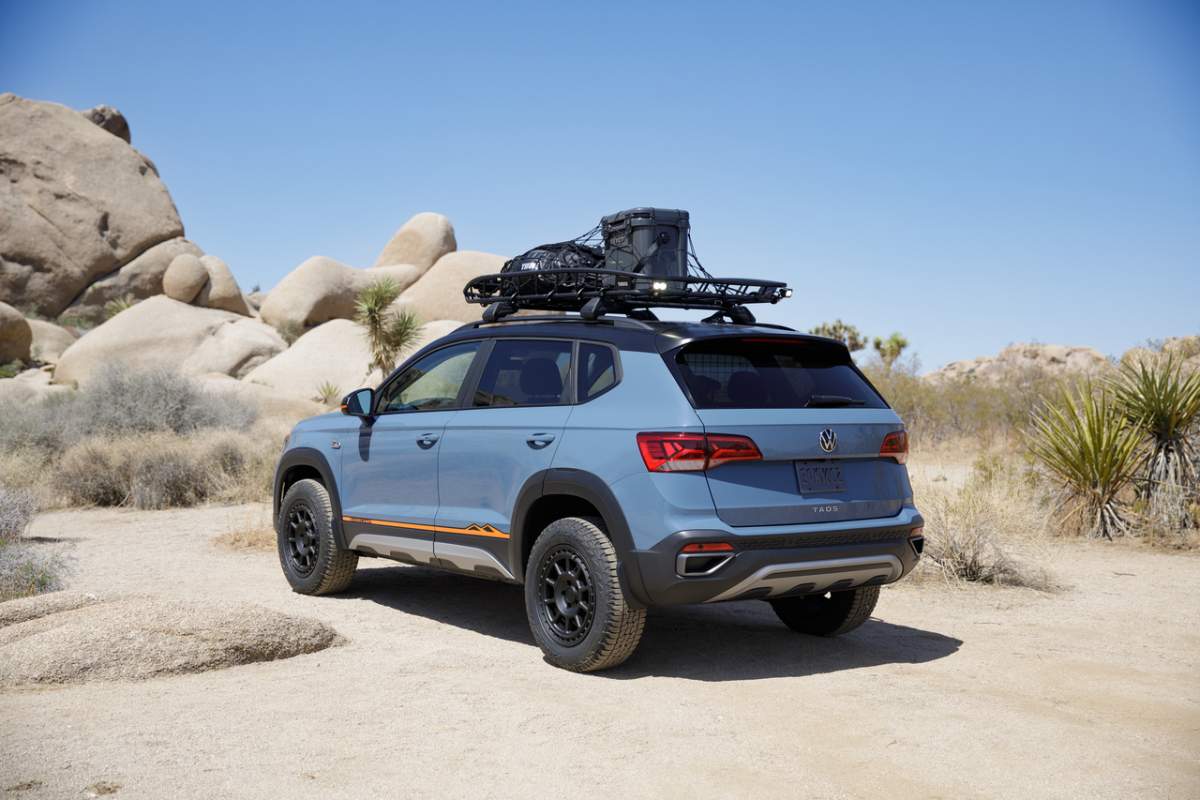 “The Taos is a great compact SUV from the start,” said Reto Brun, Director of the Volkswagen Design Center California. “Following the design strategy we established with Atlas Basecamp Concept, the Taos Basecamp has Waimea blue paint with gloss black trim elements and a matte black hood and roof.” 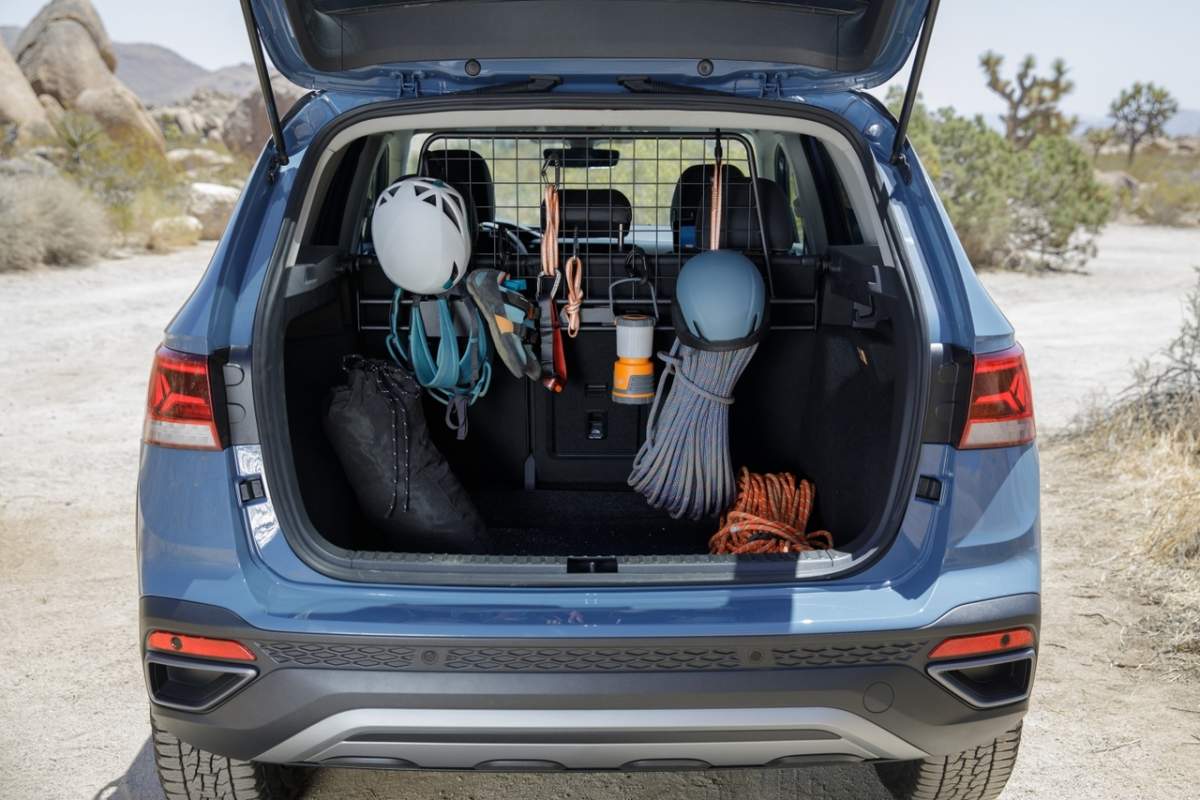 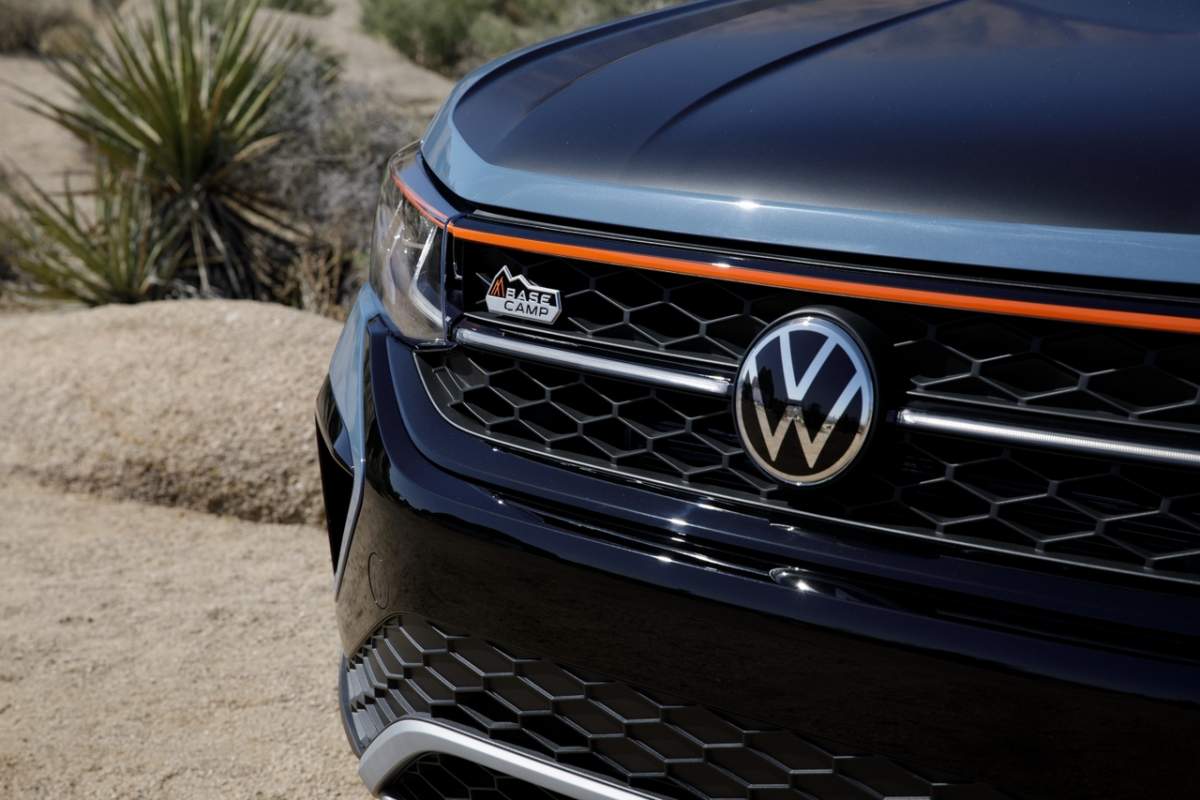 There are no changes under the hood. The 2022 VW Taos remains powered by a turbocharged 1.5-liter four-cylinder direct-injected motor pumping out 158 horsepower and 184 pound-feet of torque. Front-wheel-drive models get an eight-speed automatic, while Taos AWD has a seven-speed dual-clutch gearbox. 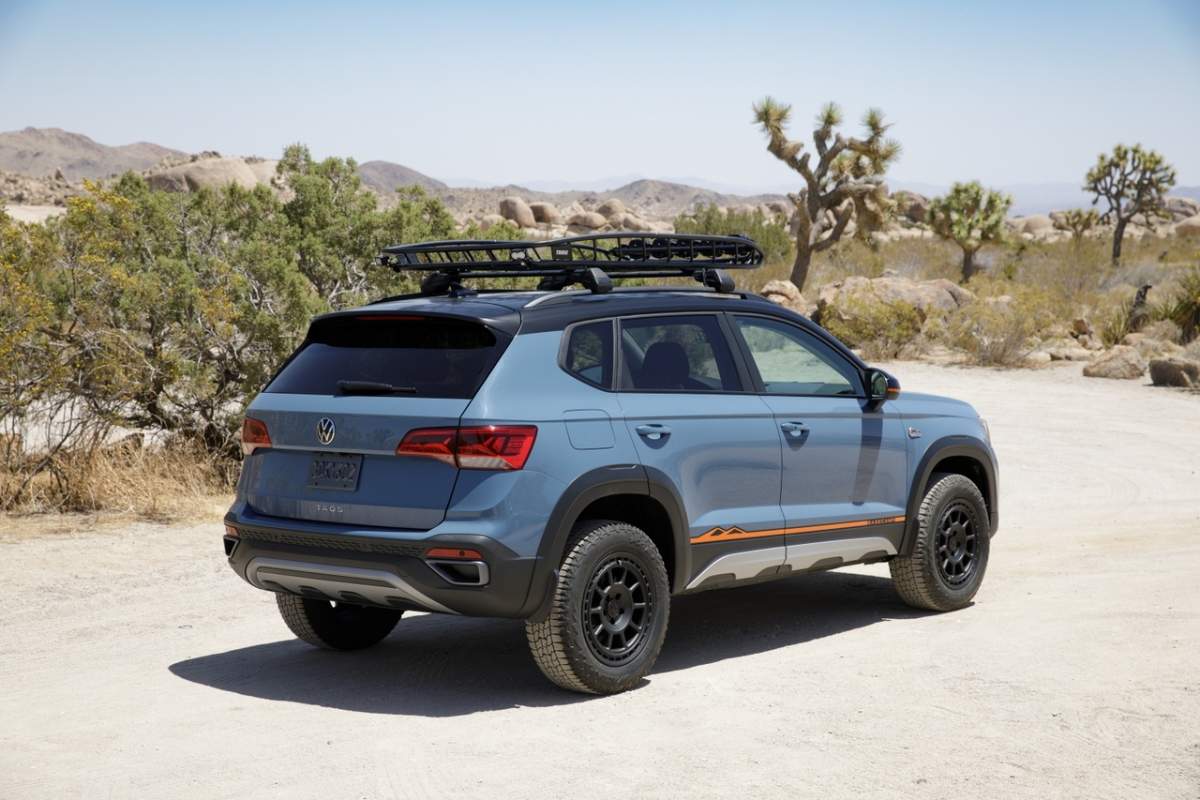 And despite having a turbo engine, the all-new VW Taos is a fuel miser. The FWD Taos achieves an EPA-confirmed 28/36/31 mpg on unleaded fuel, beating similar competitors like the Mazda CX-30 and Audi Q3. Meanwhile, Taos AWD with a 7-speed DCT achieves 25/32/28 mpg. 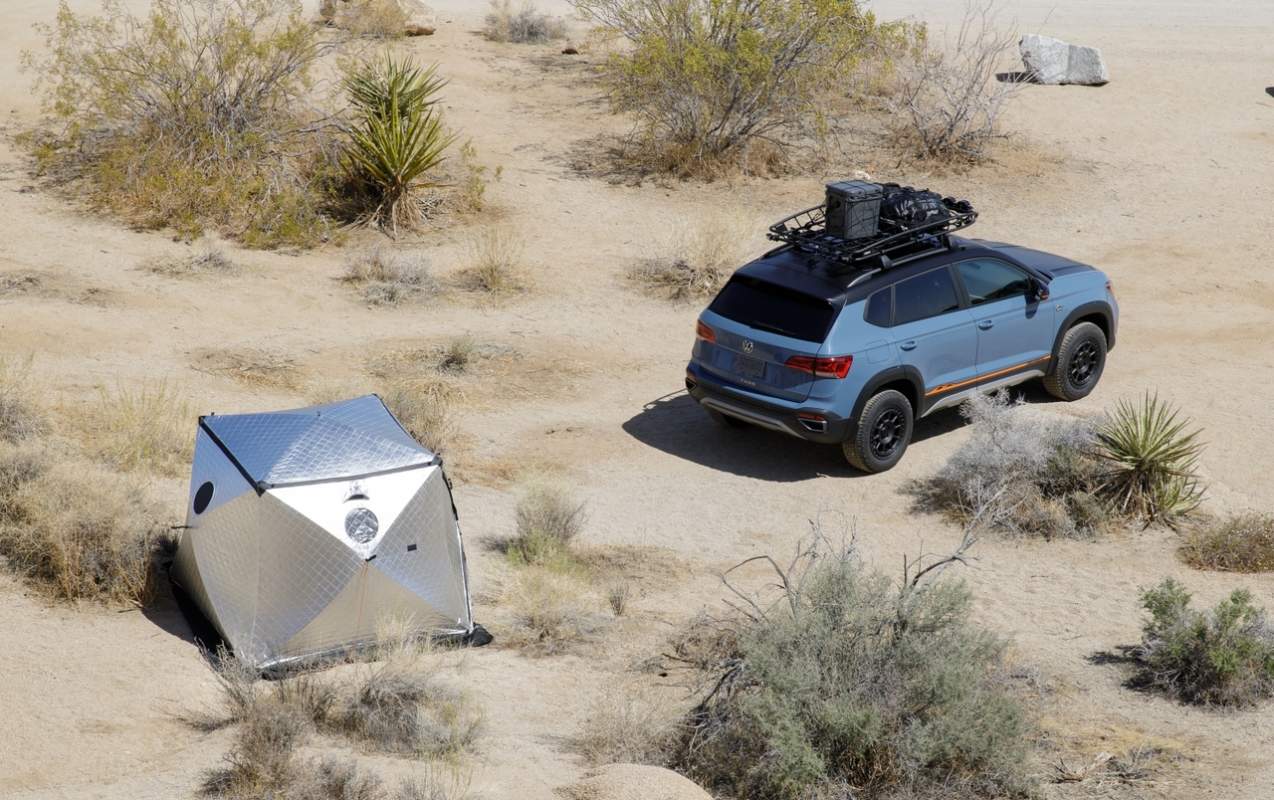 The Taos Basecamp Concept will also debut VW’s new Gentex HomeLink Bluetooth-enabled frameless mirror with an integrated compass. The 2022 Volkswagen Taos arrives at dealerships this June with base prices starting at $22,995 (Taos FWD) and $24,445 (Taos AWD), while the Basecamp accessories will most likely be available by next year or sooner. The Taos Basecamp Concept is currently on display in Helen, Georgia, until May 23.