Audi teased us with the idea of a beastly electric Dakar Rally car last year, and now that Audi RS Q e-tron has been revealed. Set to race in January 2022, the tri-motor hybrid is like nothing else in Audi’s line-up. While it’s built specifically for the unique challenges of the desert, however, that won’t stop us from hoping key elements get cherry-picked for future production models.

Electric drive has clear advantages for off-roading, like precise power control and instantaneous torque. At the same time, though, taking an EV to the desert loads up other challenges to overcome. The Dakar Rally is two weeks long, Audi points out, and its daily stages can be close to 500 miles in length. 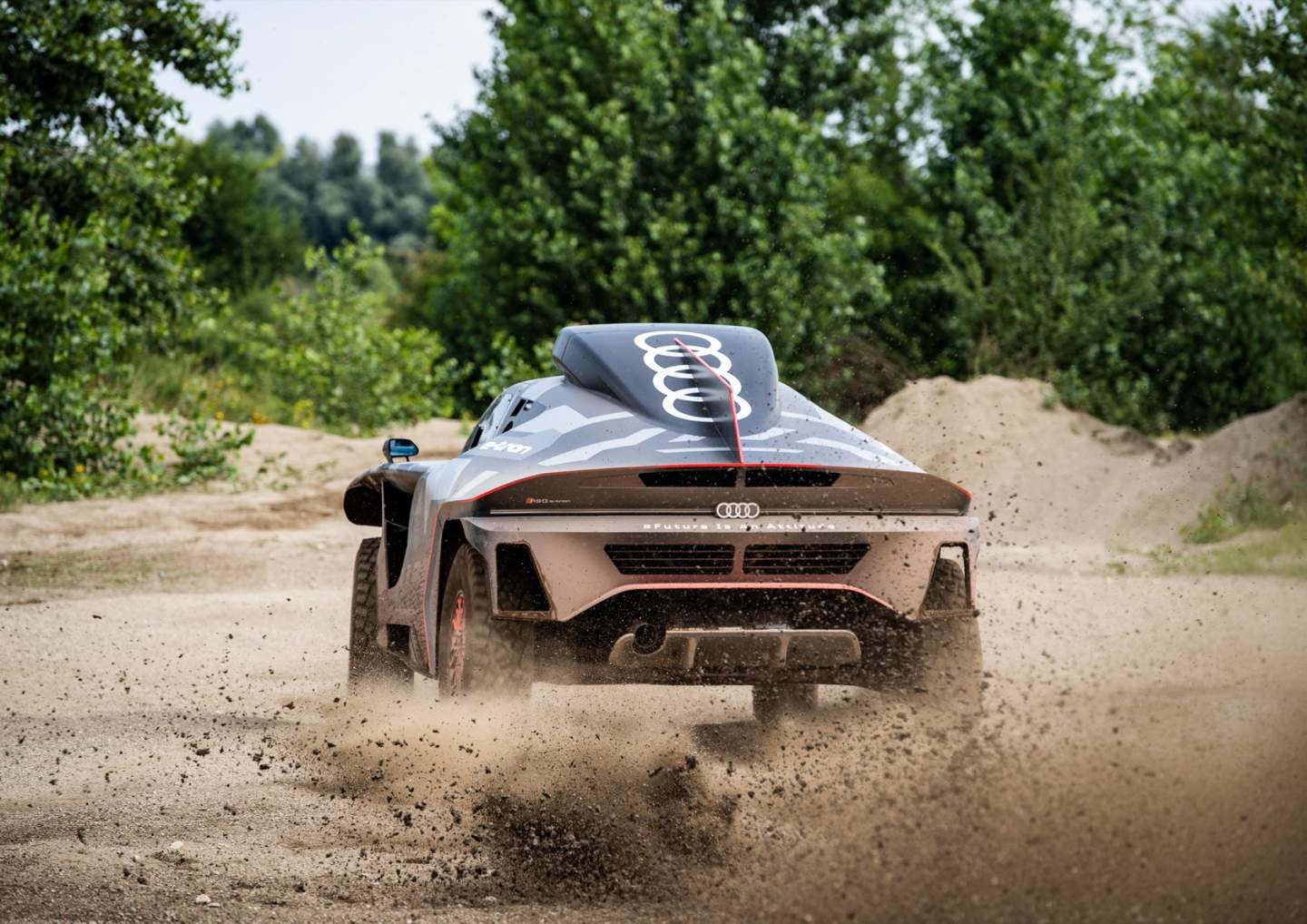 Far from DC fast chargers, then, Audi has opted for a hybrid configuration. The drivetrain of the Audi RS Q e-tron is electric, but its high-voltage battery is charged up from the same TFSI engine as in the automaker’s DTM car. By holding that in its most efficient range – between 4,500 and 6,000 rpm – Audi says it can coax less than 200 grams of fuel consumption per kWh from the turbocharged gas engine. 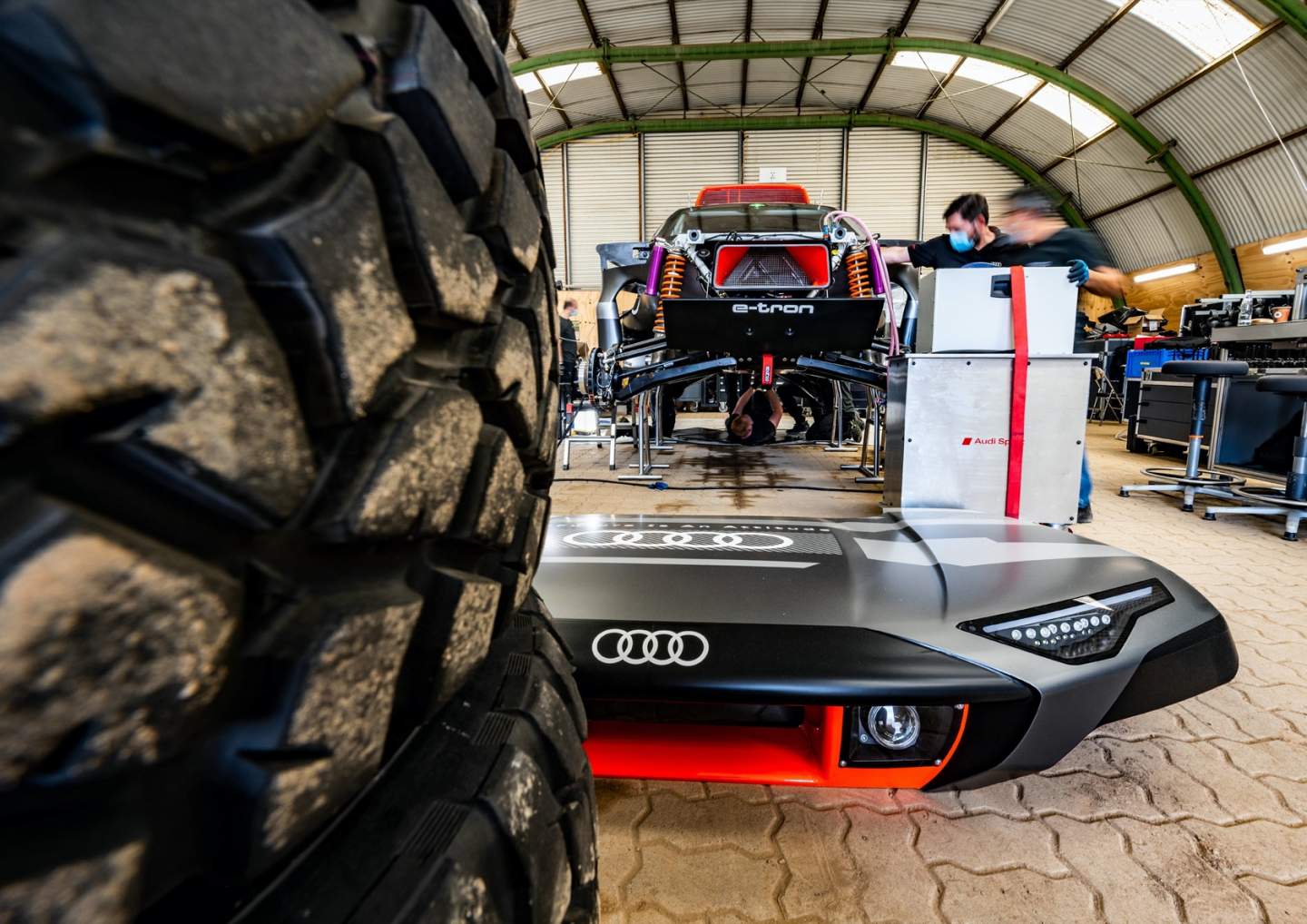 What the Audi RS Q e-tron does with that power is where things get particularly fun. There’s an electric motor-generator unit – borrowed from the Audi Sport e-tron FE07 Formula E car built for the 2021 season, and with some minor massaging for rally purposes – on each axle, while a third is included in the energy converter. It recharges the battery while driving, along with regenerative braking.

The battery itself is a roughly 50 kWh pack, tipping the scales at about 816 pounds. It’s actually the part of the whole project that Audi sounds most proud of, given the scope there for efficiency improvements. 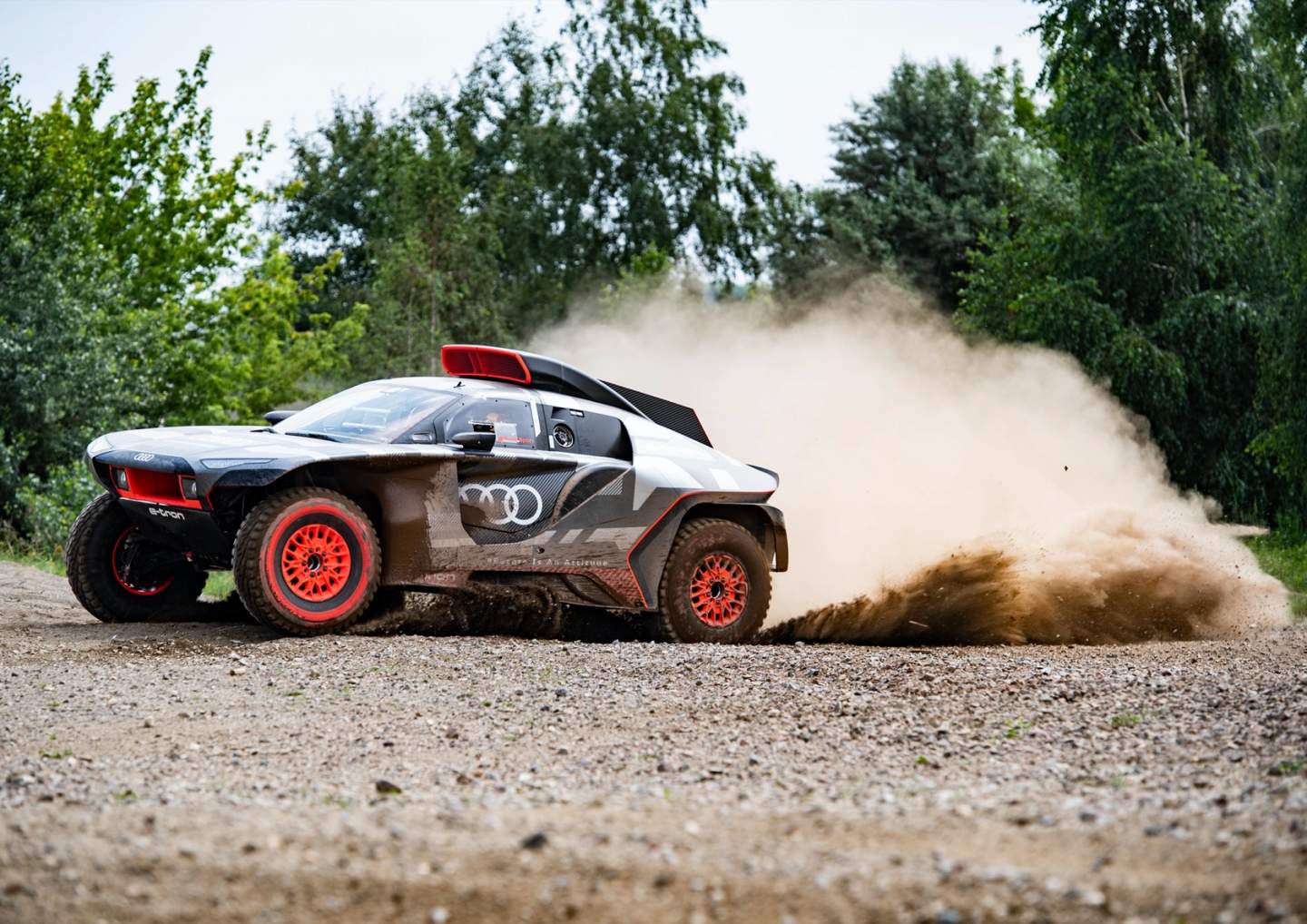 “As engineers, we basically see development potential in every component,” Stefan Dreyer, Head of Development at Audi Sport for motorsport projects, explains. “But in terms of the drivetrain system, we have already achieved a system efficiency of over 97 percent in Formula E. There’s not much more room for improvement. The situation is quite different with the battery and energy management. This is where the greatest development potential lies in electromobility in general.”

There’s no gearbox, only a single forward gear, and no mechanical connection between the front and rear axles. Instead, Audi uses software to balance torque distribution, allowing the Audi RS Q e-tron to push power forward or backward depending on traction needs. In all, there’s 500 kW of power to play with, though just how much Audi will be able to wield during the rally itself will depend on the Dakar Rally organizers and the rules for the 2022 race.

We’ve seen a number of automakers flirting with outlandish electrification ideas over the past couple of years, as they experiment not only with the capabilities of EV drivetrains but ways to sell performance electric to an audience more familiar with high-power gas models. Ford’s Mustang Mach-E 1400, for example, may look much like its road-going sibling, but it packs 1,400 horsepowers from seven electric motors. While it won’t be going into production, Ford has said it aims to take lessons from the prototype for future high-speed EVs.

Audi, too, isn’t skipping the idea of this RS Q e-tron being the starting point for its own production EVs. Just as with its Formula E work, commercializing the EV tech is always a parallel goal. Though that might not mean something quite as outlandish as a futuristic dune buggy, improvements in the high-voltage battery could make a significant difference to more attainable electric models down the line. 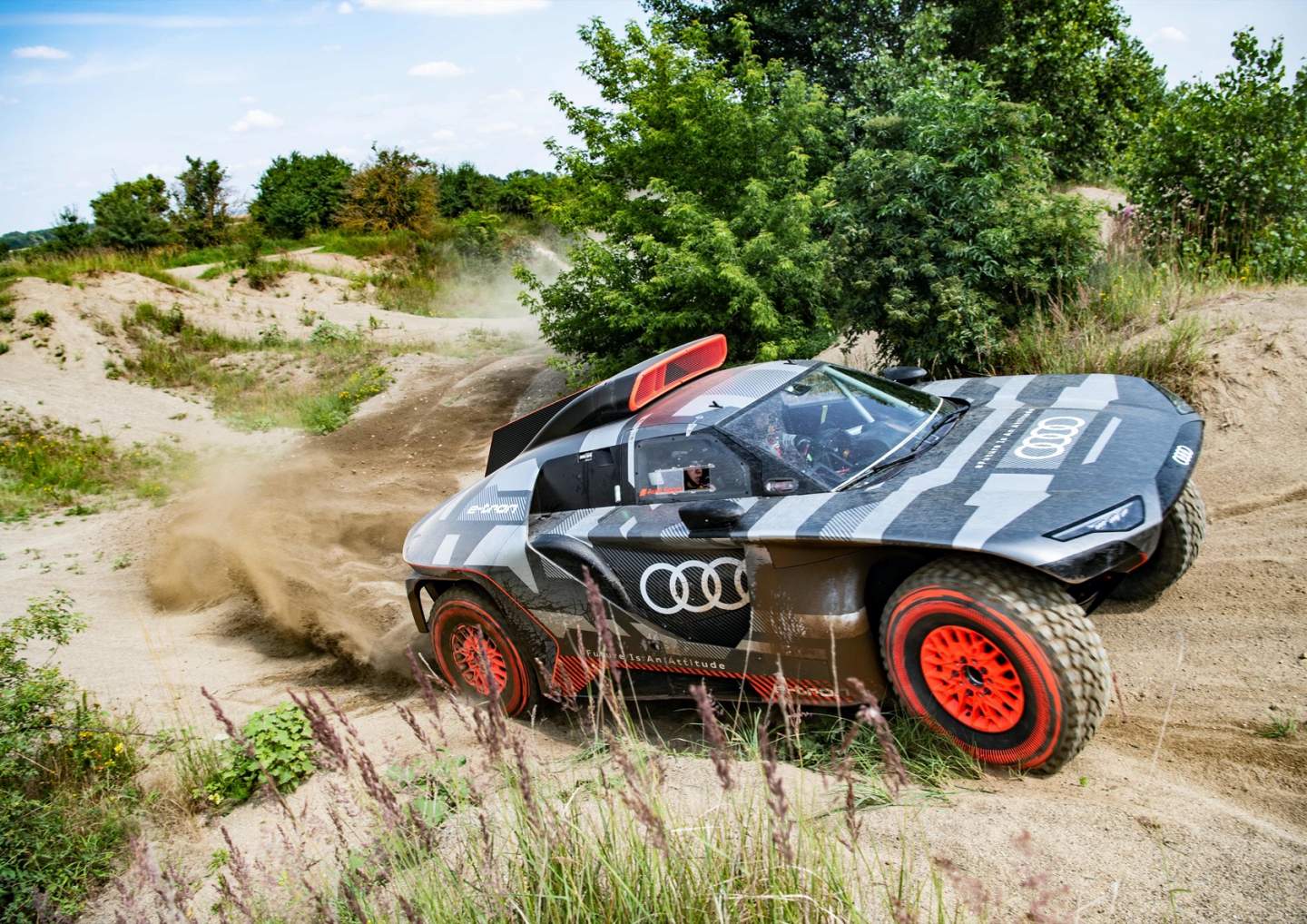 “What we learn from the extremely challenging Dakar project will flow into future production models,” Audi Sport’s Dreyer explains. “As always, we are also working closely with our colleagues from road car development on this project.”

Testing of the Audi RS Q e-tron will continue through the end of the year, before it heads to the Dakar Rally 2022 to put Audi’s electric theories to the test.