The Formula E crucible: How Audi brings e-tron race tech to the road

2019 marks Formula E’s fifth year of staging races in major cities around the world, and early skepticism around whether electric cars could capture race-fans’ imaginations seem finally to have been dispatched. The chassis, brakes, battery and tires are the same for the 11 teams and 22 cars. It’s a team’s intellectual property – the electric motor, inverter, gearbox, and battery/thermal management software – that separates the winners from the losers.

In Formula E, the cars lack the massive downforce generators that Formula 1 cars require, and the design forces the cars to compete at slower speeds. Though the aero does provide some benefits, aesthetics play a far greater role. 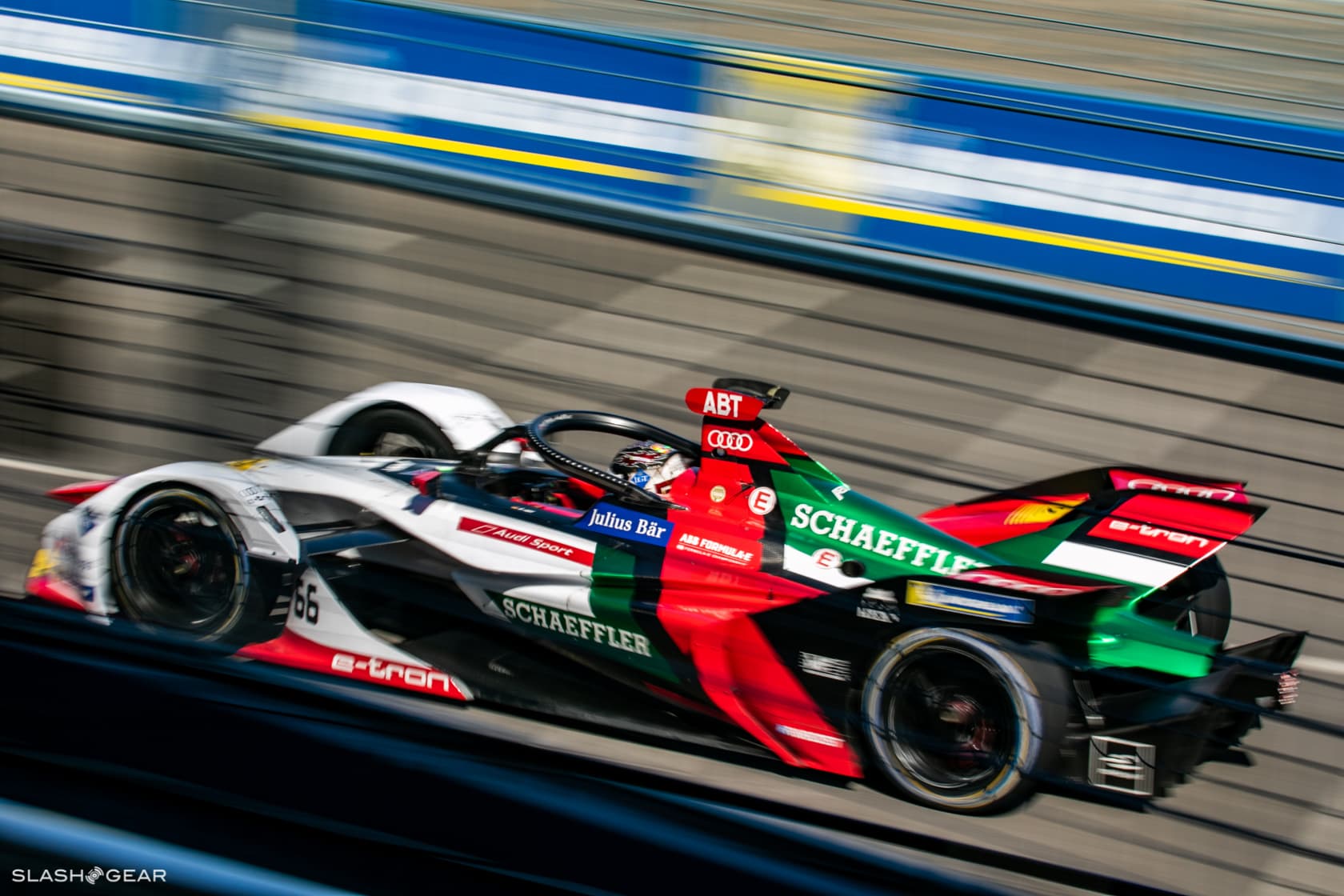 With the 5th season of Formula E coming to an end, Audi is still working toward finding its advantage. Audi Sport ABT Schaeffler was able to finish the series in 2nd place with 203 points, while drivers Lucas Di Grassi and Daniel Abt finished in 3rd and 7th overall at the July 13 race in Brooklyn. Audi’s involvement in the sport started with the 2014 inaugural race and the German automaker says it’s committed to Formula E for the foreseeable future.

I sat down with Allan McNish, a three-time Le Mans winner and team principal of Audi Sport ABT Schaeffler Racing team in Brooklyn, New York. McNish talked about the future of Formula E, Audi’s e-tron FE04, and how to get Americans excited about EVs and the connection to the road cars. 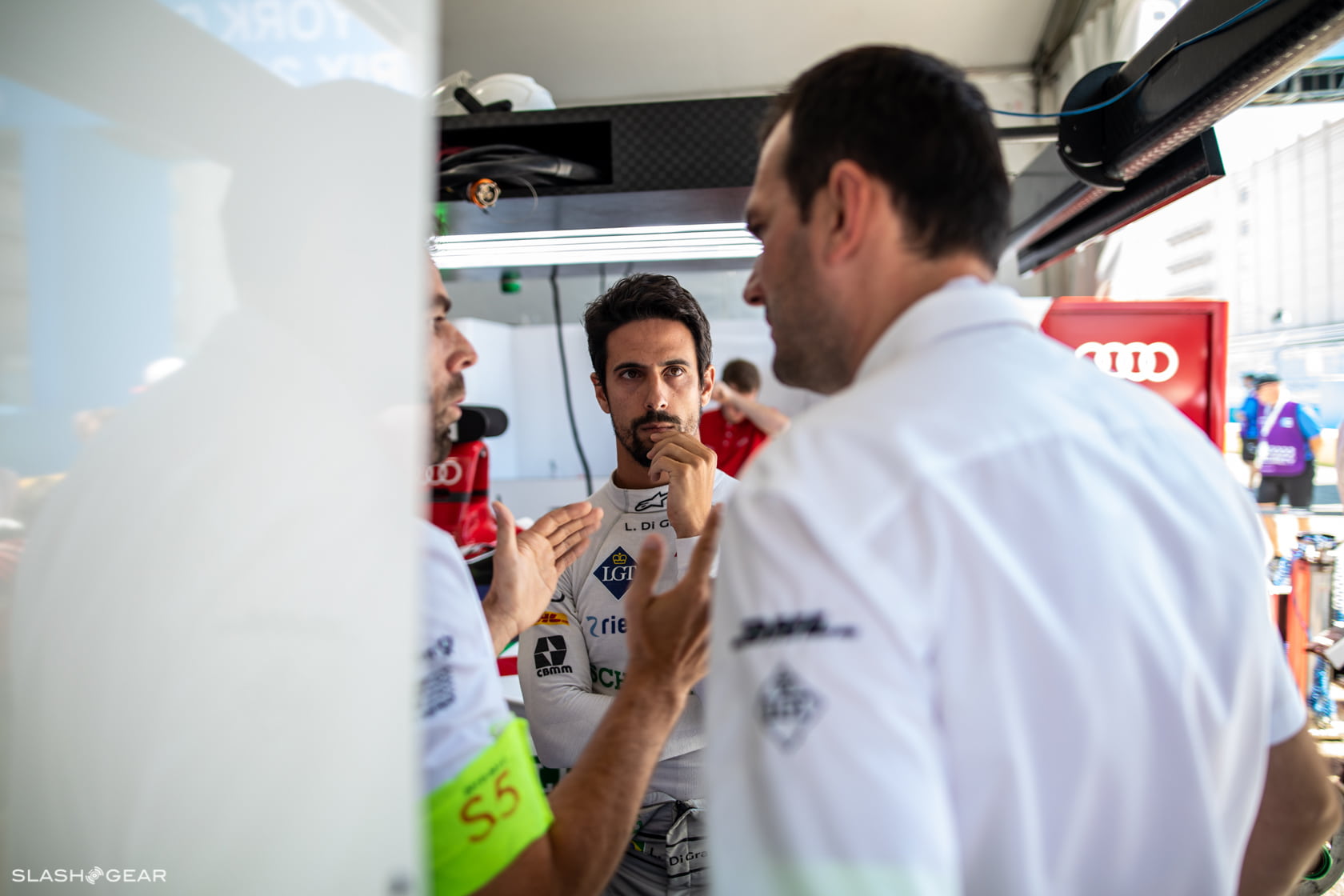 “We’ve got one of the biggest lift-off percentages of the season.” McNish told me. “So in that respect, it’s about 35% lift-off. Which means that we’ve got to think very cleverly how we use our energy in boosting and acceleration.”

“To be able to finish the race, only 65% of the race can be under wide-open-throttle.” McNish explained. “Which is how we use it, [the batteries’ energy] is basically flat out, and you recovery energy in the braking and coasting phases.” To be able to finish the race, the drivers need to lift off the throttle and coast. Exactly where they need to lift has already been calculated in the simulator. 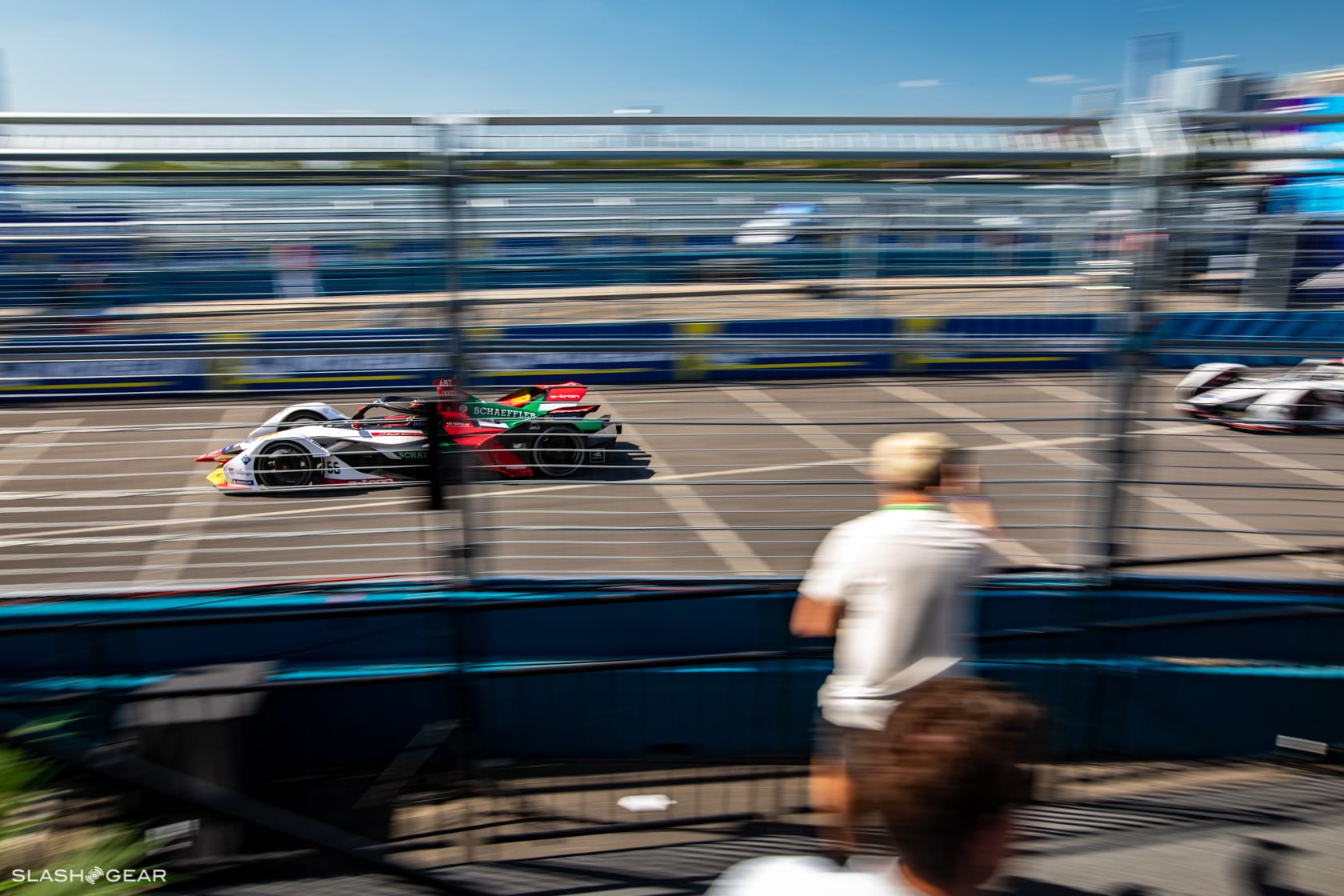 McNish was able to help SlashGear show the similarities between the Audi e-tron FE04 race car operation to that of the Audi e-tron road car. “You’ve got this situation, similar to the Audi e-tron, with the e-tron when you brake you recuperate energy into the battery and when you lift off the throttle, then you also recuperate, and you can also do it manually,” McNish notes.

The FE04 contains a complex system that identifies precisely where the driver needs to lift off the throttle. “We’ve got a system which gives an element of automation to that.” McNish said. However, the driver has to follow it. So [the computer] kind of understands what it needs to do and it’s predicting where it needs to go.” 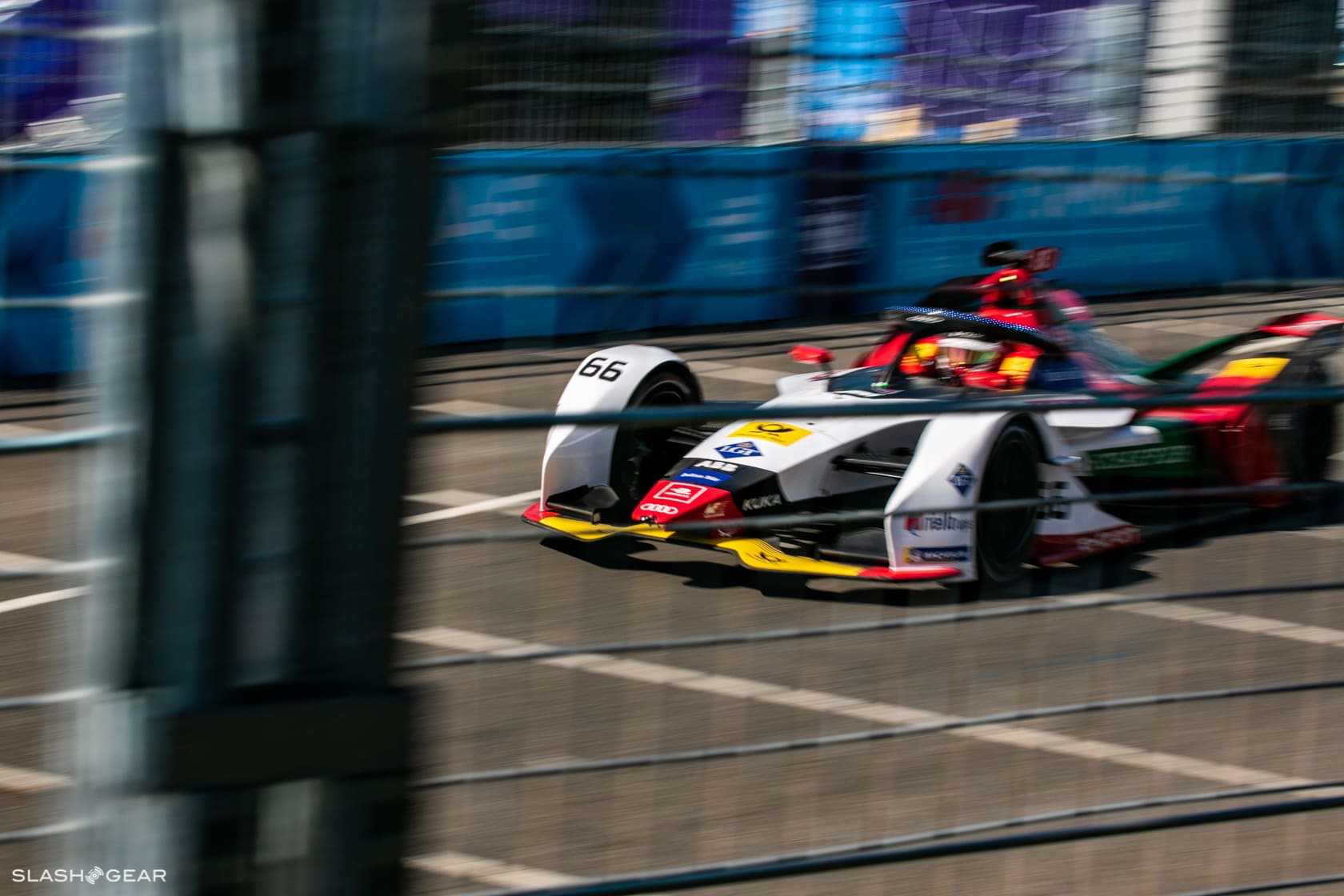 Still, it’s the driver’s responsibility to follow the prompts: the system is not able to intercede when there’s a problem. “Therefore we’ve got this situation where the driver has got to really be careful.” McNish said. “So if he gets into a wheel to wheel fight like a dog fight if you think back to Sebring [American Le Mans and later WEC] that is negative.”


The battle of the electrons

Formula E drivers are not only required to pay attention to their current situation, but they need to be fully aware of their potential position at the finish line at every moment. “Because when you are blocking someone say into the hairpin and you are on the inside, and someone goes into your outside, and you keep the position,” McNish points out. “But by doing that you when you come out, you need more energy to accelerate out of the corner.” 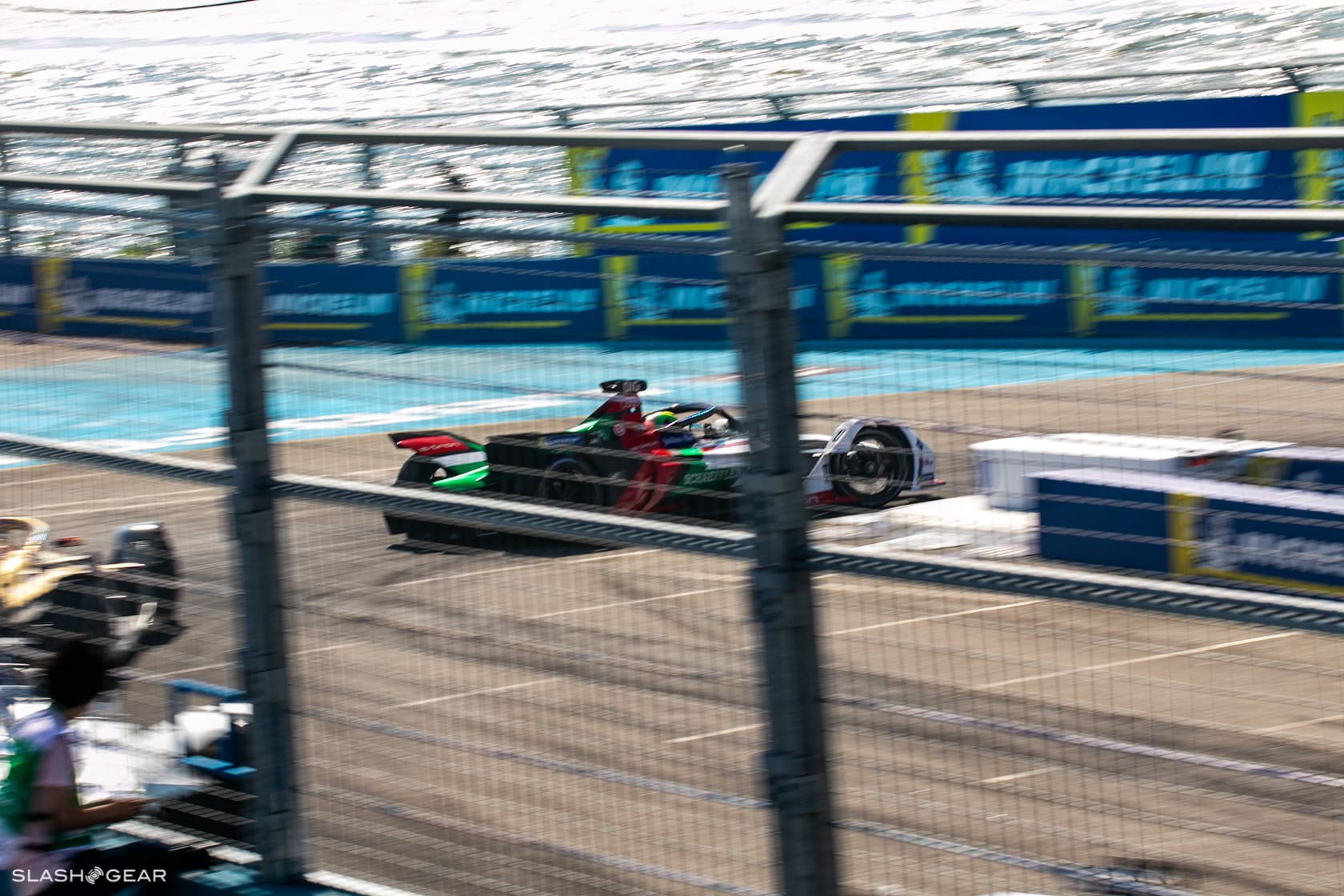 These passes are not always rewarded, though, as they cost energy. “So, therefore, you actually penalize yourself not at that instant but 5-6-7 laps down the line.” he said. “These early actions could take the driver out of podium contention if they are not paying attention. Sometimes it’s better to give up a position early in the race, especially if it translates into finishing in the points.”

Managing the thermal properties of the batteries often becomes an equally complicated strategy. “We are given a bit of [battery] information there, and the car does its bit,” McNish says. “But at the same time, whenever you put energy back in, you also are increasing the battery temperature.”

All the manufacturers and teams have the same battery and thus the same thresholds. The faster you feed the energy back into the battery, the more heat you generate, the less electricity that can be stored. “So, therefore, that is an area where we are trying to control through our software. How do we put the energy back in [to the battery] and make sure that it’s at the smoothest rate possible? Also, one [a recharge rate] that we get the least compromise at the last lap of the race.” 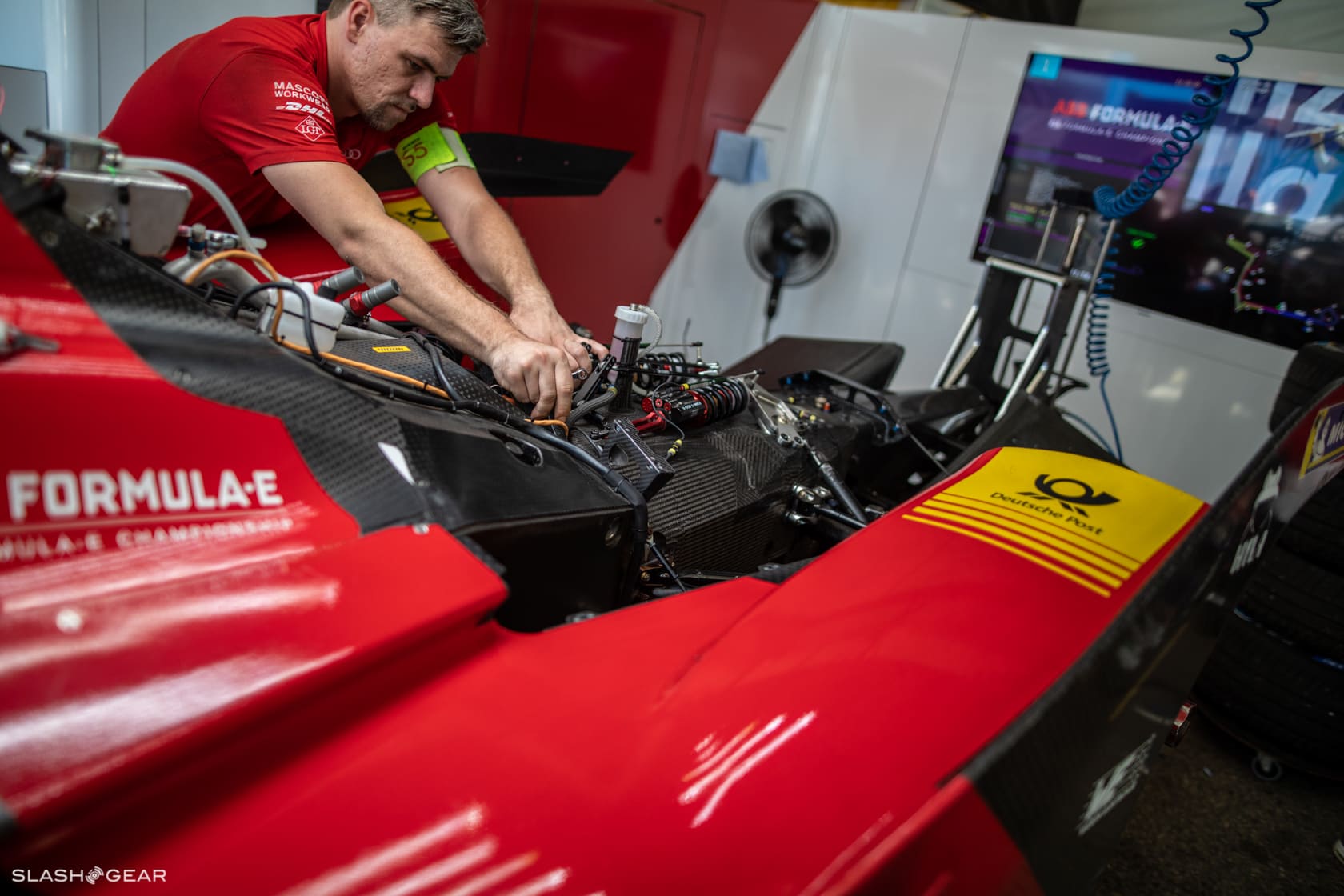 There’s a balancing act between harvesting energy through the regeneration system and being able to store that energy in the battery. If energy is forced into the cell too quickly, the car’s battery could still run out of energy before the finish line.

The hardware development is locked for the season by the Fédération Internationale de l’Automobile (FIA). However, the teams are free to develop their energy management software throughout the season.

“What we do is develop the software. There’s a learning that is constantly ongoing, and it’s done in the simulator, and it’s transferred onto the test track and then onto the racetrack.” McNish explained.

Racing into the future

Audi’s team – like the others in Formula E – may be focused on getting the most out of each race, but the competition has a secondary purpose, too: changing the way everyday drivers look at electrified vehicles. At the same time, the technology developed to make the race cars more effective can also have a huge impact on future EVs you and I can drive. 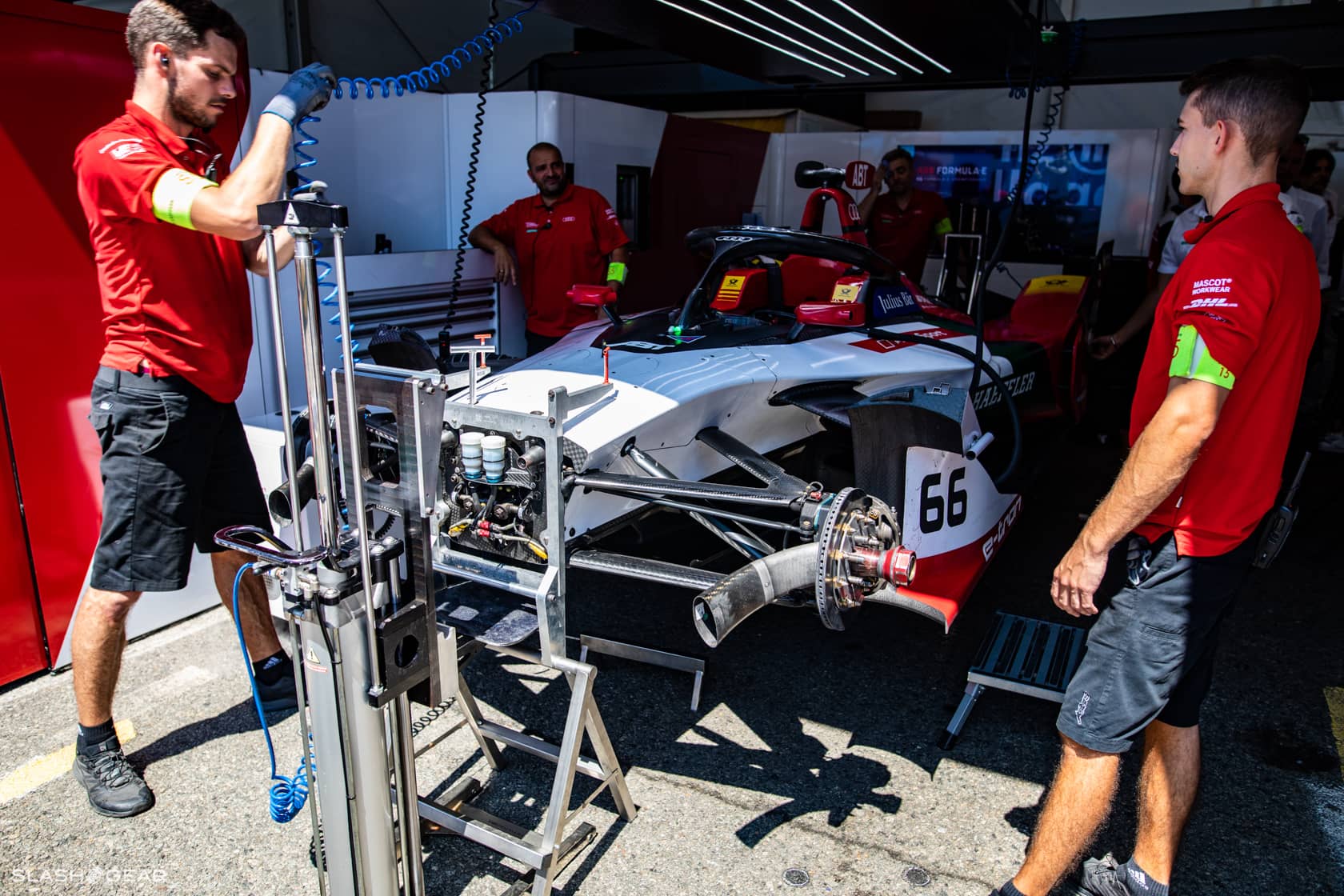 “The energy management strategy is what will have the most significant impact [on future race cars and road cars],” McNish predicts. “There was some doubt about this whole concept [at Le Mans] about storing lost energy and then using it again. The idea of racing with anything but petrol was a radical concept. There was a lot of doubt: it was achievable, but was it actually going to work and was it going to be a benefit?”

“Then the first time you drive it, you realize the benefit. But [at the time] it was that out-of-the-box thinking,” McNish, who has been racing since 1981, said. “This is where I think it’s exciting for us now, because there’s a huge rate of change.”

“In 1991-2001 it was all still gasoline engine power,” McNish explained. “2006 was the first time that [Audi] ever raced with anything that wasn’t gasoline. The first international race that was won by anything apart from a gasoline engine car was Sebring 2016,” McNish said, referring to Audi’s diesel-engined racers. 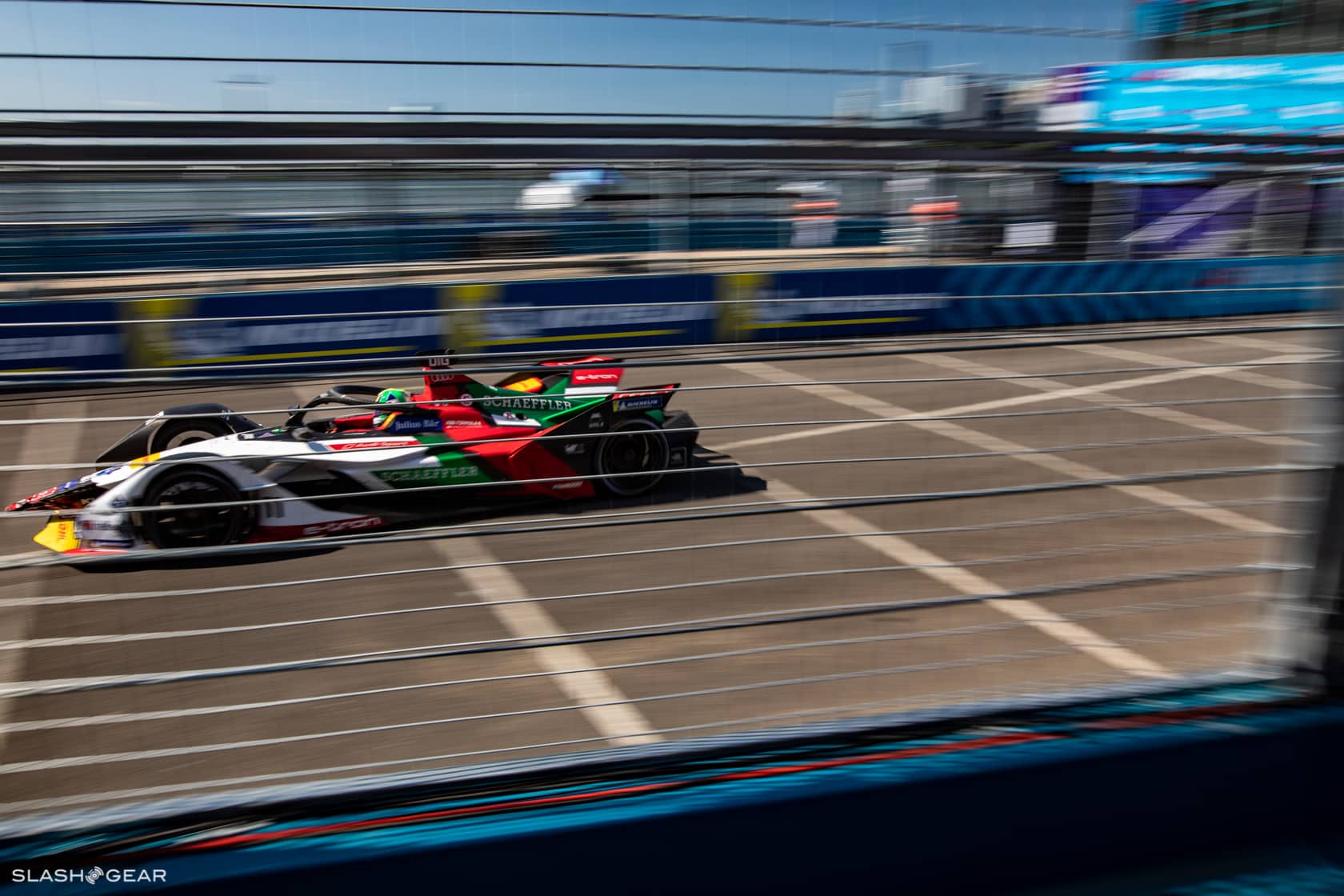 Since then, though, the rate of change has been dramatic. “Within 12 years from there, we had gone from using something other than gasoline to hybrid, and now full battery electric vehicle,” the driver highlights. “It’s just a massive swing from what you’ve had for 80, 90 years beforehand. Not to say that’s all gone, but the change is so quick, and that’s what is exciting.”

McNish has been there at the front of the line to push for the latest technology. “What’s it going to be in another 15 years time? What can we think about happening? If you look at the Geneva show and CES and everything else it’s all combining – it’s not just the car industry – and everything’s merging.” 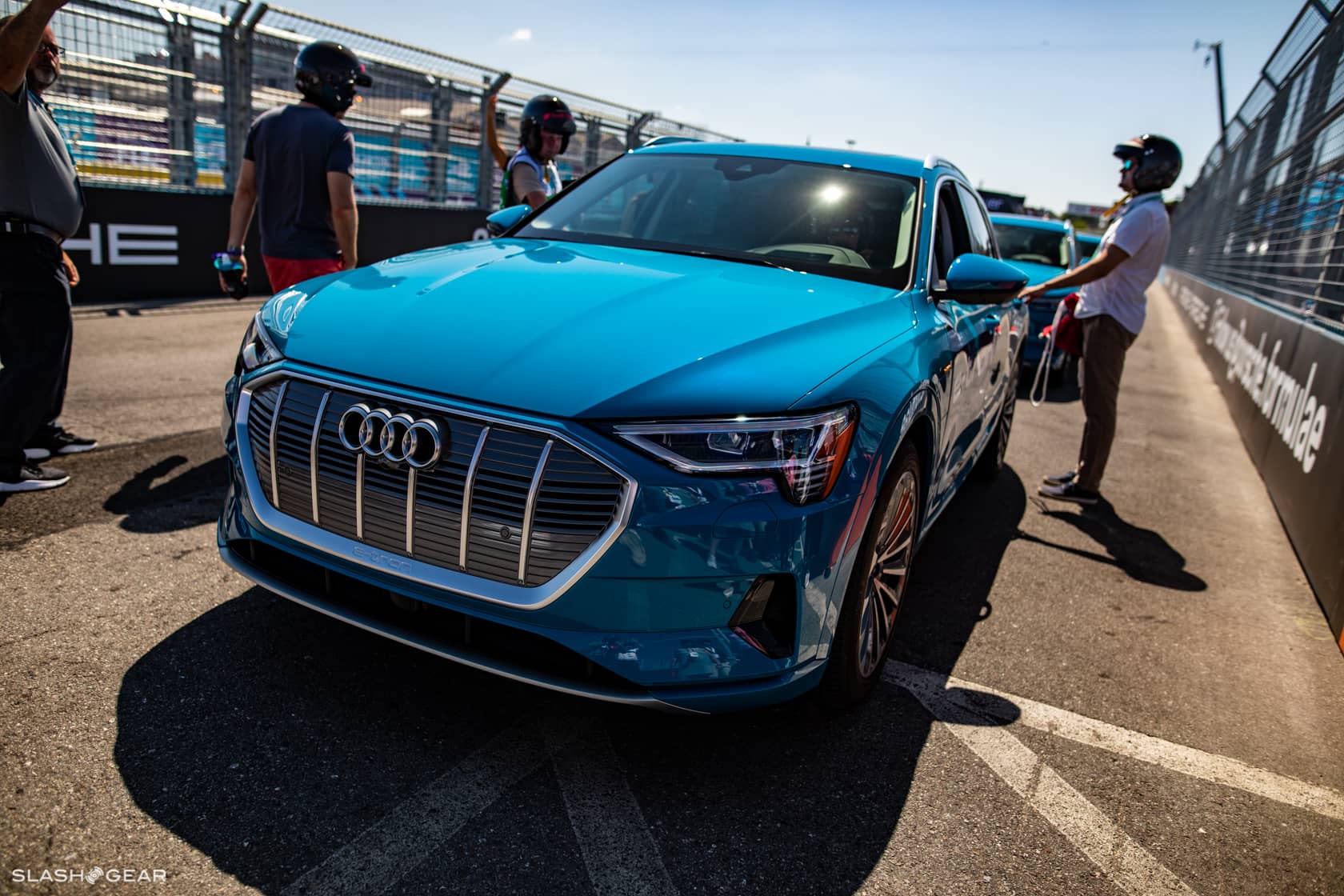 Audi is in a unique position there, as it’s one of the few manufacturers in Formula E with a full electric road car on sale today. Technology transfer between racing and production vehicles is nothing new, of course. Indeed, it’s been race cars that have helped shape some of the core drivetrain systems in Audi’s line-up for years, now.

That crossover has “been a big factor for us,” McNish says. “You know through the Le Mans programs with the TFSI direct injection winning in 2001 and then six months later [TFSI debuts] on the road cars.” The migration of turbo fuel stratified injection (TFSI) from the track to the road happened very quickly and was an immediate benefit to customers. Previously, It was hard to increase both fuel efficiency and power.

It’s not just engines, either. “Then laser lights,” McNish joked, “because all old guys like me needed better eyesight at night.” These laser lights would later debut on the R8 LMX road car, and are now available on several other Audi models. 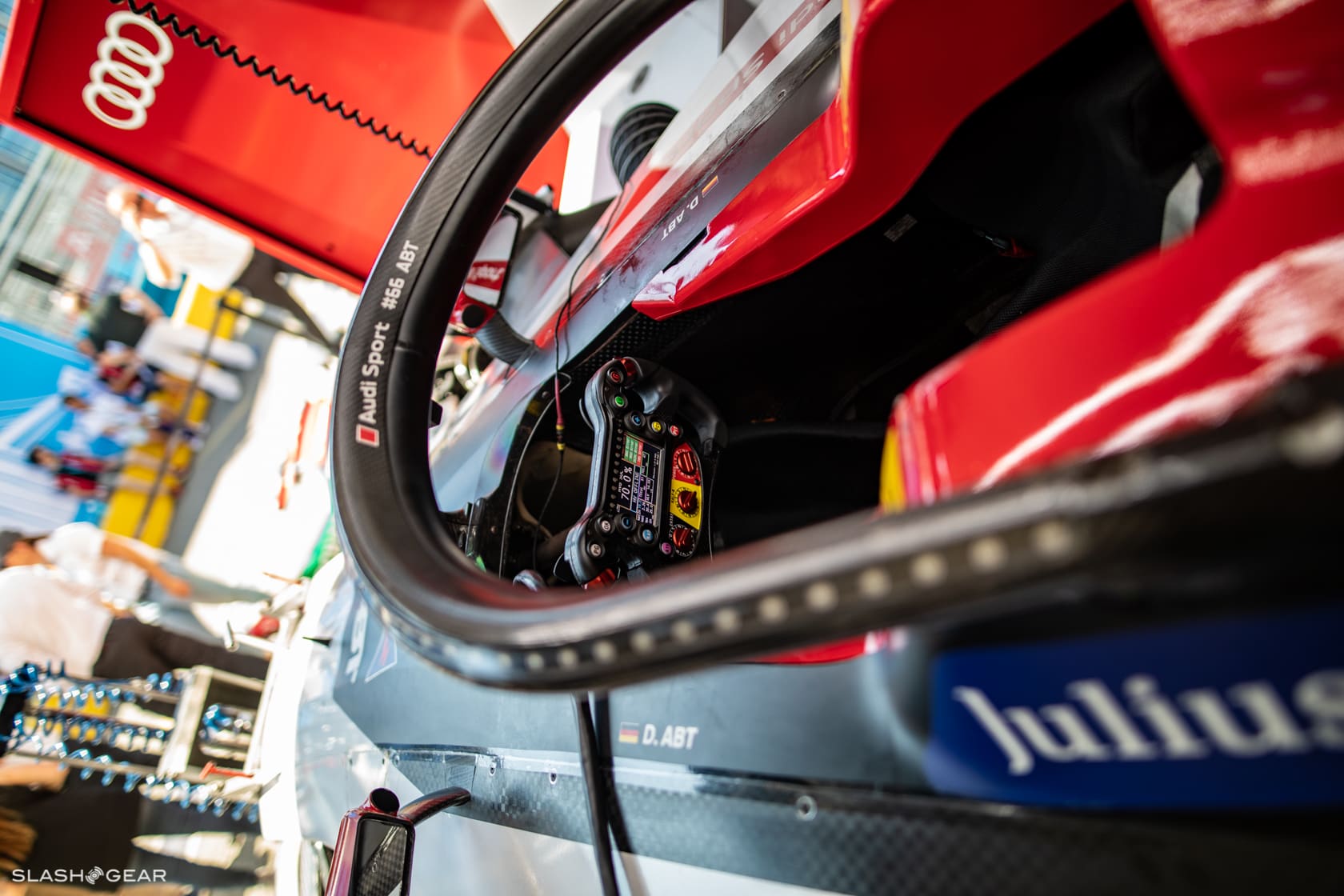 The exact way in which the technology translates from track to road may not be the same, but there’s no denying that racing can be a forge for upcoming production vehicles. “You know the e-tron, the name e-tron won Le Mans in 2012, this system is admittedly a bit of a different approach.” McNish explained. The Audi R18 e-tron used a flywheel and later batteries to store energy. “But the e-tron technology has always been a key part, and that still continues to direct things at the moment.” 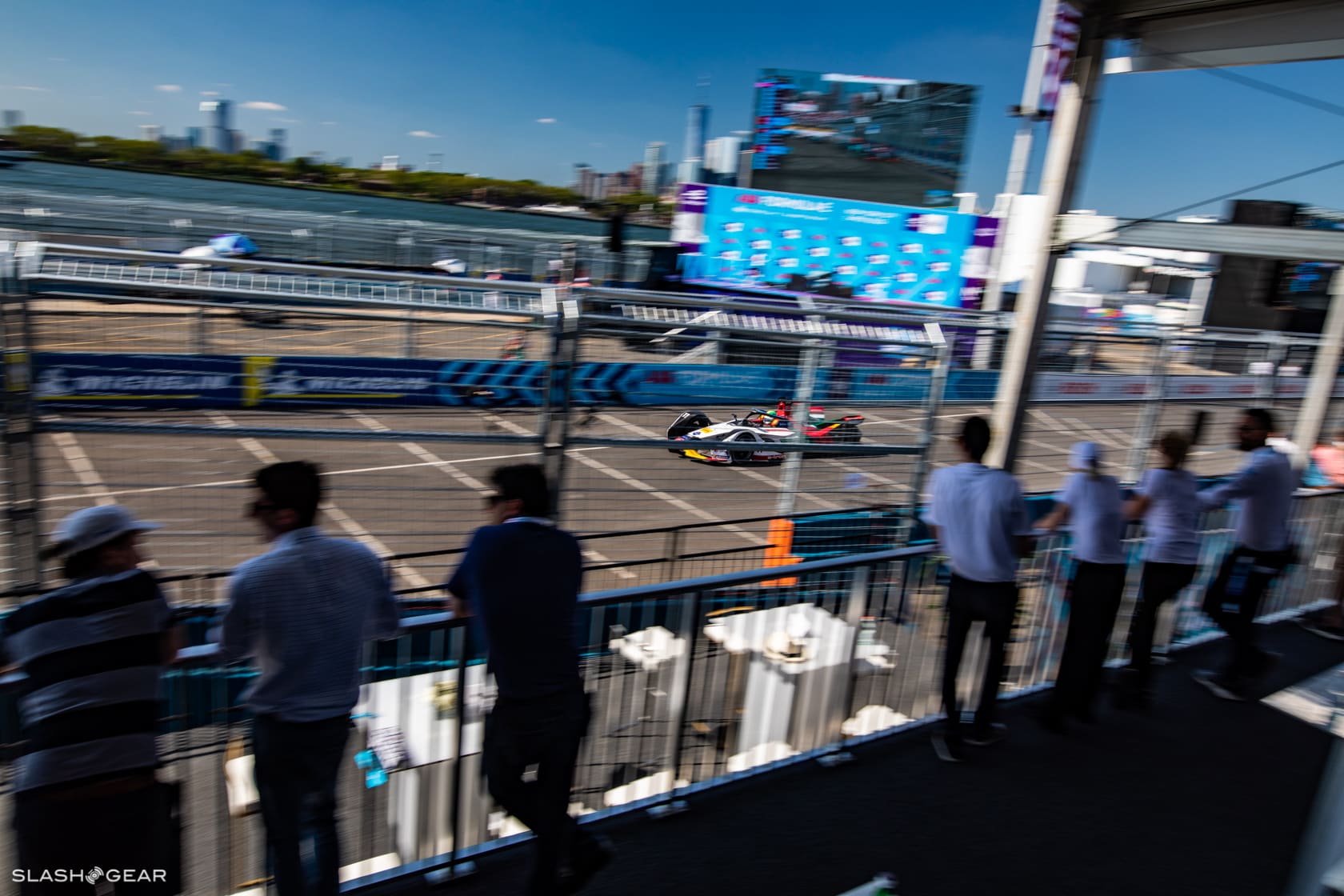 The high point for the Formula E program coincided with the launch of the e-tron road car “A few days after the race, e-tron launched in San Francisco, so we came here (NYC) and won the championship,” McNish recalled. “Then thankfully I was able to go to San Francisco and say We Won! We Won! During the unveiling of the e-tron.”


Race on Sunday and sell on Monday

Clearly, the engineers responsible for Audi’s production cars can’t simply raid the race team’s garage for their tech. In fact, it’s arguably an even closer relationship.

“That learning from racing crosses over because Audi Motorsports sits directly underneath Technical Development,” McNish said. That positioning helps reduce the typical red-tape that some companies run up against internally. “It doesn’t sit under marketing, it’s under technical development, and so, therefore, there was a great understanding and cross-pollination of people and also of the way you design and build a car.”

With Audi – and its VW Group parent – investing so significantly in electrification, that transfer of technology isn’t just one way. Indeed something McNish is excited about for the Formula E Generation 3 cars already has its basis in the e-tron SUV. 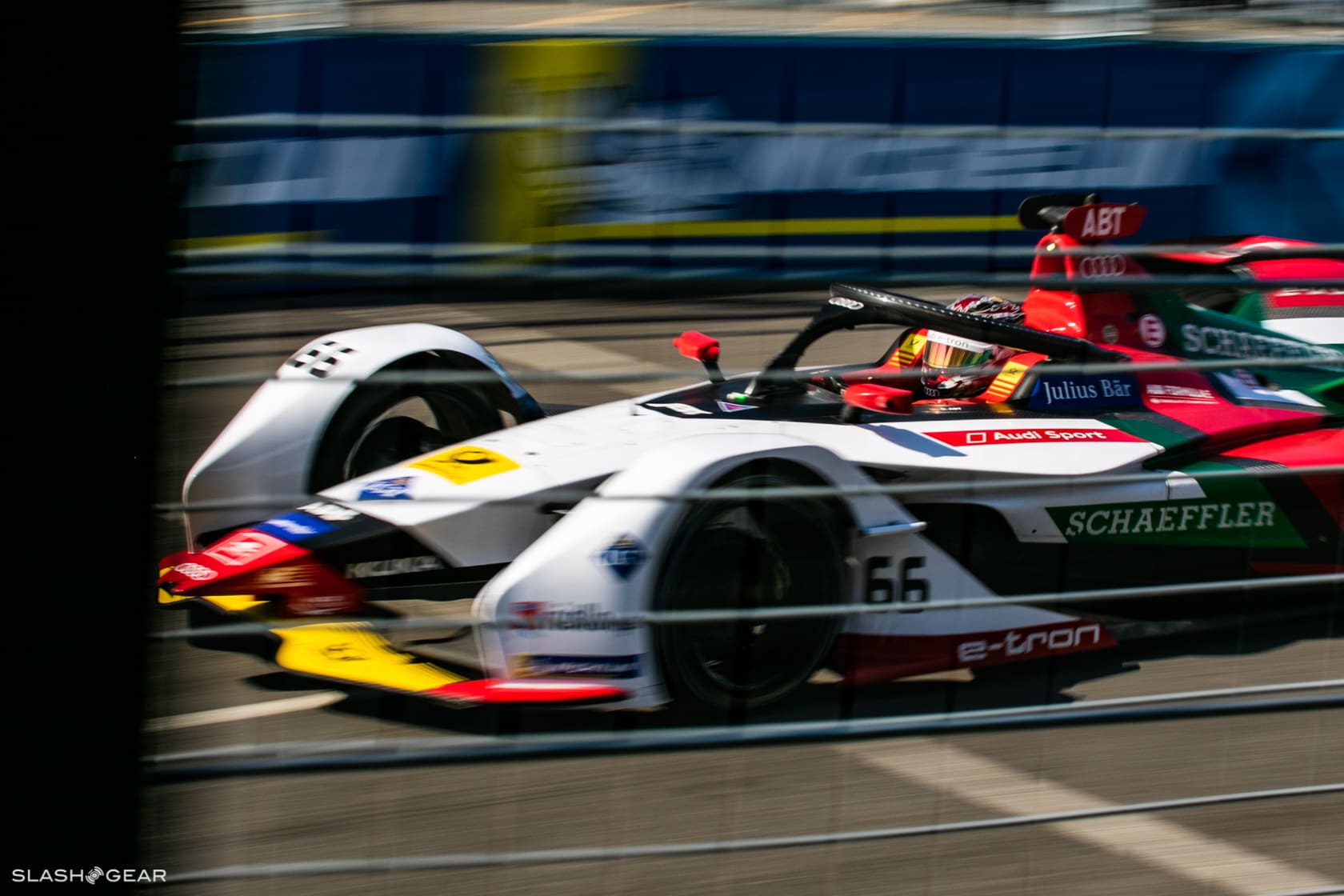 “We’ve just done the first season with the Generation 2 car,” he explained. “I’d like to get, as a good Scotsman, more stuff for free, so more energy for free, more capacity in your batteries for free, and that’s under discussion within the technical regulations at the moment.”

“We are also entertaining the idea of a front electric motor that we can use to recuperate additional energy,” McNish continued, something that keen 2019 e-tron SUV early-adopters will be very familiar with. “So we can recuperate at the front axle like what we did at Le Mans, but also the rear. With the added recuperation at the front, we can now recuperate on both sides, store it and boost just like the e-tron road car.”