The Mustang Mach-E isn’t even at dealerships yet, but that hasn’t stopped Ford Performance and RTR from turning the EV into a seven motor, 1,400 horsepower race and drift beast. The Mustang Mach-E 1400 starts out with the body of the upcoming Mustang Mach-E GT, but then Ford’s engineers along with motorsports icon Vaughn Gittin Jr. lay on the power and tech for something truly special.

The big reveal comes after a month or so of teasing, including a “leaked” video of the prototype in testing. That clip failed to convince most who watched it that it was an actual leak, but it’s hard not to be convinced by the Mustang Mach-E 1400 itself.

Seven electric motors. An expected peak of 1,400 horsepower. Lashings of downforce, and a taste for going sideways and ripping through its rubber. If, for some reason, you were still laboring under the impression that electric cars were dull and pious, this particular Mach-E would quickly correct that. 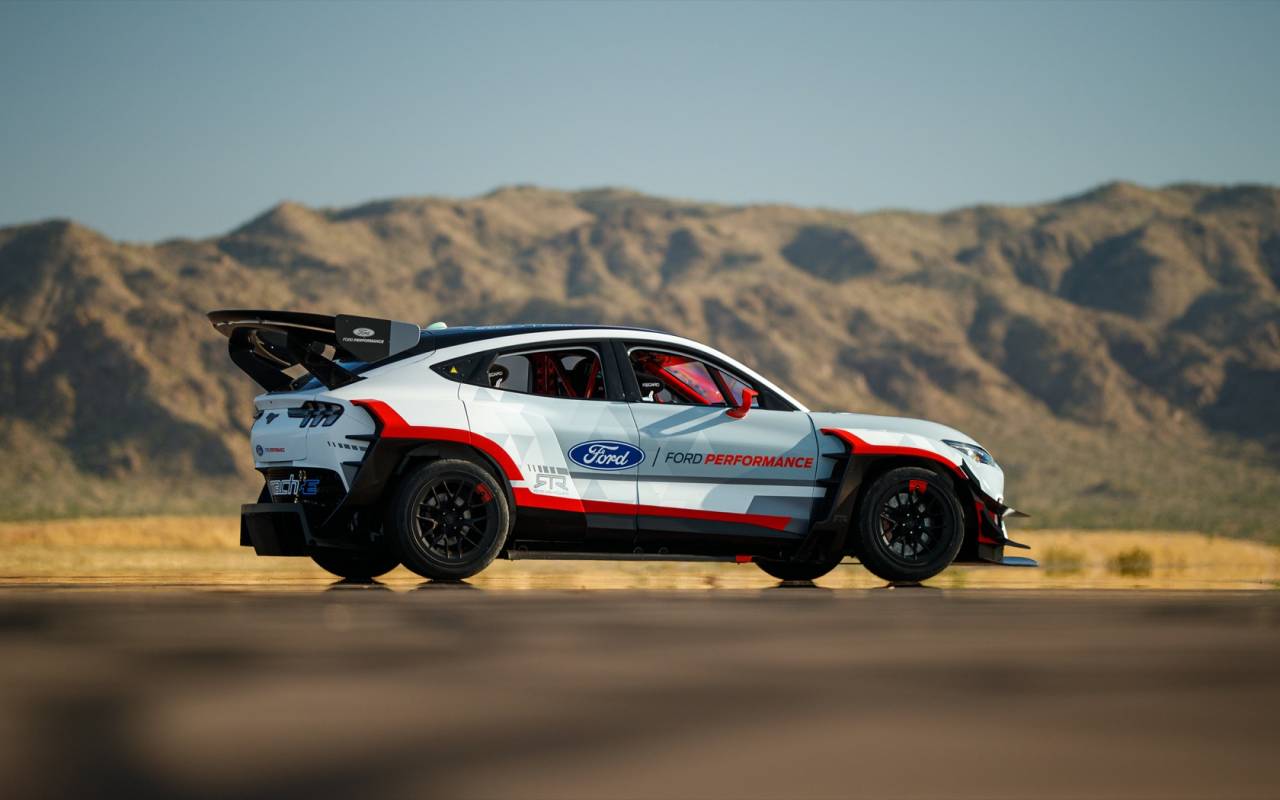 Three of the motors are at the front, attached to the front differential. The remaining four – sandwiched, pancake style – are at the rear, with a single driveshaft that likes them to the differentials. It’s not only a setup designed for serious bragging rights, but for extreme flexibility too. 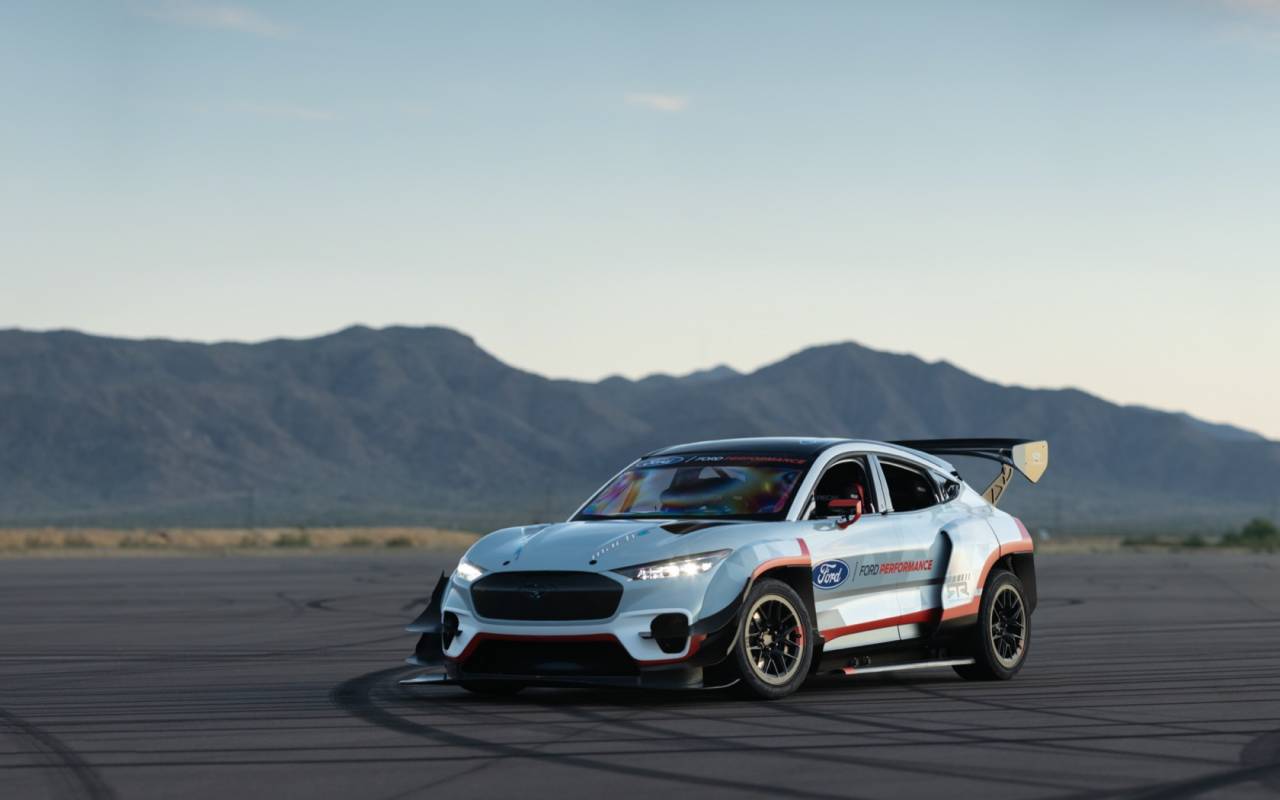 That’s because, while the Mustang Mach-E 1400 may be built for fun on the one hand, it’s also designed to be a learning exercise. “Mustang Mach-E 1400 is a showcase of the art of the possible with an electric vehicle,” Mark Rushbrook, motorsports director at Ford Performance, explains. 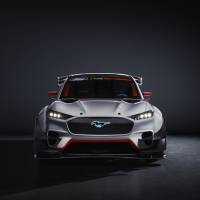 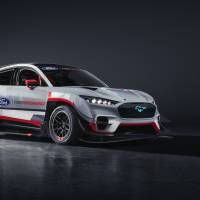 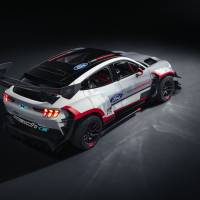 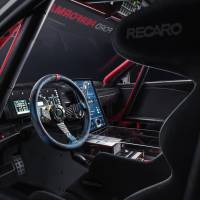 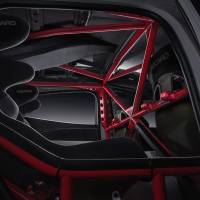 For a start, it’s a way to explore different motor layouts and how things like front-, rear-, or all-wheel drive impact energy consumption and performance. There’s the ability to direct all of the Mustang Mach-E 1400’s power to the front, or to the rear, or alternatively to split it between the two. Meanwhile different control arms and steering changes at the front flip the EV from a drift machine to a track car. 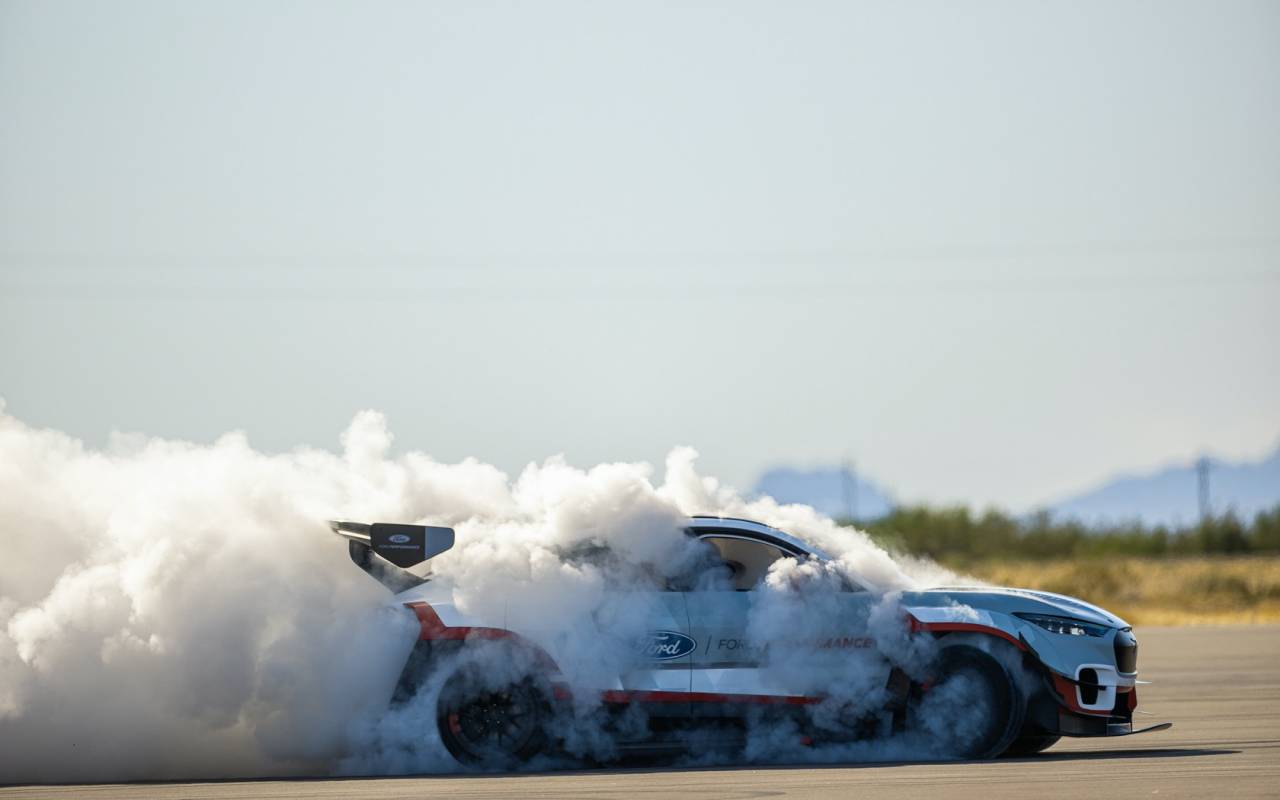 Of course, this particular test mule looks like few others. Ford and RTR added vast cooling ducts, a front splitter, dive planes, and a huge rear wing for a start, not least in the name of generating downforce. The expectation is that the EV will deliver more than 2,300 pounds when at 160 mph. 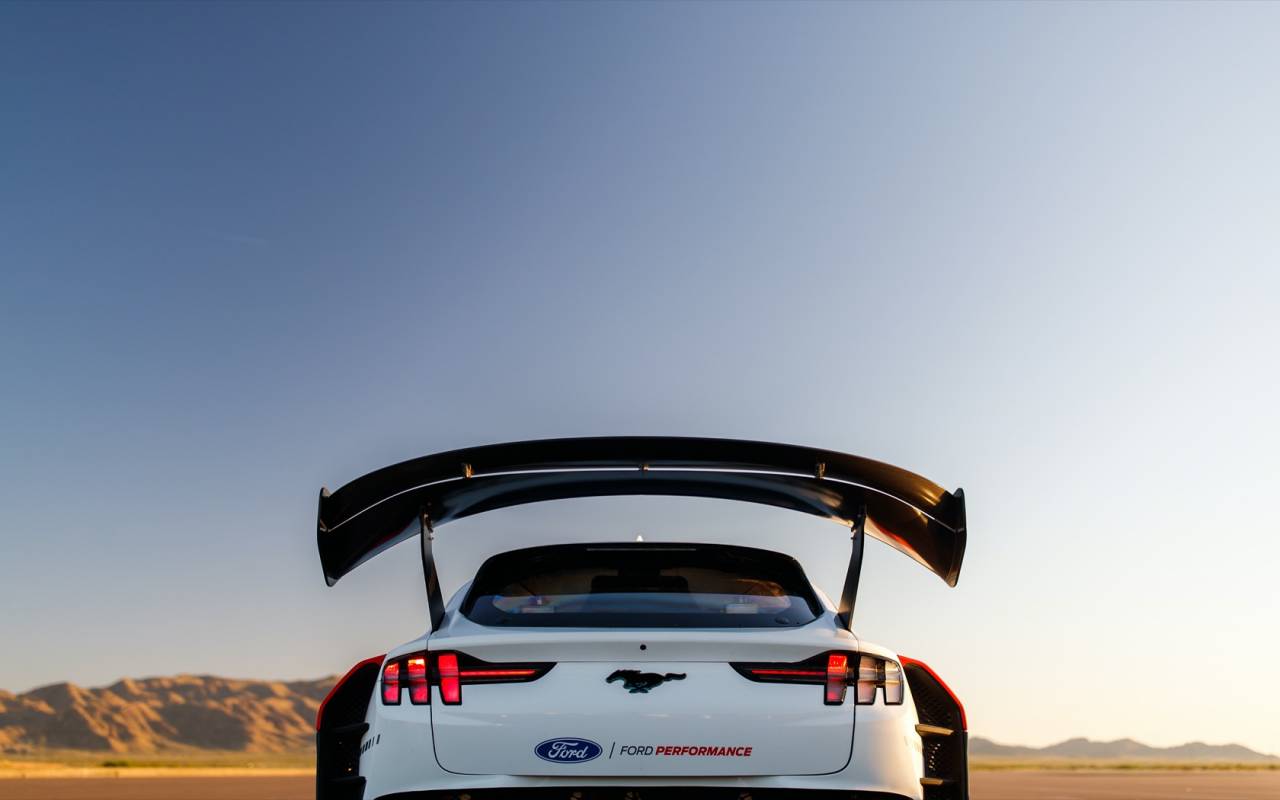 The other issue the distinctively-flared bodywork addressees is cooling. The 56.8 kilowatt hour battery uses nickel manganese cobalt pound cells, for their density and high discharge rate: those seven motors are hungry, after all. It’s designed to be cooled during charging using a di-electric coolant, cutting down on wait time in-between each trip out to the track.

As for slowing, there’s both regenerative braking and then an electronic brake booster. Ford adds ABS and stability control to make sure the Mustang Mach-E 1400 stays stable even under aggressive slowing from the physical Brembo brakes. A hydraulic handbrake system has been added for drifting purposes, which can cut off the power to the rear motors for some sideways action. 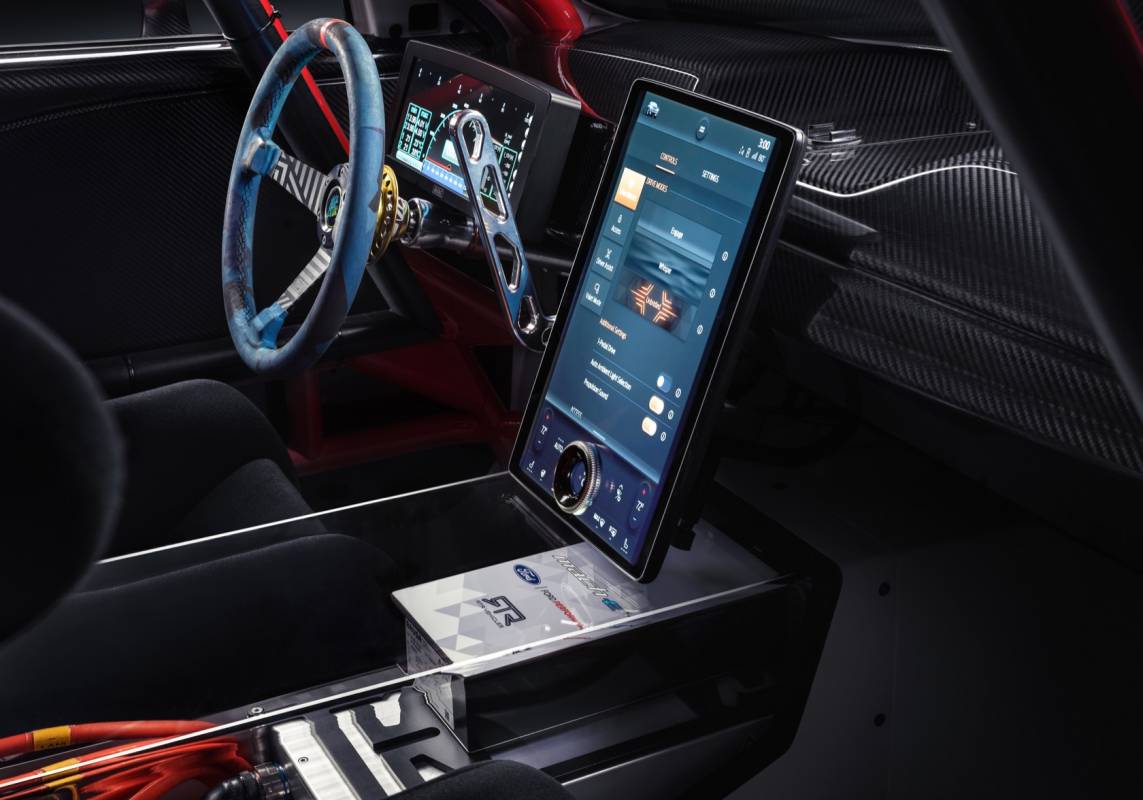 As for the bodywork, that mainly uses carbon fiber for its light weight and high strength. However Ford has also been exploring using organic composite fibers as an alternative that’s lighter and greener. That’s what the Mustang Mach-E 1400’s hood is crafted from. 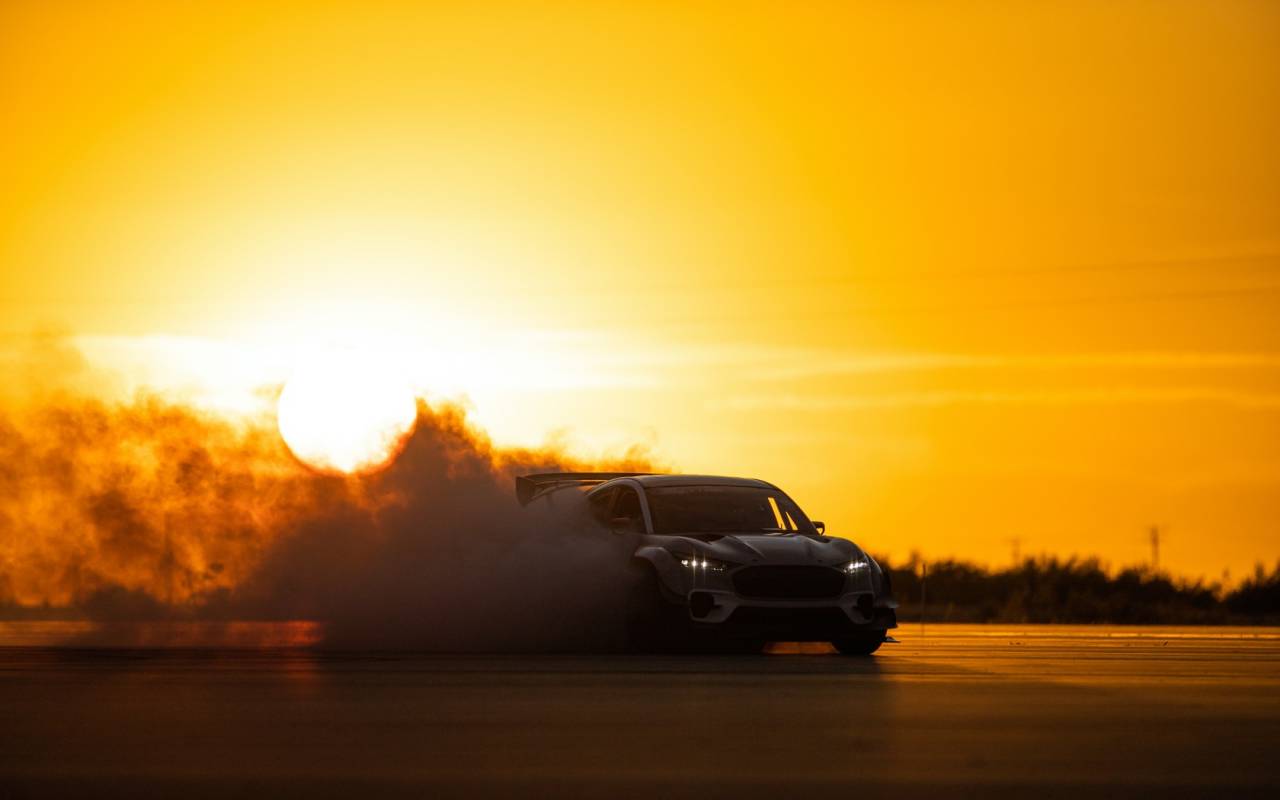 “Mustang Mach-E is going to be fun to drive, just like every other Mustang before it,” Ron Heiser, chief program engineer, Mustang Mach-E, says, “but Mustang Mach-E 1400 is completely insane, thanks to the efforts of Ford Performance and RTR.” It’ll be headed out to convince arguably one of EVs’ toughest potential markets, NASCAR fans, with a public debut at an upcoming race.