What have Ford Performance and RTR done to this drifting Mustang Mach-E?

All eyes may have been on the new Bronco this week, but Ford’s other big truck news of late, the Mustang Mach-E, seems intent on stealing back the limelight. Announced last year, the electric crossover heads to dealerships later in 2020, though the feistiest Mustang Mach-E GT won’t arrive until next year. There may, though, be something even more excessive than that, waiting in the wings.

Lest you forgot, Ford is promising a healthy jolt of performance from the GT-badged version of its electric crossover. Power – in kW and horsepower – are yet to be confirmed, but the automaker says 0-60 mph should arrive in under 4 seconds. It’ll be all-wheel drive, and Ford is targeting 250 miles of range from its 88 kWh of available battery.

Not bad at all, no, but something more aggressive still could be in the pipeline. Ford Performance took to Twitter with a teasing video showing what looks to be the aftermath of a whole lot of rubber-burning fun, complete with a soundtrack of electric whines. At the end, it’s the familiar “electric blue pony” that Ford is using for the Mustang Mach-E, and the promise of more details on July 21st.

Ford Performance tags a number of high-profile drivers, too. Ken Block hardly needs an introduction to anyone with a passing interest in sideways driving, while Hailie Deegan is an 18 year old stock car racing driver who happens to be on the Ford Racing Development team. Joey Logano, meanwhile, was 2018 NASCAR Cup Series Champion, and has the keys to a Mustang.

Perhaps most interesting for their involvement, though, is Vaughn Gittin Jr. He’s a drift champion, sure, but also the creator of Mustang RTR, which makes it its business to take Ford’s car and coax even more entertainment from it. RTR shared the same teaser as Ford Performance did over on their Instagram, and now Gittin Jr. is posting out short clips of what looks to be a heavily-modified electric Mustang. 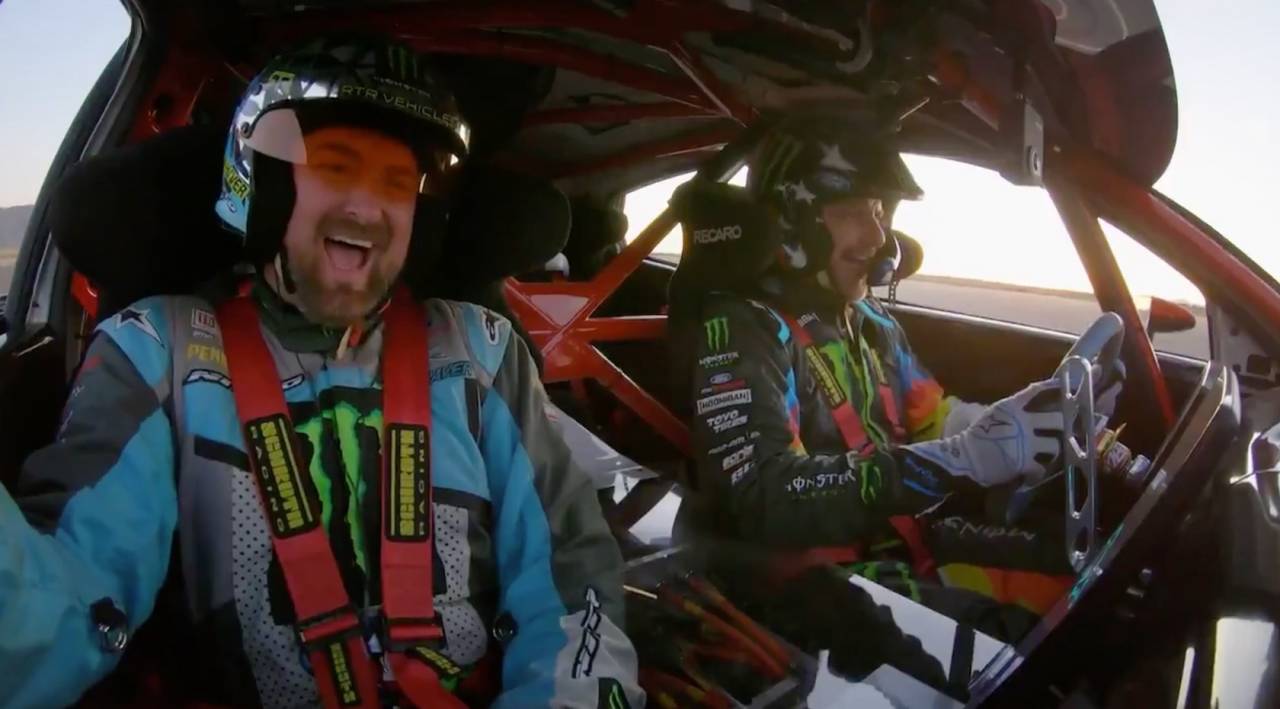 “We have been very busy at the RTR Vehicles lab putting in over 10,000 man hours building what I consider to be our most significant and most epic build to date,” he tweeted. “The result of this awesome collaboration with our partners at [Ford Performance] is nothing short of a game changer!”

From the look of it, the goal is to tap all that electric torque. First, Gittin Jr. took Deegan out for a spin in the car, and she doesn’t seem disappointed.

That moment when your mind explodes with joy! Was fun seeing @HailieDeegan experience what's to come!! #FordMustang #Mustang pic.twitter.com/W79SwAAklD

Next it was Ken Block’s turn. “That’s really good torque,” the ‘Hoonigan’ comments, before he and Gittin Jr. dissolve into childish giggles at the mule’s power.

My bro @KBlock43 and I turning in to little kids again!! See what has us so excited 7/21! #FordMustang #Mustang pic.twitter.com/cHhTwmR53D

Just what might be on the cards? It’s hard not to think of the “leaked” video of a “secret electric vehicle” that emerged earlier this month, and which left more than a few viewers convinced it was an attempt at a viral campaign by Ford. After all, Gittin Jr.’s in-car videos seem to show him and his fellow drivers in a vehicle with rear seats (and the Mustang Mach-E’s big infotainment display, too).

Authenticity of the leaked video aside, it certainly matches up with what Gittin Jr. has been teasing. The car looks like a seriously stripped-down Mustang Mach-E, complete with roll cage inside, and very little front and rear bodywork outside. That would fit with RTR’s recipe of pulling out excess weight in the name of maximum performance. 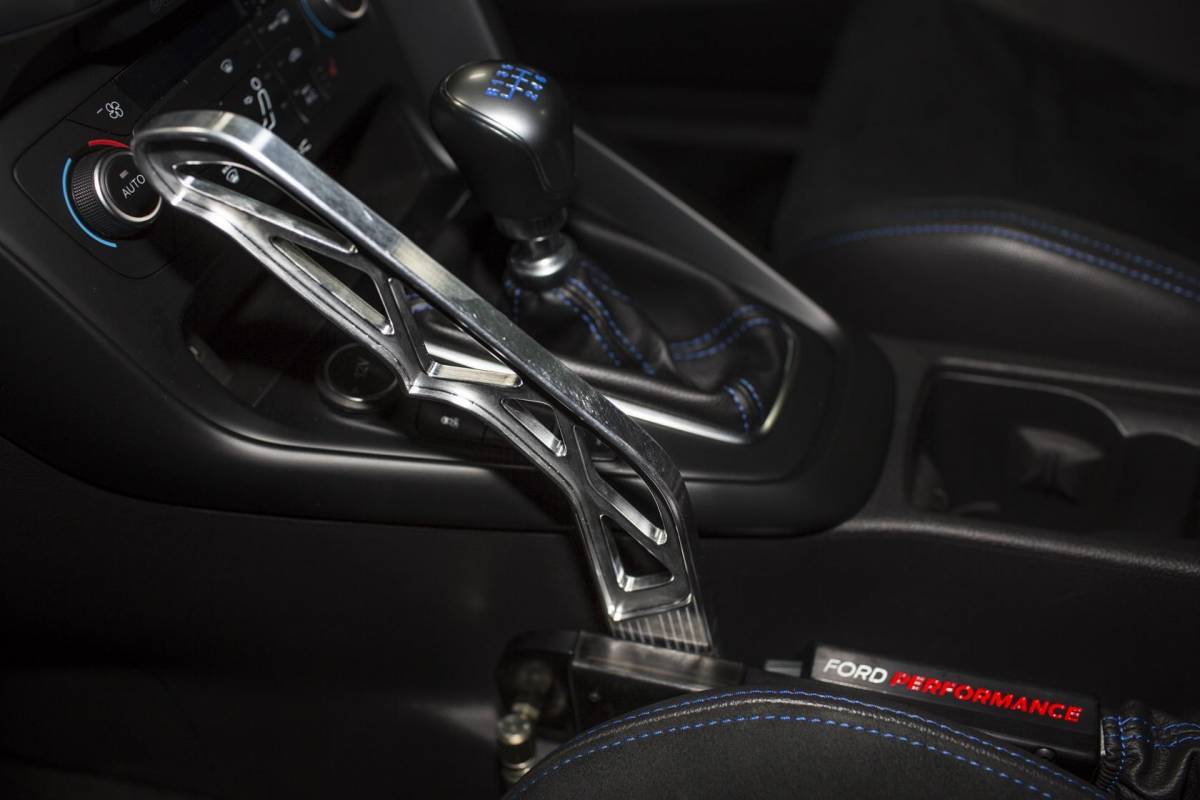 The video from inside the prototype shows a dashboard-mounted handbrake, too, which looks markedly similar to the Ford Performance Drift Stick. Announced all the way back in 2017, it’s an aftermarket handbrake designed to work with a vehicle’s electronic systems, rather than with a direct mechanical link. It was enough to get Ken Block onboard with the idea.

At the time, Ford showed it off as an accessory for the Focus RS. Pulling it opened up the rear-drive unit clutches, then applied hydraulic pressure to the rear wheel brakes so as to lock them up. The result was drift, but without any use of a traditional clutch.

The Mustang Mach-E, of course, doesn’t have a traditional clutch either. Only time will tell whether this is a one-off designed to give the electric crossover a halo car moment, or something – even more excitingly – that might end up in dealerships at some point. Ford is no stranger to coaxing out excessive performance from cars with the Mustang badge, after all, and there’s no reason that the Mach-E should be any different.