The 2021 Cadillac Escalade has a golden goose problem

The Escalade is Cadillac’s golden goose. Other models in the automaker’s range have struggled to find purchase, as it tries its best to pitch a vision of “American luxury” that will distract buyers from the German segment mainstays. Escalade demand, though – even as the outgoing model aged, and this replacement neared – has remained solid.

That can be a blessing and a curse when it comes to figuring out a replacement. The stakes are probably the highest they’ve ever been, with Lincoln’s Navigator receiving rave reviews – from myself included – and presenting a modern, distinctive alternative in a segment the Escalade has long dominated. Cadillac couldn’t play it safe, but that brings with it risk, too. 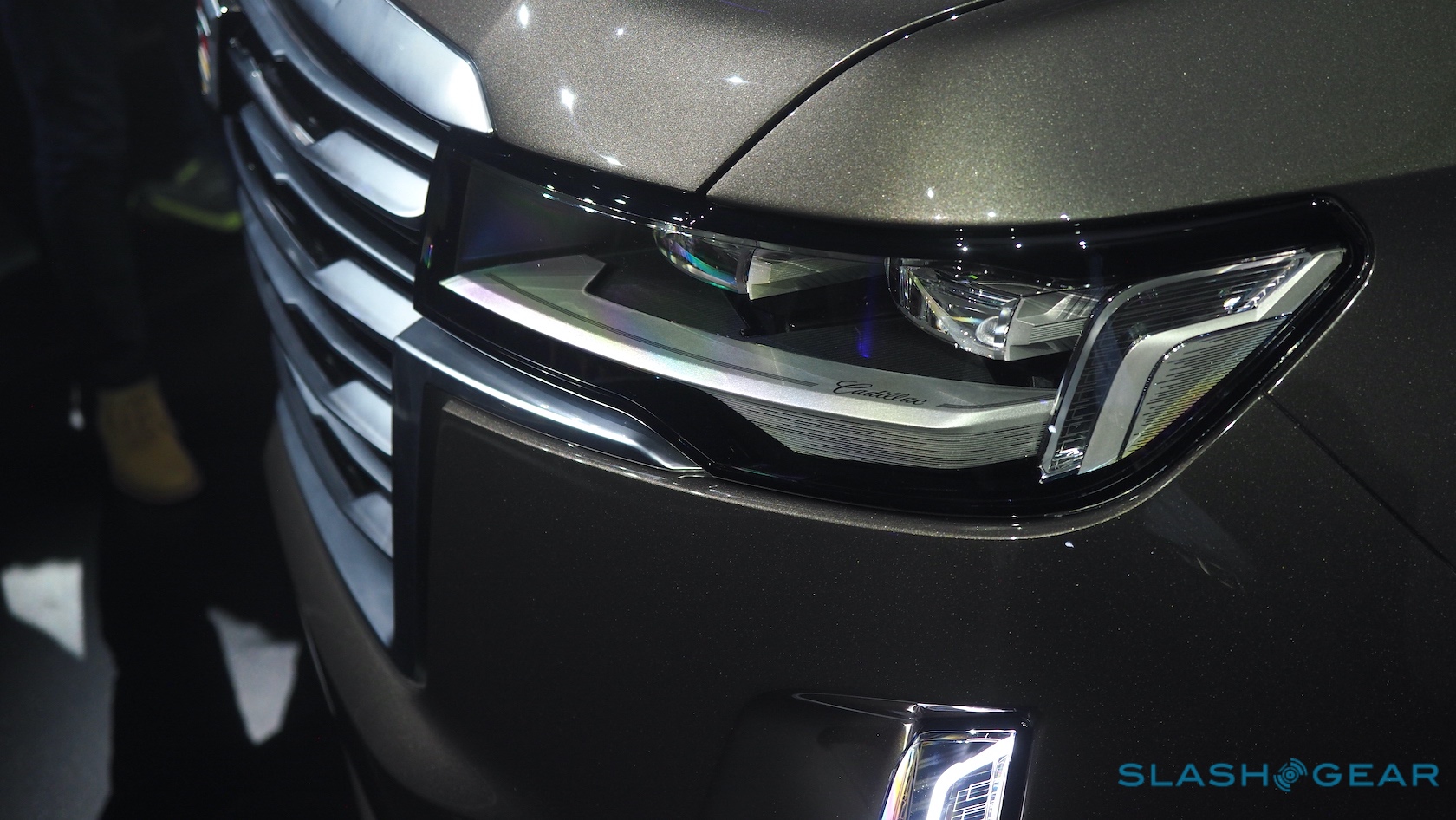 Turn off loyalists by inadvertently diluting what’s seen as giving the Escalade its unique personality, and the goose could well be stuffed. It’s a tough balance to strike, and I’m not sure Cadillac has quite got it right.

The last-generation Escalade may have been first unveiled back in 2013, but it still has presence on the road. A vast chromed grille with huge slats, flanked by towering headlamps, it was a slab-sided beast that teetered between Art Deco and Brutalism. Somehow, though, it worked.

Fast-forward to the 2021 Escalade, and it’s a far more restrained affair. The grille is still large, but is now filled with slim, sweeping lines; the headlamps are squinting LED eyes familiar from the CT6. Cadillac’s distinctive vertical light bars remain, but they simply bookend the fascia rather than bridge directly into the headlamp clusters. 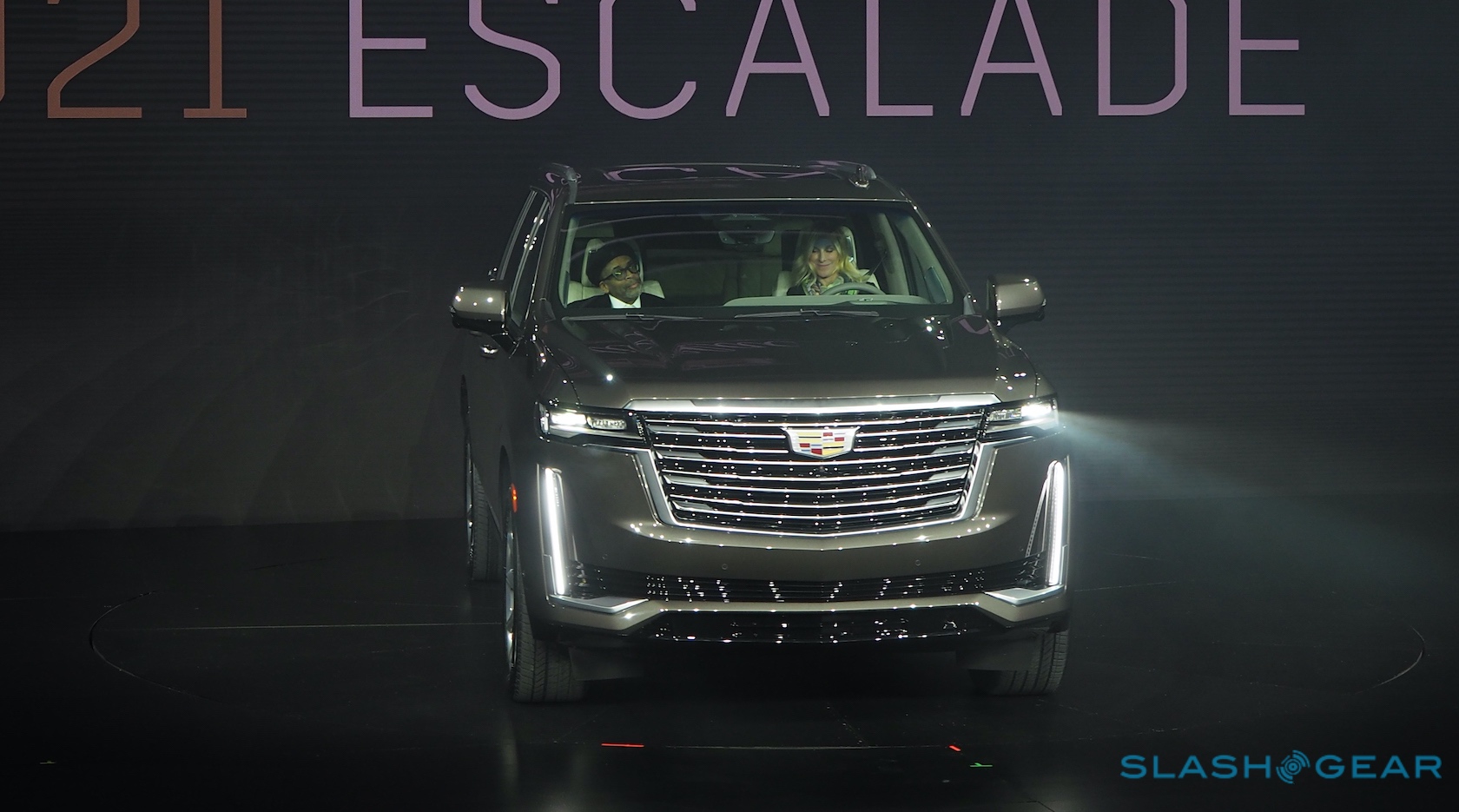 At the sides, the wheel arches lack some of the swollen heft of its predecessor; the kicked-up belt line where the rear doors meet the third-row glass robs the Escalade of its seemingly endless length. Despite the 2021 SUV being actually longer than the old model, it doesn’t really look it. Even the standard 22-inch wheels, huge by anybody’s standards, somehow manage to look small.

Past the bland, a killer cabin

Where the 2021 Escalade shines is inside. The old cabin suffered from mediocre third-row legroom and its glossy black dashboard plastics were an ugly magnet for fingerprints and dust. While it wasn’t entirely short on gadgets, the touchscreen was small compared to what rivals like the Navigator were offering. 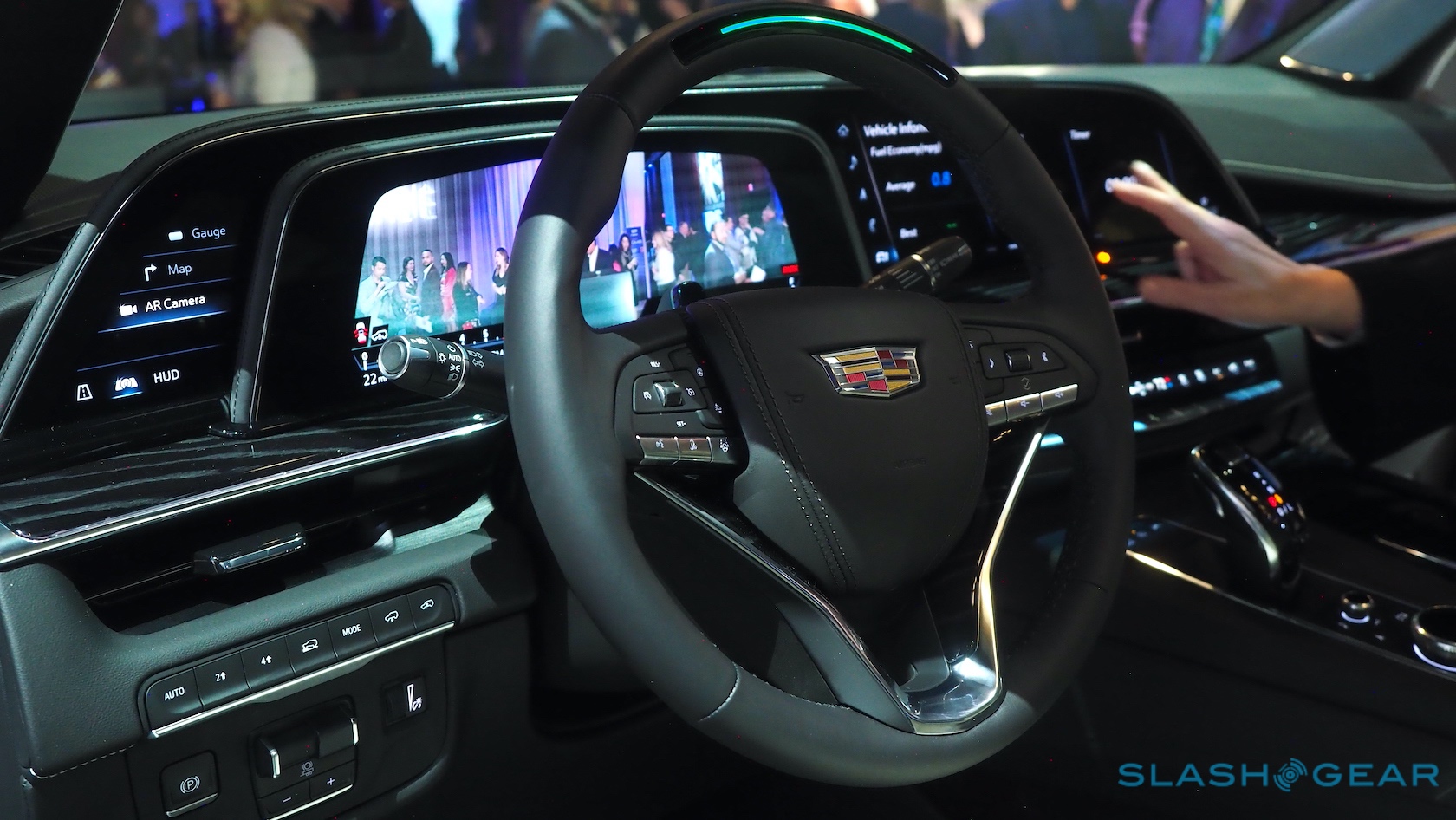 All that changes with the new Escalade. The change in underlying platform pays huge dividends in the rear: a whole 10-inches more legroom in the third row. Considering most automakers are happy to boast of fractions of an inch more space, it’s a vast improvement.

The dashboard, too, now wows. Cadillac may not have delivered a single, 38-inch curved OLED panel like it first implied, but its trio of wraparound screens are hardly a disappointment nonetheless. Crisply high-resolution, they emphasize the width of the cabin, where the old dash divided it down the center.

Older iterations of Cadillac’s infotainment system were – rightly – slated for their cluttered, confusing, and slow UX. The 2021 Escalade demonstrates conclusively that Caddy has learned its lesson. Easily customizable with gestures familiar from iPads and iPhones, it makes good use of the screen real-estate on offer by avoiding nested menu after menu. There are enough physical controls to keep the key functions a single touch away, but not so many as to feel like button overload. 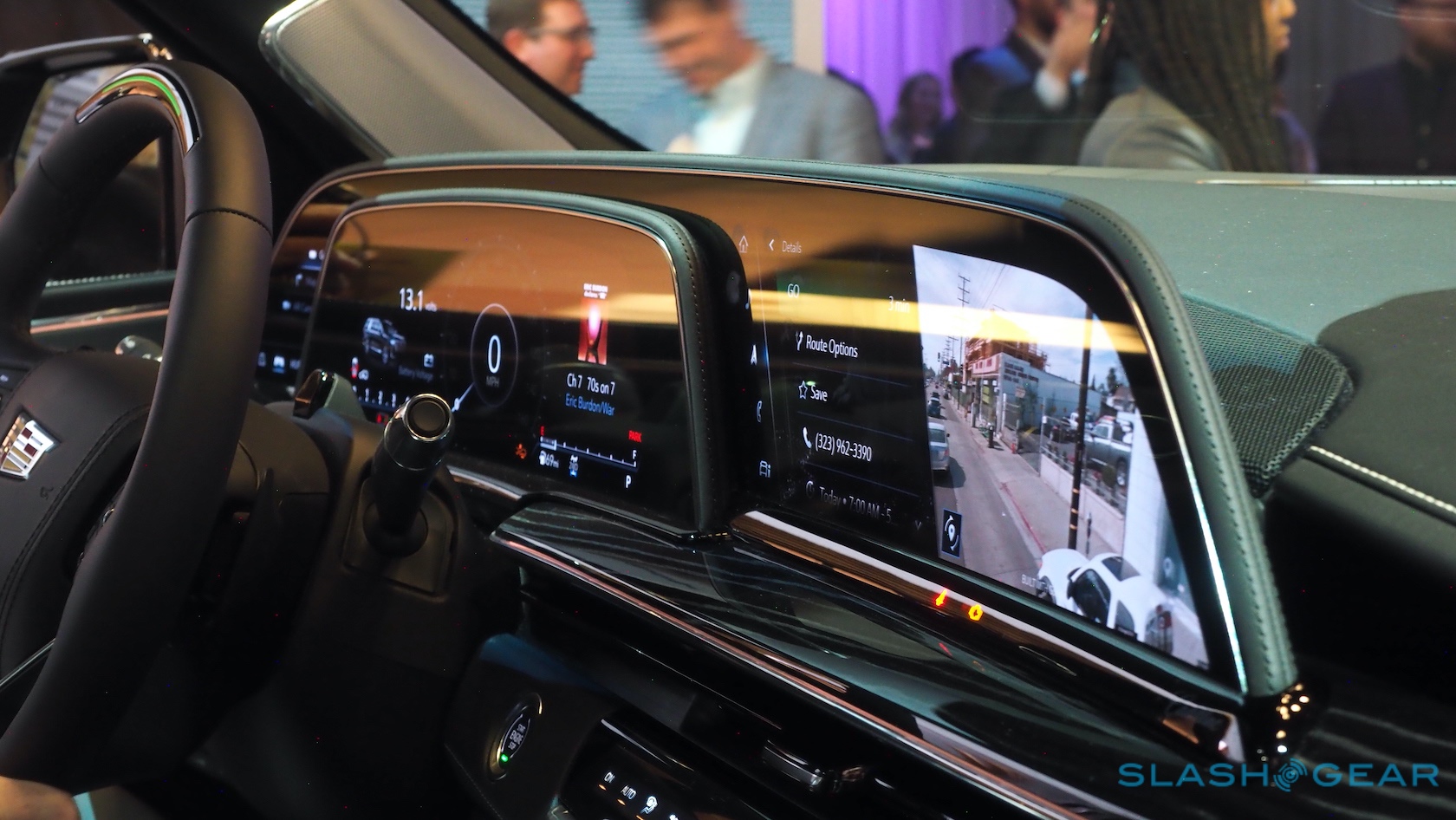 Super Cruise, now with automatic lane-changing, is present and correct, just as it should’ve been from the start: again, flagship feature for Cadillac’s flagship vehicle. NFC phone pairing and wireless charging are standard, and Cadillac liberally sprays USB-C ports about the cabin. Gone is the miserly sunroof of the old Escalade, with all but the entry-level SUV now getting a panoramic roof.

We still have questions – and Cadillac still has gaps

Vastly improved the cabin may be, but Cadillac still has some questions to address. The 6.2-liter V8 engine is likely to be more than sufficient to keep the 2021 Escalade thrumming along nicely, particularly with the optional Magnetic Ride Control and Air Ride Adaptive Suspension. A new 3.0-liter turbo-diesel should make for a more efficient option, not to mention bring in its bags of torque from low down in the rev range. 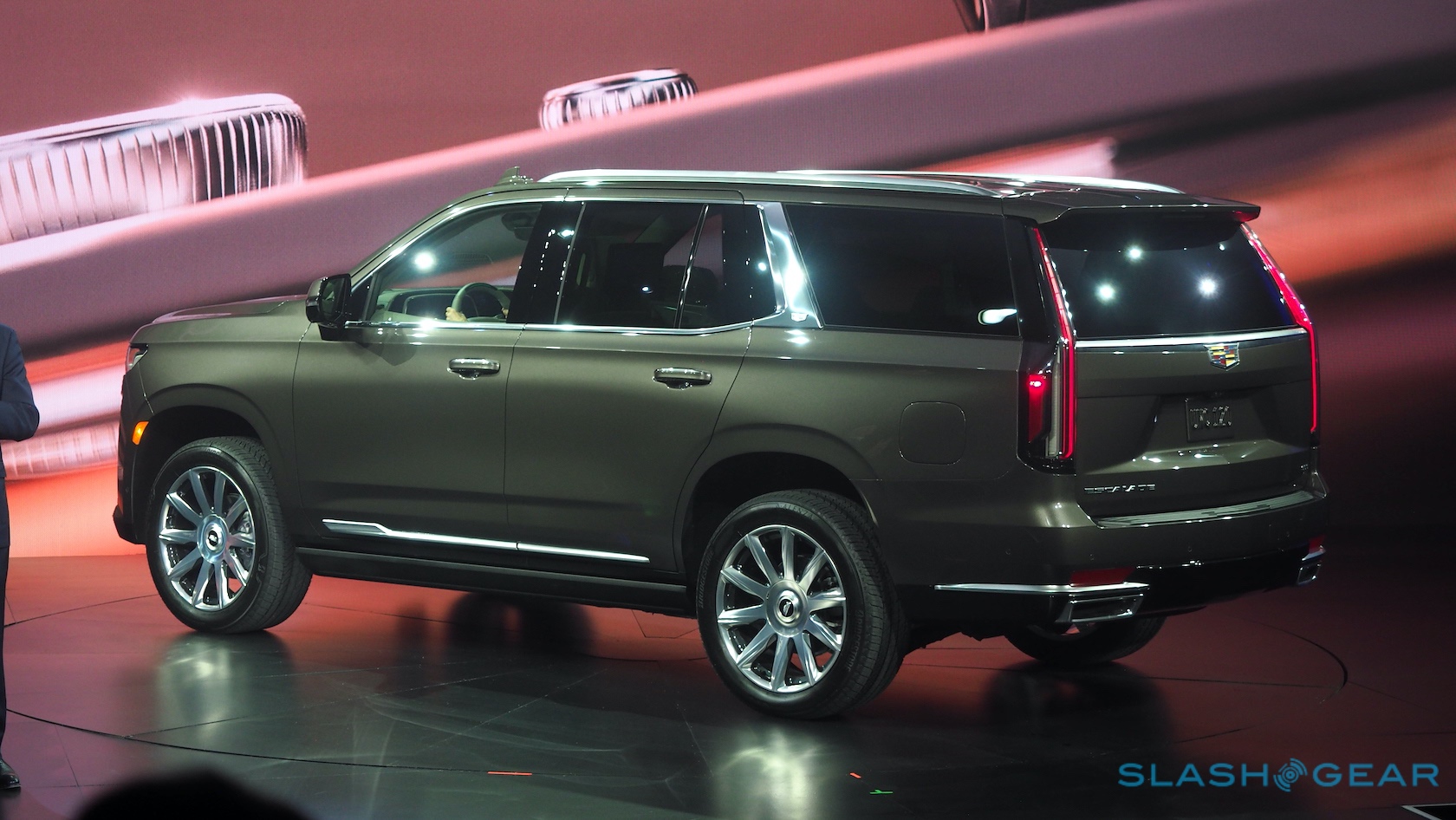 In the aftermath of GMC announcing the Hummer would return as an electric truck, though, the electrified Escalade was conspicuous by its absence. Cadillac has offered a hybrid version in the past, combining a V8 gas engine with a pair of electric motors, and it’s hard to imagine the automaker doesn’t have electrification plans for this new SUV. Even if it’s not a full-EV, some way to capitalize on the economy, quiet, and torque of electric motors seems like an obvious route, and it’s one that Lincoln is eagerly undertaking with its rival luxury trucks.

The other big question is price. Cadillac confirmed to me that it aims to bring in the 2021 Escalade with the same sort of starting price as the outgoing model: that starts at just shy of $76k. That’s for the entry-level Luxury trim, though, and the reality is that it’s when you step up to the Premium Luxury or Sport trims that things get interesting. Pricing for Super Cruise, too, hasn’t been announced.

Automotive journalists are a cynical bunch at the best of times. The temperature of the room at Cadillac’s big unveil, though, was unexpectedly warm toward the big SUV. While opinion may have been divided on the aesthetics, most people I spoke to seemed pretty confidence that the 2021 Escalade brings more than enough to its battle with the latest Navigator.

I don’t doubt that it’ll drive well, and the increase in cabin and cargo space address a significant and valid criticism about the old SUV. If I’ve a lingering concern, though, it’s that Cadillac has discovered to its cost in recent years that having solid product isn’t necessarily enough to translate to sales success. 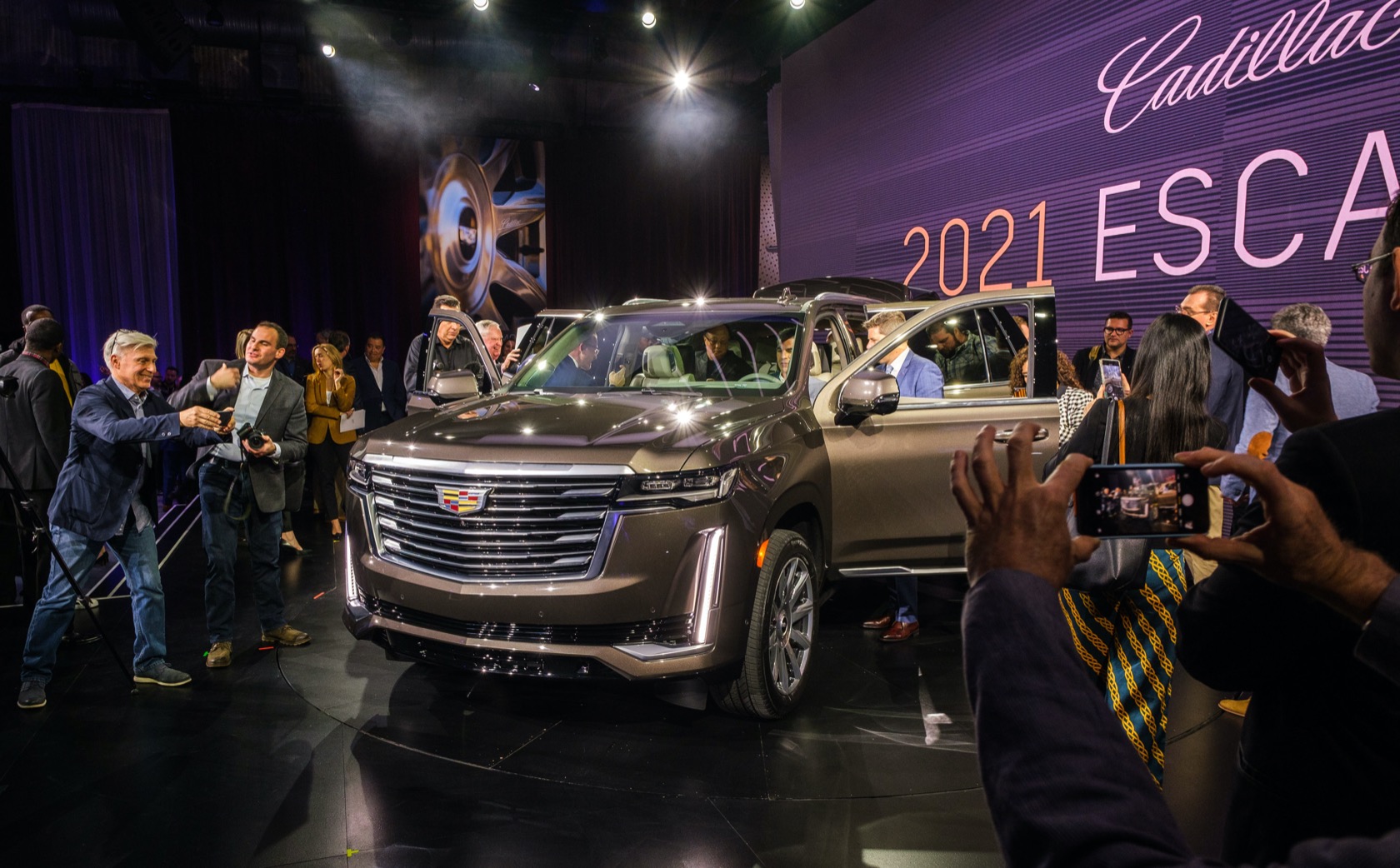 The CT6 is an excellent luxury sedan, handsome and rewarding from behind the wheel, but has struggled to raise its profile in the face of the all-conquering Audi/BMW/Mercedes trifecta. The biggest criticism you could arguably level at it is that, despite Caddy’s claims of bold, American luxe, it simply doesn’t do enough, differently, to be memorable. Cadillac’s recent concept cars have been graceful and demanded your attention; by the time we get to their production offspring, much of that vibrancy has been lost.

The new Escalade could’ve doubled-down on what the old one did so well: refuse to be overshadowed. Instead this 2021 model feels more grown-up and accomplished, but its maturity runs the risk of losing that brash spirit of its predecessors. I don’t doubt the 2021 Escalade will be a better SUV than before, I’m just not sure it’ll be as charming.