The 2020 Land Rover Defender is coming to America

The new Land Rover Defender will be released in the US and Canada, the automaker has confirmed today, giving fans of the iconic SUV something to look forward to – and a reason to be patient. The next-generation Defender won’t be fully revealed until 2019 at the earliest, Land Rover says, but the eagle-eyed might catch a glimpse of one before the covers come off officially.

That’s because it’ll begin North American road testing in January 2019, Land Rover says, albeit wrapped in camouflage. International testing has already been underway, as the all-new model is shaken down, heated up, chilled to extremes, and generally put through its paces to ensure it deserves to bear the Defender badge.

For would-be owners in the US and Canada, the new SUV has been a long time coming. Sales of the Defender ceased back in 1997, with Land Rover launching the so-called NAS Defender in 1993. Meeting local safety requirements involved significant changes from the car available in the UK and elsewhere; however, with new airbag regulations on the books from 1998, the automaker opted to discontinue the car and focus on the Discovery and Range Rover instead.

That’s proved lucrative, but the calls for not only a new, modern Defender but one suited to North American roads have continued nonetheless. What will prove tricky is keeping the aesthetic and ethos of the original SUV, while also bringing it into the modern era. 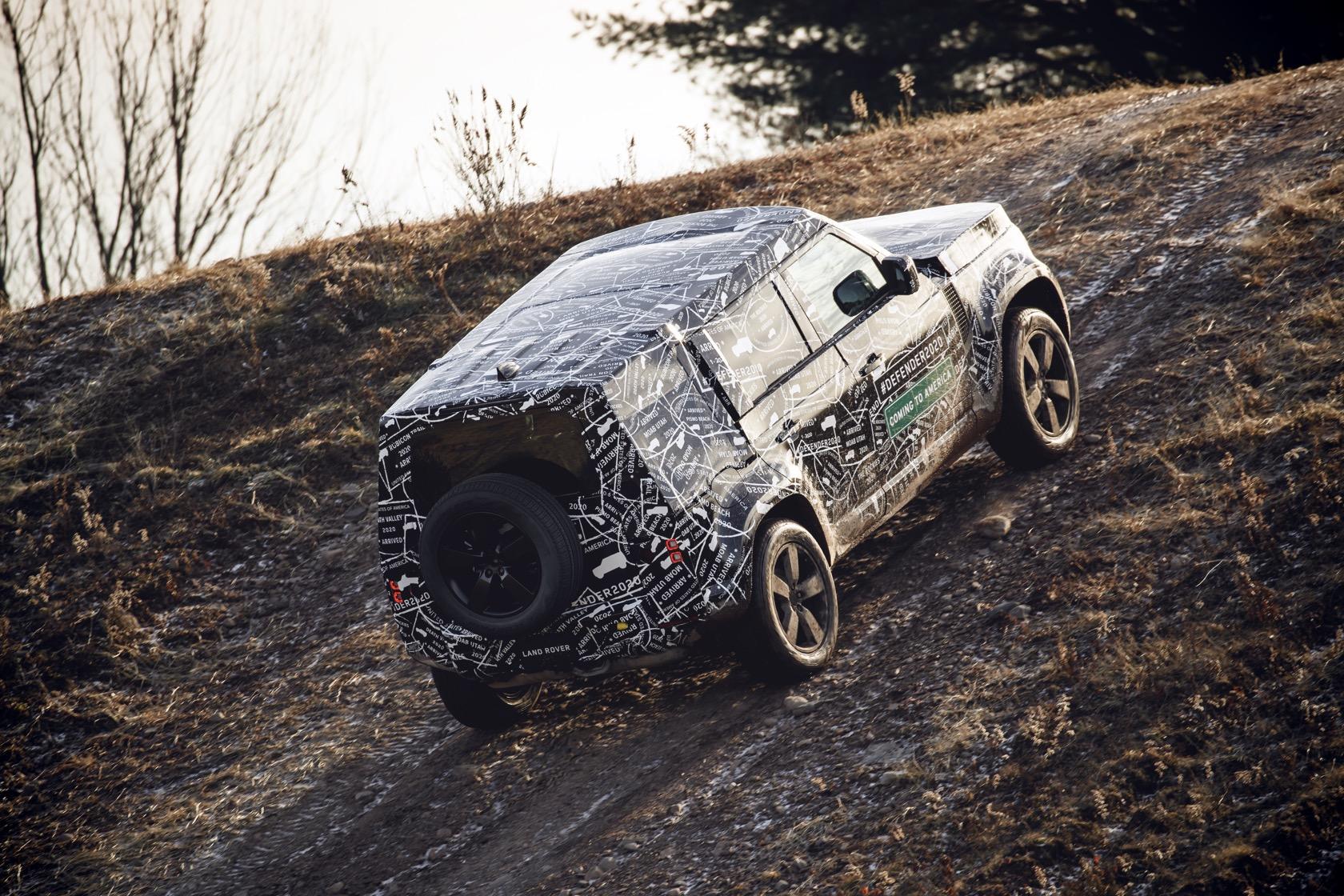 It’s something we’ve seen other automakers face with their own modern takes on much-loved classics. Mercedes-Benz’s much-vaunted update of the G-Class, for example, was forced to tread a narrow line between the design and functionality of the beloved original SUV, yet also satisfy the requirements of luxury and performance that modern drivers expect. Land Rover’s challenge will be no less significant. 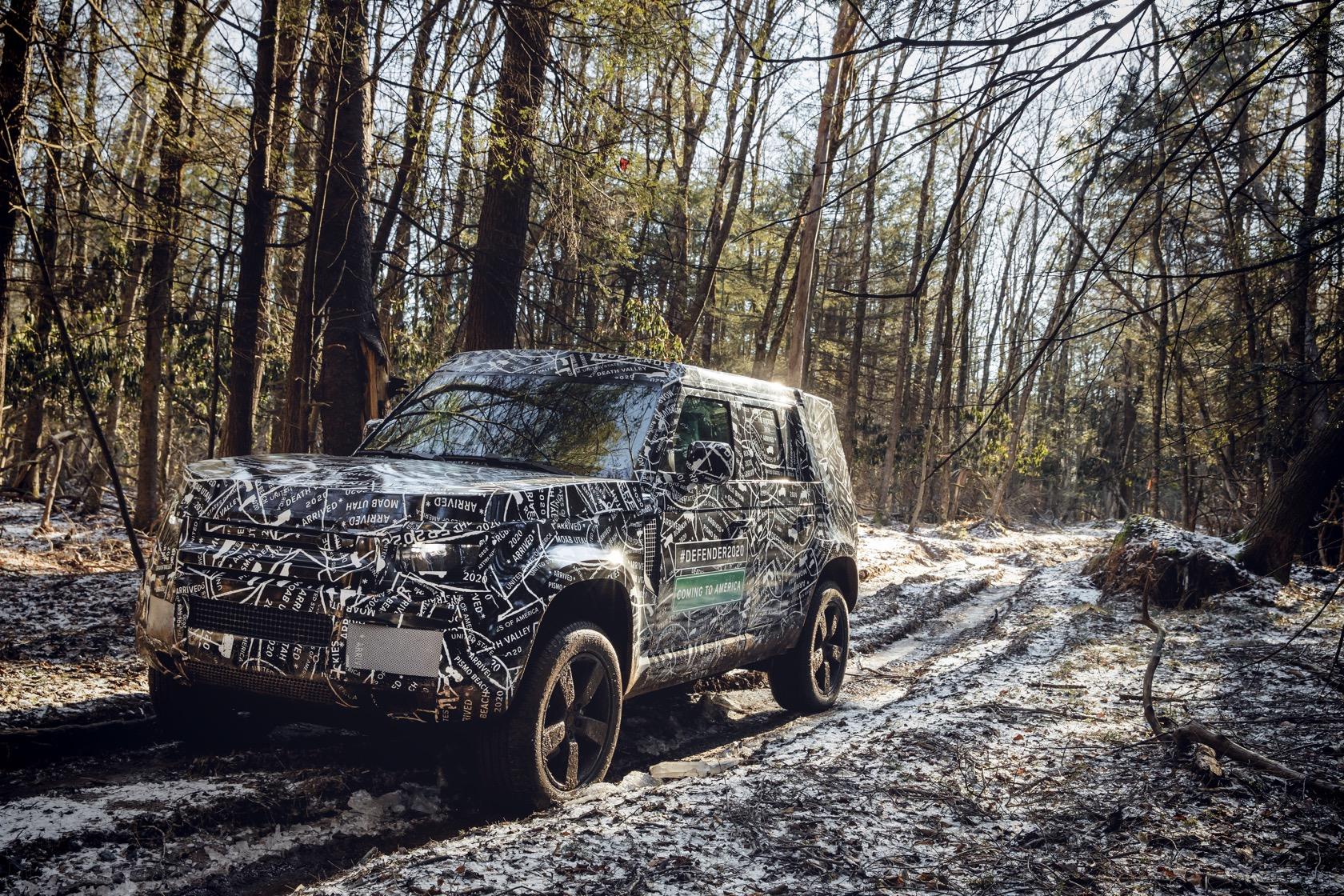 What we do know – beyond these photos of the disguised new Defender – is that it will embrace the modern. The exterior and interior will be all-new, and Land Rover says the SUV will include “the latest driver assistance and connectivity features available.” The goal there is fairly straightforward: not just satisfy the current fans, but give the Defender “broader public appeal” overall. 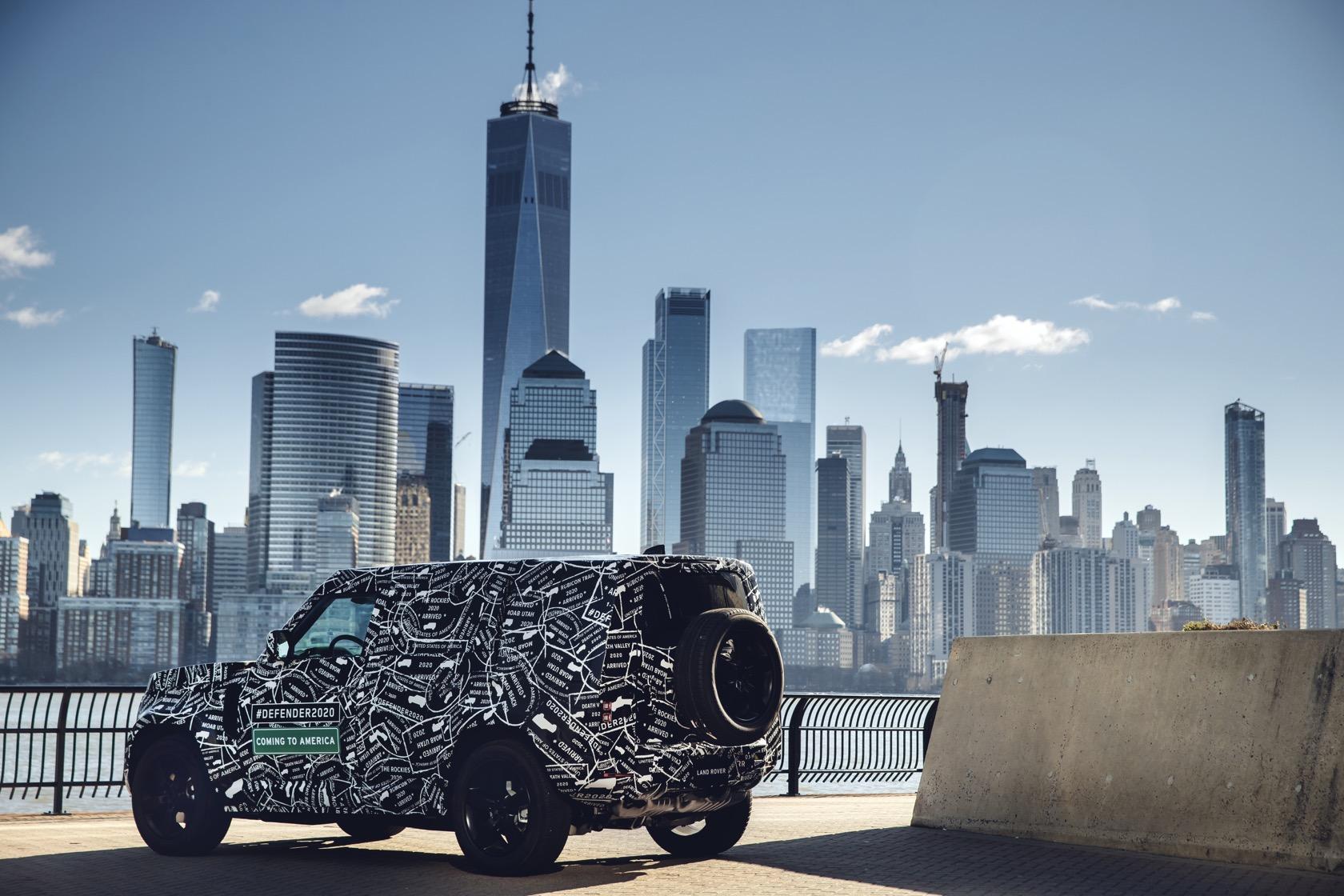 Part of that appeal will involve new drivetrains, and there the Defender will be brought into the 21st Century. Back in 2017, Jaguar Land Rover announced that – from 2020 – every new model line it produced would be electrified in some way. That’s presumably going to include the Defender, too. 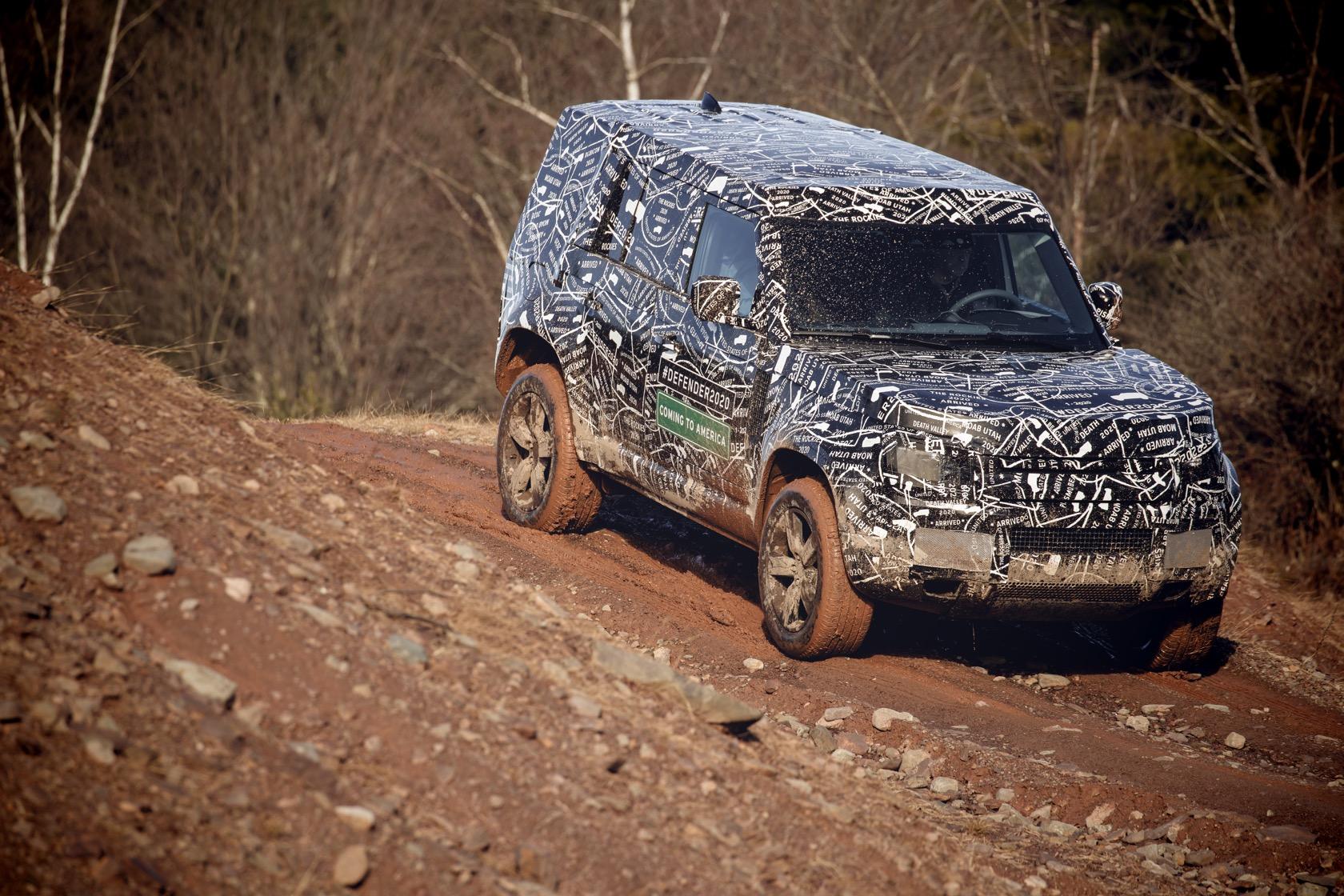 Now, that doesn’t mean that the new truck will be an all-electric SUV like the Jaguar I-PACE. The automaker has left itself some flexibility when it comes to how that electrification is implemented, ranging from pure EV at one end, through plug-in hybrids, to mild hybrids at the other extreme. Exactly which it will use will depend on the core model itself, how it’s expected to be driven, and what advantages electrification will actually bring. 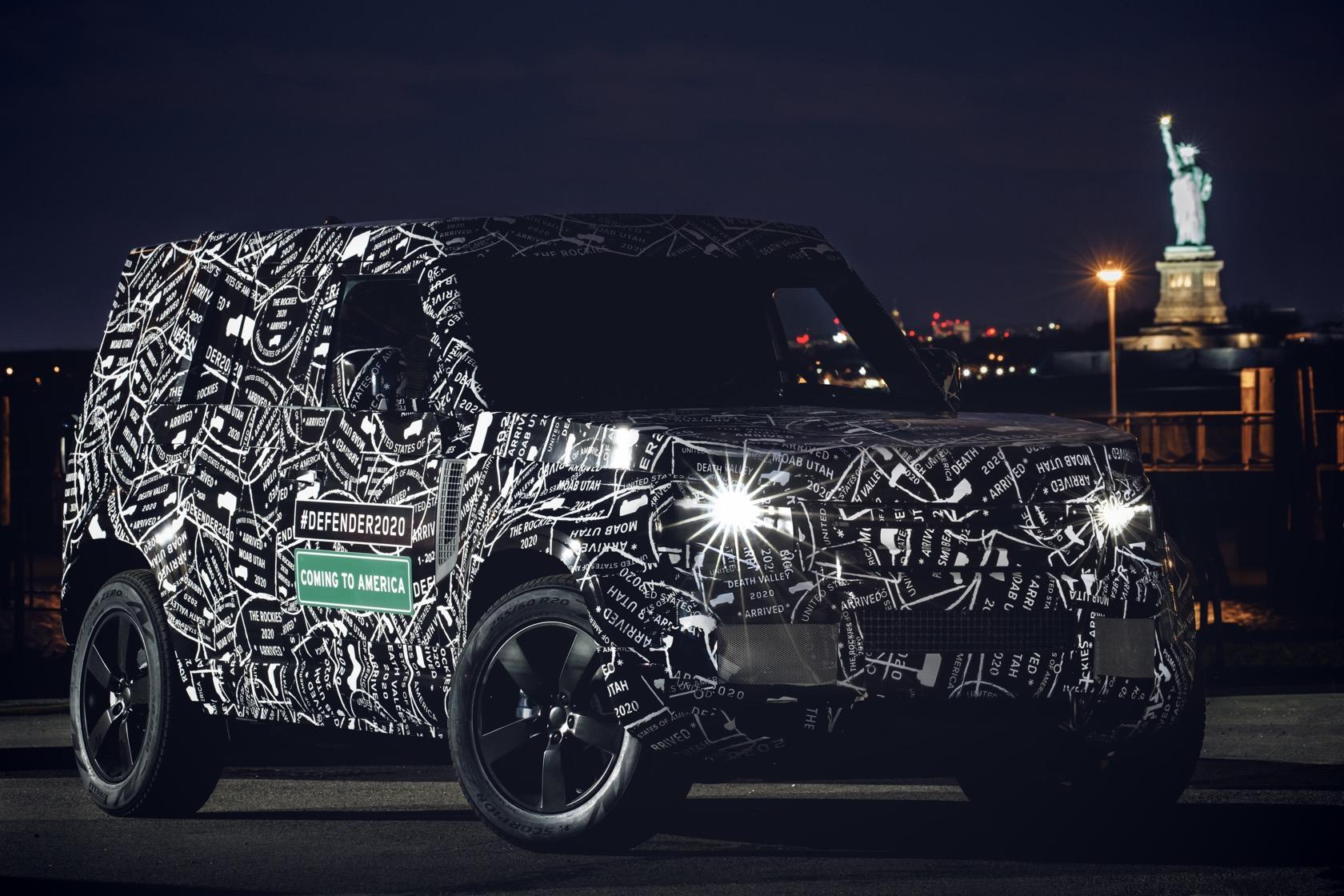 If we were to guess, then, we might expect to see a mild hybrid or a plug-in hybrid Defender join the range. The current Discovery P400e Hybrid, as an example, combines a 2.0-liter four-cylinder gas engine with an electric motor, for a total of 398 horsepower and up to 31 miles of EV-only range. The automaker uses the same technology in the 2019 Range Rover P400e, too.

The full reveal of the all-new Defender will take place sometime in 2019, the automaker promise. As for sales, they’ll kick off in the US and Canada come 2020.