Sunset Overdrive Review: The Awesome-pocalypse is opon us

Over the past week and a half we’ve been playing Sunset Overdrive, a game exclusive to Xbox One and entirely unique in its look, gameplay, and next-level splattering of pop culture references. Sunset Overdrive places you in the customizable body of an apocalypse survivor. But this isn’t any normal apocalypse. As one NPCs suggests, this is the Awesome-pocalypse. This game isn’t about getting harangued for shooting your opponent incorrectly or for falling off a building too many times in a row. It’s about having FUN.

Here’s how it starts. An energy drink company called Fizzco is so extremely popular that they’re able to shut down and control an entire city. Think Brawndo from Idiocracy. They’ve trapped you and some other humans in this city with a bunch of mutants that they may or may not have inadvertently created with their newest drink, OverDrive Delirium XT. 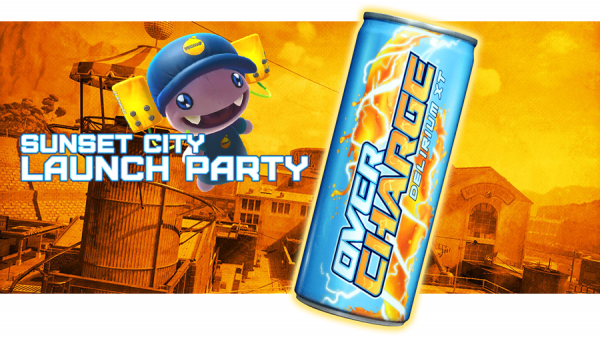 The conversion of humans to mutants happens very quickly. Below you’ll see the first gameplay sequence in which you, a garbage collector for Fizzco, have discovered that their drink is turning everyone to mutants.

You’re racing home as fast as possible because you’re freaking out and don’t know what else to do.

Good luck with that!

This game is as much about grinding as it is about shooting. You’ll need to have your wits about you, and you’ll have to be OK with being able to launch an exploding teddy bear at your enemies instead of accomplishing the coveted headshot each and every kill.

Watch this first training sequence to see what I mean:

Notice how I didn’t have to come anywhere near the enemy to take the lot of them out. All I had to do was bounce on a trash bin and launch vinyl records at them en masse. 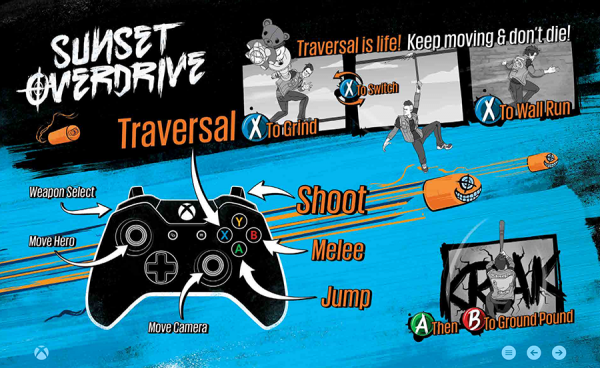 This game makes you want more weapons, and a wider variety of weapons as you progress. The weapons you use in this game are unbalanced – you need to use different weapons for different kinds of enemies, and the whole lot is wildly entertaining. 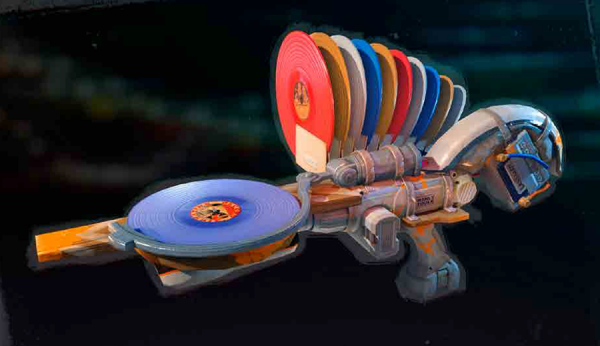 Everything from a “Flaming Compensator” shotgun to spiked hammer. An energy rifle, a gun that fires wrench boomerangs, and a mission which allows you to fire toy puppies which your companion (we won’t spoil the surprise) is more than willing to kill to get back.

This game is about grinding, bouncing, wall-running, jumping, and generally staying off the ground. Remember how important it was/is to stay off the ground in Titanfall? It’s far more important in this game. Watch this grinding sequence to see how you’ll be getting around in this game:

One loading screen “tip” suggests the following about traversing the landscape: “Wondering where the Sprint button is? It’s called grinding.” 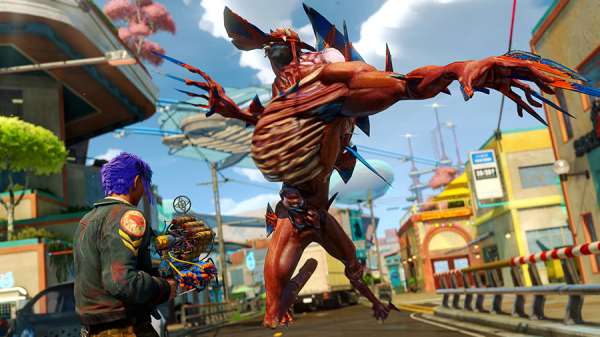 Try to stick to the ground and fire your weapons as much as you can, as accurately as you can. You will die.

While my first experience with this game made me feel like I’d be living an amped-up version of Tony Hawk Pro Skater with guns and zombies, I’ve changed a tune. This isn’t that.

Instead, you’re Spider-Man. I wouldn’t be surprised if Insomniac Games were tapped to make the next Spider-Man game – they’d make a killer go at it, that’s for certain. It suggested that your powers are given to you with “Amps” created by this fellow who’s super skilled at mixing together chemicals from the energy drinks that caused the apocalypse. We know better. You were bitten by a radioactive spider and no-one thought to mention it. 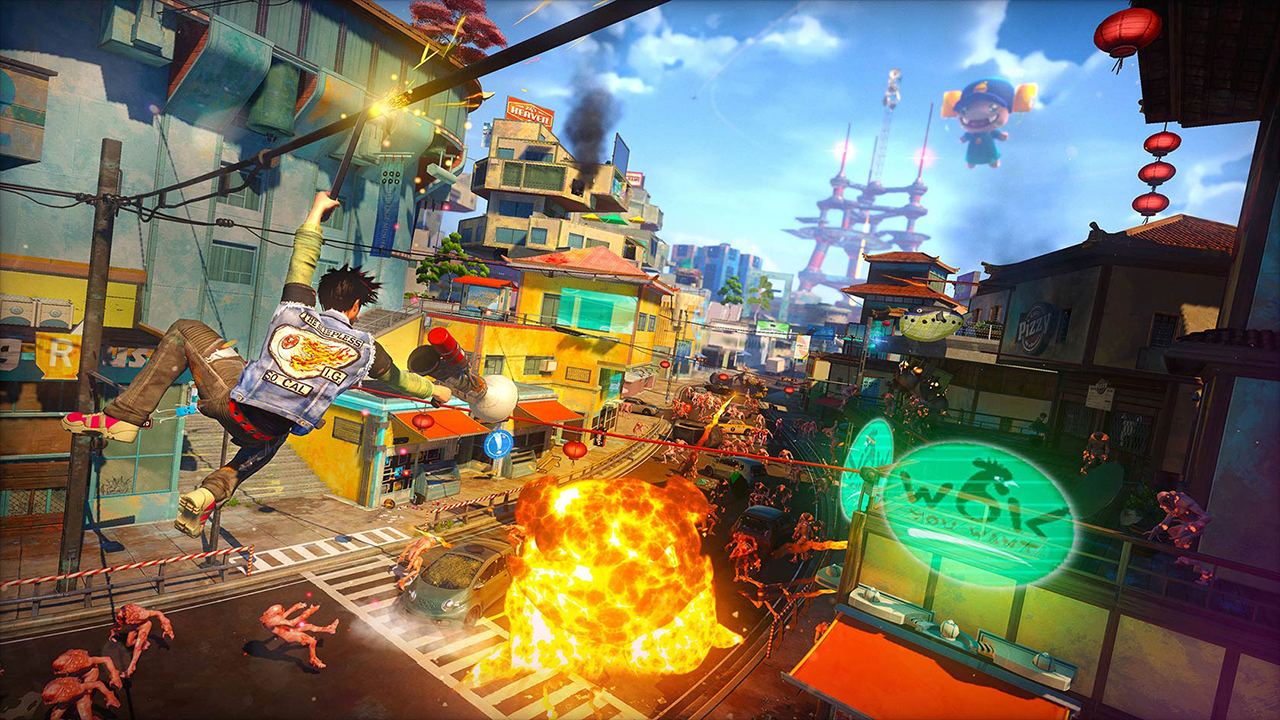 Instead, this game is about giving you as much free reign over the outsides of buildings as any game we’ve yet played – except maybe Assassin’s Creed: Unity. You’ll move up, over, around, and under buildings in as entertaining a manner as possible. 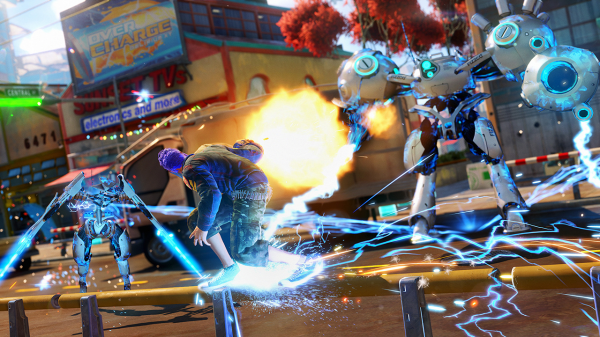 Instead, this game is about fighting mutants. Many oddly shaped mutants that are nothing like the zombie enemies we’ve experienced in the past. There are humans, too – “Scabs” they’re called in this game. There are some surprise enemies as well – and they’re all out to get one another just as much as they are out to get you.

Several missions have you turning your enemies against one another – chaos ensues. Multiplayer plays on this as well.

As it is with most games that include multiplayer that allow us an early review, we’ll be waiting a little while until more players arrive online to decide how this process will scale. For now, multiplayer seems close enough to regular gameplay that we’re expecting it to be more than worthy of the rest of the game.

I have a full-time job and 3-year-old at home, so I don’t have a whole lot of time to play video games outside of what I do for SlashGear. Since I was given a review copy of Sunset Overdrive, I’ve played nothing but Sunset Overdrive. 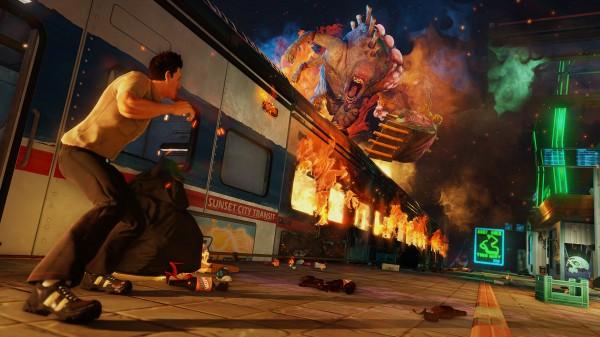 After I’d seen enough to start and finish this review, I continued to play Sunset Overdrive. This isn’t the first game that this has happened to me with – I’m still playing Watch Dogs, after all – but I can’t see myself letting this one go. The interest I have for the characters, plot, and gameplay in this game reminds me of how addicted I am to LEGO bricks or Star Wars.

It’s serious business. The folks at Insomniac Games responsible for creating a depth to this game have done those that’ve created the gameplay a great credit. Some games are good at one or the other – this game is solid the whole way through. 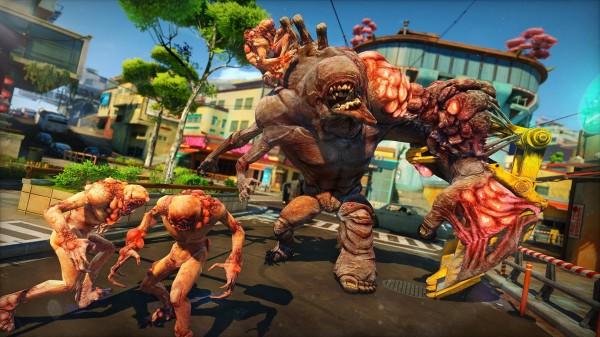 Who Will Hate it:

If you love the challenge of a very difficult game, the victory that comes with beating a game that few survived, if you consider yourself a “hardcore gamer”, you may just hate it. This game is extremely bright, splattered with color, and may not be your style if you’re a conservative dresser. If you’d never consider wearing a t-shirt with the color orange on it, you may not like this game.

Who Will Love it:

If you want to play the game, experience the game, and not worry about being frustrated when you can’t accomplish a certain task or goal, this is certainly a game for you. Take for example the respawn process: checkpoints are everywhere, and you don’t have a certain number of lives before you have to start all the way over.

There’s a mission early on in the game where you’re moving back and forth between two tall apartment buildings, grinding on lines ever upward. Even if you fall to your death, you’ll be saved at a checkpoint not too far below where you fell. There’s no point at which you have to start back at the bottom.

Respawns are fun, too – have a peek at what happens when you die and come back from the dead. There’s no shame in being dropped off with a pile of trash by an alien craft that didn’t want you. It’s just a part of the whole Sunset Overdrive respawn process.

This game is crazy. It’s insane, it’s full of itself, and it’s very, very loud. Visually and spiritually loud.

Sunset Overdrive will be released on October 27th, 2014 on Xbox One. It’ll cost you $59.99 unless you pick it up in its official Xbox One / Sunset Overdrive bundle. If you don’t yet have an Xbox One or are planning on picking one up for a friend, colleague, or family member, buy the bundle – the game is a hoot and a half and the perfect game for Christmas Day. Especially if you’re all about that Holiday Bundle price chop.

This game gets a big YES from SlashGear. You should grab it, you should play it, you’ll enjoy it.