We’re just a little over one month away from the full release of Assassin’s Creed: Unity, and we’ve had our first opportunity to get an up-close and personal view of the game in all its glory. Our demonstration was done on an Xbox One and we’ve seen single-player, 2-player co-op, and 4-player co-op. In this game Ubisoft presents Assassin’s Creed rebuilt, enhancing the bits we liked about previous generations and cutting out the fluff.

Before you dive in, check this rundown presented by Game Director Alex Amancio. This is the same guy who you might have heard narrating more than one Assassin’s Creed preview video in the past – he nutshells the whole game’s next-gen elements inside 3 minutes.

What you see here is what we get. The chair, the TV, and the Xbox One. A pair of over-ear headphones and some donuts. We jump in on the game already equipped with weapons and some skills, allowing a more natural view of how the game will play than we’d get starting from scratch. 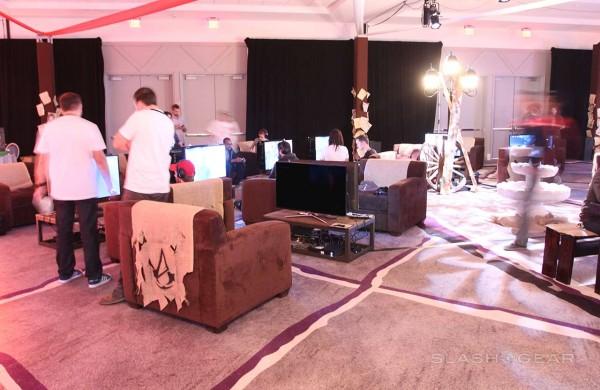 Given hours to play the game, I made an effort to explore before I started stabbing away at missions. Every once in a while we’d be tapped on the shoulder, asked to come play a multiplayer mission set up with a set of 2 or 4 Xbox One units together – otherwise it was unhindered straight gameplay for an extended period of time.

This game aims at stealth – far more than Black Flag, anyway. You’re encouraged to fight when you have no choice, but doing so is deadly. A stab through the heart kills you – surprise!

Unity escapes the 3rd-person legacy of Hack And Slash. You’re crossing swords with your opponent, not just cutting, getting cut, and cutting again. Parry, dodge, roll, and create a style that’ll defeat your opponent with skill, not just force.

You’ll also have the option to use a variety of bludgeoning weapons like warhammers and the spiked mace. Time for some skull-crushing. And some variety in hand-to-hand combat.

Your skills in scaling buildings have been modified and enhanced in Unity, now with new Free-Run Up and Free-Run Down to run up a building, run diagonally upward along the side of a building, or begin climbing and jumping upward. Jumping down includes more risk – no longer are you so restricted by the Leap of Faith.

Again – you can die. You will die. One fabulous example of the fabulous fashions in which you can die during building-scaling is the Wall Eject. I climbed the side of Notre Dame – which, Ubisoft will have you know, is reproduced to scale 1:1 – and moved to the front facade. One Ubisoft developer (I can’t remember which) gave a gasp when I held RT and pressed X – that initiates the Wall Eject, an extremely unforgiving sort of move, especially when there’s no safe place to land.

It’s not just Notre Dame that’s reproduced to lifelike proportions, it’s the entire city of Paris. While this Paris is not 100% exactly the same as it was on the Eve of the French Revolution in 1789, it’s very close. Ubisoft suggests that 1 out of every 4 buildings on this one, single map are open. For some that just means you can run through a window, down a hallway, and through another window, but still – they’re open.

Ubisoft also suggests that this map – Paris – is larger than all of the land mass in Black Flag. That’s massive. To encourage you to explore the whole of it, Paris Stories, treasure, and a variety of oddities will only be revealed when your character moves inside of the areas where they lie. Fan-made map guides will arrive eventually, but for now, Ubisoft will be the sole keeper of the secrets.

My demo of 2-player Co-Op included finding and stealing an object, assassinating several key enemies, and finding an ally on the run. While you’d think it would be difficult to keep track of your partner while you attempt to take to your goal – especially since you’re running through 3D space, not just on the ground – it’s really enjoyable.

The difference between multiplayer here and all other multiplayer games is its mix of mission development and hunting. We’re expecting Evolve to have a similar feel – you need to work with your team to attain your goals, keeping track of your team as you keep track of your enemies. Protecting your team is as important as capturing goal items and killing enemies.

We experienced little to no lag in connectivity, of course – not surprising since we were in the same room. We’ll leave final judgement for that bit of the party for real live online play.

While you’d expect 2-player and 4-player co-op to be the same – they really, really are not. The demonstration I took part in had me and three other players on a heist of an art museum.

Each time you and your team select this mission, you’ll get a random setup. There are several paintings you’ll have marked, and only one of them is the correct one, your true goal. The rest are worthless fakes. You’ll have to guess which one is best to head for first, and if you’re wrong, head to the next one and so on – all without being killed.

This game is not 100% historically accurate, but it’s edging on “may as well be accurate,” it’s so close. There’s a mobile app that includes information on all the key elements – all entirely true. The key buildings on the map are all entirely correctly placed and sized.

Your storyline – the assassins, etcetera – is not true, so far as we know. Ubisoft warns that no matter how accurate they are in the game, there’s still dramatic elements added to drive the storyline. Outside of these, Assassin’s Creed: Unity presents itself as an awesome step toward the ultimate game in “living history.”

Black Flag was the last of the last generation. Assassin’s Creed: Unity is the first in the series to be launched entirely and exclusively on next-generation consoles – that means Xbox One, PlayStation 4, and PC. Our demonstration was done on Xbox One, and it showed lots of potential. Nothing that can’t be perfected in the final build of the game, and certainly enough to make us super excited about the PC release.

Assassin’s Creed: Unity will be released on November 11th, 2014 in the United States on Xbox One, PlayStation 4, and PC. We’ll have a full review soon – stay tuned!