For Star Wars, live motion capture is the future

Today we’re taking a peek at how Star Wars is being made. The creation process, you’ll find, isn’t all that different from how video games are made. Video games like Star Wars 1313. Even though J.J. Abrams has assured the public time and time again that practical effects are king in Star Wars: The Force Awakens, we’ve got reason to believe that this doesn’t necessarily mean that everything is as it seems –here we’ll also be explaining why that’s not necessarily a bad thing.

Back this March, we attended a conference called GTC – this is a graphics conference hosted by NVIDIA, a company that makes graphics processors (amongst other things). At this conference, NVIDIA CEO Jen-Hsun Huang made clear that Lucasfilm was using NVIDIA technology to make the next Star Wars movie.

“I’ll create any technology that helps them make Star Wars faster,” joked Huang at the conference. 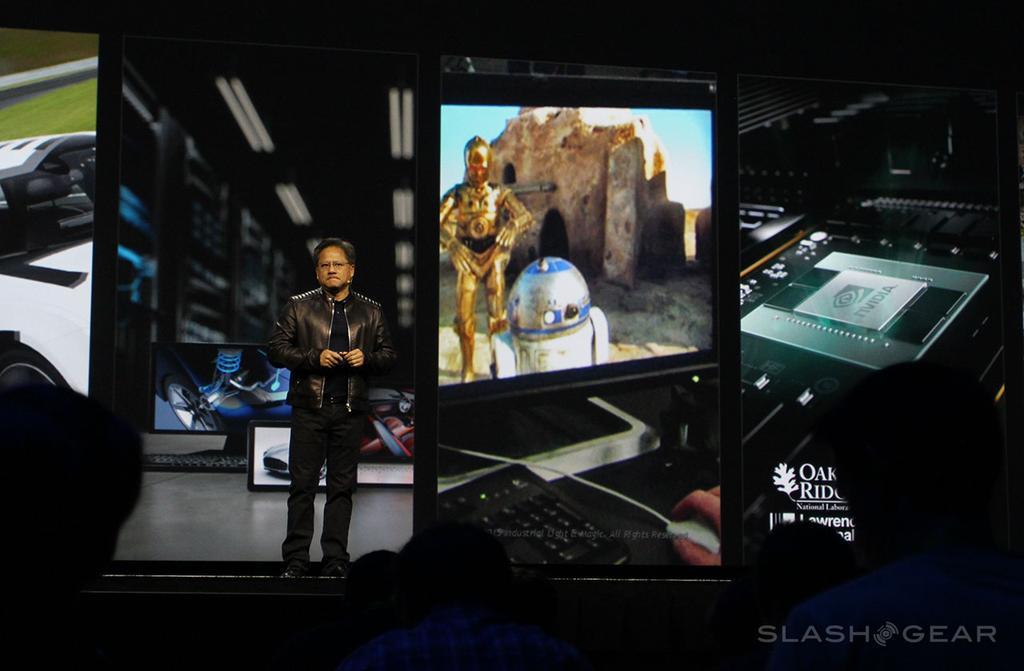 Onstage, Huang stood in front of a slide which showed R2-D2 and C-3P0 on a desert environment that looked quite similar to what we thought at the time was Tatooine.

It was revealed to us at that time by an official at Industrial Light and Magic that “The R2/3PO image is not from any Star Wars film, it was simply a test.”

We later discovered that this test originated at BAFTA 2013. Via the Inquirer, we learned that Lucasfilm chief technology strategy officer Kim Libreri spoke about how “developments in computer graphics have meant Lucasfilm has been able to transfer its techniques to film-making, shifting video game assets into movie production.”

This is real-time motion capture working with graphics engine technology sourced from Lucasarts.

Lucasfilm and Industrial Light and Magic worked together to “heavily modify” what Lucasfilm was using at the time (pre-2013) as a gaming engine. Together they tested live motion capture and this gaming engine “in the development of a series of prototypes” which were used to demonstration the tech.

The first demonstration was a short film “created in eight weeks.” At that point, again according to Lee Bell at the Inquirer, some production occurred on Star Wars 1313:

“After the prototype movie, Lucasfilm and ILM worked on a Lucasarts Star Wars video game project called 1313, which was shown off at the E3 gaming conference in 2012. The game was in development for around two years using Nvidia gaming hardware, before it was cancelled when Lucasarts was shut down by Disney in April this year.

However, 1313 has been used by Lucasfilm to demonstrate real-time motion capture, giving it the confidence to believe that video games engines could be used in movies and could one day replace the post-production process.”

Below you’ll see a single frame from a gameplay trailer made by Lucasarts to show off Star Wars 1313 before it was cancelled.

You hear that? That’s the sound of a thousand fingers crossing all at once, as if something awesome is about to happen.

To be clear, the video you’re seeing here does not show Star Wars: The Force Awakens. Instead, it shows what Lucasfilm called their “performance capture stage”, “driving the game engine for 1313,” according to Bell.

Fast forward to 2015, and we’re experiencing Star Wars Celebration 2015 and the second teaser trailer for Star Wars: The Force Awakens.

Have a peek at our Star Wars Teaser Trailer 2 analysis as well.

Onstage on the second day of Star Wars Celebration with the crew of Star Wars Battlefront was Doug Chiang. Chiang was the visual effects production designer and design director (with Industrial Light and Magic) in 1999 for The Phantom Menace, design director and concept design supervisor for Attack of the Clones, and is now working on the new Star Wars films.

Chiang is a concept artist on Star Wars: The Force Awakens and worked directly with the crew at DICE while creating Star Wars Battlefront.

Above you’ll see a scene from the first trailer for Star Wars Battlefront.

Below you’ll see a scene from the 2nd teaser trailer for Star Wars: The Force Awakens.

“For me, working with a film crew, you get to work with some of the best top talent in the world,” said Chiang, “and working with DICE, I mean, it was exactly the same thing.”

“You know, the two mediums are so close now, and I just totally admire the team at DICE because they are at the same caliber. I mean – this could be a feature film. *gestures at screen where the Battlefront trailer has been shown*”

The game Star Wars Battlefront will actually have a tie-in with the film series beyond the basic subject matter. A DLC for the game called “The Battle of Jakku” will take place immediately following the Battle of Endor as seen in Return of the Jedi.

This battle will be amidst the planet of Jakku, and the aftermath will be visible 30 years later in the same location as this battle in Star Wars The Force Awakens.

Have a peek at our feature article The Battle of Jakku: canon Star Wars plot post-Jedi revealed.

Now we’ve got several months between now and the premiere of Star Wars: The Force Awakens. Will we see a gratuitous amount of special effects when the time comes?

Instead, expect nothing but the most realistic looking “Used Future” galaxy you’ve ever seen, with graphic effects so spectacular, you won’t even know they’re there.