Galaxy Note 20 Ultra hands-on: You can preorder, but you shouldn’t

Samsung has a new flagship, though the Galaxy Note 20 Ultra has the feel of something pretty familiar. Largest of the company’s phones with its 6.9-inch Super AMOLED display, the S Pen enabled handset doesn’t stray too far from last year’s Note 10, only pausing to dip liberally into the aesthetic of the Galaxy S20 Ultra released earlier in 2020.

That is, thankfully, no bad thing unless you wanted revolution not evolution. You’d have been out of luck there generally with the Note line-up anyway; the past few iterations of Samsung’s Android workhorse have been about refinement, it’s fair to say. 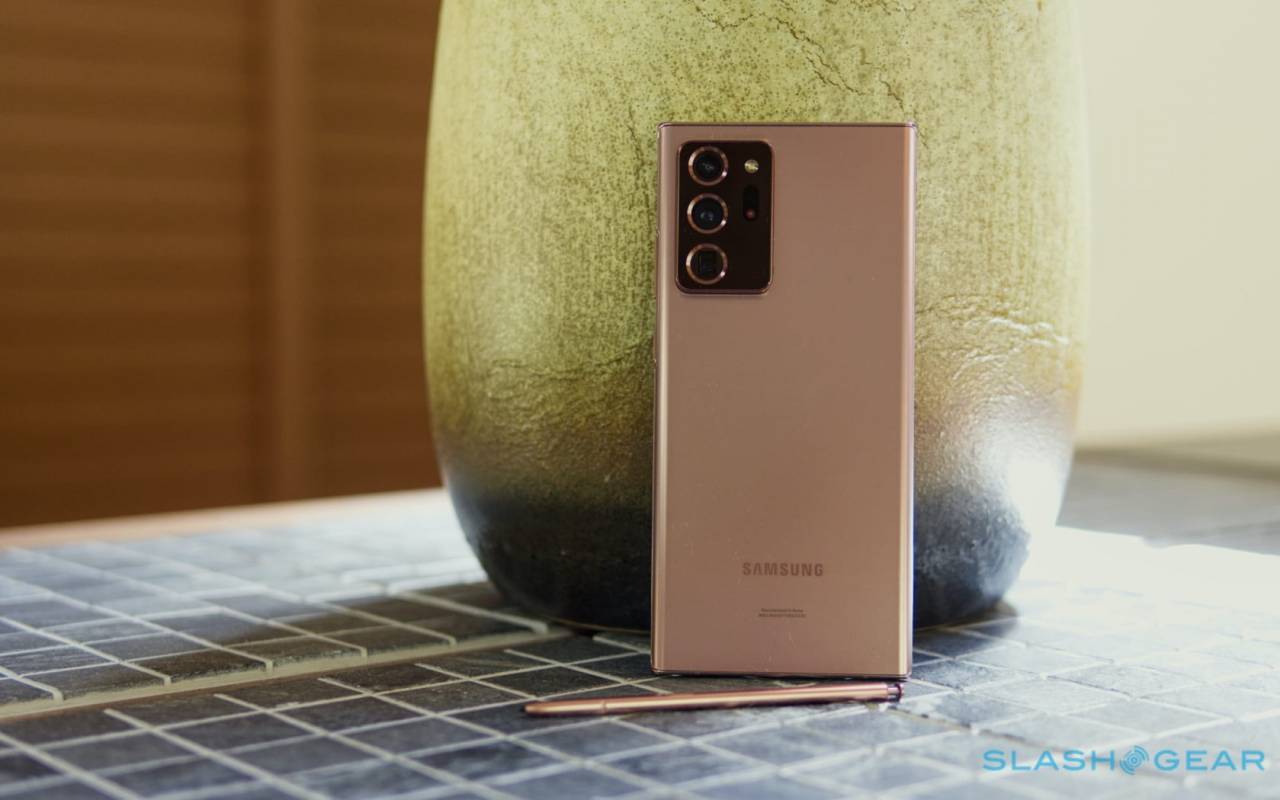 With its $1.3k+ price tag, it’s also fair to have high expectations for the Note 20 Ultra. I’ll put aside the wisdom of Samsung opting for a plastic back on the $999.99 Note 20 until I’ve had a chance to play with it myself, but its full-spec’d sibling has no such compromises. Though the Mystic Bronze color looks a lot more pink than you might expect, the frosted finish to the rear glass works nicely against the highly polished metal frame.

Samsung’s attention to detail has come on leaps and bounds over the past few years, which is a good thing considering how in-your-face the Note 20 Ultra’s camera bulge is. I can understand the urge to accommodate a fancy periscope zoom – which folds the optics across the Note to manage its 5x optical magnification – but the resulting protrusion is no mere bump. It looks unwieldy, but more annoying still is how it leaves the Note 20 Ultra rocking as you use it on a table. 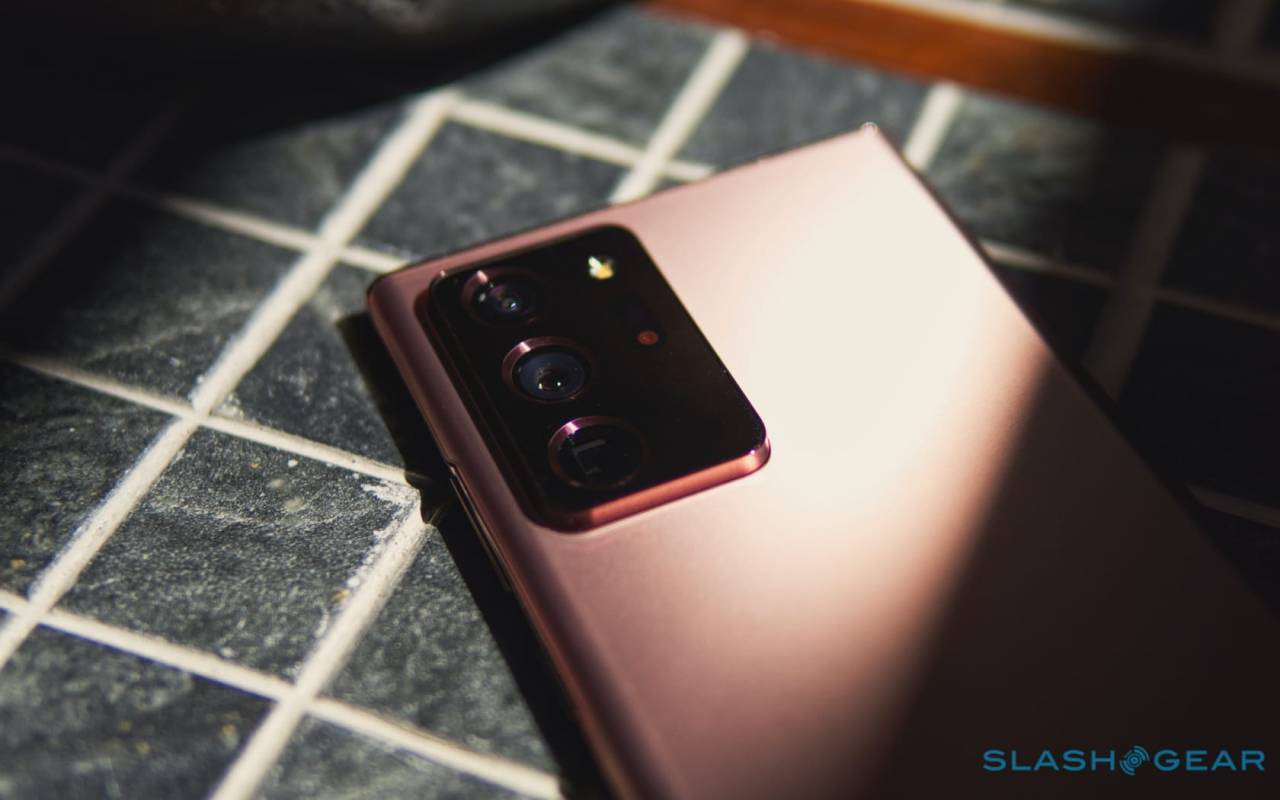 That’s all the more frustrating when you go to use the S Pen. Samsung’s stylus supports the same 4,096 levels of pressure, but some refresh magic – including AI prediction of where you’re likely to swipe the nib next – leaves it feeling that little bit more fluid to write or sketch with. It’s truly a lovely sensation, up until the point where the Note tips to the side on the desk because of that accursed camera barnacle.

Pick it up, meanwhile, and it’s a reminder that those with small hands might want to look elsewhere. The 6.9-inch screen may be pushed to the edges as best Samsung’s engineers can, but it still leaves the Note 20 Ultra at 164.8 x 77.2 x 8.1 mm. The downside to the premium construction is a 208 gram weight, too. Yes, that’s a little under the iPhone 11 Pro Max (at 226 grams) but then again it’s hardly like anybody said Apple’s phone was lightweight either. 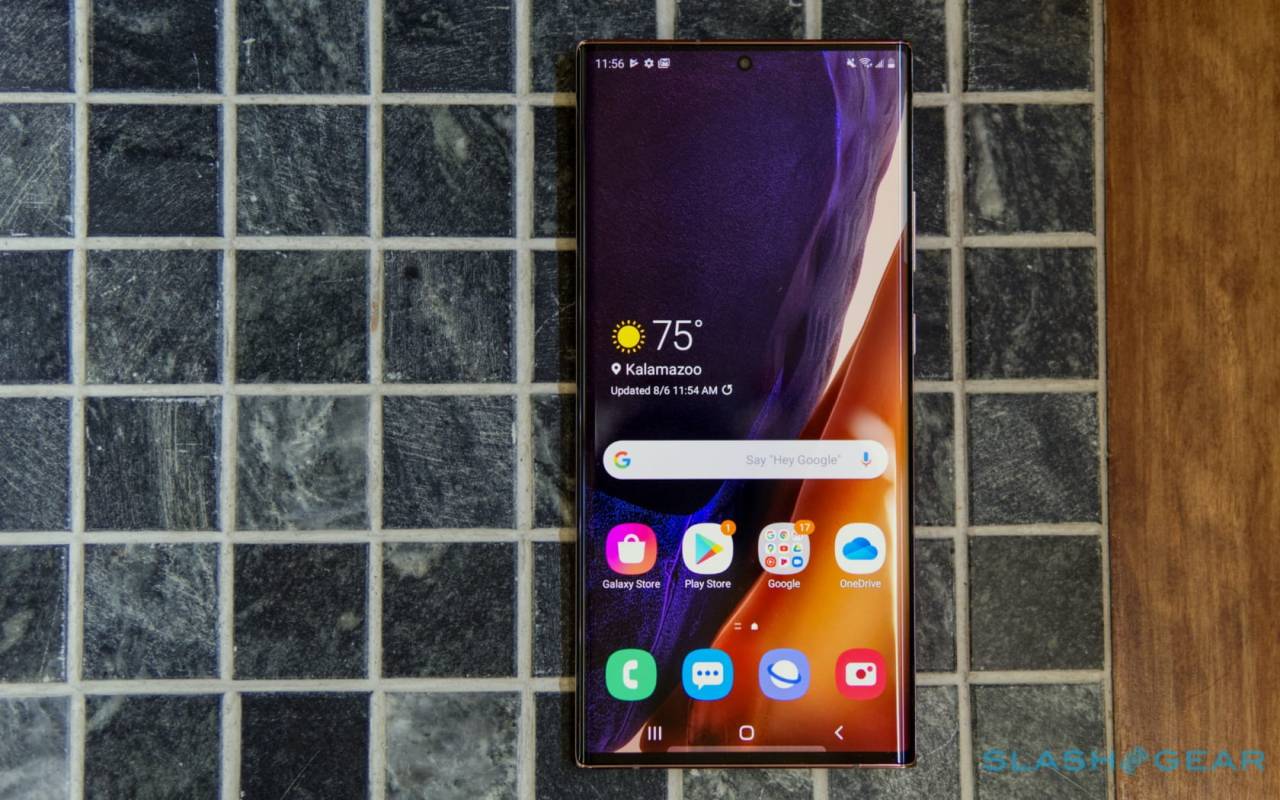 All that gets easier to stomach when you actually see the display, however. Its WQHD+ resolution is detailed and its AMOLED tech is bright and color-rich. A 120Hz refresh rate – which can automatically ramp down when such rapid speeds are required, to save on power – leaves it silky-smooth in scrolling. Samsung’s Infinity-O hole-punch camera is small and easily overlooked.

Pull out the S Pen from its silo – moved, for 2020, from the right to the left side – and you get new Air Actions that allow you to control more of the phone wirelessly. You can navigate through a PowerPoint using just wand-like swipes, for example. It has the potential to be useful, but with DeX having gone wireless there’s arguably more chance you’ll be holding the Note 20 Ultra in your hand anyway, even when presenting to a remote screen. 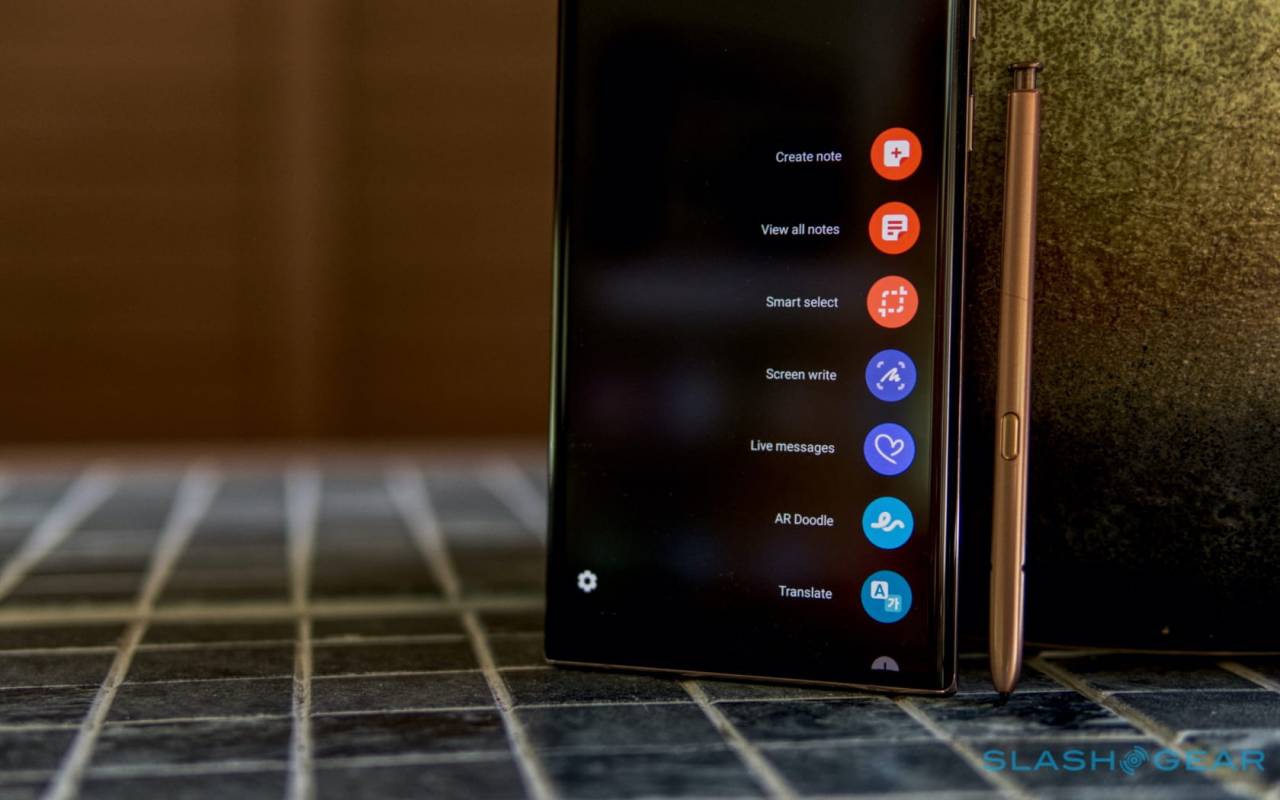 As for power, it’s early days with the phone – and my full review will have to wait for now – but the combination of Snapdragon 865+ and 12GB of RAM doesn’t exactly leave me concerned the new Note will be lacking in grunt. You get a 4,500 mAh battery with fast wired and wireless charging, too, plus 5G, WiFi 6, Bluetooth 5.1, and Ultra Wideband which will be useful for Android Nearby Share when UWB is more common.

All in all, the Note 20 Ultra is shaping up to be just what we’ve come to expect from the Note series. Power, form that follows function, and a beautiful Samsung display on top of it all. Camera performance and the rest will have to wait until the full review too, but Samsung’s decision to cherry-pick sensors from the well-reviewed Galaxy S20 Ultra seems like a sensible one.

Preorders are open, but the wise shopper waits 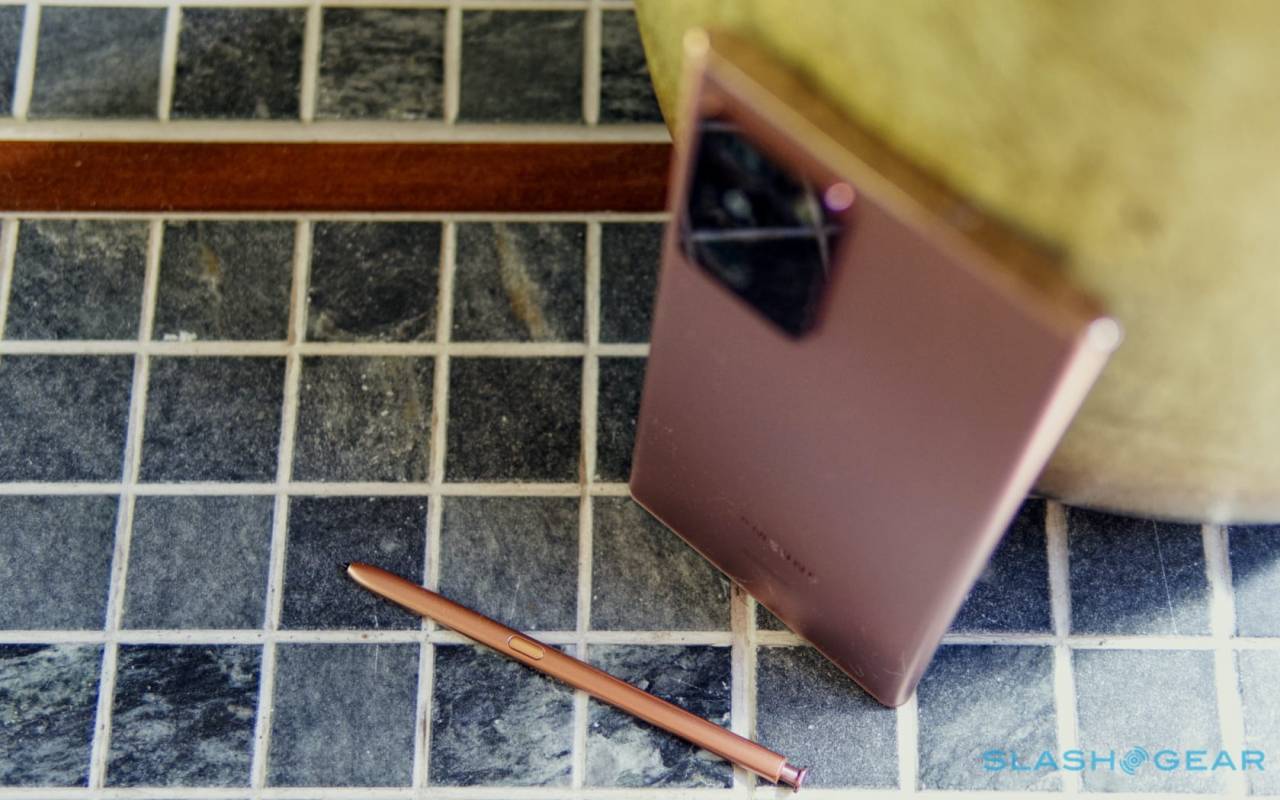 Carriers, too, are in on the preorder action. All have payment plan options – ranging from 24 months on Verizon and T-Mobile, to 30 months on AT&T – and trade-in deals, if you want to get rid of your old handset. 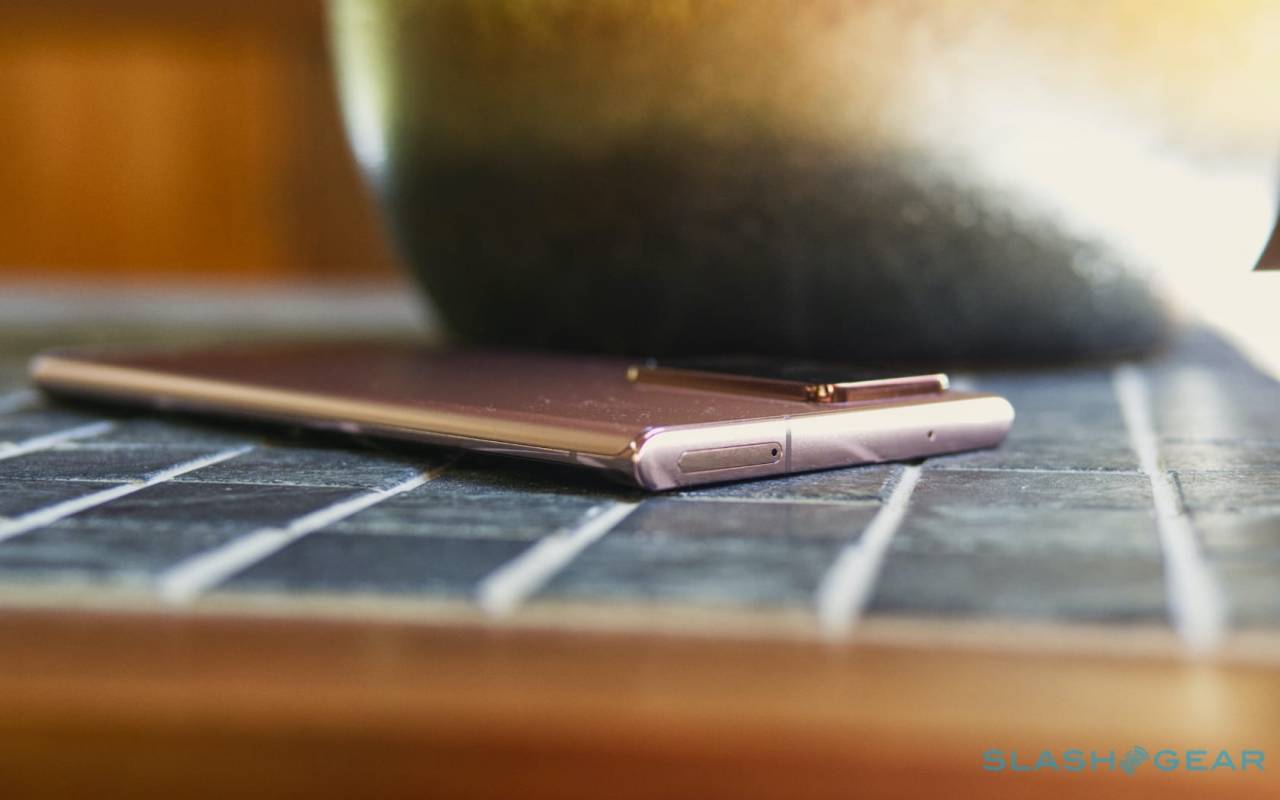 There’s a lot to like about the Galaxy Note 20 Ultra. All the same, I think you should probably hold off from preordering it. Yes, Samsung has some promotions to sweeten the deal, but if previous launches are anything to go by there could be better still to come.

Samsung and the carriers are hungry for sales, and they’re not afraid to leave preorder fans feeling a little burnt in the hunt for them. As we saw with the Galaxy S20 launch earlier in the year, the time between the phones hitting shelves and the price getting sizable cuts is narrowing considerably. Indeed it was only a few weeks after the S20 family went on sale before we were seeing retailers knock $200+ off the sticker price. 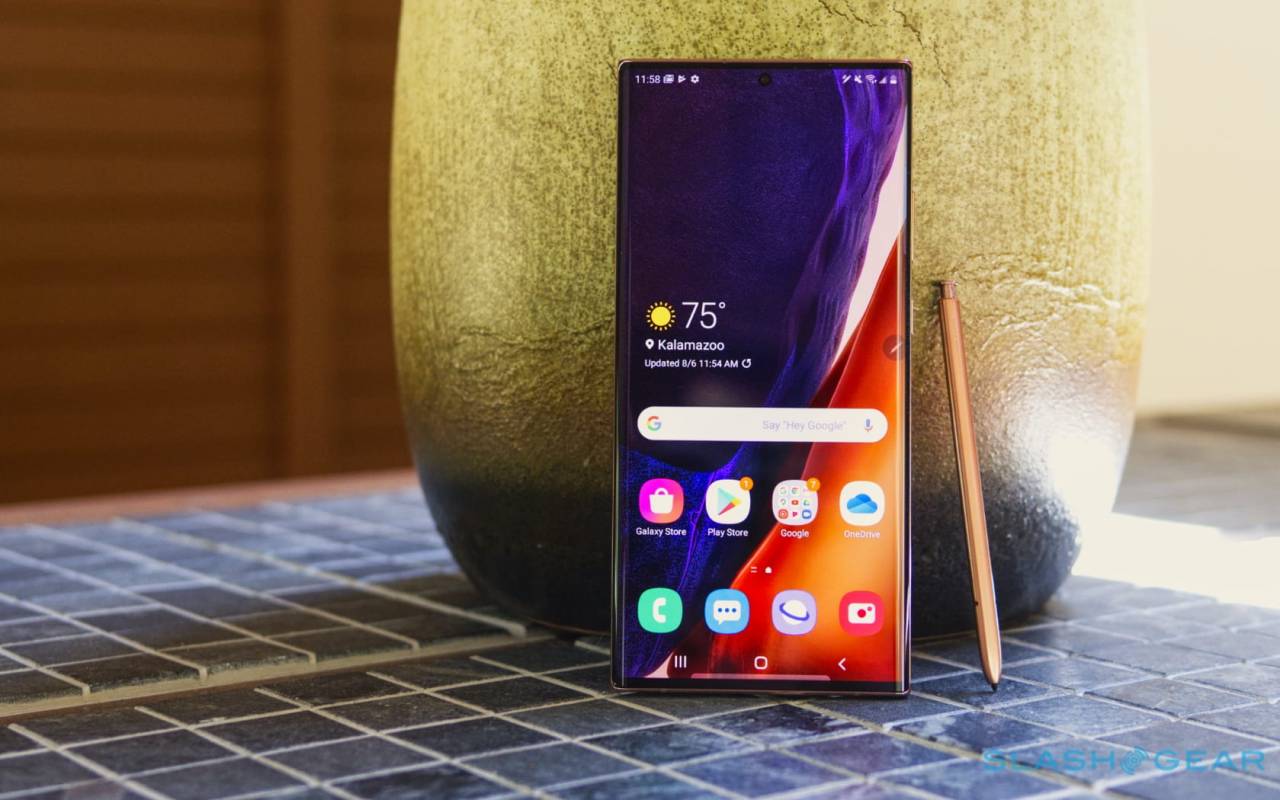 Perhaps being the first with the new S Pen experience is sufficient value to make that acceptable to you, but I suspect that for most people the return on being a little patient could be considerable. Not least because it’s tough to have as eager an appetite for four-figure smartphones in 2020, given the current economic climate. That seems only likely to fuel the deals we’ll see after the Galaxy Note 20 Ultra arrives. I won’t fault you for wanting to be there on day one, but it might be wiser to wait.