RIM should think Type not Touch for the new PlayBook

2011 wasn’t Research In Motion‘s year and 2012 is shaping up to be equally dismal one, with dramatic PlayBook price cuts paving the way for an underwhelming financial quarter. It’s easy to see why RIM went down the tablet route: the iPad made slates fashionable, and the Canadian company was stinging from criticism over its underwhelming touchscreen smartphones. The PlayBook was an opportunity to show that RIM could legitimately compete and perhaps even drive some ecosystem shopping in the same manner that iPhone users often pick up an iPad, and vice-versa. Yet in the process RIM managed to forget everything that gave it unique appeal in the mobile segment.

Whether from underestimating quite how demanding the tablet segment would turn out to be – blame, admittedly, that can be shared among most of Apple’s rivals – or rushing a half-baked OS to market, the PlayBook fell embarrassingly flat. What RIM had perceived as a coy ecosystem boost, making email and calendar functionality dependent on a tethered BlackBerry smartphone, was unsurprisingly perceived as a significant failing. The overall polish of the iPad was conspicuous by its absence, and RIM’s app store felt sparsely populated in comparison to Apple’s.

The ensuing price cuts and eventual $485m write-off are common knowledge now. Yet, had RIM kept its head and stuck to its existing strengths, the PlayBook debacle could’ve gone significantly differently.

BlackBerry’s reputation has always been about fantastic text entry. The company’s smartphones may not have been the best-spec’d, or the most attractive, but those who spend their days punching out message after message quickly grew to appreciate the trademark BlackBerry keyboard. RIM itself showed some understanding of that USP, back with its first touchscreen phones, even if the implementation was patchy. The SurePress haptic keyboard technology in the original Storm ended up turning off more typists than finding favor, but it was at least a sign that RIM recognized what made it special in the increasingly crowded smartphone segment.

How, then, might the PlayBook had fared if it was not a tablet, but an ultraportable notebook instead? If you’re thinking Palm Folio then you’re on the right lines, perhaps, or more recently Motorola’s Lapdock range of ultraportable alternatives. Motorola hasn’t detailed sales of its various Lapdock options, so it’s hard to know whether they’ve been a runaway success or a slow-burner, but RIM arguably has more of a reputation for polished text entry than Moto every did. 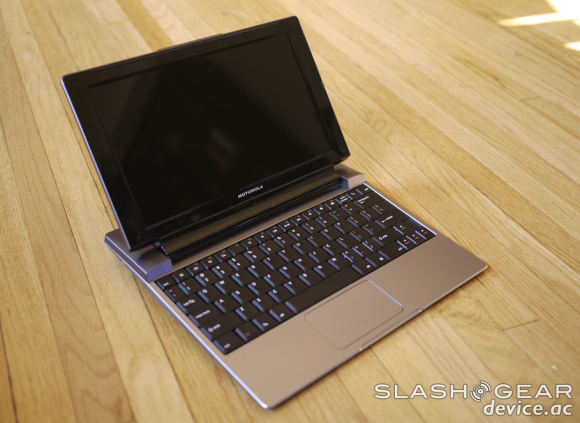 RIM’s target audience was going to need some serious persuading to ditch its laptop, and the 7-inch PlayBook was never going to do that. The company argued that it offered a more spacious way to triage a bulging inbox and respond to messages, but it could have done better providing a decent-scale physical keyboard paired with all-day battery life and a larger display.

Where the Folio and Lapdock are reliant by design on a smartphone, RIM could have given its PlayBook laptop a brain of its own. In fact, a 360-degree hinge as Lenovo showed on its YOGA concept last week would’ve allowed the company to tick both touchscreen tablet and solid text-entry ability boxes. Even as a regular ultraportable, RIM could have positioned it as a legitimate alternative to a full-sized notebook, rather than a third device to carry alongside your PC and your smartphone.

Unfortunately, it seems RIM is still driving ahead with its tablet ambitions. According to leaked roadmap information earlier today, the company has an eye on two new PlayBook tablets for 2012, initially a 3G-enabled 7-inch model, followed at the tail-end of the year with a 10-inch version toting 4G LTE.

Is the situation unsalvageable? Not necessarily. Lenovo has already borrowed ASUS’ battery-packing keyboard dock idea from the Eee Pad Transformer, so RIM may as well strike out with its own homage too. It’ll undoubtedly be bulkier than a true ultraportable companion device, but likely still smaller than the regular notebook the company could legitimately say it replaces.

RIM needs to stop trying to mimic Apple wholesale and instead focus on adopting the company’s more successful strategies: playing to your strengths, knowing your audience, and launching devices that set out exactly what they can do and deliver on it in a polished manner. The enterprise juggernaut takes a long time to turn around; that gives RIM more time to reposition than, say, a consumer-centric company. On the flip-side, though, should its business clients finally abandon it, RIM may discover it’s all but impossible to coax them back into the fold.