Motorola has since the first ATRIX device been pushing a mobile environment it calls Webtop, and here in one of two of its newest Webtop-based devices, the Lapdock 100, working in this world is a strangely enticing option. One of the set of tests I’m putting this Lapdock through is actually creating this post using the Lapdock itself NEARLY exclusively. I’ve not quite been able to bring myself to use it for any sort of image processing yet, but everything inside typing, highlighting, right-clicking, and the basics of blogging seem to be working just fine thus far. How’s this device hooked up with a Motorola smartphone work out for the rest of an everyday set of activities? We shall see!

Though I’ve got a couple of compatible Motorola devices to test with the Lapdock, unless otherwise noted I’ll be working with the ATRIX 2, a device that either also is or will be soon posted on SlashGear in a full review as well. One of the most instantly apparent differences between this Lapdock and the one that came out earlier this year with the original ATRIX is the amount of devices that are compatible. This new round of Webtop Laptops has a cord that plugs into the microHDMI/microUSB port combo that the newest round of Motorola smartphones have, and contrary to what we saw at the DROID RAZR release, the device doesn’t then just have to sit on the table. Instead, as you can see, there’s a rubbery-material-coated opening behind the display, right above the cord, that allows you to pocket whichever smartphone you’ve got plugged in. 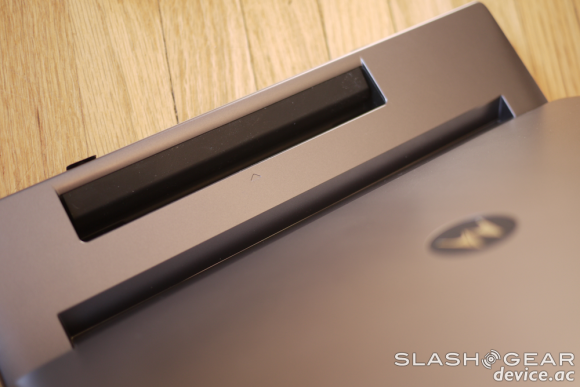 Thusly this Lapdock can hold and work with the ATRIX 2, DROID BIONIC, DROID RAZR*, Photon, ELECTRIFY, and future Webtop devices as well, though Motorola is only really promoting the Lapdock 100 as working with the Photon and RAZR for now. Make sure to bring your device in to wherever the Lapdock 100 is up and functioning in the store to check it out OR ask about your device specifically wherever you plan on purchasing it. Make sure!

UPDATE: The DROID RAZR certainly works with this Lapdock, but because it is such a thin device, it doesn’t sit properly in the rubber pocket in back. You’ll just have to have it rest on the table politely. 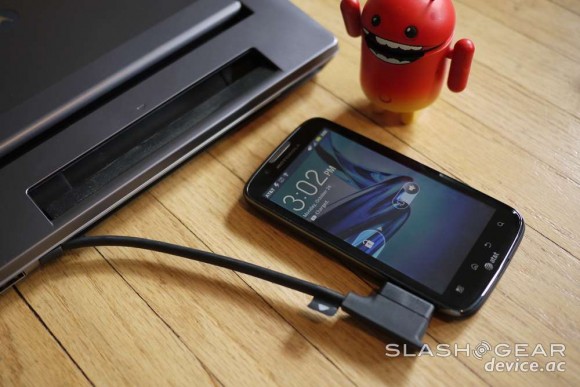 The Lapdock 100 is not a replacement for the laptop or desktop computer you already own. Instead, if I may be so bold, it’s an introduction of a new device that will have you considering how, when, and why you might want to use it for an amount of time before it’s able to be worked into your daily workflow (or playflow, if you prefer.) The closest device category to this, in my opinion, is the keyboard dock for attaching to a tablet. While Webtop is an interesting take on how Android can be utilized in the desktop space, it appears at the moment just to be a slight extension of what Android looks like on a Motorola smartphone. We’ll talk about that in a moment in the software section.

The laptop itself has the look of a device conceived of by designers who wanted to create something new rather than creating another flat plain slab as many laptop-making manufacturers have been prone to do as of late. It’s dark gray hard plastic and has a lovely incline which allows for the speakers to sit under the tent that is the near-back-end of the device. There’s two full-sized USB ports in the back for things like mice and USB storage sticks. There’s also a power port back there that’ll work with the cord you’ve been given in the package, and there’s a simple lock-hole on the left of the device so you can secure it at an event (or in your dorm room, if that’s your deal.) 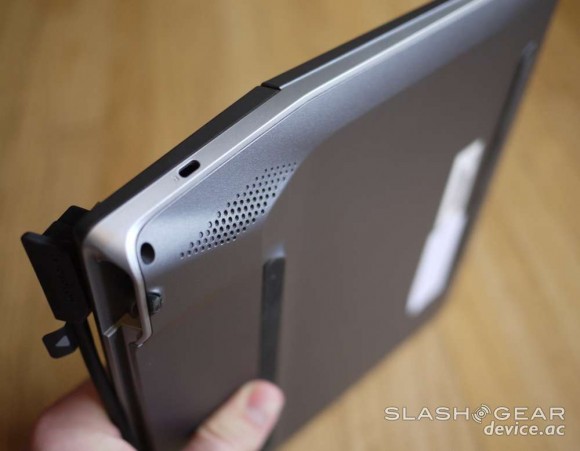 The keyboard has your regular full QWERTY set of keys plus volume keys, light and dark buttons for the display, play, next, back, and the Android home row of buttons that you’ve been seeing on your smartphones since the beginning: Home, Search, Menu, and Back. The keyboard itself has no space between any of the keys, making for a compact situation when typing. Because I’m used to a full-sized keyboard with a significant amount of space between each key, typing on this Lapdock doesn’t feel as natural as it should – but it’s not impossible. 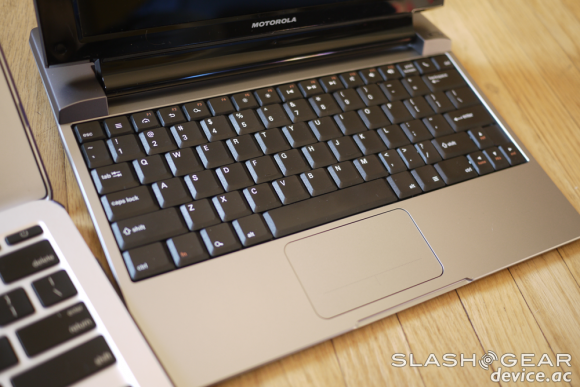 Similarly the touchpad below the keyboard works alright, but isn’t up to par with that of your fully-functional laptop. It works, but it can get a bit clumsy if you’re attempting to do something like play Angry Birds. That said, this Lapdock certainly isn’t made to make your gaming experience any easier unless you’re looking to play Zynga games and games from Kongregate, both environments available and fully functional via the full Firefox web browser. 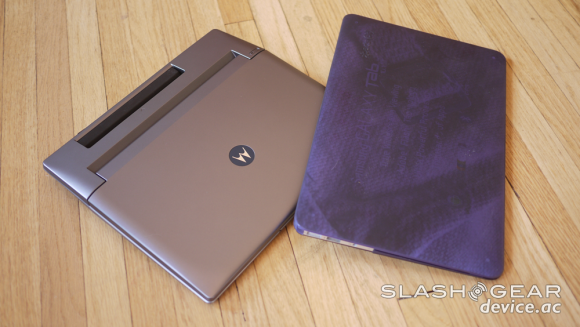 The speakers on this device, though they sit below the back and outward in a unique fashion, do not add up to full-fledged laptop speakers. The MacBook Air (which you see toting a SPECK cover in the photo above,) has speakers that blow the Lapdock 100 away. Similarly, though Motorola isn’t quite being specific with consumers about the display, I can say very unscientifically that it’s OK but by no means great. Viewing angles are at 90 degrees before getting a bit washed out, and again this is simply no match for any of the current MacBook range.

Firefox comes pre-installed and works just as well as you’d expect your Firefox browser to work in any environment, and therein lies one of the true strengths of this device. Like what you’d do with something like a Chromebook, you’ll more than likely gravitate toward the browser for most of your work and play here with the Lapdock as not just one whole heck of a lot of other apps work in the Webtop world. You can, however, also open your Android phone window up to full screen and essentially turn your smartphone into a non-touch tablet with a keyboard.

Webtop on the Lapdock will be used by those looking to see what’s possible with their Motorola phone, but unless they’re looking to make an extra effort to convert themselves to a whole new slightly slower functioning landscape here with this new piece of hardware, I can’t see anyone but Motorola super-fans being absolutely satisfied with this device. Webtop works to make Android appear to be much closer to a desktop operating system like Mac OS X, but because it’s so similar, it feels like its lacking.

The best use of Webtop here on the Lapdock 100 is to make a phone call while browsing the web. You can also do some quick texting with your keyboard while listening to music, and you can watch a movie on the 10.1-inch “high resolution” screen. The thing with this device is that it’s limited only by the device that you plug into it. It doesn’t work with just any ol’ device, you’ll have to have a Motorola Webtop-enabled device to use it, but it is truly the smartphone you’re working with here simply transformed by the bigger bit of hardware.

Do yourself a favor and try the Lapdock 100 out before purchasing it. It’s certainly not for everyone, but if you are planning on picking up one of Motorola’s many new Webtop-enabled smartphones in the near future, it is a neat option to have. Note that because you can also access Webtop from any display so long as you’ve got the right Motorola dock, this Lapdock offers just the ability to work in a mobile way where a dock would require you to use a separate stationary display.

This Lapdock works with most Webtop-enabled Motorola devices and is set to “likely” be working with future Motorola Webtop devices as well. Have a look above and below at the hands-on video and photos and feel free to ask any questions you might still have about the Lapdock below.