Kickstarter star Pebble will begin shipping today, the team behind the smartwatch has confirmed, with the production line currently pumping out 800 to 1,000 units per day, and initially focusing on the black finish. The wirelessly-connected timepiece – which practically stole the show at CES – will eventually be produced at a rate of 2,400 per day, though right now Pebble is busy trying to guide its iOS app through Apple’s approvals process, a delay in which means iPhone owners will only have limited functionality at first.

“We submitted [the iOS app] 2 weeks ago and have been responding to reviewer feedback” Pebble wrote in an email to backers today. “For the moment, iOS users who receive Pebble early will be able to do notifications/Music control but will not be able to install watchfaces or upgrade to the latest PebbleOS until the app appears in the App Store.” 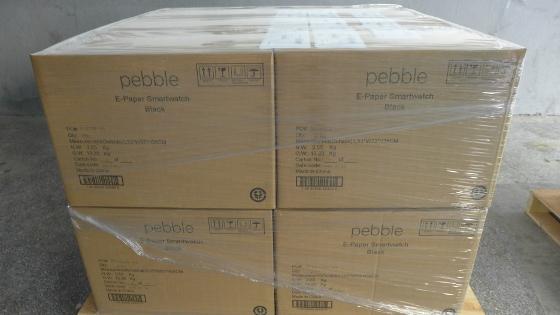 As for the Android app, that will arrive in the Play store tomorrow, Thursday January 24. Pebble has also set up a somewhat-whimsical “Is Pebble Shipping?” site, though the real meat of order tracking is yet to be enabled in the accounts page of the company’s site. It’s likely to be a heavily-accessed feature, too, not helped by the fact that the Pebble team apparently got too excited and sent out some “we’re shipping your order” emails prematurely. 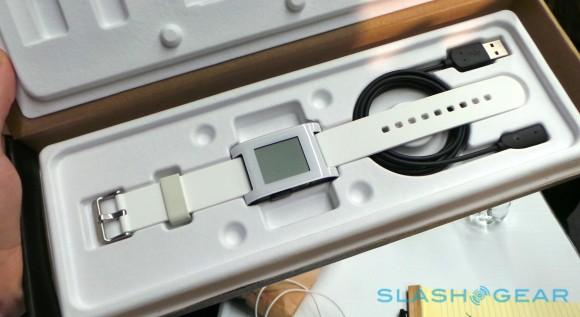 Those who ordered a black Pebble, and who are in the US, are likely to get their smartwatch first. Pebble decided to manufacturer “in large batches of 1 color at a time” and, since black was the most popular color among Kickstarter backers, that’s the hue they opted for first. Meanwhile, there’s some detail on timescale as to mass shipments and their frequency to each location:

“We are shipping master cartons of Pebbles by air freight across the Pacific to our US distribution center 1-2 times per week, and 1-2 times per week to our Hong Kong distribution center which fulfills shipments to any country that isn’t the US. There is a 5-7 day lag between a Pebble coming off the assembly line, and it arriving in a fulfillment center for shipping” Pebble

Finally, the team reiterated its intention to push out software updates every 2-3 weeks until the full set of initially promised features are enabled. More on the Pebble smartwatch in our interview with project founder and CEO, Eric Micogovsky.