Nintendo’s Wii U was the only next-gen console on show at E3 2012 last week, and the Japanese company didn’t disappoint with its new game lineup, tweaked hardware and ambitious launch plans. The dual-screen concept is still going strong, and making more sense the more titles Nintendo and its studio partners preview. We caught up with Nintendo to spend some more hands-on time with the redesigned Wii U and some of the key games.

In the months since we first played with the Wii U, back at E3 2011, the Gamepad itself has grown slightly wider and gained more tactile analog sticks than the sliding nubs of before. It also has a more ergonomic back panel – matte finish versus the gloss of the fascia – which makes for an easier, grippier experience, though we did still find ourselves accidentally hitting the lower shoulder buttons more often than we’d like. The front sticks are a notable improvement, though, and the touchscreen itself is still bright and reasonably responsive. 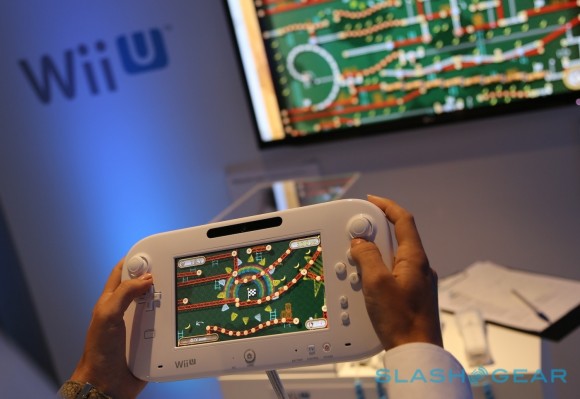 We also spent some time fondling the Wii U Pro Controller, the new “classic” style option to accompany the Gamepad and Wiimote. It’s a chunky thing to hold, but pleasant, and the buttons are nicely sprung. Unfortunately we couldn’t try out any titles with twin-Gamepad input, something Nintendo has confirmed will be possible (albeit with reduced touchscreen framerates).

It’s the games that are the most important element, though, and as you might expect it’s those that take the most advantage of the dual-screen option that feel most successful. Batman Arkham City Armored Edition, for instance, turns the Gamepad into the controller built into Batman’s wrist computer: it can be used to scroll through different mask scanning options, or see the camera from a remotely-controlled batarang, while on the main screen Batman himself is looking down at his wrist. Other times – as in other games we tried, like ZombiU – it shows a floorplan map or an enlarged view of the big-screen action.

Other titles use the potential for private viewing: Game & Wario, for instance, has a subgame that requires the Gamepad controller to navigate a secret thief, while other players watch their TV and try to identify them. Picking them out in the subsequent line-up is done by handing the Gamepad around, reminiscent of some sort of boardgame; it’s elements like that which will particularly appeal to families playing together. 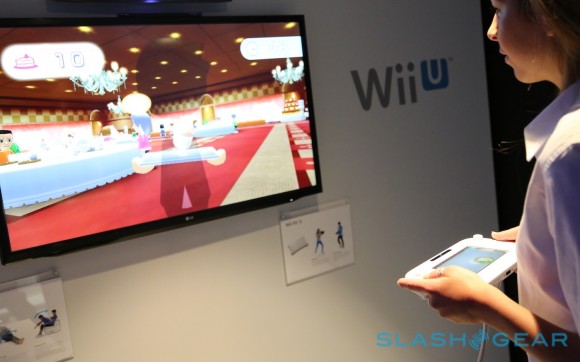 The Gamepad isn’t the only sensor-packed control that will be used. In Wii Fit U, the Wii Fit Balance Board is used for a new set of more arduous exercise challenges than in the previous version. In our video demo above, you can see a balance game where players have to physically run around a restaurant while holding a Gamepad “tray” steady.

The big challenge for Nintendo will be rival multi-screen systems like Xbox SmartGlass. Microsoft’s system has the advantage of working with a broader range of hardware – smartphones, Windows 8 tablets, PCs and notebooks – but presents a challenge to game developers who won’t know for certain what extra screens each player is bringing to the table. In contrast, every Wii U will have at least one Gamepad.

We won’t know for sure how successful the Wii U is – and how well Nintendo takes advantages of things like NFC integration – until the console launches at the end of this year. Based on our experience today, though, we’ve a feeling it will be another hit among casual gamers who might not normally go anywhere near a traditional console.