Nintendo has unveiled its next-gen console, the Wii U, and while the name may be vaguely familiar, the hardware has undergone a significant revolution. Gone is the Wiimote, to be replaced by tablet-style touchscreen controllers with their own front-facing cameras. We’ve been playing with the Wii U here at E3 2011; check out our first impressions after the cut.

If using the Wiimote was like waving a sword during gameplay, the new Wii U controller is like smashing your shield around. Demanding to be held in two hands, the dual analog sticks, D-pad and A/B/X/Y buttons are pushed apart by a 6.2-inch touchscreen; underneath are select, home and start buttons, along with a microphone, power button, battery indicator and stereo speakers, while along the top is a front-facing camera. On the corners there are shoulder buttons as well as two triggers on the back, while inside there’s a gyroscope and all the other motion-sensing tech from the Wii. 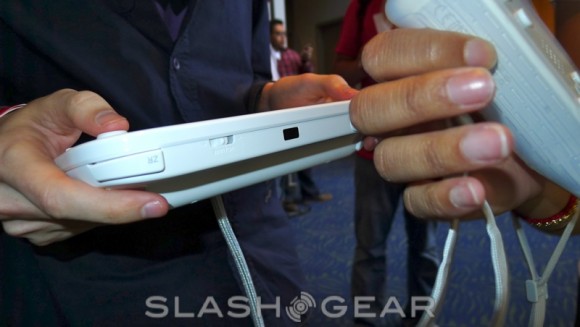 Hands-on, it’s an odd sensation initially. The display on the controller encourages you to look down at it, while the gameplay is of course mainly happening on your TV. In fact, the Wii U controller will work alongside the old Wiimote: Nintendo has games – which it’s describing as “samples” – where those with Wiimotes can play using a traditional split-screen view, while those with Wii U controllers get their own individual view on the unit’s touchscreen. No word on pricing yet, but we’re guessing the new controllers won’t be as cheap as the older ones, so that mixed environment makes better financial sense. 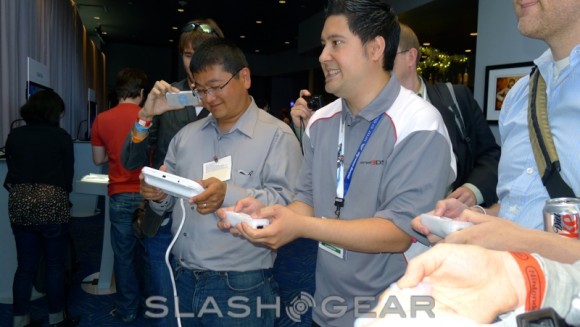 Gameplay is in HD, a welcome change from the Wii, though the controller’s panel itself doesn’t run at HD resolution. Connectivity from the core box, which looks like a slightly swollen Wii, is predominantly HDMI, with a slot-loading drive and a prominent “sync” button to get the controllers paired up. Old Wii games will work too, and there’ll be downloadable titles as well Nintendo tells us. No word on exactly how much internal flash storage there is, but there’s an SD card slot and USB ports for adding more. Meanwhile, the controller can also be used on its own, with the welcome coming into play as a video calling tool, and some titles playable on the controller alone.

The actual involvement of the Wii U controller’s various buttons and touchscreen depends on title. In Shield Pose, for instance, everything but the internal motion-sensors are bypassed, with the controller held up to block incoming arrows. Players have to periodically shake it to get rid of them. At other times, the gyroscope was used to change viewing angle, while the controller’s display showed a game map or a selection of tools and status updates, rather than cluttering up the TV. That initial odd feeling quickly subsides, with the Wii U feeling like a cross between an iPad game and the old Wii. 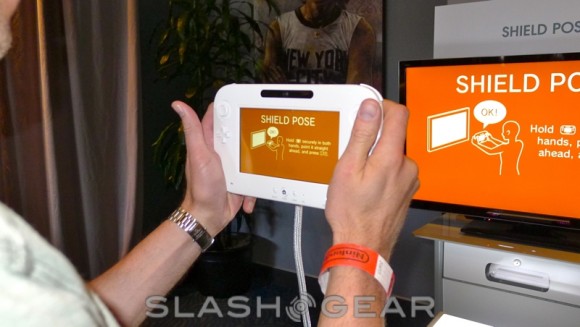 It’s still very early – Nintendo doesn’t expect the Wii U to go on sale until sometime between Q2 and Q4 2012 – but already the console’s unusual potential is clear. We’ve seen controllers with integrated screens before – SEGA’s DreamCast, for instance – but the sheer scale of the Wii U’s touch panel and the implementation of motion-control and HD visuals adds up to a degree of flexibility we’ve not seen from Microsoft or Sony. Nintendo’s own game demos have promise, but we can’t wait to see what third-party studios come up with too. The Nintendo Wii U may have delivered the HD upgrade we were hoping for the Wii, but more importantly it still keeps that splash of oddness that differentiates the company from its rivals. 2012 can’t come soon enough.