Nintendo Switch OLED VS Lite VS original: Buy by the screen

In the battle of values between the various Nintendo Switch models today, your focus will likely start with display size. The Lite has a 5.5-inch LCD, the original has a 6.2-inch LCD, and the OLED model has a 7-inch OLED panel. This larger model also comes with an improved kickstand, higher base storage, and it’ll cost you a little bit more money.

Skip if you already own a Switch

The Nintendo Switch OLED will cost you the most – it’s around $350 at the moment this article is set to be published. That’s $50 more than the original Switch, and $150 more than the Switch Lite – BUT, we’re going to go ahead and stop comparing to the Switch Lite here, since it’s basically a completely different device. See the section below were we expand on that.

The Nintendo Switch OLED is the same height and depth as the standard Switch and is 0.1-inch longer. The OLED model uses the same Joy-Con controllers as its predecessor. The OLED machine comes with 64GB internal storage right out the gate – double that of its predecessor, and the same quoted expected amount of battery life. 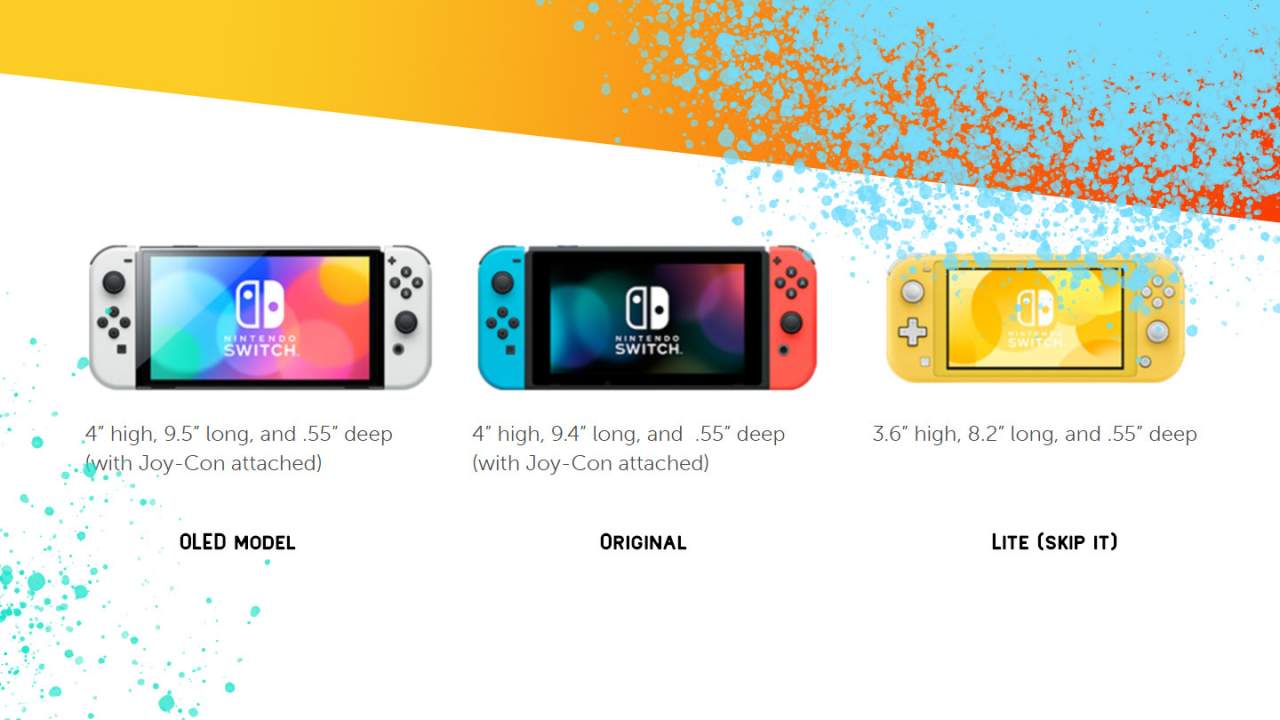 The larger display on the Nintendo Switch OLED covers a larger percentage of the total body of the unit. The size of the hardware isn’t particularly significant – as such, the panel feels more modern. In the past, it felt normal to have smart touchscreen devices with larger amounts of dead space around the display panel than we do in the most modern devices. This is a perfect example of a time where a company – Nintendo – can flex their ability to place a larger display panel in a machine that previously had a smaller panel.

Why to skip the Lite

We’ve got a whole bunch of reasons why you should avoid buying the Nintendo Switch Lite. Unless you’re looking to play a game you KNOW will work on the machine in a very specific sort of gameplay situation – with a very tiny display – you’ll do well to buy one of the larger devices.

SEE TOO: Nintendo Switch (OLED model) revealed – all the upgrades

The Nintendo Switch and Switch OLED have the same processor inside. It’s literally the same NVIDIA Tegra X1, codename Mariko (see comic book inspiration for names, here, for the past decade: Logan, Parker, Mariko (related to Wolverine, as well – and Erista. The slightly larger display did not necessitate a more advanced processor, it would seem. This means the output from the machine in TV mode, or docked mode, is the same as the standard Switch.

The Nintendo Switch Lite cannot play all the same games as the other Switch Models. It is a single unit, without compatibility with the dock, and without Joy-Con controllers – that means no TV mode, no Tabletop mode. See I regret buying the Switch Lite and you probably will, too. There you’ll find all the reasons you need to avoid this device.