The Motorola Edge+ (or Edge Plus, if you prefer) is one of the most interesting Moto phones released in years. It’s very tall and thin, works with a decent set of cameras, 5G connectivity, and a waterfall display. That means we’re not just getting curved left and right sides here, we’re getting a curved display that reaches all the way down to the side, beyond the point at which it’s functional. It’s certainly a beautiful phone – but is it necessary?

The Motorola Edge+ looks beautiful and feels like a reliable piece of hardware. Motorola is nothing if not a creator of hardware that feels like it’s well worth the price you’ve paid. This device’s build quality make its more idiosyncratic features feel like they’re intentional – and that’s a good thing, to a point. 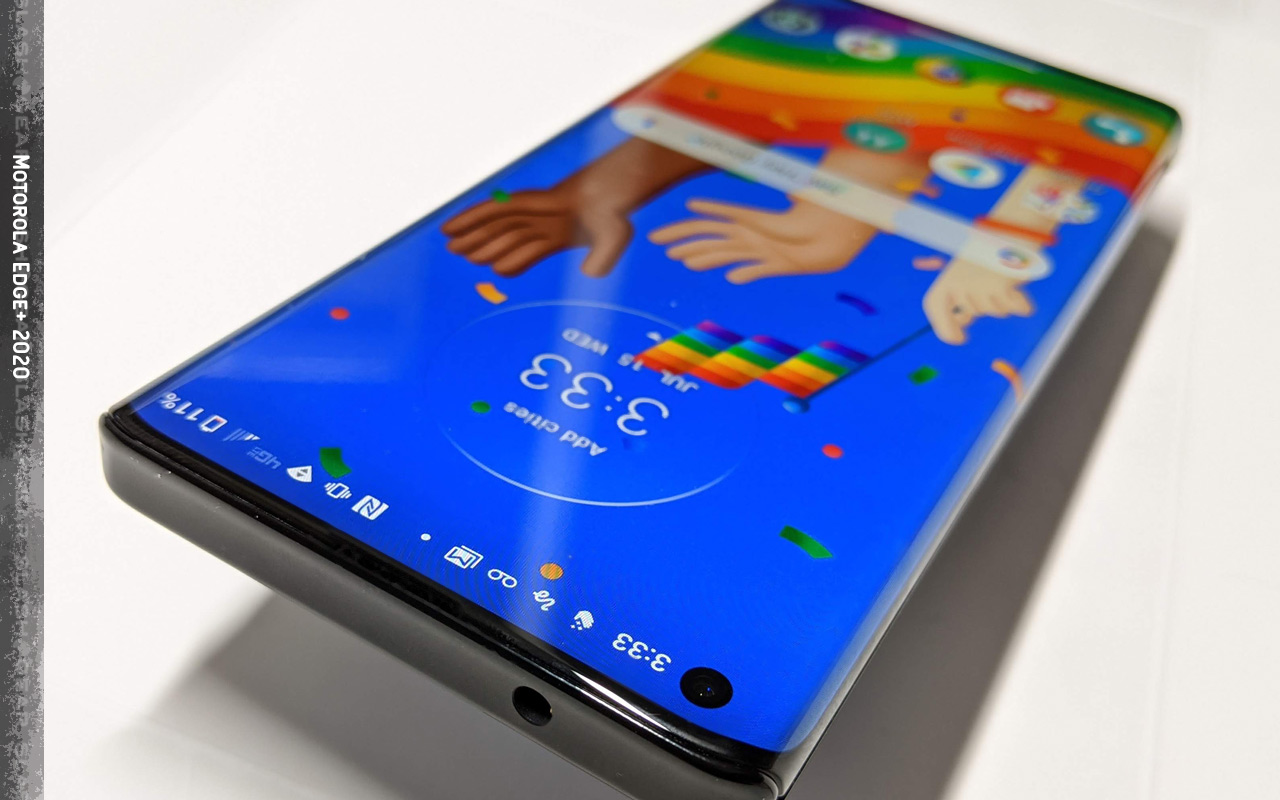 The display is gorgeous – it looks like a genuine peek at the future. But like most futuristic-looking pieces of hardware, intriguing quirks quickly turn into annoying quirks. In this device, the main issue is also the main reason why the consumer’s eye was caught. The curved edges of the display look amazing… but they don’t necessarily act in the best interest of the end user.

When I hold the Motorola Edge+ in my hand, my fingers wrap around the edges so that I might grip the device, so it does not fall on the ground. Because of the extreme curvature of the display’s left and right side, my fingers inadvertently touch the screen more often than I’ve found reasonable. 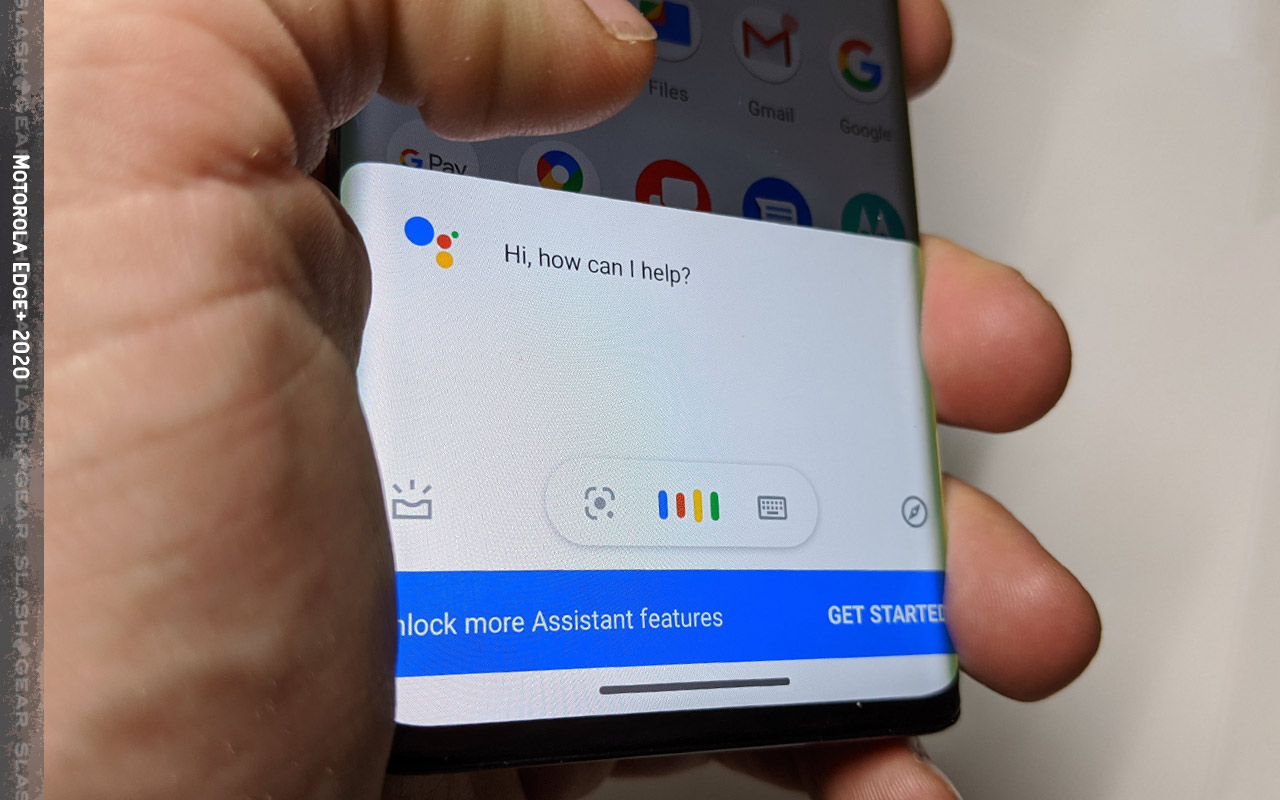 I cannot play landscape-oriented games on the Motorola Edge+ without using two hands to hold the shorter sides of the phone. For racing games, this isn’t an issue – but for games that require one hand for holding, the other for tapping, the accidental multi-touch situation quickly gets ridiculous.

I’ve had similar issues with curved displays in the past – especially when they’re made with glass or otherwise smooth, low-friction backsides. The Motorola Edge+ is so extremely slippery that I cannot imagine owning the device without a protective case of some sort. 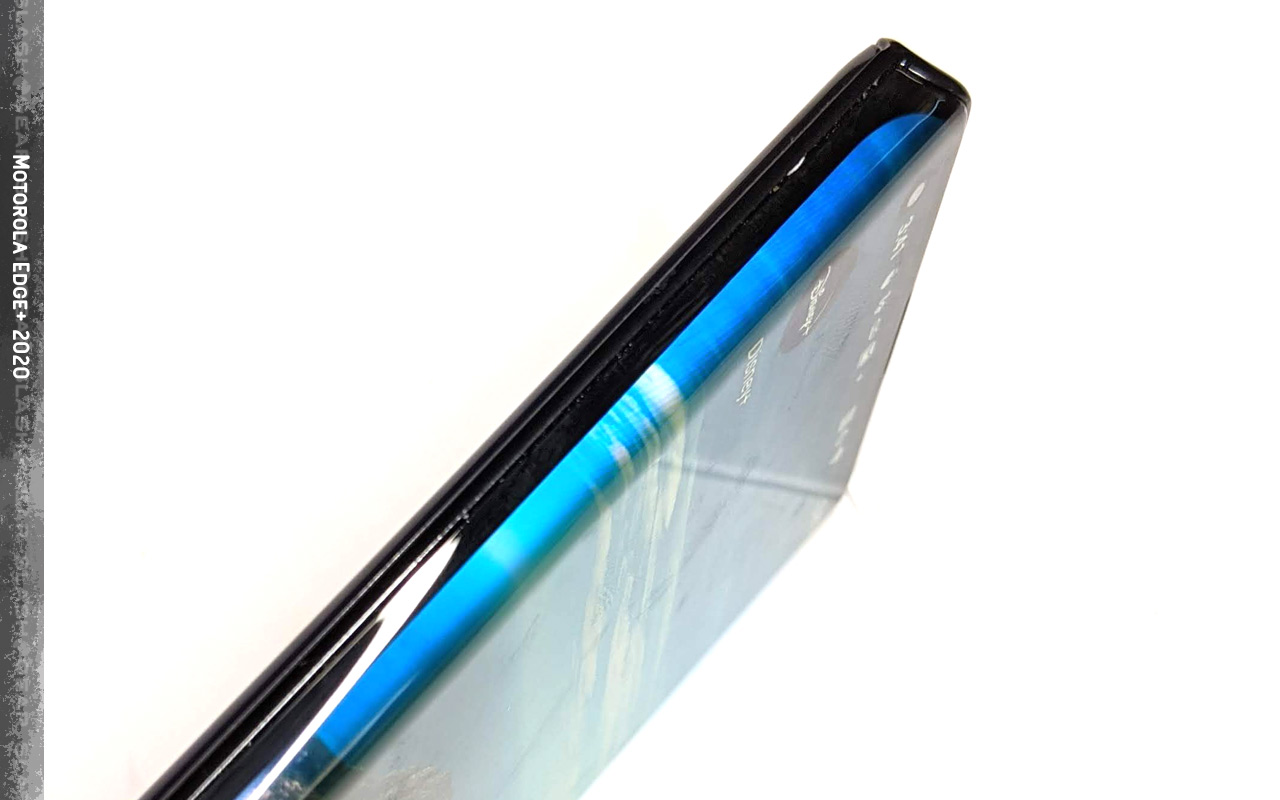 If I ignore the display gripping situation, I’m left with a smartphone that’s quite unique. We’ve seen devices with waterfall displays before, but never one made with the high quality build and reliable software package Motorola very often delivers with smartphones of all sorts*, even those that cost far less than the Motorola Edge+.

*With an exception every once in a while, of course. 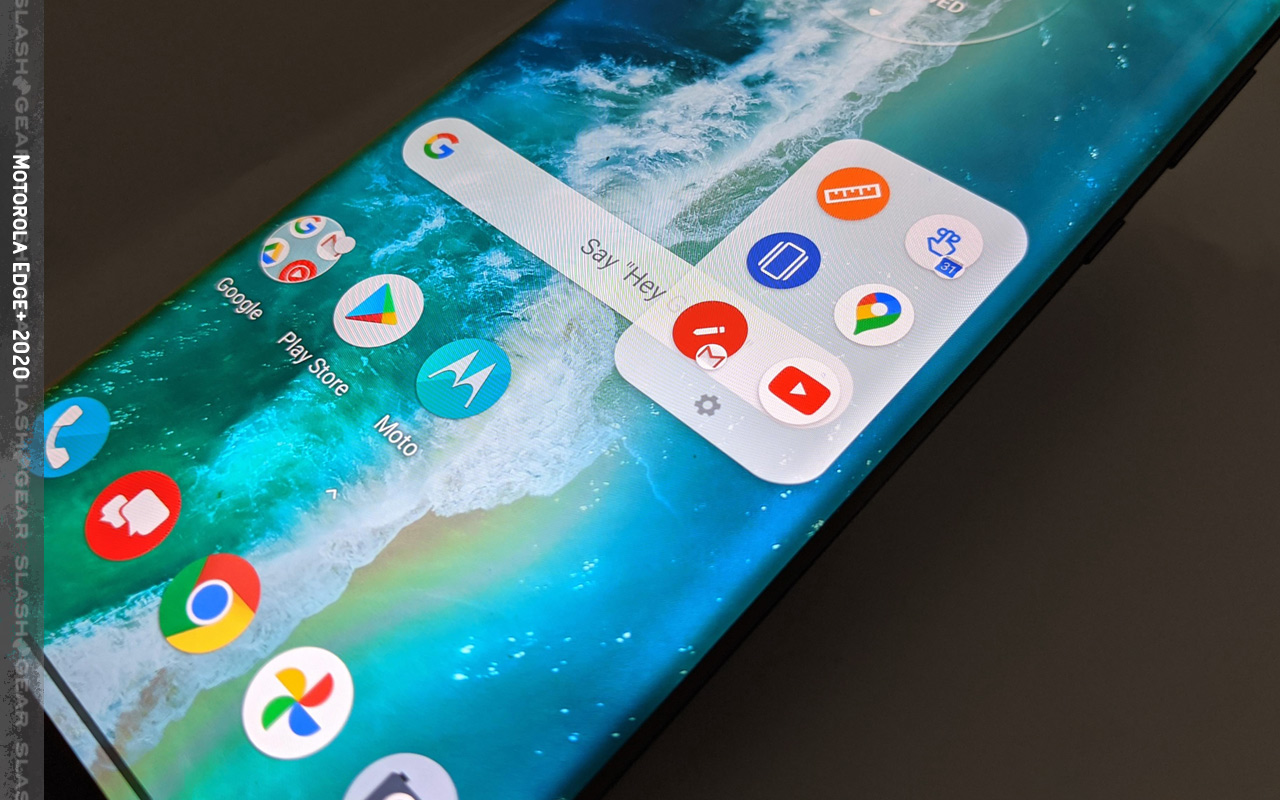 The display on the Motorola Edge+ is 6.7-inches diagonally with HDR10+ OLED tech and “nearly 90 degree wrap.” The panel works with 90Hz image refresh rate that can be adjusted (down to 60Hz) for battery conservation if you do so choose.

Barring the reported issues that’ve appeared on some units over the last few weeks, this device has one of the most amazing display panels we’ve ever seen. 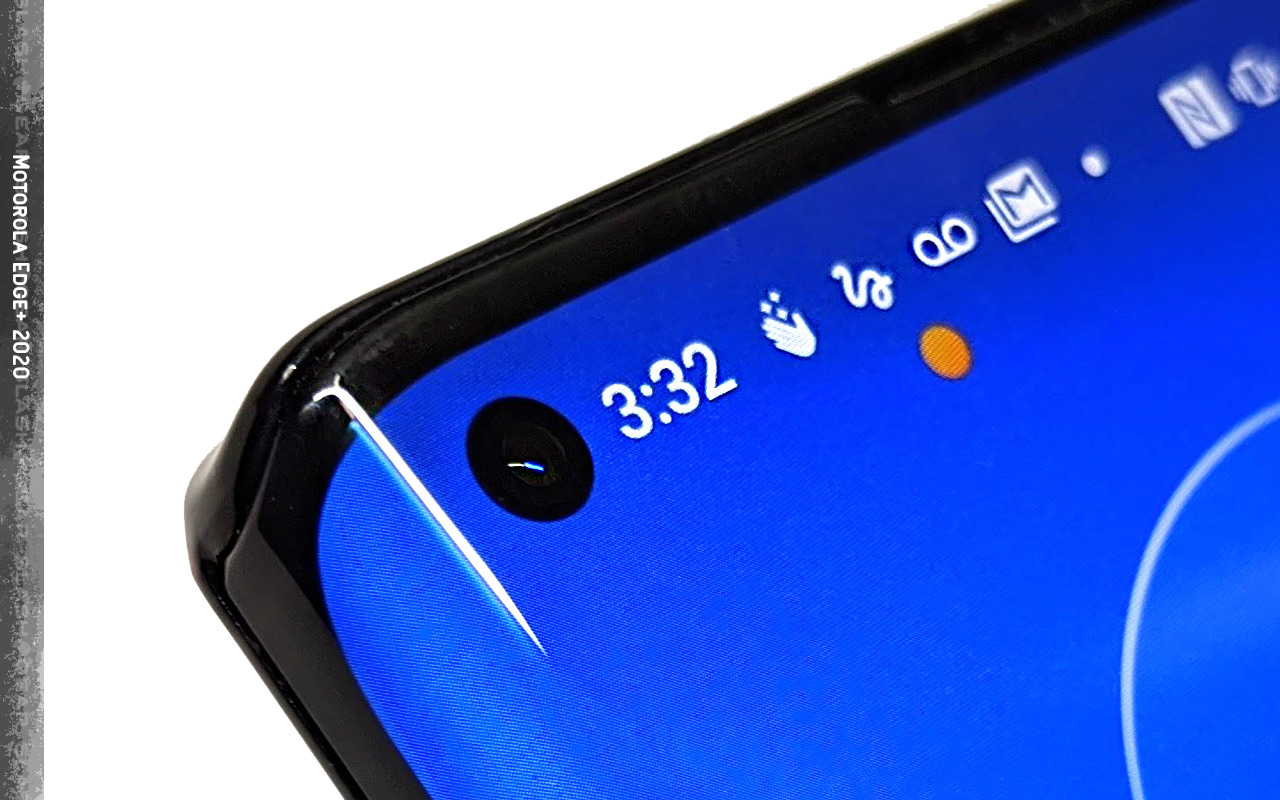 5G NOTE: At this time we’re not in a position to test any sort of 5G connectivity up here in Fargo, North Dakota. As soon as that changes, we’ll let you know!

This device has a standard 3.5mm headphone jack as well as two stereo speakers tuned by Waves. The loudspeakers sound incredible. While we’re still most impressed by Motorola’s work with JBL and Moto Mods speakers, the speakers that come integrated with the Motorola Edge+ certainly hold their own. 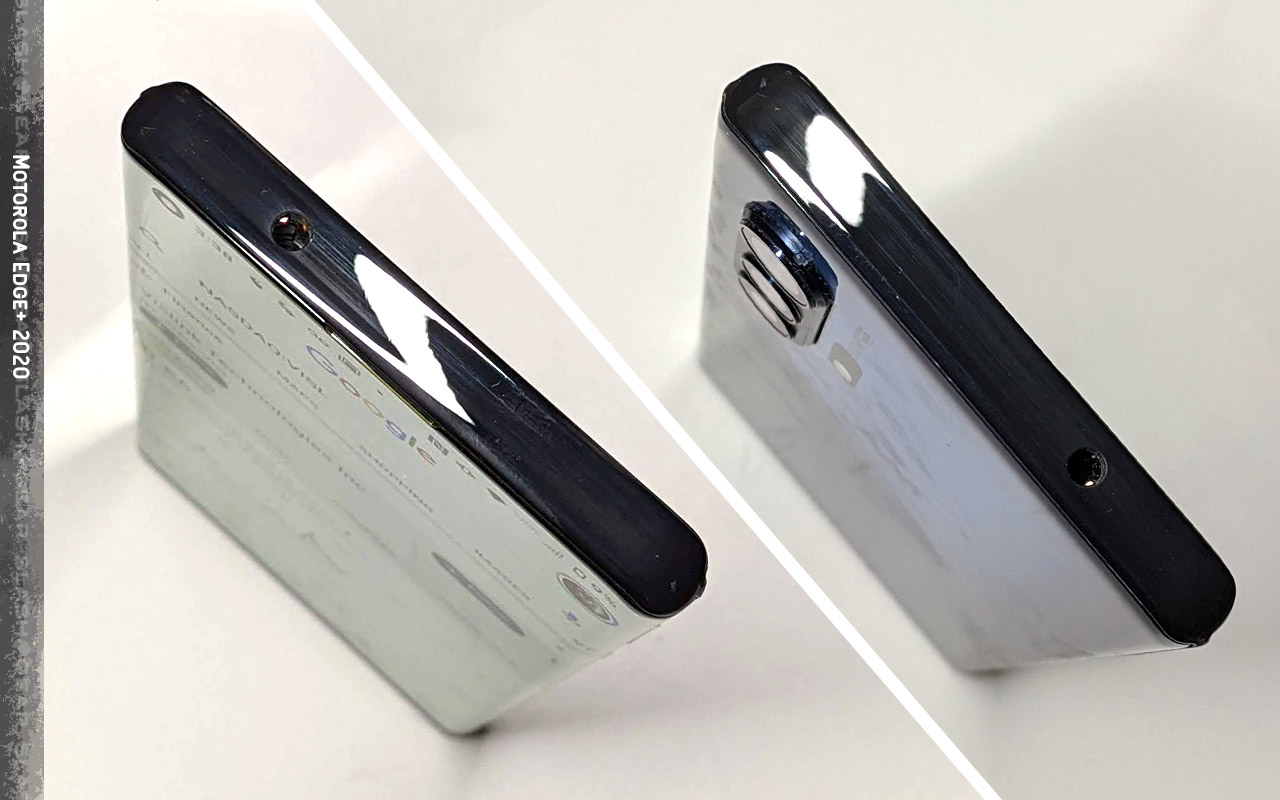 While I’d still rather all speakers – especially loudspeakers – faced forward rather than down, the speakers on this device are properly loud and powerful. Motorola’s choice to include the headphone jack here is a welcome rebellion against the biggest and most trendy smartphone makers on the market and their insistence on removing the still-perfectly-sensible audio connectivity port.

Motorola provides Android with their own ever-so-slight set of tweaks and an array of always-helpful features. Since the original Moto X, Motorola’s included features that set their phones aside from the pack. 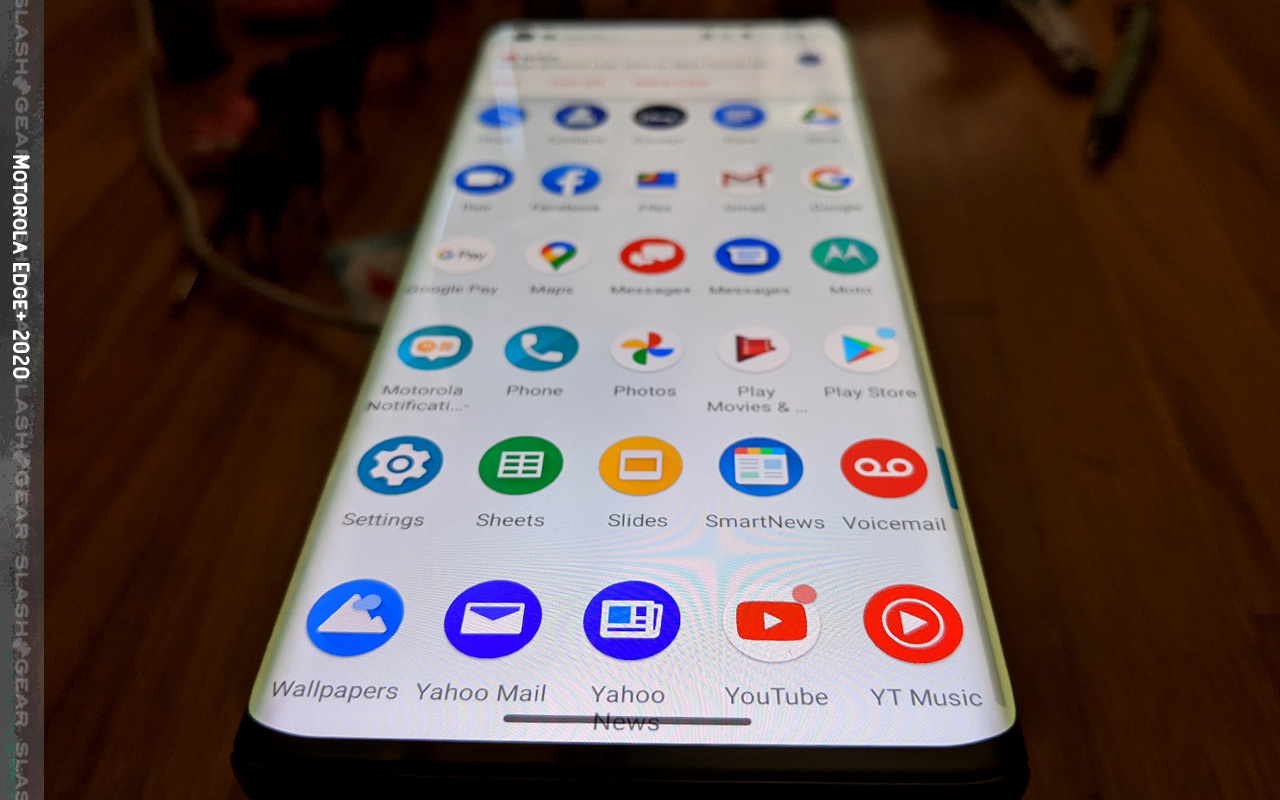 Every time I’ve used a Motorola phone in the past few years, I’ve utilized the wrist-flick to launch the phone’s camera (Quick Capture). Motorola’s “My UX” is a simple, yet highly effective system for home screen customization of fonts, colors, icon shapes, and the like.

This device also has Moto Audio for audio tuning, Moto Gametime for controls that activate whenever a game is opened, and a set of additional Moto Actions. There’s Fast flashlight, three-finger screenshot, pick up to silence, and a screenshot toolkit.

Motorola makes it a point to say they’re all about a “more pure version of Android OS” with “no clunky software skins” or “duplicate apps.” With that, the phone has access to all the standard Google apps that come with a Certified Android build from Google.

The camera array on the back of this smartphone includes three lenses. The lenses include the following, along with a 25MP (f/2.0, 0.9um pixel size) camera up front. 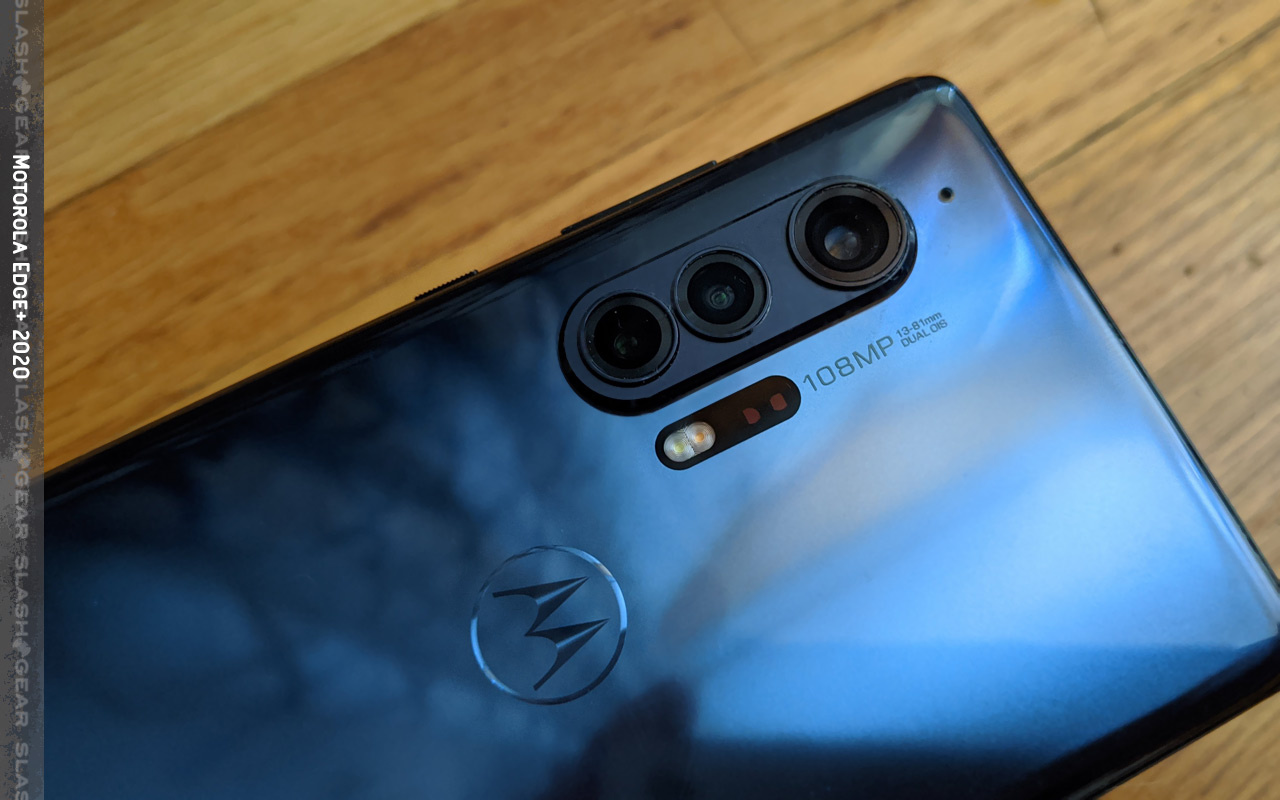 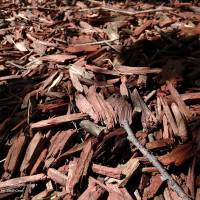 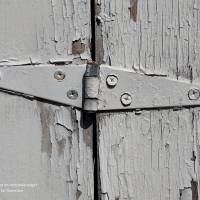 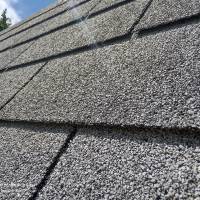 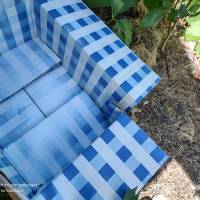 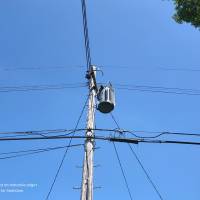 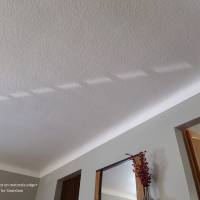 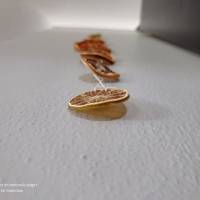 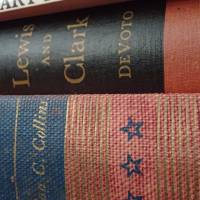 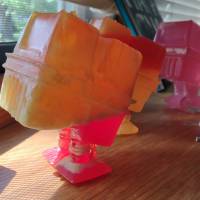 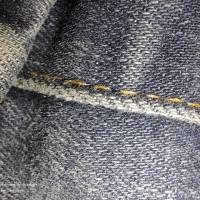 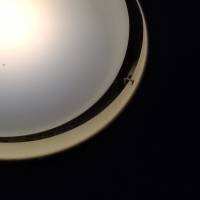 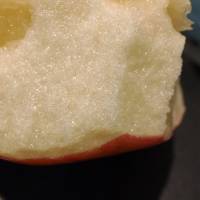 This device can capture some impressive photos, in basically every sort of lighting environment we’ve tested. Up close and personal we’re getting some excellent macro shots (with a dedicated macro lens), and photos in general are as color-accurate as we could ask for.

The Motorola Edge+ is working with the ability to digitally zoom up to 10x, capture photos in RAW format, and work with Google Lens right out the box. As you’ll see in the images above, Motorola’s camera app allows the user to automatically plant a customized watermark on every photo too. It’s not a brand new feature, but it is handy.

Battery life is extraordinary here – as well it should be, given the size of the battery. It was difficult to drain the power from 100% full down to nearly-empty in one 24-hour period. It’s possible, but extremely unlikely that you’ll need to charge this phone more than once a day. If you’re the sort of person who rarely uses their phone, and instead keeps it in your pocket just in case someone else needs to call you, you’re in luck – you’ll have a WHOLE LOT of battery life here. Standby battery life on this device is outstanding. 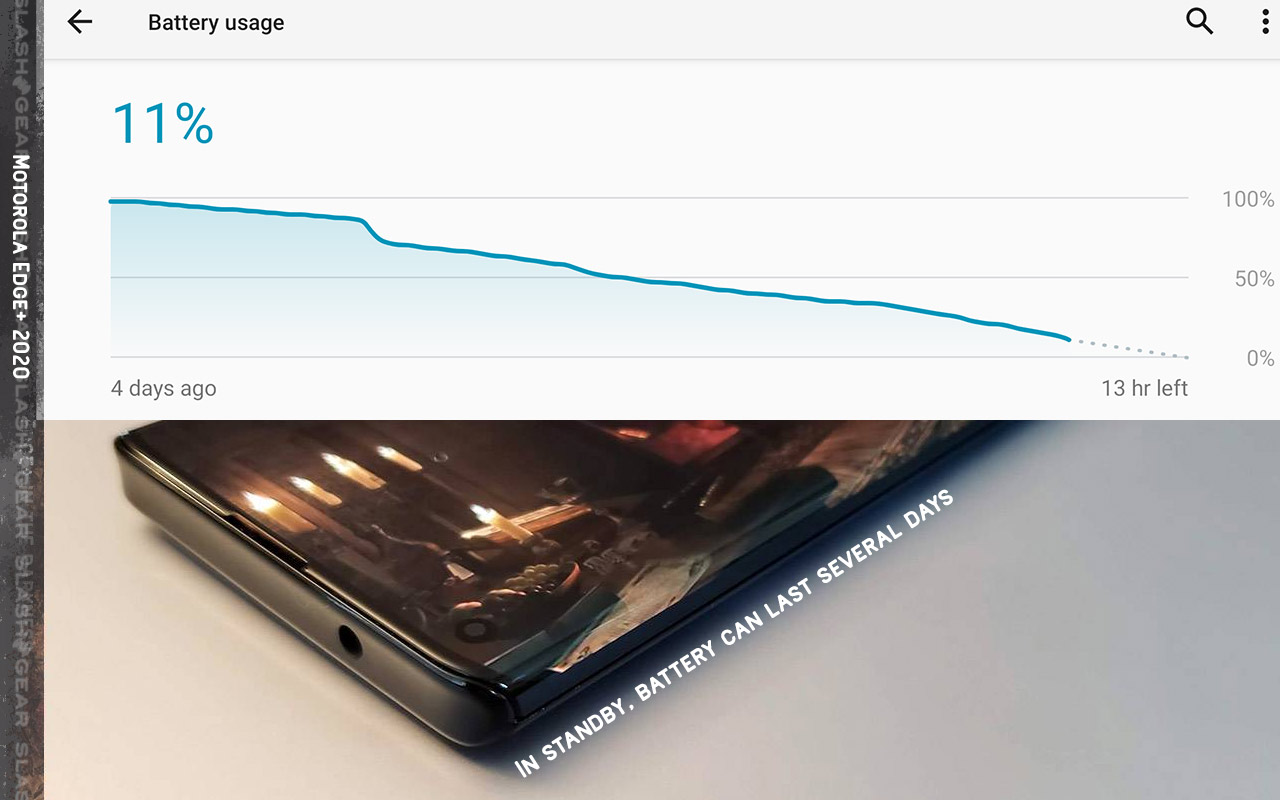 Wireless charging takes longer, but the charging system in the phone also allows power sharing. That means this phone can be used as its own Qi standard wireless charging power pad – so you can charge up your friend’s new iPhone.

The Motorola Edge+ is an impressive piece of hardware – certainly one of the most awesome Motorola smartphones ever made. If you’re looking for the most unique (and high quality) smartphone displays on the market today, the Motorola Edge+ should definitely be on your list. 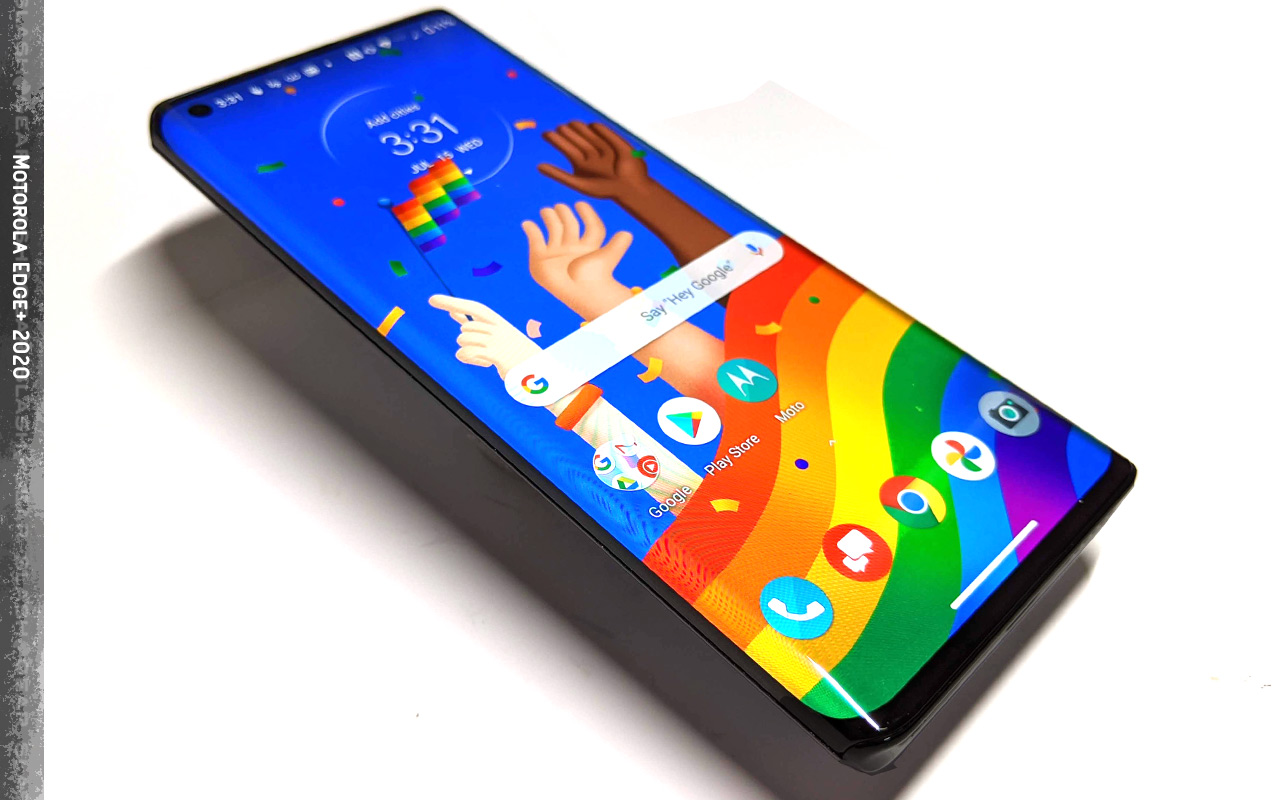 The Motorola Edge+ is available from Verizon now in two colors: Smoky Sangria and Thunder Grey (we’ve got the grey, here today). This device comes in one internal storage size iteration: 256GB, with a Qualcomm Snapdragon 865 mobile platform (SoC, chipset), with 12GB LPDDR5 RAM. Verizon has the Motorola Edge+ available for a retail price of $999 outright. You could also make monthly payments of $33.33 USD for 2 years (24 months).

I recommend you hold the Motorola Edge+ in your hand and see if you’re comfortable with this unique sort of display before you decide to buy. If you have trouble handling the phone due to the waterfall edges, this phone will not be your friend. If you find that you enjoy the unique build, this phone is fantastic. Just so long as you keep it in a protective case!