How much of a phone does $179 get you? As of this morning, and the Moto G, the answer is “a surprising amount”: the new Android handset doesn’t rely on carrier subsidies to bring its sticker price down, instead putting the Moto X on a diet and paring back the specs to hit the ambitious number. Today’s smartphone audience is an increasingly demanding group, however, and price isn’t enough to make a device succeed, so can the Moto G deliver more than just affordability. Read on for some first-impressions.

If you’ve handled a Moto X, the Moto G shouldn’t come as a huge surprise when you pick it up. You don’t get the same Moto Maker customization options as with the X – recently opened up across all US carriers – but that’s not to say there aren’t ways to individualize the G. 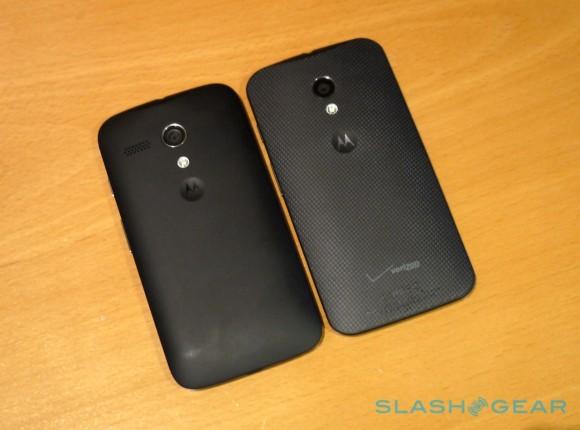 Motorola will offer multiple different colors and finishes depending on whether you want a sober phone for the office or a brightly-colored one you can easily find in a bag. Some will include integrated flip-covers to protect the front of the phone, too, as well as a mixture of glossy and matte finishes; Motorola told us they’ll range from around $5 to $30 apiece, features depending. Unlike the standard black Moto X, the black Moto G doesn’t have a pronounced texture to it, so it does pick up fingerprints quite readily.

The specifications make for interesting reading if you’ve got preconceptions about what a mid-range device offers. We’ve comprehensively compared the Moto G with the X already, at least on paper, but it’s hard not to be impressed when you’ve got the two phones in your hands. The cheaper Moto G feels just as sturdy as its more expensive counterpart, even given the fact that the back cover is removable, and the finish of the glossy plastic and the chromed volume keys is just as good. 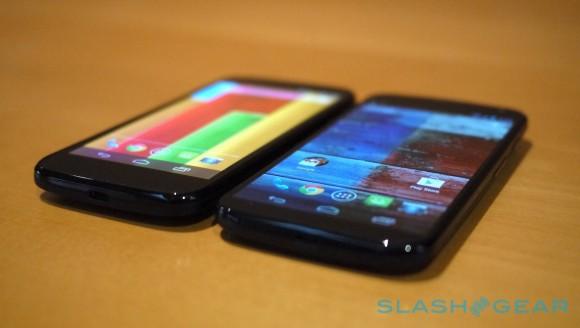 Up front, there’s a 4.5-inch display running at 1280 x 720 resolution: that’s actually the same number of pixels as you get spread out onto the Moto X’s 4.7-inch panel, making for a screen that’s in fact more pixel dense. In fact, Motorola is keen to point out, at 329ppi it has a higher pixel density than any other phone in its class; the iPhone 5c, for instance, comes in just short at 323ppi. Thicker bezels mean it’s actually around the same size overall as the Moto X, though.

Qualcomm’s Snapdragon 400 provides the grunt, a 1.2GHz quadcore paired with 1GB of memory and up to 16GB of onboard storage. That’s your lot, however; the back cover may pull off, but there’s no microSD card slot under there, nor a user-accessible battery; Motorola is promising “all-day battery life” but not talking much in the way of detailed numbers yet. Google will throw in 50GB of Drive storage good for two years.

The Snapdragon 400 may not be as fast as what you’d find in the Moto X, but it keeps Android 4.3 Jelly Bean running smoothly; a KitKat update to Android 4.4 is in the pipeline for the next few weeks, and by the time the Moto G lands in the US it should have been out for some time. Unfortunately, while it’s standard – and unmodified – Android on the Moto G, you don’t get the extra little enhancements that we liked so much about the Moto X. No semi-rousing the phone with a tap to the display to see the Active Notifications, and no twisting your wrist to quickly bypass the lockscreen and jump straight into the camera. 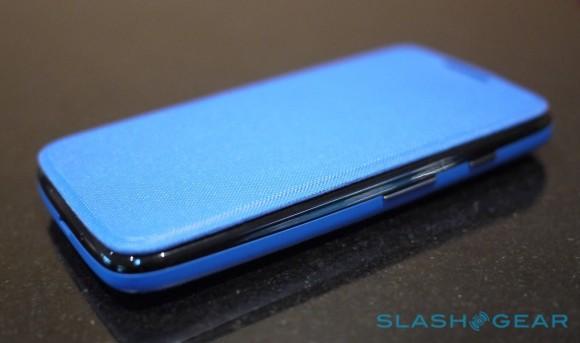 Most disappointing is the absence of “OK Google Now” speech control, which allowed us to leave the Moto X on a desk but still get the benefit of spoken search results, setting calendar entries and reminders, getting directions, and triggering phone calls, all hands-off. You get Google Now support, of course, but speech feels like something of an afterthought after having lived with the Nexus 5 and the Moto X.

Our disappointment on the hardware side is in connectivity. Motorola has opted to ignore LTE – arguably the development markets it sees the Moto G being the biggest hit in don’t have widespread 4G coverage – and instead the phone tops out at HSPA+. There’s Bluetooth 4.0 LE, and GPS, but no NFC. The absence of LTE makes it a tough recommendation (much in the same way that the Nexus 4 was) in more established markets like North America and Europe, however. 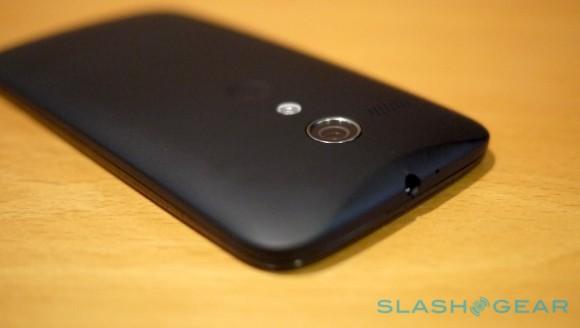 The camera performance is still something of a mystery for the moment, Motorola opting for a 5-megapixel sensor rather than the 10.1- of the Moto X. It’ll record 720p HD video – as will the 1.3-megapixel front camera – but not Full HD. Motorola is keen to point out the HDR mode it supports, too, though that’s not the same as HDR+ on the Nexus 5 with KitKat. Unfortunately we’ll have to wait a little longer to see image samples, though the app loaded quickly and took fast shots back to back.

Overall, it’s hard not to be impressed by what Motorola has achieved with the Moto G, even at this early stage. The phone may be plastic, but it’s reassuringly solid, and the display is a step above what we’d expect to see from a mid-range handset. The fact that it compares so well against the Moto X, still Motorola’s flagship, is enough to make you forget that it costs from $179. 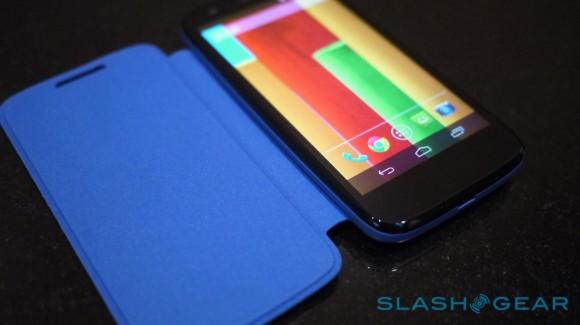 For the US and Western Europe, it remains to be seen whether the Moto G’s missing LTE and low-spec camera will sour the deal. Still, the Nexus 4 missed out on 4G and never really impressed with its camera, but was still hailed as a success for Google, so perhaps Motorola will get similarly lucky. We’ll know more when review units land.