Meet Volkswagen I.D. – The EV future VW is betting on

It’s been a tough year for VW, but the German automaker is using “dieselgate” as a launching point for an ambitious electrification strategy detailed at the Paris Motor Show 2016 today. First in Volkswagen Group’s EV assault is this, the VW I.D. Concept, a preview of the roughly Golf-sized, all-electric car it aims to have on the market by 2020 and – if all goes according to plan – have autonomously driving around cities by 2025.

It’s certainly a striking concept. The I.D. is around six inches shorter than the Golf, but the design is distinctly different, particularly in its use of lights. In fact, VW is hoping to give the car some personality that way: the LED headlights, for instance, will “look” at the driver as they walk up the car, or “close” to a narrow strip when the car is parked.

Their light profile will change according to how the I.D. is being driven, too, getting progressively more aggressive in shape as the EV is pushed harder.

Blue light panels in the diffusers and side sills pulsate while the I.D.’s battery is charging; they’ll also be used in autonomous mode when that’s enabled, along with blue illumination of the laser scanners mounted on the roof. The same emotive headlights will glance left or right ahead of a turn, to give pedestrians and other road users more of a hint as to the car’s intentions; they’ll also be able to make “eye contact” with pedestrians at the curb, to make clear that the computer has spotted them. 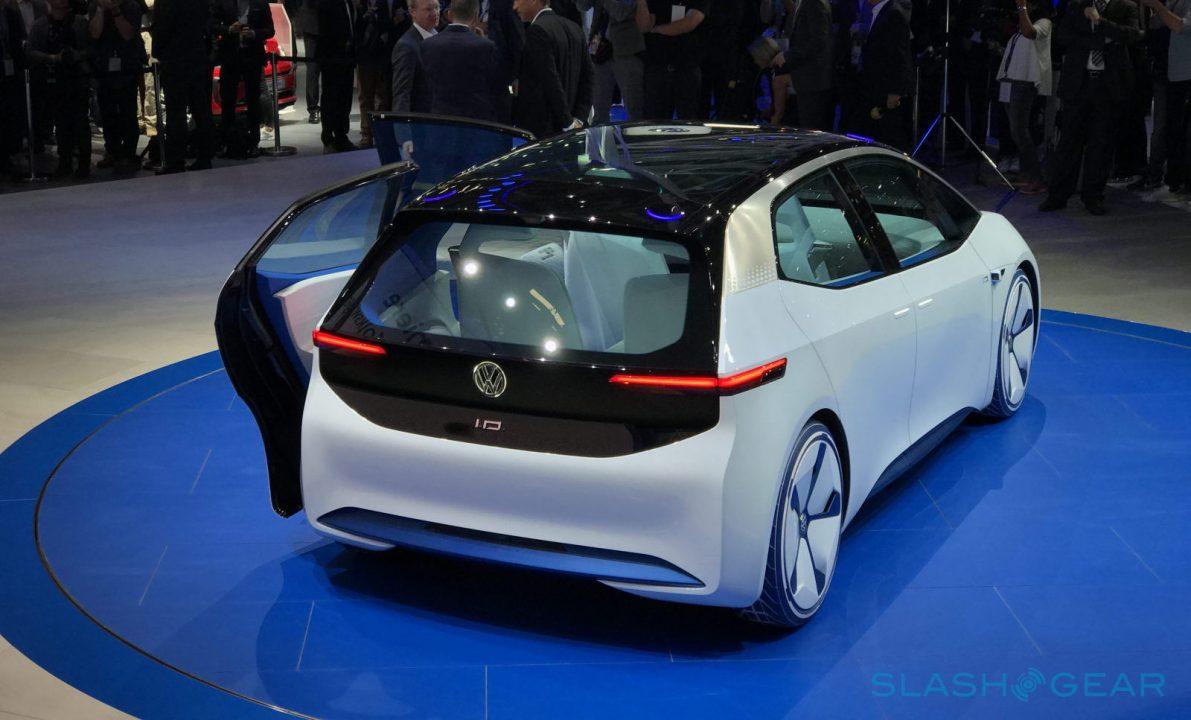 This isn’t VW’s first electrified car, of course – the automaker has the e-Golf for instance, while other marques in the Volkswagen group have EVs and hybrids of their own – but it’s the first to be built on a dedicated electric platform rather than a retrofit of an existing design.

VW has dubbed that the Modular Electric Drive Kit (MEB) architecture, and it’s tailor made for the complexities – and the advantages – that all-electric powertrains involve. Since there’s no chunky, heavy engine under the hood, the MEB can keep its overhangs very short while maximizing the wheelbase length: that combines to a much tighter turning circle than you might expect, as well as far more interior space than you’d get in a gasoline car with a similar footprint. 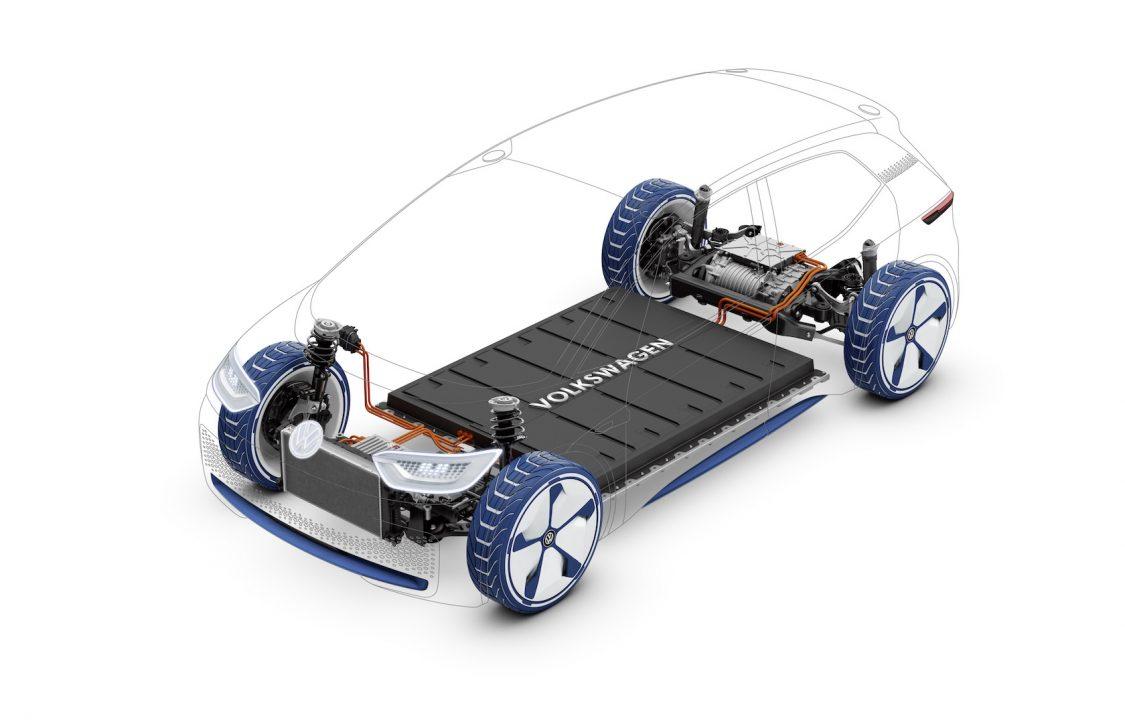 Meanwhile, the lithium-ion battery pack changes the MEB architecture’s dynamics considerably from a gas or diesel car. Integrated into the floor, it means the center of gravity is low and the overall weight fairly evenly distributed between the axles. The drive unit itself is integrated with the multi-link rear axle, while the decoupled subframe lends acoustic separation.

As it stands, MEB’s drive unit has 125 kW or 168 horsepower, for a sub-8.0 second 0-62 mph time and a top speed of 99 mph. That’s not going to give a Tesla sleepless nights, but VW is clear that the setup for the I.D. is only one possible configuration: other MEB-based cars could have different battery capacities and more or less powerful motors.

That way, range could be varied from the 249-373 miles the I.D. can do in VW’s testing, as well as the overall price. 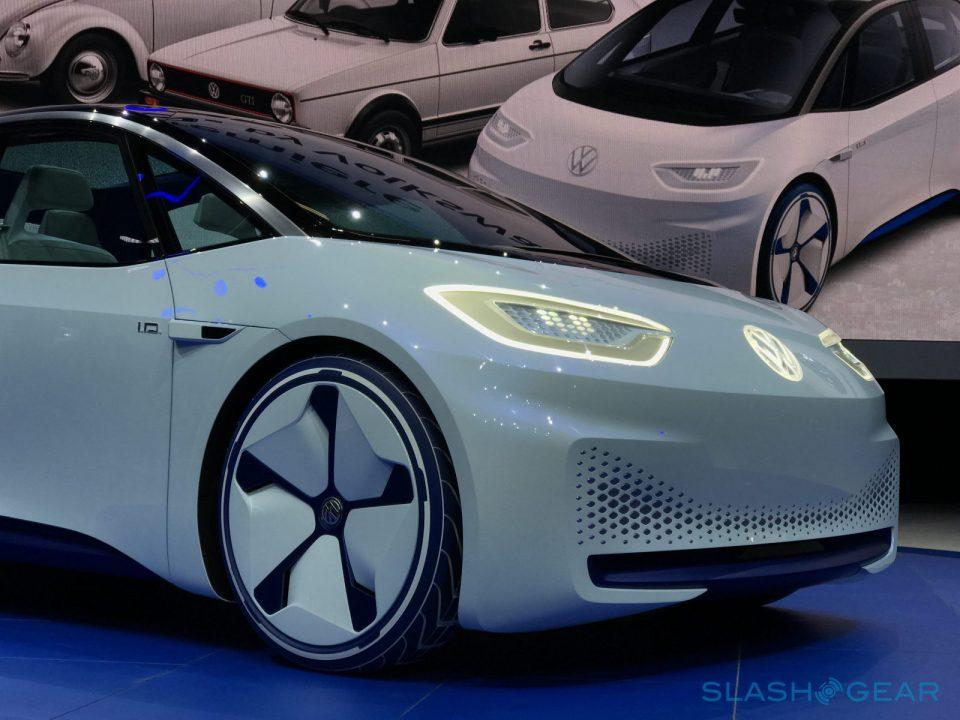 Charging, meanwhile, is either via a traditional cable or through inductive charging. The latter involves simply parking the I.D. over an inductive plate – the car guides the driver in positioning it properly, but also supports autonomously finding the plate itself – and VW says that, with rapid charging, you could have 80-percent of a charge in 30 minutes time.

Although MEB may be the technological architecture, it’s part of an overall platform for next-generation transportation that VW is putting its money on. That includes the Volkswagen ID, which the automaker says all owners and drivers will set up when they buy or lease a car.

It’ll act as a memory preset for seat and HVAC settings, with the user identified by their smartphone, as well as favorite radio stations and songs, how you like the audio system tuned, and your navigation favorites, but it’ll go further than that, too. The ambient lighting of the car will be adjusted per Volkswagen ID, for instance, along with contacts for friends and colleagues that are automatically loaded into the infotainment system. 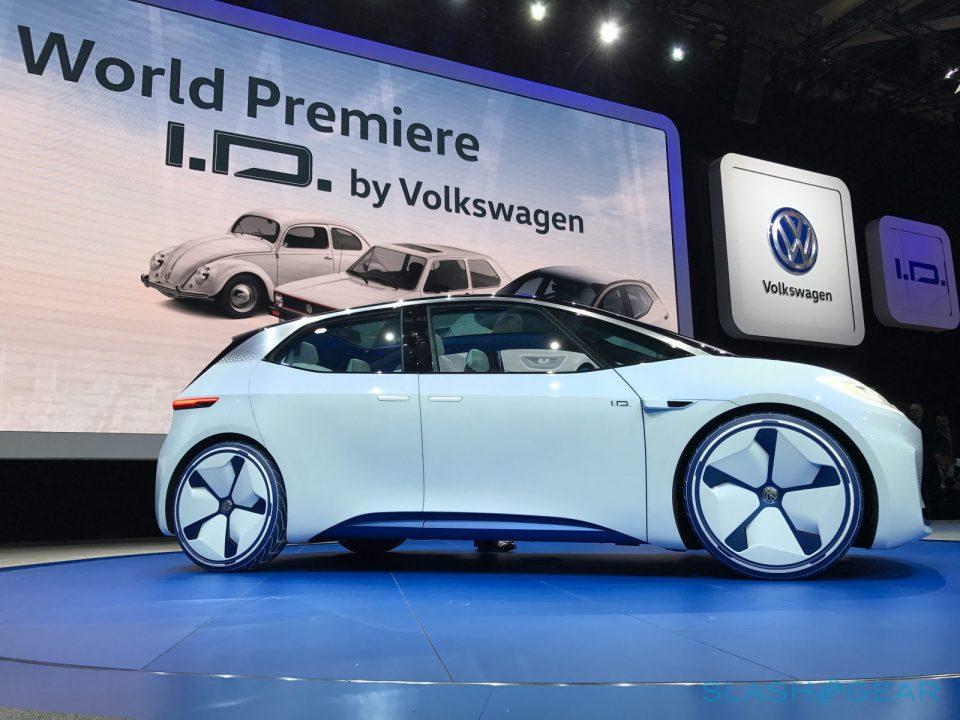 However, Volkswagen ID will also go beyond the car, courtesy of Volkswagen Home-Net. The company has talked about that before, around the BUDD-e electric microbus concept, and it’ll be part of I.D. and other electrified vehicles too: you’ll be able to stream video from home security cameras to the dashboard, as well as remotely unlock the car with facial recognition. 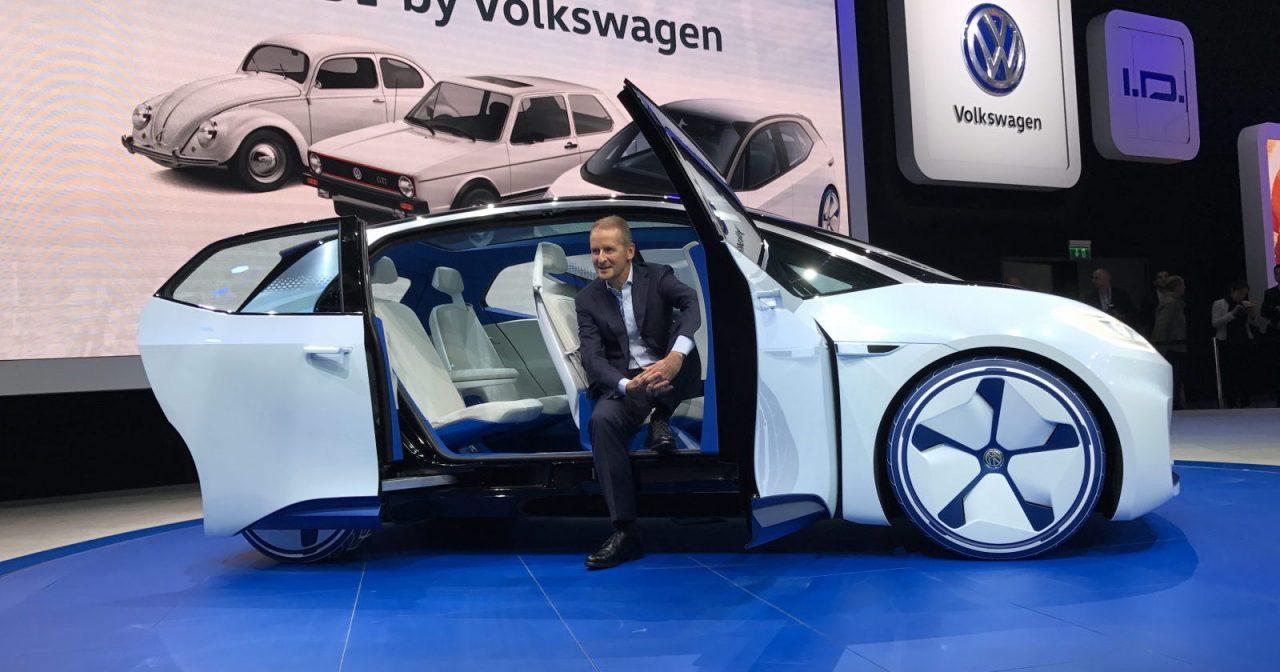 Volkswagen ID will also be the virtual key for parcel deliveries, with couriers granted temporary access to a car’s location and permission to open the trunk to leave a package inside. The automaker says it’s currently working with international logistics service providers to bring this to market.

With the rear seats lowered – they fold completely flat into the floor, for a van-like cargo space – and taking into account the various cubbies and boxes, the I.D. offers 33.9 cubic feet of luggage space. More noticeable, however, may be the Möbius strip-inspired twist to the cabin’s design, which encompasses an electrochromatically darkened, panoramic roof.

The steering wheel – which retracts when the I.D. is in autonomous or “I.D. Pilot” mode – has the transmission controls in the center, along with capacitive buttons for turn signals and infotainment control. There’s a head-up display with an augmented reality interface, overlaying navigation arrows atop the roads and lanes they refer to, plus a 10-inch display showing all areas of the car’s systems.

That panel is actually made up of three transparent layers: the lowest shows navigation, the middle pulls in Volkswagen ID content, and finally there’d driving data like speed and range on top.

How much of this will make it to the production model? That’s the multi-million dollar question, or at least one of them that we still have: VW is also yet to confirm pricing for the road-going I.D., though it has said it should be “on a par with comparably powerful and well-equipped Golf models” which could suggest starting around the $30k point.

That would put it up against the Tesla Model 3 – which will have already been on sale for at least a couple of years by the point of Volkswagen’s 2020 launch goal for the I.D. – and Chevrolet’s Bolt EV, which goes on sale later this year.